A Stopover in Texas and a Fulltiming ModeTransition

We had been dreading our departure from the cool Colorado environs where we spent the summer. We were fully aware of the late August heat we would encounter as we slowly watched the altitude unwind on the GPS as we left the picturesque mountains behind.

Our first night's stopover was in Roswell and, noticing the 99-degree reading on Phannie's OAT gauge, we braced ourselves for the furnace-like blast when we opened the door on arrival and stepped outside. And yes, it was just as we feared. We almost stumbled as we tried to catch our breath.

This was not the end of the unpleasantness, however. We were immediately besieged by a swarm of houseflies so numerous that four of them flew into the coach before I could even close the door. I'm not sure what was going on with the flies in Roswell--maybe there was a housefly convention or something! But it was bad. Really bad. After we left, it took us a day or two to find and swat all of the little varmints. We lamented to each other how pleasant it was in Hawaii and Colorado, where flies were almost nonexistent.

The next day, I decided to drive all the way to Killeen, Texas, where we were to attend a 50th anniversary celebration of longtime friends, Rev. and Mrs. John Abbey. We had a great time with this wonderful couple and their family, agreeing that our time with them was much more important than our constant whining about life's little discomforts: 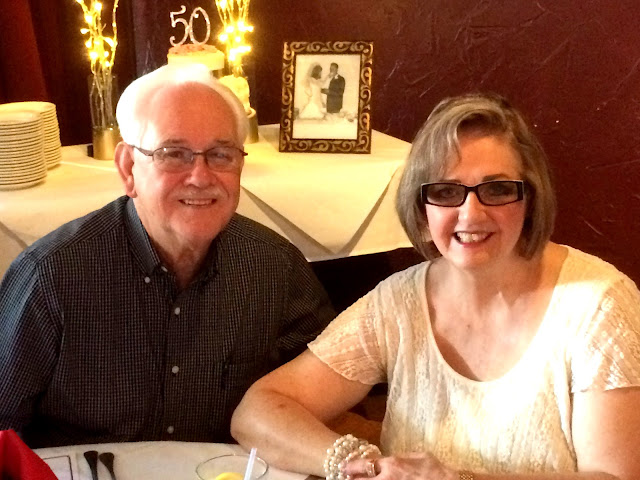 Arriving in Killeen from Durango, Colorado was the culmination of two 500-mile legs in Phannie with only one overnight stop. This represents about twice the normal distance that we usually travel in a day, and I think it represents a change in our philosophy about what our travel days will look like going forward. But I also think this is part of a new paradigm of sorts from fulltiming 'vacation' mode to fulltiming 'destination' mode.

This change in travel modes among fulltimers is a very common phenomenon, we have learned; in fact, it is almost a rite of passage. Put simply, it is a shifting of new fulltimers' priorities away from the usual frenetic pace of travels at the beginning of their new taste of freedom. Being unfettered then by obligations at work, they typically think they have to get out there and see everything at once.

However, as they begin to check off more and more of the myriad places that have been on their bucket list, they realize that a more measured pace perhaps yields more satisfying results, so they slow things down and begin to spend more quality time at fewer stopovers. Maintaining a furious pace of driving, then setting up and tearing down at campgrounds can be exhausting and, after doing this for a while, you begin to realize this isn't exactly fun any longer. This is why vacation mode is usually not sustainable over a long period of time.

Having said that, I have determined that a 500-mile driving day is too much, even though Phannie doesn't really tire me out. The comfy captain's chairs and air ride suspension make for a very pleasant driving experience. However, we know better than to push ourselves beyond what is a safe limit, but we are likely to make longer legs than we used to--especially if our stopover is at a place we have already been or that holds little interest for us. So, it seems we are definitely getting into a 'destination' mode; we want to get where we're going and stay there a while.

We had to hurry to Conroe and participate in another round of doctor checkups to get prescription refills before we depart for Tennessee in a couple of weeks. Arriving at Thousand Trails on Lake Conroe, we noticed there were no shortage of spaces: 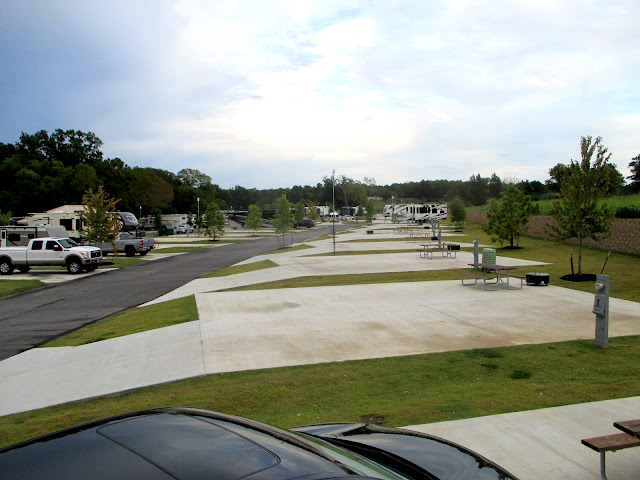 That's because most of the sane people weren't here in the blast furnace like we are!  We must do a better job of scheduling our appointments next year.

Leaving the Front Range for the San Juans

We leave behind our wonderful stays on the eastern side of the Rockies and head to western Colorado, careful as we are to remain high up in elevation as long as possible. We will always remember our stay in Estes Park and the companionship of Joy and Glenn as we beheld the wonders there.

I suppose our future visits to Estes Park will always be short ones, as I just have a hard time accepting the usurious rates charged by the RV parks. Any time I have to pay more than $2000 a month to park Phannie, I expect luxury, not tiny, dusty dirt sites like those at Elk Meadow. I have since learned that the city will not abide the building of any new RV parks there, so the rates have no where to go but up, I suppose. Of course, this represents the law of supply and demand, so I guess I need to get over it.

As is our custom, we try to facilitate getting under way on departure day by omitting breakfast and stopping on the road somewhere for an early lunch. This usually consists of a sandwich as we are parked at a roadside turnout of some sort. On this departure day, we had the pleasure of enjoying our lunch beside a clear stream that flows along highway 7 southeast of Estes Park: 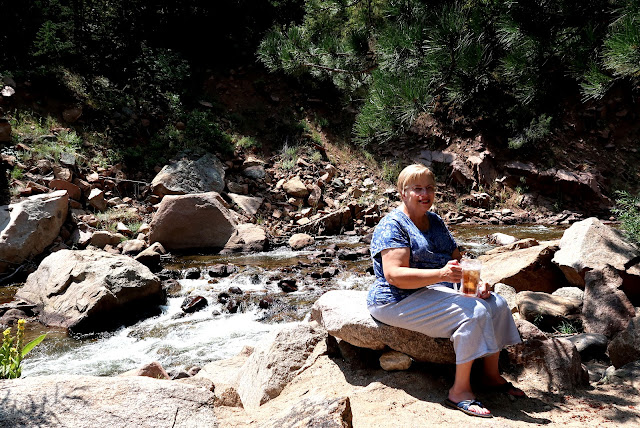 Notice that Sandy has a death grip on her iced tea glass, which is never far away.  I think if she were to fall in, she would ask rescuers to save the tea first.

We had an almost uneventful trip westward on I-70, except for an hour's delay at Glenwood Springs while firefighters battled a grass fire.  This has been another disappointing summer in many places in the mountains due to the smoke from the California forest fires; I hope they will be under control soon.

We made an overnight stop in Grand Junction where we stayed at a very nice KOA, and it was there that we got our first taste of really hot weather again at the lower elevation. Daytime temperatures soared to nearly 100 degrees, and we were reminded of what it would be like when we return to Texas. Ugh!

We made our escape from Grand Junction down Highway 50 toward Ouray and the relief  that would be provided by its 7700-foot elevation; we weren't disappointed as its surrounding mountains came into view as we passed through Ridgway: 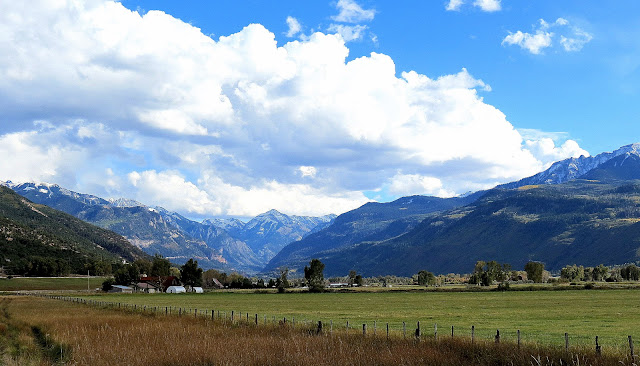 Here we are, finally parked at the Ouray RV Park (below) in the little town that bills itself as the 'Switzerland of America:' 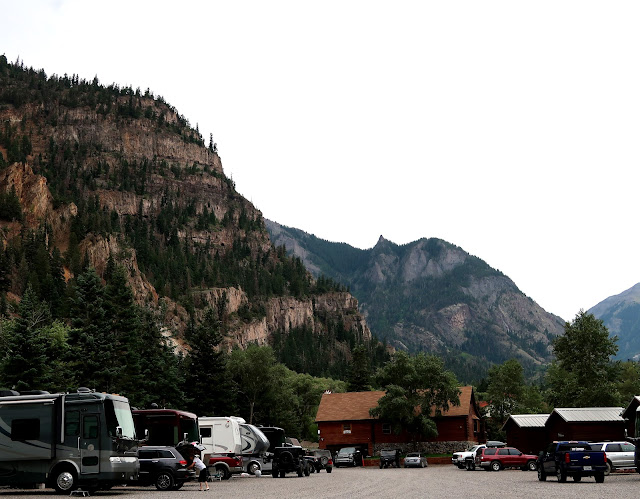 Here are some photos of this historic old mining town: 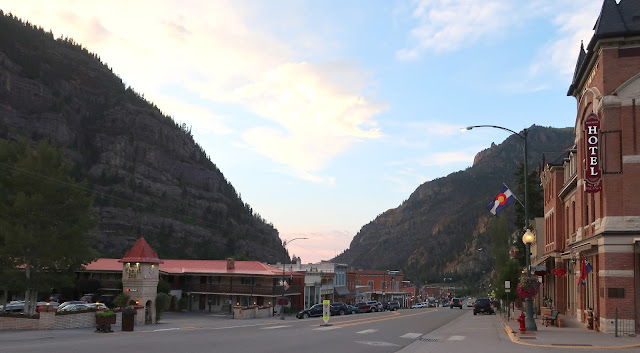 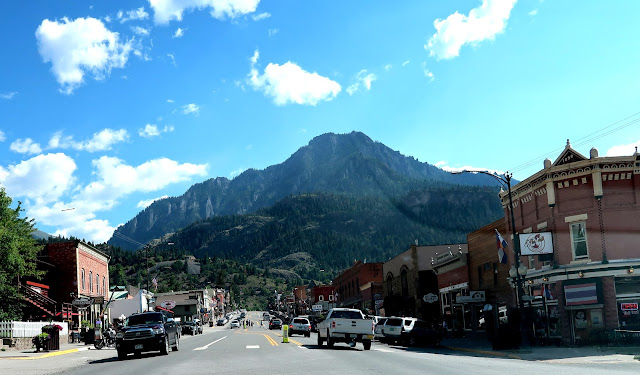 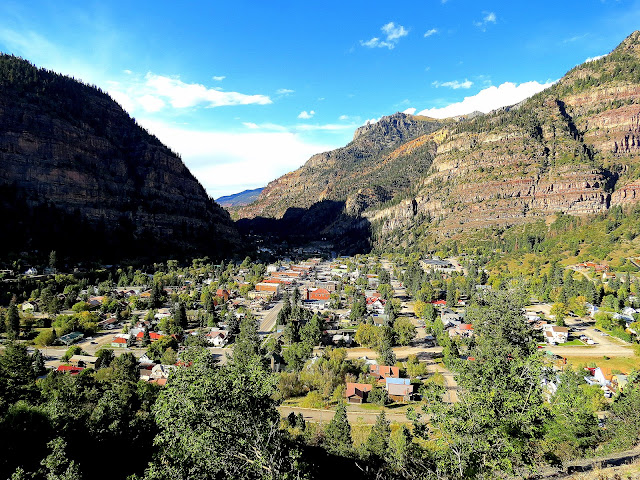 After enjoying the sights around Ouray for a few days, we headed out toward Durango, where we were to meet up with Bubba and his clan. We love the drive from here through Telluride and southwestward on highways 62 and 145, part of the San Juan Skyway. It is almost as scenic as Colorado 550, the Million-Dollar Highway, and much less arduous for a motorhome pulling a toad. Here's a great view from the San Juan Skyway: 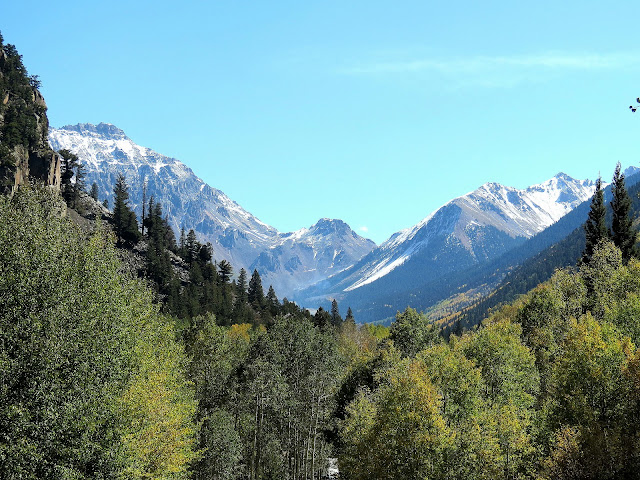 Once we reached Durango, we parked at the Sky Ute Casino RV Park in nearby Ignacio, a beautiful park that is a favorite of ours. Here's a photo from a previous stay and yes, this park is listed on our 'Best of the Best' page: 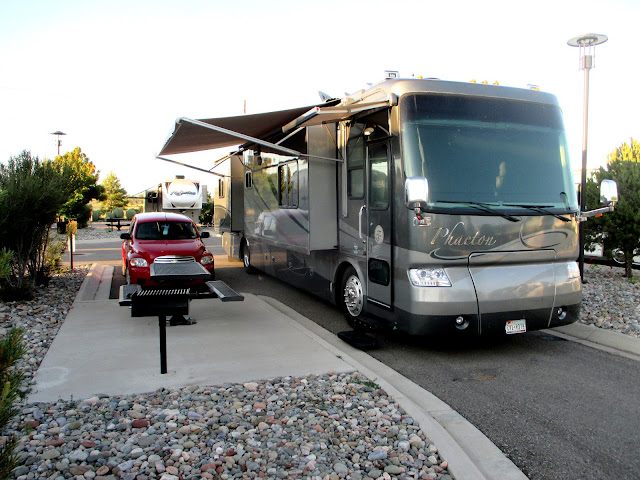 A Passport America park, the $19.50 per night charge here is an amazing bargain!

We had a great cookout with Bubba and most of his clan at Priest Gulch Campground (I forgot to get a photo), and we will bid them goodbye in a few days.  We will be hanging around here for as long as possible before beginning the trek back to Texas at the end of August. We're trying to get prepared for the summer heat there to greet us. But seeing the kids again will soon make us forget that minor discomfort. It has been a great summer for sure, and we're looking forward to more adventures in the fall.

Thank you, Lord, for this wonderful life;
please forgive me if I don't appreciate it each day as I should.

Estes Park With Friends as Guides

We have spent most of the week here at Estes Park, enjoying the incredible high mountain weather with daytime temperatures in the seventies and needing to turn on some heat on the chilly mornings. When we see the reports of triple-digit temperatures in Texas, it seems far away and unreal. However, when we return there at the end of summer, it will still be hot and all too real, I'm afraid. We wouldn't think of going back so soon, but we need to make our way to Tennessee and points east, to fulfill our autumn plans. Before we do that, we need to make our semiannual appearances at the offices of various medical professionals in the Houston area. This will facilitate the prescription renewals of the chemicals that largely hold our aging carcasses together.

While enjoying the cool mountain climate here, we have been in the company of Glenn and Joy, fellow Phaeton owners whom we met recently at Colorado Springs. We find it amazing that we would run into a couple who are so simpatico, sharing as they do my deep roots in the beautiful forested hills of far east Texas. (We grew up only about 75 miles apart.) We find that our backgrounds are remarkably similar, having many of the same family customs and preferences, borne from our mutual rural heritage.

Glenn and Joy have spent many summers in Estes Park, so we have had the unexpected good fortune to enjoy their role as tour guides, a favor they seem to delight in performing for us. Had it not been for our daily pilgrimages together around the area, we would have missed some very interesting and beautiful parts of this picturesque area. We traveled into Rocky Mountain National Park several times, seeing new sights and learning more about the beautiful area each time. Aside from an ascent to the highest point in the park at 11,000 feet, we saw numerous places we hadn't seen before, including these scenes from near the beautiful, crystal-clear waters of Bear Lake: 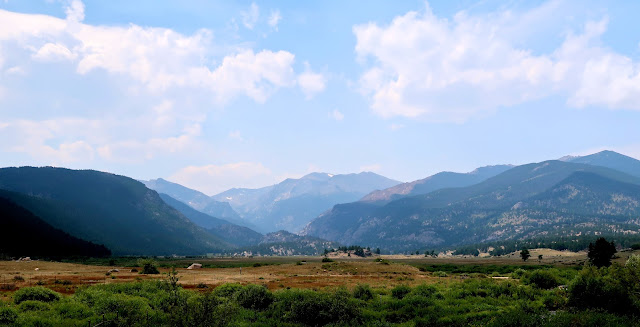 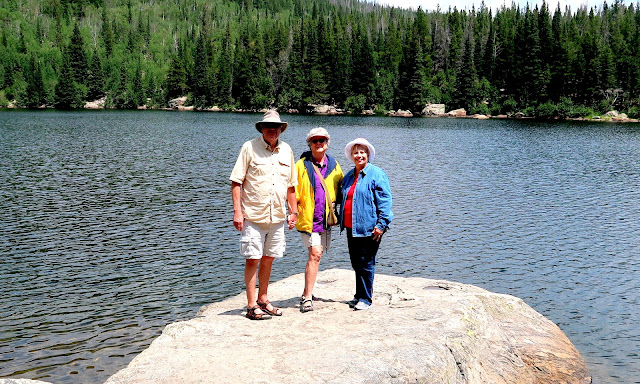 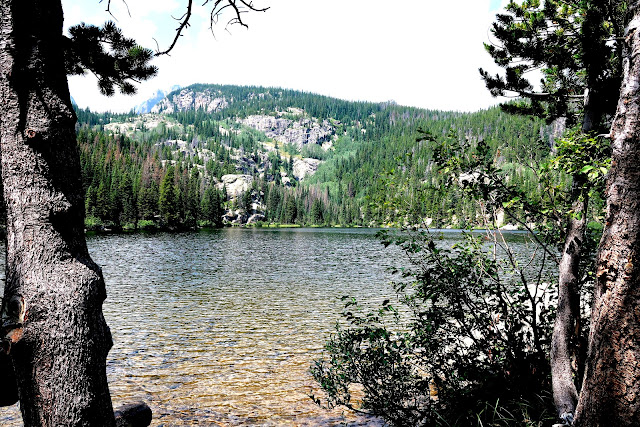 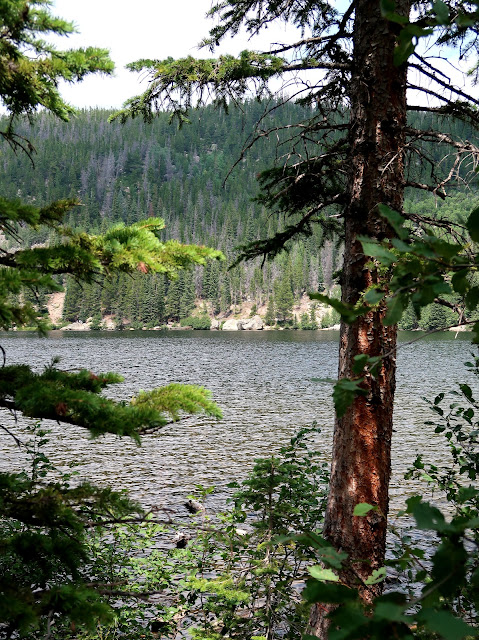 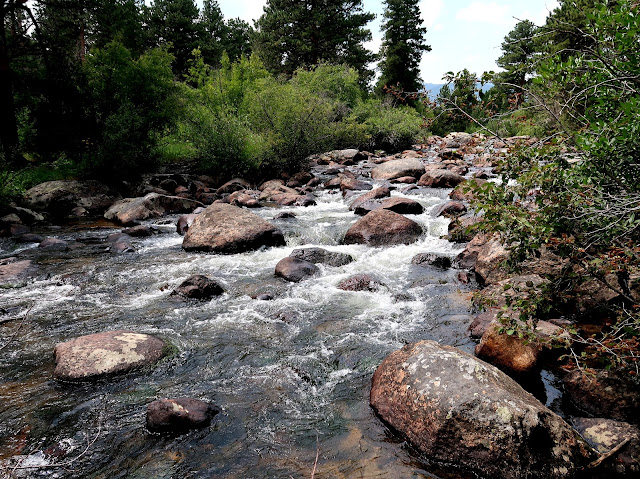 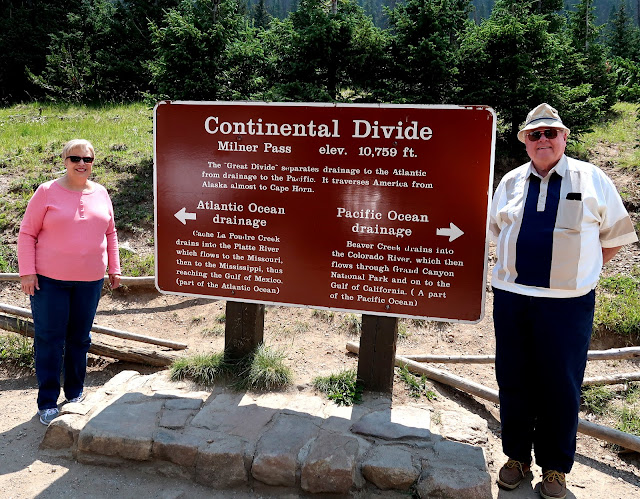 We also enjoyed a very entertaining western show at the Lazy B Chuckwagon in Estes Park. This was a talented troupe who were great musicians and who kept us laughing throughout:

Our good time was well worth the small price for the dinner and show, and we highly recommend it if you are in the area.

This post serves as a nice follow-on to the previous one, where I discussed friendships, old and new. We know that Joy and Glenn, while actually new friends, are already forever ones. And so it goes with this lifestyle. That's why we always close our posts with these thoughts:

Thank you, Lord, for this wonderful life;
please forgive me if I don't appreciate it each day as I should.