We Head Up the UP

I suppose I had better begin posting about our trip up the Upper Peninsula before I forget the subjects of the photos I've taken. (You young people who still have your memories fully functional had better enjoy it while you can; you annoy me to no end.)

Gosh, where to begin? After we left White Pigeon with Phannie's new jacks, we made the fairly short hop to Montague, Michigan, for a brief stay before heading to Ludington, where friends Eddie and Jan were parked for the month. One of the first things we do when we get to a new location is look up the best places to eat. We found a real winner at Pekadill's Deli in Montague (pronounced Mont-ah-gyew), where we were actually able to sit outside and enjoy dinner in perfect 75-degree weather in the afternoon: 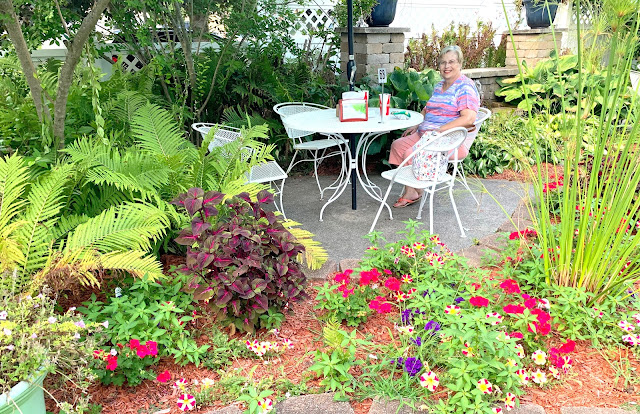 As we ate our oversized sandwiches, enjoying the fine weather and beautiful landscaping around us, unbothered by flies or other insects, it was hard to believe this was real. Such an enjoyable outdoor dinner would have been unthinkable in Texas in August. And the flowers! Oh my! Small-town Michiganers are serious about flowers, as you can see from the photo above. There will be more to come.

On the advice of Eddie and Jan, we made a side trip to Muskegon, for another outdoor dinner, this time at the yacht harbor. We just couldn't get enough of the amazing weather that allows this sort of thing as a matter of routine. For us, it was almost chilly here in the low seventies, and I don't think some of our friends in Texas, where there is a real heat wave going on, are speaking to us at the moment. 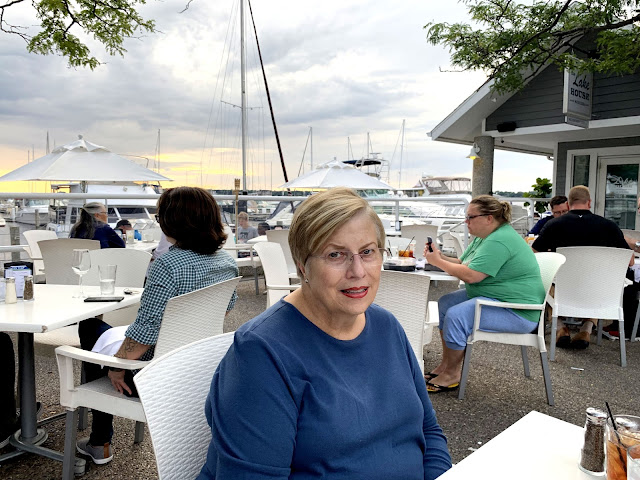 Then it was farther north to Ludington and Vacation Station RV Park, where we would finally meet up with Eddie and Jan. They are very special to us--fellow Texans whom we got to know through other good friends, Ed and Marilyn, mentioned in a number of posts over the years and also in just a few posts back. Eddie and Jan were extremely helpful in giving us suggestions for scenic drives and things to see in the area. 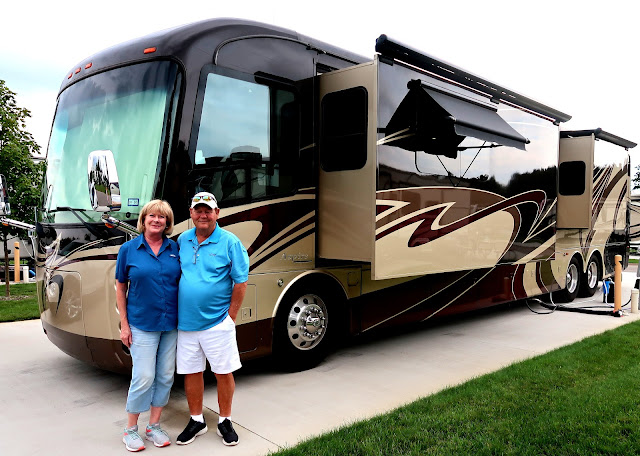 I should mention that this is one of the nicest RV parks we have ever visited, as you can tell from the photo above and the one below: 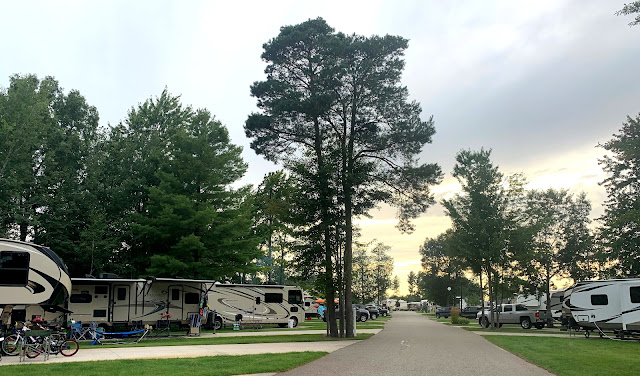 A plus about the park is that it is not overpriced, surprisingly enough. (I should mention that it is listed on the "Best of the Best RV Parks" page linked on this blog and has been listed there for a long time.)

Remember my mentioning flowers? Take a look at a few photos I took around Ludington. Many of these small towns are just breathtaking in the beautification efforts of their citizens: 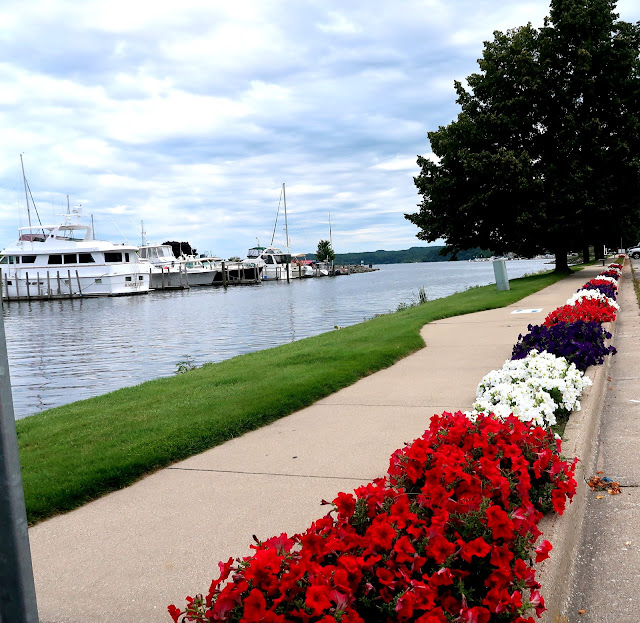 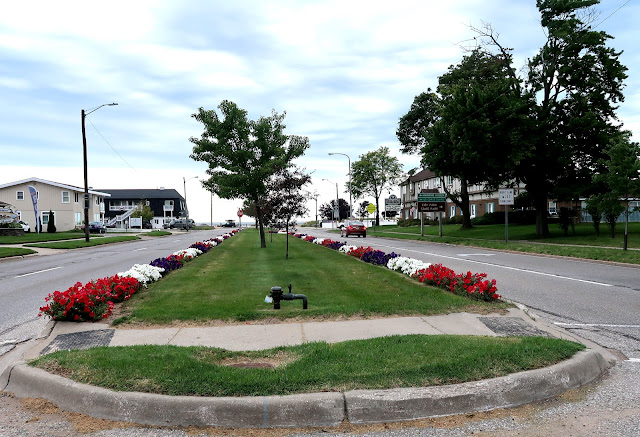 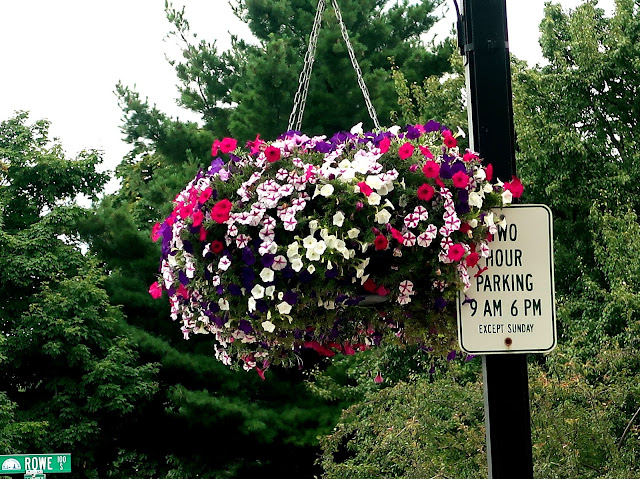 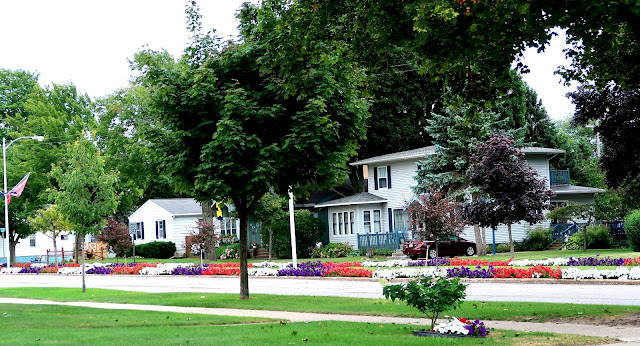 Thanks to our hosts, we got an unexpected chance to see the S.S. Badger docked in Ludington. It is the only remaining steam-powered ferry on the Great Lakes. 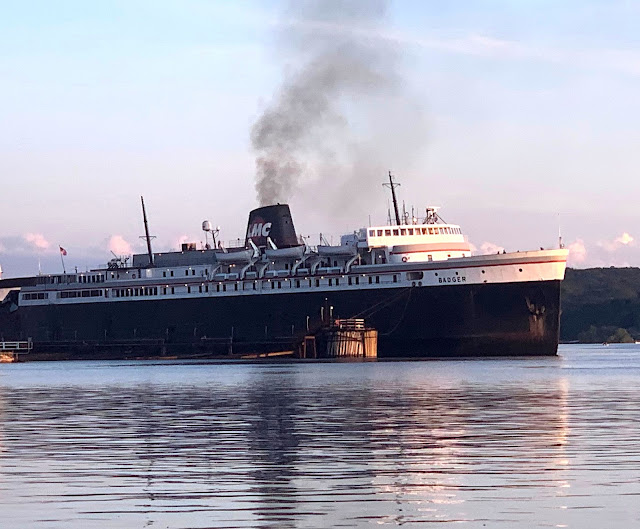 Built in 1953, she shuttles across Lake Michigan from Ludington to Manitowoc, Wisconsin, a distance of 62 miles, carrying vehicles and passengers, serving as an extension of highway U. S. 10. The voyage takes four hours and rarely cancels due to weather. Just as a bit of trivia, the ship burns 50 tons of coal each day, and the ash, previously dumped in Lake Michigan, is now removed from the ship daily, to be used as an ingredient in making cement.

By the way, here's some trivia about vessel nomenclature: Did you know that "S.S" preceding the name of a vessel indicates that it is a steamship? This is opposed to "U.S.S.," indicating "United States Ship" or "U.S.N.S.," indicating "United States Navy Ship," both of which are used to identify a ship operated by the U. S. Navy. There are many other of these identifiers in use among seagoing vessels, but I'm not going to list them here; that is probably enough trivia for this post.

We took a couple of day trips based on recommendations from Eddie and Jan. Highlights of these were a woodworking shop with some remarkable woodcraft for sale and an owner who was an absolute hoot. We also checked out Sanders Meats, a 90-year old meat market in the middle of nowhere--tiny Custer, Michigan--that had some of the best smoked meats and cheeses imaginable. Here is Eddie in one of the walk-in coolers along with a likeness of John Wayne. (This part of Michigan is not exactly a liberal stronghold.) 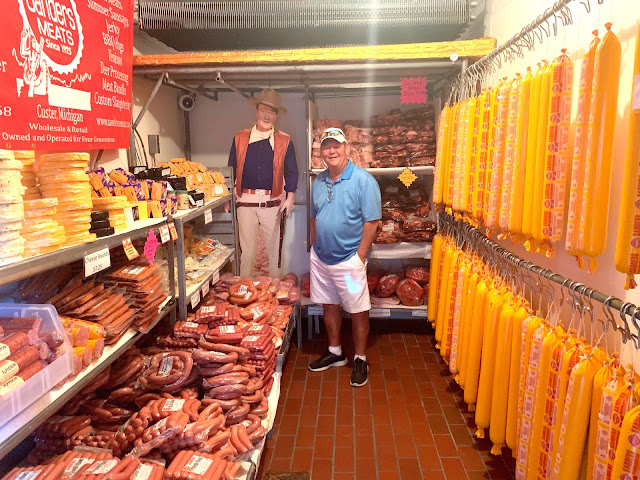 Of course, we couldn't leave without buying some goodies, so these were among my purchases, all of which were wonderful: 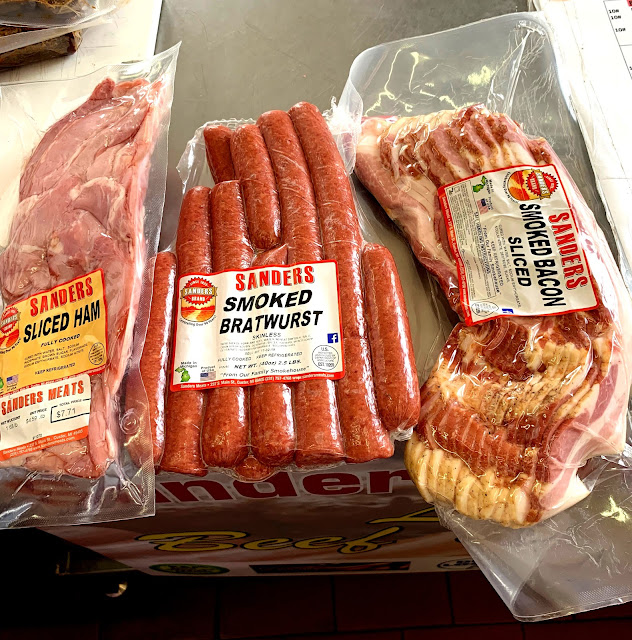 I'll have to say that finding little gems like the woodworking shop and Sanders Meats represent some of my favorite aspects of traveling in the hinterlands. You never know what kind of nugget you'll happen upon completely unexpectedly. I just love it!

As we drove along scenic Michigan Highway 22, we got our first really impressive views of Lake Michigan's blue waters--with no horizon visible, of course, making it indistinguishable from an ocean: 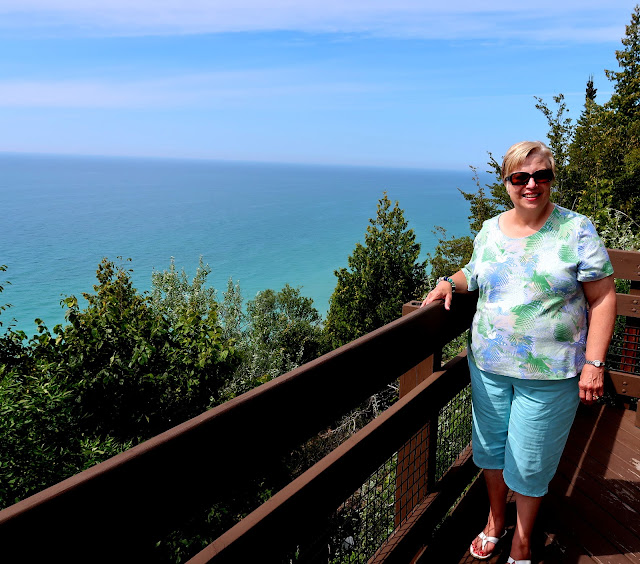 I'll leave this with something that really gave me a chuckle. We were all having lunch at a small roadside eatery just outside Ludington when I made a visit to the men's restroom. Hanging over the urinal was this painting of a rooster that provoked enough giggling from me that I, well, sort of forgot for a minute why I was there. Finally, my stream of consciousness returned, but I still laugh when I see this photo: 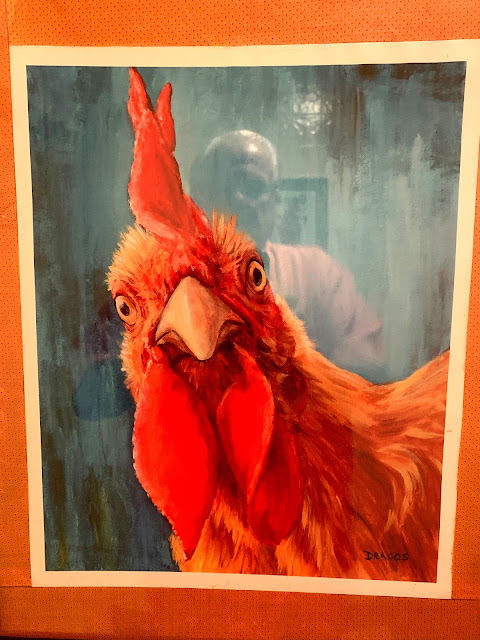 Little quirky things like this bring to mind the reason I get so much enjoyment out of this nomadic lifestyle and the indescribable value to us of this blog, soon to reflect 15 years of our life with an RV from the very first trip in 2005. It also amazes me that, in all likelihood, it has had well over a million page views. (The Feedjit counter you see near the top of the right column started on zero only about six years ago. I set it at zero because I didn't know how many looks it had had in the previous nine years, but I''m guessing it would be over a million by now.) Many thanks to those who have followed along with this nonsense. I hope it has been as enjoyable for you as it has for me to write it. I get the feeling it helps exercise my memory, and there's something else that I don't remember right now. Anyway, we will relive these experiences via these pages long after we hang up the keys, and that will be worth it all.

So, stick around; who knows what we'll find at the next stop!