Okay, perhaps the title of this post is a tad over the top.  My alarm over the indignity suffered by Phannie last week could hardly compare to the anguished phrase famously uttered by WLS reporter Herb Morrison as the Hindenburg burst into flames as it landed in New Jersey in 1937.  Even so, it was indeed painful to see the proud coach towed away ignominiously from the shop where I was having another gauge installed (you know how I hate the idiot lights).  When the installation was done, I fired her up and noted that the dreaded “check engine” light was on, causing me to emit an audible gasp!  For modern vehicles like Phannie, increasingly controlled by computers, this light can strike terror in the heart of the driver, much like the horror of the “blue screen of death” so well known by PC computer users.  I prayed that the fault announced by the light was something relatively innocuous like a filter obstruction or that Phannie was just miffed at having been parked outside all day.  Alas, it was not to be.  Noting that the engine was idling smoothly, I put Phannie in gear, released the brake and pressed on the accelerator.  Nothing.  Pushing the accelerator to the floor failed to advance the rpm at all.
I  shifted back to neutral, set the brake and turned off the ignition, hoping it was all a bad dream.  Then I cranked it up again, hoping for something different.  No dice; there was the nefarious yellow light, taunting me.  Sure enough, there was no response from the accelerator; nothing had changed.


The longer I stared at the light, the more I came to realize that the engine computer (which I have now named Hal) had decided to lead a mutiny against me, having determined that I was too stupid to deal with whatever condition was making it uncomfortable.  (While this may be true, I resent Hal's sudden evolution from what I thought was a provider of helpful information to becoming a member of the Gestapo.)  I mean, really!  What did Hal think I was going to do, take out my pistol and fire a slug into the radiator?
Since it was late afternoon on a Saturday, I knew any attempt I would make to find help on my own would be a challenge, so I turned to my membership in Good Sam Emergency Roadside Assistance to find it for me.  This turned out to be a revelation in just how inept this service could be.  Without going into the maddening details, I suffered eight hours of indifference and incompetence from this dreadful outfit.  A mechanic showed up about 1:00 a.m. on Sunday morning, hooked up a computer to the data port, flashed Hal (I think the pervert liked it) and determined, after consultation with Caterpillar, that Hal's disablement could not be fixed in the field.


Good Sam could not explain how it could possibly have taken eight hours to get assistance to me, perched in none other than the middle of the Dallas/Fort Worth Metroplex and surrounded by dozens of road service providers.  I had planned to switch to Coach Net when my Good Sam’s contract runs out in February, and now I wish I had done it earlier.  For years, I had had fairly good service from Good Sam for minor things like locked keys or tire changing, but when it comes to a big rig, I don’t recommend them at all.  I'm now thinking that Good Sam is somehow in collusion with Hal.  It's all very troubling.

As perhaps their last service for me, I had Good Sam arrange for a wrecker at 10:00 a.m. the next day to tow Phannie to the Freightliner facility in Fort Worth.  This, surprisingly, went off without a hitch (pardon the pun) and, as of this post, the problem is still not resolved.  We’re at one week and counting, and we missed an RV trip we were planning to Houston this weekend.
So, what how does this event play into our observations so far from our new relationship with Phannie?  Well, let's see:
We love the ride, comfort and convenience of a diesel pusher.  However, it is a complicated piece of machinery with a myriad of systems that will, inevitably, need repair at times.  When repairs are necessary, they are usually expensive; that's why most owners purchase a maintenance agreement, in case there is a catastrophically expensive repair required at some point.


Fuel mileage is abysmal; you have to be prepared for breathtaking numbers on diesel fuel pumps and try not to think of how much fuel costs per mile driven.


I really resent the degree to which the manufacturers have dumbed down the engine operation.  They use a computer and idiot lights instead of good ol' gauges to allow the driver to use his intelligence and determine what's going on.  On the other hand, I understand why the manufacturers do it:  They have to build these coaches for the lowest common denominator among the potential owners, and there will always be a few who would have no clue what the gauges could tell them and could indeed damage the engine needlessly.  Even though I know all this, it still ticks me off.  I suppose that is because I spent an entire career operating machines of far greater complexity--turbojet airliners--and I seem to have made the correct operating decisions when things went wrong.  (And this was before the proliferation of computerized systems among modern airliners that you see today.)  My flying career did just fine without Hal, thank you.


We've learned that the handier you are with mechanical things, the less expense you will have in keeping up your rig. Unfortunately, I am not particularly gifted in this area, so my wallet usually takes a hit.
We’ve also learned that RV repair facilities generally do not operate with the same sense of urgency as those that service automobiles and pickups.  I suppose this is because there is a conception that RV travel is a leisure-time activity and that timeliness is not necessarily a priority.  This has proven true in all the years we owned fifth wheels, and it is certainly true with Phannie.  How do you deal with this if you're in a hurry?  It presents a dilemma when negotiating with RV repair shops:  Do you get better results from being aggressive, demanding and threatening or can you do better with smiling, stroking and charm?  I think that, in most cases, the charm thing works better for me, but I’m not particularly given to polemics anyway.  The bottom line is that most everything you do with an RV is time-consuming and expensive, so it may not be a good fit for folks with double type-A personalities or those with a modest travel budget.


It's really too early to determine the level of dependability of Phannie; I'm still taking a bit personally Hal's treachery (especially galling after all the praise I have lavished upon Phannie in this rag) and I'm still a little worried that Western Freightliner has not yet rendered a diagnosis.  We will be standing by, however, chewing our fingernails, and we'll keep you posted.
Posted by Mike Mills at 1:24:00 AM 9 comments:

Email ThisBlogThis!Share to TwitterShare to FacebookShare to Pinterest
Labels: Freightliner

It was all due to a Groupon.  I don’t know how many people use these things, but we just can't resist them.  Half off of stuff is just too good to pass up, so I guess we’re just cheap.  We mostly use the restaurant coupons because we eat out, well, too much.  A few months ago, a Groupon popped up for admission to the Japanese Garden at the Fort Worth Botanical Gardens, so I bought it.  I kept it, downloaded into the iPhone, throughout the summer because the weather was just too hot to enjoy outdoor activities.  Since it turned out to be a beautiful autumn day yesterday, we decided to go take a look.


I am almost embarrassed to admit how long I have lived in this area without visiting the botanical garden complex in Fort Worth, but that seems to be the case regarding quite a number of attractions in the DFW Metroplex.  For some reason, owning an RV seems to have given me the impression that it is necessary to travel somewhere else to enjoy new sights and adventures, so it hasn’t really occurred to me before that I may have missed something in my own back yard!

We drove Mae (our toad) to the garden complex off University Drive.  Why?  Well, it’s a matter of miles per gallon.  Phannie gets 7, the Escalade gets 13 and Mae gets 26.  (I told you I’m cheap.)  We were struck by how large an area is occupied by the gardens, and on this Saturday there were many townfolk wandering around the manicured grounds.  There were few parking spots left at the Japanese Garden, as two wedding parties were there holding ceremonies.  We learned from the gate attendant that four weddings were booked on the day of our visit.  It’s easy to see why this is a popular wedding venue:  The place is beautiful!  Sandy and I have always enjoyed the simplicity of Japanese gardens; I know of no others that evoke such a sense of serenity.  I’ve included a few photos to illustrate: 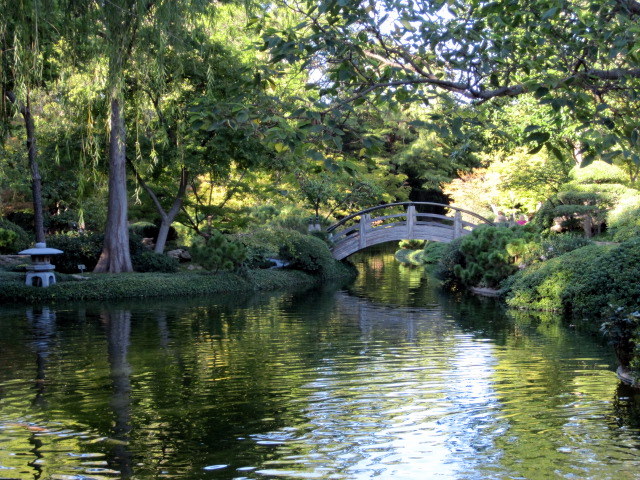 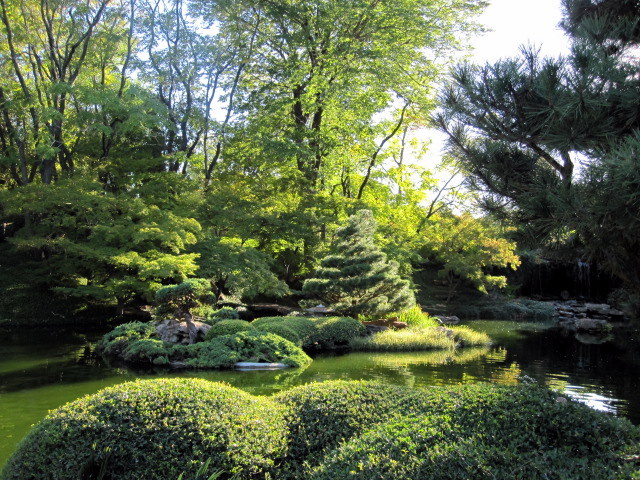 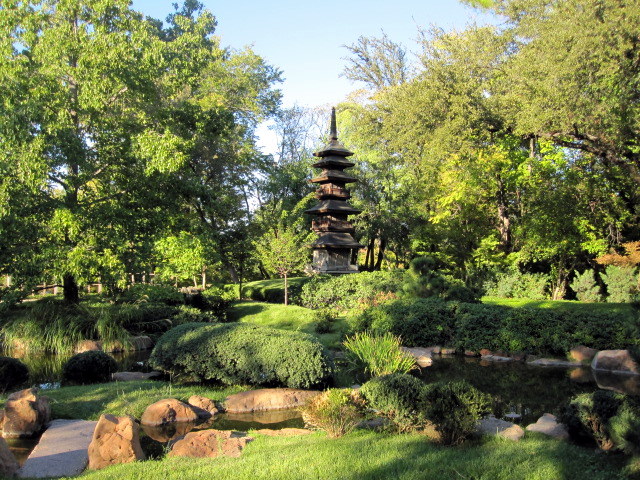 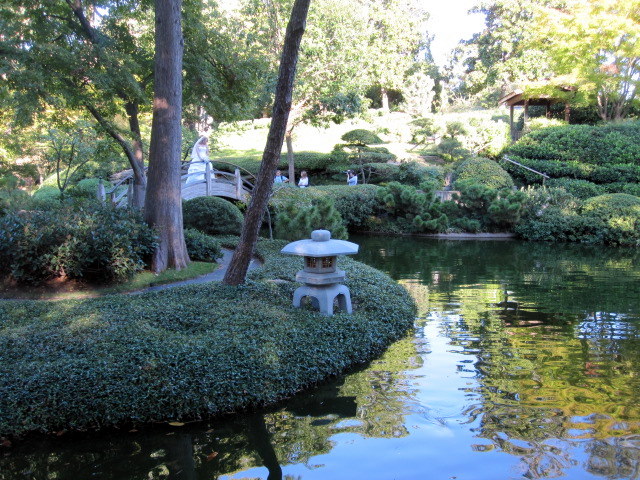 After enjoying the garden, we were (naturally) hungry, so we checked the old iPhone for our Groupon collection and, lo and behold, found Tres Jose's, a fine Mexican restaurant nearby that we had almost forgotten about.  We enjoyed an excellent meal with fajitas, enchiladas and tacos, and after applying the Groupon, the bill was eleven bucks!  (Yes, the Groupon cost a small amount, but we were able to knock $15 off the bill with it. Not bad!) 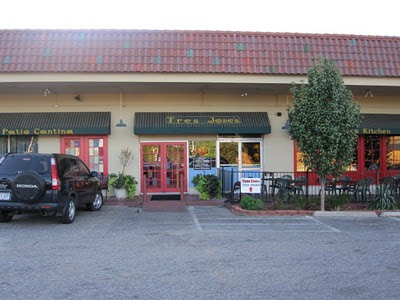 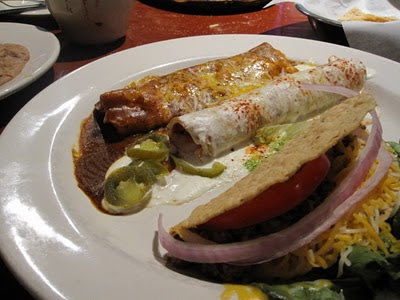 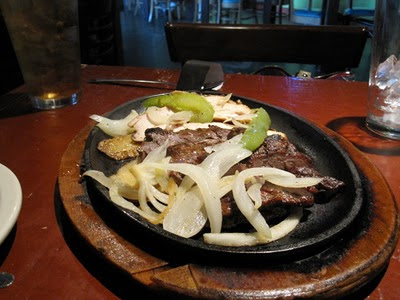 What a great afternoon!  When we pulled into the driveway later, we noticed Phannie, nosed into her RV port, as though she had been sent to the corner by a schoolteacher.  We felt, oddly, a little guilty.
Posted by Mike Mills at 1:56:00 AM 6 comments: