Stuff I Think I Need

One of the things I find fascinating about RV bloggers is their seemingly limitless imagination and ingenuity in repairing, customizing or just tinkering with their RVs.  Some folks are remarkably gifted in performing their own mechanical repairs, like Clarke of Our Newell Adventure.  Others, like Mui of  2 To Travel’s Phaeton Journeys, do careful research and seem always to acquire just the right thing to fill every need or whim and then perform an expert installation as well.  Sadly, I am nothing like these talented people.  It is my lot in life, I guess, to expend my hard-earned treasure to hire professionals to do what they seem to do easily.


However, since I do have a few very basic mechanical skills, I carry along a fairly rudimentary set of tools, and I have attempted to assemble a small collection of parts, hardware, lubricants and fasteners that might come in handy if something breaks on Phannie which, of course, it will. That is not to say that it would necessarily be me using this stuff, but it might; who knows?


Besides things like spare bulbs, fuses, clamps and fasteners, I also carry spare parts that might not be readily available outside of large cities, like fuel and oil filters and an extra fan belt for the Caterpillar engine.  I also carry a good quality folding ladder and some of those triangular emergency reflector thingies that you set out to warn drivers of a disabled vehicle ahead. 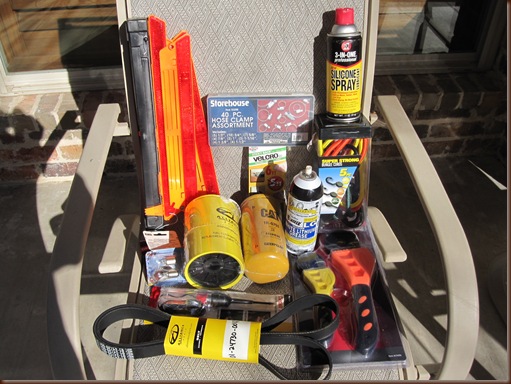 I also carry a few specialized tools like filter wrenches, a voltage tester and even a socket that will fit the large lug nuts on Phannie’s wheels.  I learned that from a blogger who wrote that he had waited for hours in the middle of nowhere waiting for a service truck to change a tire only to be thwarted in the effort when the road service tech discovered he didn’t have a socket of the correct size. 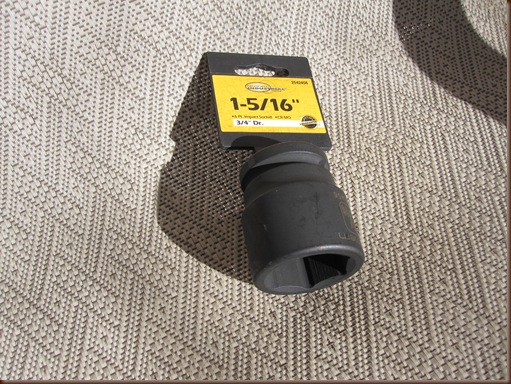 Once frustrated by not having the correct adapter for Phannie’s electrical power cord, I now carry adapters for every conceivable power configuration that I might encounter. 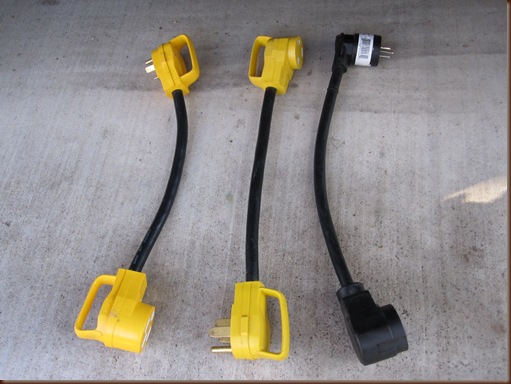 Again, because I learned the hard way, I also carry an extra 50-amp extension cord. 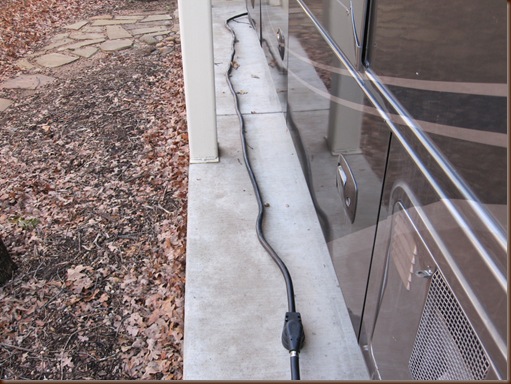 Same is true for a regular extension cord and water hoses; I carry three hoses, again, learning the hard way.  (Yes, I know this doesn’t meet the neatness standards of some folks, but hey, I don’t have ulcers from worrying about it.) 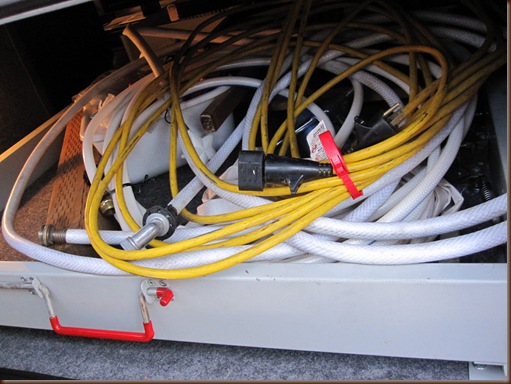 And what could be handier than a good worklight? 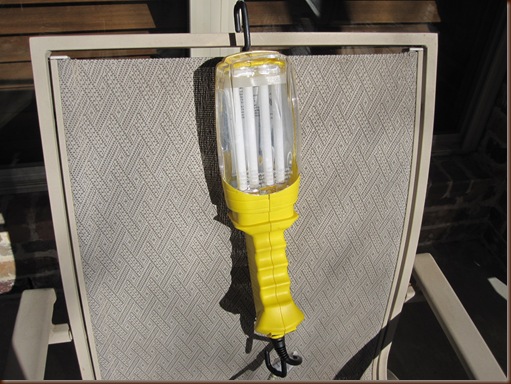 I also carry a little label machine, something I’ve found that has a myriad of uses.  It’s amazing how much more organized I feel when boxes and bins are labeled with their contents and when obscure switches, handles, controls and gauges are clearly labeled.  (I defy anyone to tell me immediately which direction is hot on a single-lever faucet.)  They also come in handy to attach placards showing brands and specifications for fluids that might need to be added.  As I get older, I’m aware of needing more of these helpful little reminders; If you find a label on my forehead with “If Lost, Return to Sandy,” you’ll know it’s time for me to hang it up! 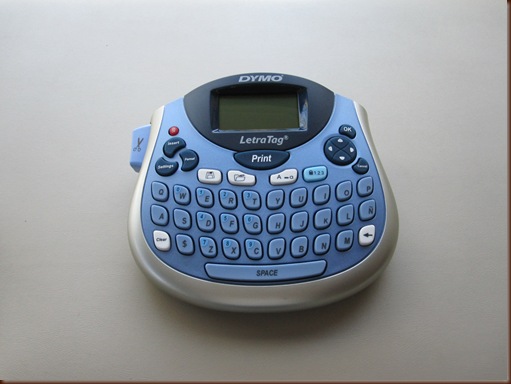 So, that’s a peek at just some of the stuff I think I need to take along in Phannie; I would be interested to know what you carry with you that the rest of us may not have considered…
Posted by Mike Mills at 12:50:00 AM 7 comments:

To Protect and To Serve…

Sandy’s eyes were closed, her head nestled in the soft leather of the front passenger seat  as I guided the Escalade swiftly and smoothly toward Dallas from Little Rock on I-30 Tuesday evening.  The cruise control was set at 75 and, having occupied the passing lane for many miles, the big SUV drifted effortlessly past an unending queue of mostly trucks that were growling along in the right lane.  Using the remote control on the steering wheel, I skipped from one favorite preset on the XM radio to the next, not thinking about much of anything except how many bugs had given their lives as they collided with the windshield for the last couple of hundred miles.

Suddenly, I noticed far ahead a set of flashing red and blue emergency lights in one of the oncoming lanes.  Instinctively, I pressed the cruise cancel button on the left side of the steering wheel and allowed the car to slow slightly.  As the lights drew closer, I was able to discern their attachment to the roof of a black and white state police cruiser with the familiar gold symbol of the state of Texas on the door.  Without warning, the oncoming trooper braked hard and made a skidding left turn onto the grassy median and into my lane, stopping crossways in front of me and the 18-wheeler beside me in the right lane.  Fortunately, the distance was sufficient for me to bring the Escalade to a safe stop, but the Kenworth alongside headed for the right shoulder as he stood on his squalling brakes.  I could see the headlights of other vehicles behind me as they dipped or skewed to either side of the roadway, the drivers in both lanes fighting to avoid collision with the stopped vehicles ahead of them. 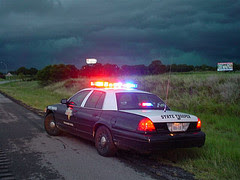 I couldn’t imagine what had caused the trooper to execute this dangerous maneuver—that is, until I looked up, horrified, as two headlights suddenly appeared directly ahead, on the other side of the cruiser, coming toward the now motionless lines of vehicles.  The lights quickly grew larger and brighter, indicating the wrong-way driver was closing the distance at a very high rate of speed and in MY LANE!  I glanced over at Sandy, who had awakened by now, and I only heard myself shout, “Look…!”  as the black BMW roared past on my left, missing the police cruiser and our car only by inches as the driver edged over to the shoulder.  I don’t know what I was trying to say to Sandy…maybe “Look Out!”  I still don’t know.


After the BMW passed, the trooper gunned his engine and sped off to our right, across a grassy embankment and onto the service road parallel to the Interstate, flashing his headlights and doing all he could to warn other drivers behind us of the danger.  I noticed in the rear view mirror that he was being joined by other patrol units as another two sets of flashing lights appeared in the distant darkness.


It took a few moments for the Kenworth driver and me to collect our thoughts and slowly begin to drive forward.  We knew that things might have turned out very differently had it not been for the trooper who willingly placed himself in harm’s way between our car and the speeding BMW.  The lawman obviously had no inkling of the wrong-way driver’s mindset; for all he knew, this could be someone too drunk to avoid a collision or a lunatic in a suicide attempt.  Yet, the trooper sat there, motionless, as the glare of the BMW’s headlights outlined ever more starkly his silhouette at the cruiser’s steering wheel.  Had there been a collision, the cruiser would certainly have been totaled and the survival of the trooper definitely in question.


I don’t know the ultimate outcome of the chase, but I’m pretty sure things got ugly when the BMW was finally stopped.  I hope no one was injured by this madman.  I so wish I could have thanked the trooper for his bravery. Were it not for him, I might not be writing this, and Sandy might not be able to continue spoiling our grandson, as she feels is her calling.  (Not mine, of course.)


This unknown brave trooper is now in our prayers; we’re counting on God to bless him.  Where do we get such heroes?

Yes, I am aware that our posts have been, well, nonexistent for the past few weeks.  The reason is that it was largely February during that time.


If bad stuff is going to happen to us, it will likely happen in February, you can be sure. And, alas, this February was no different.  The five of us in our immediate family—Son-in law Tyler, daughter Mindy, grandson Mason, Sandy and I—had, at various times, bouts with colds, bronchitis, ear infections and stomach flu.  Besides that, I had to have a couple of steroid injections for arthritis, so we were ready for February to be finished in terms of our health issues.

As if that weren’t enough, our good friend Bubba lost his dad, Barry, to cancer.  We have known Bubba and his family for many years, and his mom and dad, Barry and Algene Barker, have been sort of our adopted parents after Sandy and I lost our own parents over the last several years.  Barry was much loved by lots of people, and we will surely miss him.  Sandy and I couldn’t help but think of the sad irony that we both lost our own fathers in the month of February. (See what I mean?)


Sandy and I drove Phannie out to Lockney, Texas (near Plainview) for the funeral, and we had our first “moochdocking” experience there.  Some neighbors who lived across the street from Barry and Algene insisted that we park in their driveway and hook up to their water and power for the two nights we were in Lockney.  This worked very well, and we’re grateful to the Teeters for their hospitality.  At peace now and with God for the ages, Barry; yours was a life well lived.
Posted by Mike Mills at 10:41:00 PM 6 comments: