It would be difficult to find a better place than Branson for a family with kids to get together for the Thanksgiving holiday, especially if the weather is beautiful, as it mostly has been this time. With this in mind, we planned this trip months ago and made our reservations at Top of the Rock for their awesome Thanksgiving buffet. Mindy and Tyler flew with the kids up to nearby Springfield, Missouri and then settled in at the Grand Country Inn in Branson, a hotel and entertainment complex where there are almost limitless activities for kids. They spent a couple of days at Silver Dollar City, a large theme park west of town, decorated to the hilt with more than six million Christmas lights. Here's a sample: 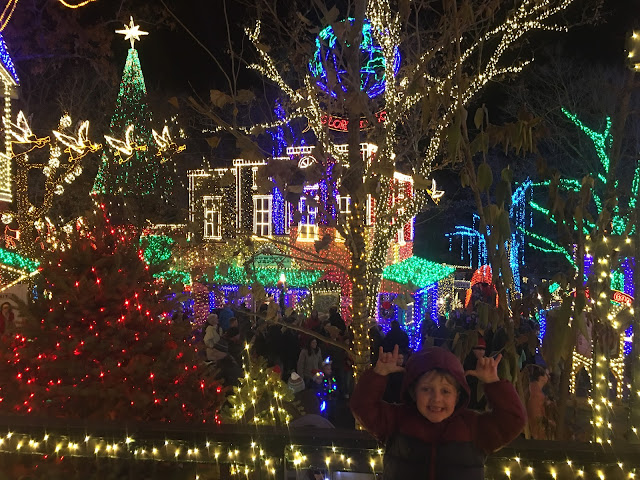 To say that the boys were enthralled would be an understatement. Each night they would fall into bed, exhausted from their full days of excitement.

Thanksgiving dinner at Top of the Rock was especially nice, as we had our own little alcove where we could eat and visit. We were there as the sun set, and the view over the Ozarks and Table Rock Lake was breathtaking: 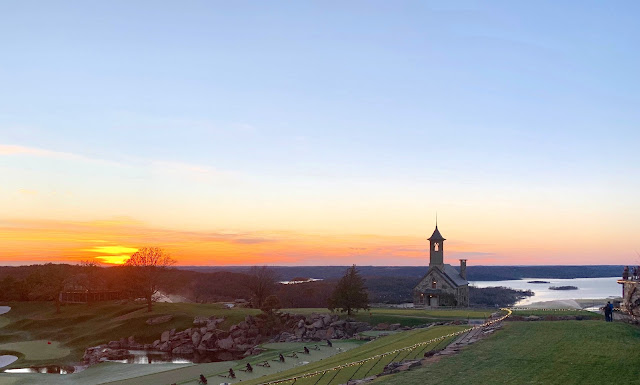 Here we are with Mindy, Tyler, Pryce and Mason in our private dining alcove at Top of the Rock: 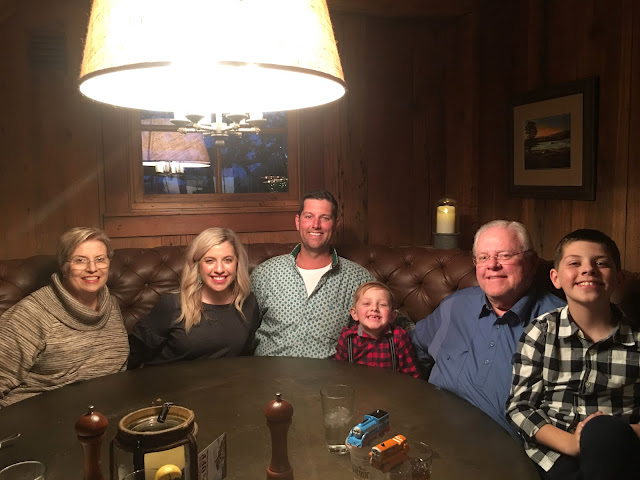 Sandy is in heaven with her boys, Mason and Pryce. They love their Mimi: 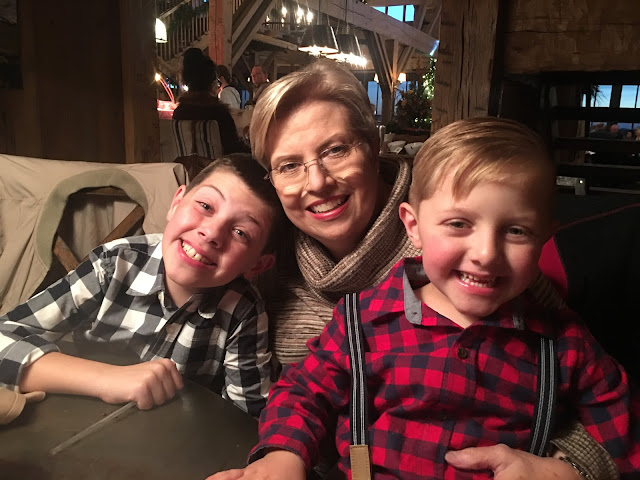 The boys seem to tolerate their Poppy pretty well: 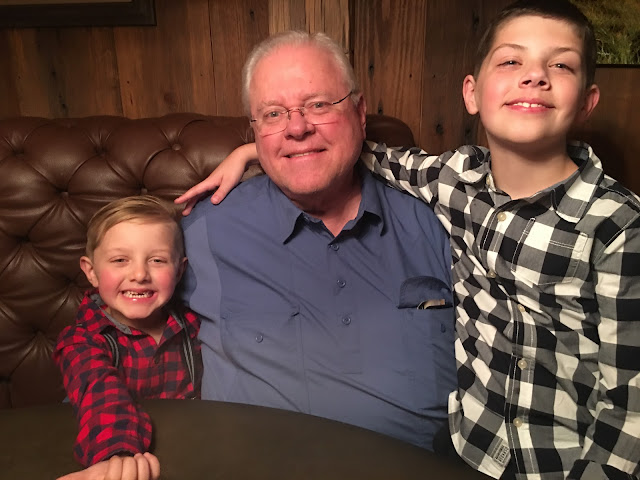 We mentioned in an earlier post that Mindy is expecting, so we have another grand on the way. Now we can disclose that it will be another boy. We are so excited! There is indeed so much to be thankful for this Thanksgiving. We trust that all of you had a wonderful holiday.

On the one and only cold and rainy day during this trip, I decided to cook up a pot of soup, and Sandy made crackling cornbread. Both were new recipes for us, but they turned out really tasty.  The soup was my take on Olive Garden's creamy Zuppa Toscana, made with sausage, potato, onion and kale, I think. Since I'm not all that fond of kale, I tossed in a little cabbage, and it turned out really well: 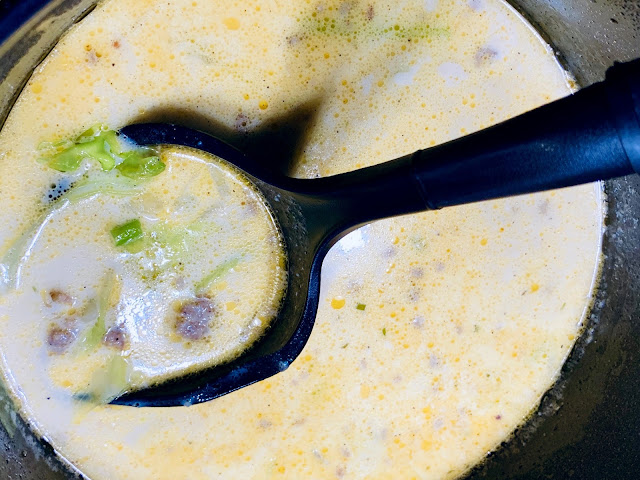 Sandy made crackling cornbread by a new recipe, and it was absolutely scrumptious: 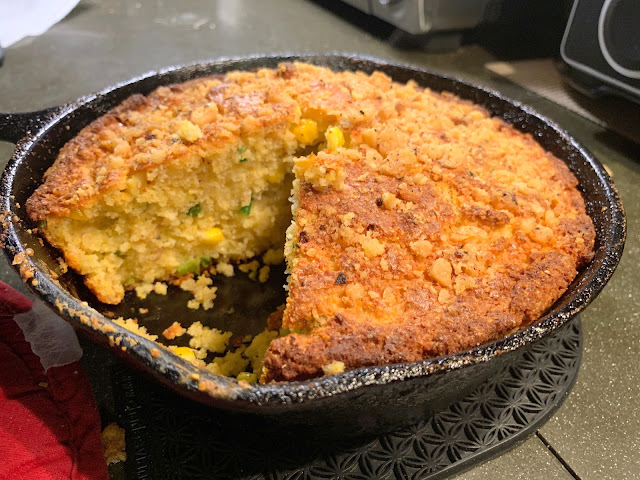 We also had the good fortune of running into our friends Larry and Carolyn while we were at Treasure Lake. 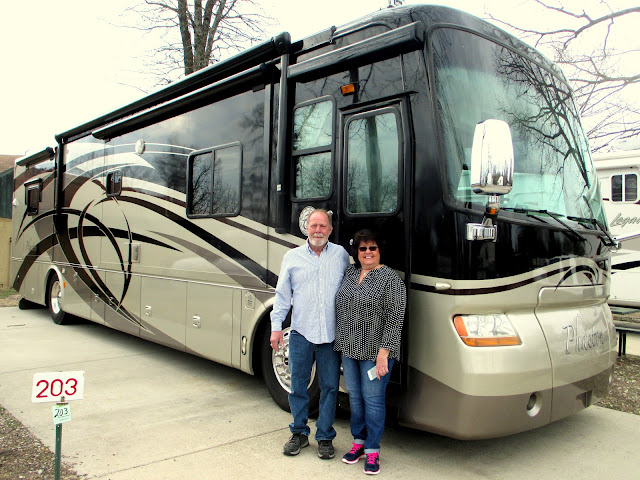 We are so thankful for all our friends like these in the RV community. When we began this adventure, we had no idea that we would become acquainted with so many wonderful folks along the way. There is a common element, I suppose, in that most are retired and enjoying themselves, free from the constraints of work and raising families. For those like us who are fulltimers, their surroundings can change from one beautiful place to another merely by turning the key in the ignition. At this stage of their lives, with their days of confinement, struggle and drama behind them, it's easy to see why they're happy. And it's not hard to make friends with happy folks.

In a few days, we will return to the Lake Conroe Thousand Trails through the Christmas and New Year's holidays before heading to the Rio Grande Valley for the rest of the winter. But first, we will stop in Livingston, our residence city of record, to fulfill our civic duty. Sandy and I both had received jury summonses over the last several months and, because we are rarely in the state to comply, the district clerk simply excused us when we called and asked that we volunteer for duty at a future date. This is a rather remarkable accommodation for us fulltimers, but not unreasonable, I suppose, due to the importance of Escapees to the little town.

Back in Texas and Making Winter Plans

Leaving Nashville, we spent a few days at one of our favorite campgrounds--Tom Sawyer RV Park in West Memphis, Arkansas, situated right on the west bank of the Mississippi River. We've been there several times and never tire of watching Old Man River and the constant parade of tugs pushing barges--ever so slowly upriver and swifter as they float downstream. In the photo below, it looks like some of the park's friendly geese like looking at the river, too. 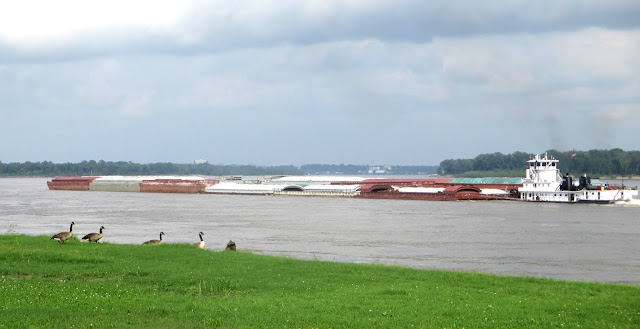 Since we've visited the sights of Memphis several times, we chose not to do touristy things this time; besides, the steady rain argued against getting out and about. On the second day, the rain stopped for a while, long enough for Sandy to do some shopping, something that always perks her up!

The day before departure brought about a clearing of skies, allowing for a view like this at sunset: 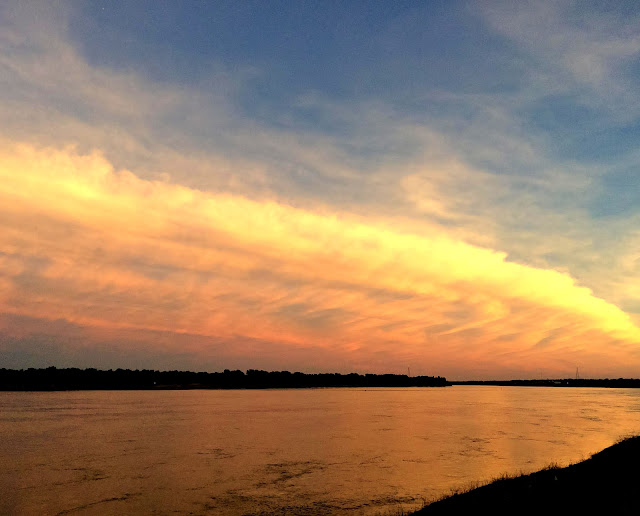 In a previous post, I expressed my observation of a pattern shift in our fulltime travels, concluding that we had reached a point where we are definitely moving from a 'vacation' mode to a 'destination' mode. I suppose this could be defined as a 'go-somewhere-and-stay-put-for-a-while' stage. It is clearly a paradigm shift--one that seems to be a rite of passage at some point by most who start fulltiming, and it was largely underscored by our realization that we really had nothing left to see in Memphis, having faithfully recorded our previous visits here in this blog, complete with photos.

There is a larger perspective that we have realized: During roughly 50,000 miles of travel in 'vacation' mode, we have seen most of the places in the country that were on our bucket list. With this in mind, our need to continue in such a nomadic fashion is much less compelling. This brings into focus what the obvious next stage of this adventure will be--hanging up the keys. The inevitability of this has been made much more evident in past several months as a surprising number of our fulltiming friends have either left the road or are in the process of doing so, in favor of returning to a stick and brick house. While we've always known that this freewheeling fantasy will come to an end, we confess to being a bit surprised that so many of our comrades are bailing out at one time. Their timing does seem to be coincidental, however, there being diverse and understandable reasons for having actuated their exit strategy, but we're still trying to get our heads around it.

That doesn't mean we're anywhere nearly done with our travels, however. For example, we would like to make another long trip through the western U. S. and up through California to the Pacific Northwest. We're still looking for the ideal cool place to get away from the hot Texas summers. Last summer in Colorado was nice, but the few parks that met our preferences there were fiendishly expensive. We don't think our requirements are all that far out--a nice, safe park with hard surface sites, good cell service and not too far from a metropolitan area. We're thinking we might take a look somewhere on the Olympic peninsula in northwest Washington state next summer.

We will have it all captured in this blog, of course and, as we approach our own exit from fulltiming--whenever that may be--we'll be able to reminisce about it as much as we like in the pages of Phannie and Mae.

Leaving Memphis, we traveled to Texarkana for the next stop and almost met up there with good friends Jackie and Steve who, unknown to us, were not far away from our I-30 route on their way to Houston from Ohio. They encountered a mechanical problem, however, and weren't able to make the rendezvous, much to our disappointment.

The next day took us to Fort Worth for more doctor appointments (these never stop, do they?) and to take in a gospel music concert with friends Don and Ruby, along with Mary Lou and Harvey: 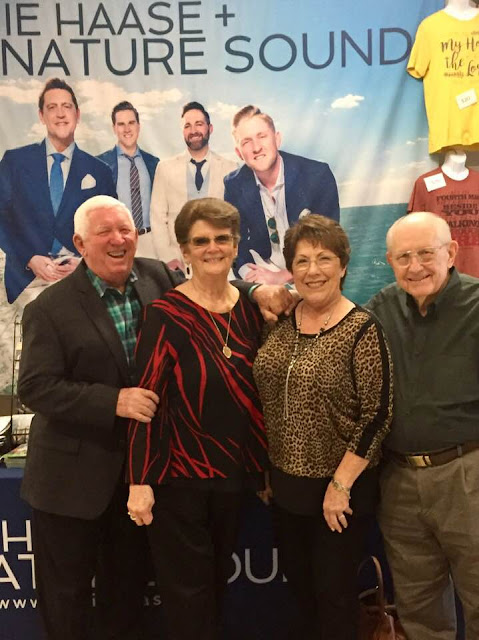 It was good to see these fine folks again, and the good news is that Sandy's hip problem proved not to be arthritis but a bout of tendinitis. After an injection, she feels much better, so we're thankful for that.

After this visit, we set course for Lake Conroe Thousand Trails, where we will remain for a couple of weeks before leaving for Branson, where we will spend Thanksgiving with the family before returning in December for the Christmas holidays. We've also made plans to spend three months in the Rio Grande Valley beginning in January as we follow the sun to a warmer clime.

In the meantime, we're enjoying family time and time with friends here at Thousand Trails. Life is indeed good!