It seems like a bad dream from which we will eventually awake. It has been almost a month since we arrived here, unceremoniously and almost unseen, at this park not far from Prescott, Arizona. Oh, I suppose Phannie was visible outside by whoever was in the office, as the bulk of a motorhome pulling a car is sort of hard to miss. However, almost everything related our visit here has been done via cell phone, from making the reservation to paying our fees. The only personal contact we have had with a park employee was when we arrived a month ago. As instructed then, we called when we were a few minutes from the facility and, upon parking, an older gentleman in a golf cart suddenly appeared, seemingly from nowhere, at Phannie's open door and handed us a clipboard, smiling politely as he stood at the bottom of the stairs.

"Sign the first page and give it back, please; keep everything underneath."

The 'underneath' was the customary park information package you get at every park check-in.

I followed him closely, and, after driving through our site to identify it for us, he sped away, not to be seen again. The whole place is well-manicured, but silent and lifeless. Although the office is occupied by an unknown person who can be seen moving around inside, no admittance is allowed by the guests, and the the large  event center nearby stands empty and locked.

The laundry and mail rooms are open, and there are courts for shuffleboard and boccie ball, as well as a putting green and swimming pool, but they are all eerily vacant. The whole place  seems abandoned, although nicely maintained, as if everyone has just left for the day.

In the parking space beside us, there is a Thor motorhome about the same size as Phannie; on the other side are several empty sites.  There are RVs parked across the street in front of us and in back, as well. The RV park is about 2/3 full, I would estimate. The only time we have conversed with any other person since we arrived was when the driver of the Thor and I happened by chance to be outside our respective coaches at the same time. I greeted him, as I am accustomed to doing, but he was obviously not interested in a conversation, as he quickly went back inside. We still know nothing about each other, for they are rarely seen outside their rig. When the weather is nice, we sit outside on our patio, enjoying the quietness and fresh air.

Although there are several empty spaces in the RV park, we have  seen few arrivals or departures. We rarely see anyone outside their rigs, and when someone does pass by while dog-walking, all we get from them is the return of our wave and, sometimes a returned greeting.  No one stops to chat, even from a safe distance.

In 15 years of RVing, it is completely unprecedented that we could spend nearly a month at a very nice RV park, having virtually no meaningful contact with anyone. This park is part of a much larger complex of perhaps two hundred homes occupied by older residents, as it is a 55+ community. We've driven around the neighborhoods, but we've seen no one outside.  If it weren't for the sight of an occasional auto or golf cart, one would think the place is totally deserted. The streets all look like this: 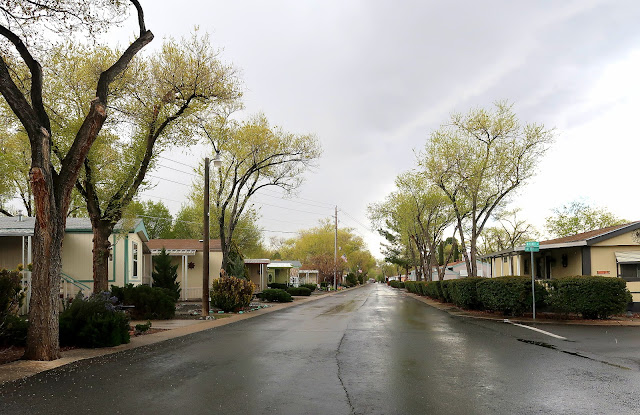 A new section of modular homes had been under construction just north of the older complex like the one in the above photo, but work on that has now ceased, with houses in various stages of completion. It is always eerily quiet everywhere, with only the occasional garbage truck or delivery van to break the silence and to occupy for a moment the empty interior roads.

It seems the ultimate irony that the residents here seem to be practicing social distancing with such completeness in a place so utterly unlikely to harbor a wandering virus. The Covid-19 cases in the this entire Arizona county appears to have leveled off at 63, yet everyone here at this development seems paralyzed with fear.  No one seems to comprehend how unlikely it would be for anyone, even in a crowd, to be infected in this remote area with such a low incidence of illness. A quick calculation reveals that, in this entire county, a person would have only one chance in 4,000 of encountering anyone known to have the virus. The chances are actually much lower than that, for those with the virus would, presumably, be quarantined.

While I'm certainly not advocating social gatherings yet, I think all this cowering in total isolation indicates that fear has replaced common sense here in the mountains in the middle of nowhere. If there were ever a place where opening the economy could begin with little danger to the public, it would appear to be in this area and other similarly remote locations.

Besides our puzzlement over their behavior, the absence of interaction with our neighbors has had little effect on us or the routine we have developed, which is sloth-like, compared to normal times. We do just fine being with each other, but we are also social people, and we do miss the interaction with others of our ilk. Meeting new people as we have traveled across the country has led to our finding some really great friends.

Everything seems to be in slow motion now, and we try to spread out our tasks to perhaps one a day--two at most.  Sandy gamely tends to her household routine until her bum foot becomes too painful, then she has to elevate it for a while. (We're still waiting for the arrival of the new orthotics.) I've completed a few projects needed for Phannie, including replacing the Onan genset's exhaust tip that apparently fell off on the way here from Tucson. I also ran the engine and genset for about an hour to exercise them, taking the opportunity to move the coach a few feet forward for better satellite reception. A limb near the dish has begun to leaf out, and it was interfering slightly with the signal reception. I also cleaned out the lint from the clothes dryer exhaust hose and resealed the outside dryer exhaust vent. Then there are always small chores like replacing bulbs and changing batteries in various gadgets. I see that the refrigerator water filter light is on, so I suppose that will be the next task to be completed. Besides TV-watching and reading, we spend a good deal of time online, taking care of personal business but, mostly, interacting with our friends and family on social media--something that certainly has blossomed during the shutdown.

We make an occasional trip to the grocery store or drugstore--a welcome diversion, since Sandy can't walk very far around the park right now.  The nearest town of any size, Prescott Valley, is about 10 minutes away but, in terms of activity, it is a different world compared to our RV park. Even with many of the stores closed, there is plenty of activity and lots of traffic on the streets. The restaurant takeout windows are always busy, and we see a steady stream of people going in and out of the stores that are open. Few of the people we've seen here were wearing masks or gloves, irrespective of their ages. Do you suppose they also have figured out the huge odds against encountering the virus in this area? Are they daring, reckless or clueless? Who knows?

I couldn't help but compare the difference between teeming Prescott Valley and the virtual ghost town that is our RV park/retirement development. I feel sorry that the fear among these senior citizens is so intense that they mostly imprison themselves, even from stepping outside for a walk. Here's the way the roads look at the front and rear of Phannie's parking spot: 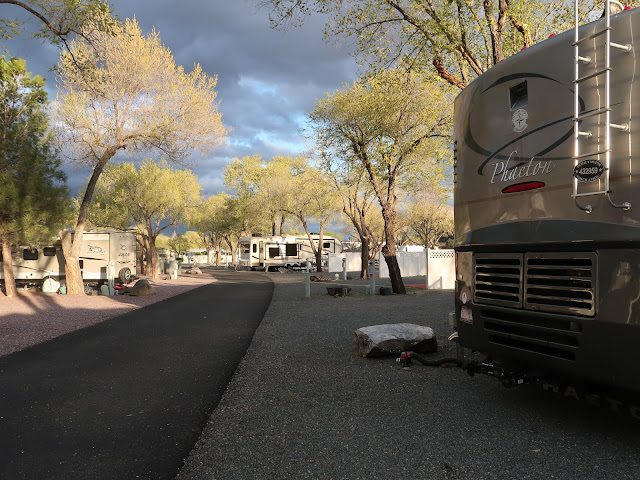 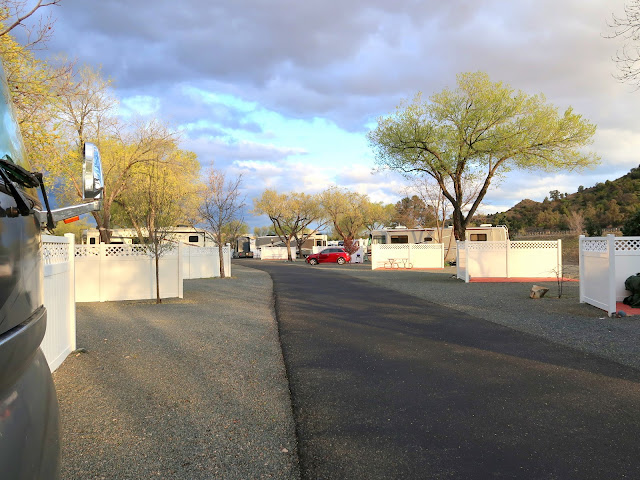 Nope, not a soul visible, and it's like this 99 percent of the time.

I suppose that, considering the 24/7 TV bombardment about the horrors of the heavily-affected areas and the warnings about the vulnerability of the elderly, it is a little easier to understand their phobia. I can't imagine what it will take for them to return to some kind of normalcy.

Since we've nowhere to go (we're paid up through the first week of May), we've never done so much cooking in Phannie as we have in the last month. We have a new Ninja Foodie Grill that I really like. It has been fun getting familiar with it and, so far, we've at least been able to eat the experimental dishes, some of which have been quite good.  Staying put has also cut our outlay for eating out by hundreds of dollars, but we do miss that part of our entertainment.

We also miss personal visits with family and friends, and we are very sensitive to the the terrible toll this virus has taken on the country and its citizens. So far, we don't know anyone who has been infected, but we pray that all our relatives, friends and those who read this stay well.

It seems pretty clear on both sides of the political spectrum that China has played a nefarious role in the spread of this plague and that our country has become far too dependent upon them in many ways. I, for one, will be more diligent in limiting my purchases of goods that I can identify as having Chinese origin.

I'll leave you with one more photo that I forgot to include when we were roaming around Prescott before the shutdown: 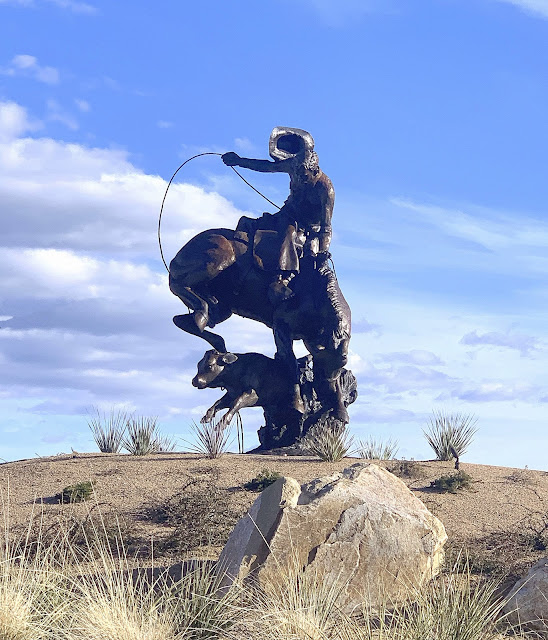 There is a bronze foundry here in Prescott, and the city commissioned local artist Bill Nebeker to do this wonderful sculpture. The foundry fabricated it to a large scale for outdoor use, and it was placed in the center of a traffic roundabout. It shows a cowboy trying to rope a calf while it runs under the horse, causing the horse to stumble and the cowboy to lose his hat. While I'm usually not a huge sculpture aficionado, I really like this one.