I think I mentioned only in the most general terms what we're doing here--even that we bought a lot in this rather desolate and isolated place! Perhaps it would be appropriate to explain our--well, mostly MY--rationale. Sandy okayed it, but she usually gives me more slack in my rope than she should. After nearly 45 years together, we have been through a lot of life phases and resulting schemes--a few of them idiotic--that come and go, and she probably figures this is just one that will be a precursor to the next.  The problem is, we're running out of years; there are many more of those behind us than ahead of us, so we've got to come up with a fulltiming exit plan. The Hondo thing, in my mind, is sort of a 'halfway house' until we figure it out.

Before I get too far into this deep, philosophical explanation, you should perhaps note the title of this post, which has a double meaning. Not only can it be taken as a greeting to the town of Hondo, but its real significance is the hailstorm that accompanied a small tornado that ravaged the park a few days before our arrival. You may have read in previous posts that it had been our intention to occupy our new digs here weeks ago, except for the complications that kept arising from Sandy's multiple surgeries in Houston.

I have included several photos of the result of perhaps the most damaging hailstorm I've seen here in my beloved but sometimes violent state. Some say it was a tornado but, whatever it was, it totaled most of the RVs and vehicles in the park, and I can just imagine what Phannie and Mae would have looked like if we had arrived here earlier as we had planned. Many would say the delay, because of Sandy's medical issues, was simply coincidental, but we think God was protecting us, even though we didn't deserve it, and we thank Him for it. I'll post a few photos of the hail damage all around us when we arrived. It may not have been the worst you've seen, but it was for us: 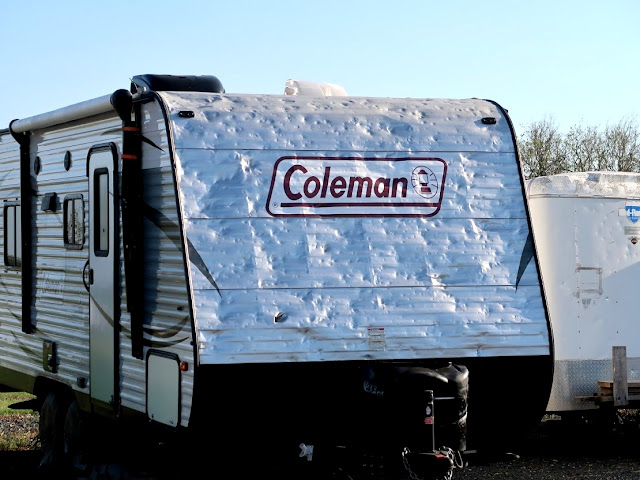 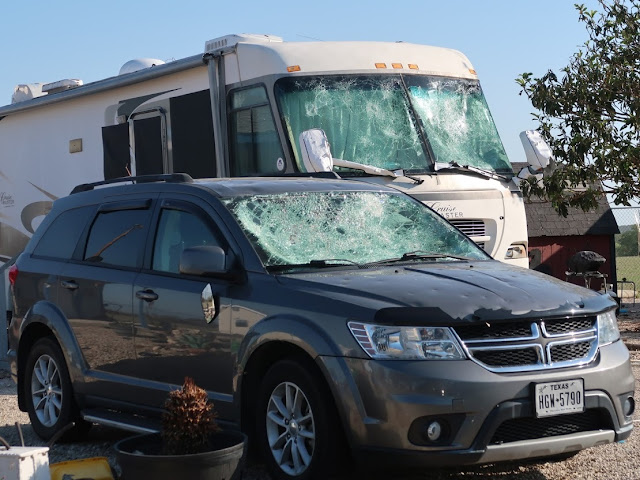 The sun visor didn't spare the Freightliner below from damage. Even though it was parked at the time of the storm, the front grill and the driver's mirror still took a beating along with the windshield: 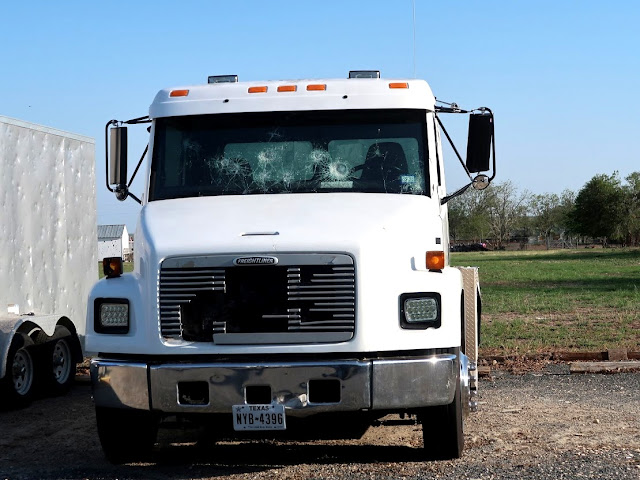 The photo below shows the size of the hailstones that struck this little cabin. I could easily put my fist through some of the holes: 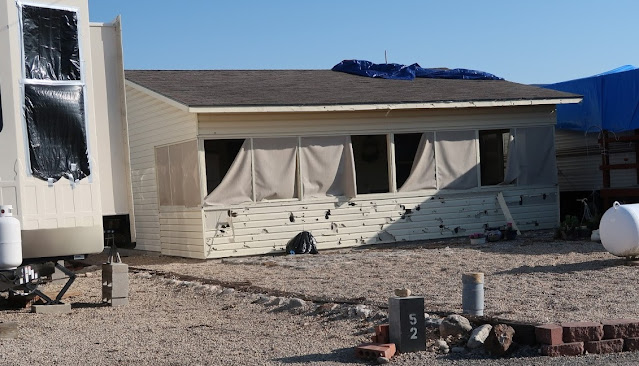 All of the north windows of the events center below were broken out, allowing rain to flood the place: 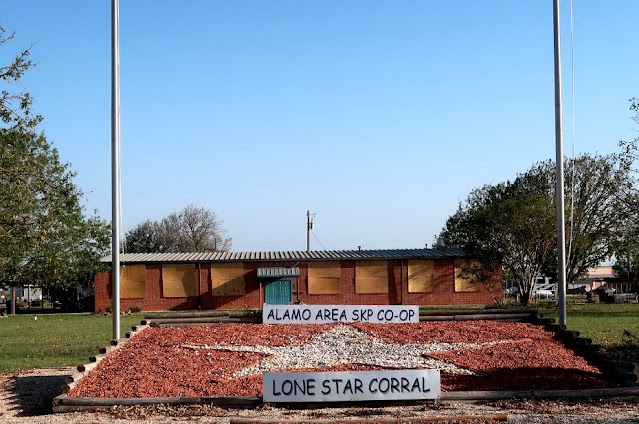 While the little cabin on our lot sustained some damage on the north side, including broken windows, it was, thankfully, much less serious than most of the other structures and vehicles in the park.

We already have plans for some significant remodeling and landscaping for the property, but we are very grateful that it came through the storm with relatively minor damage.

The cabin, by the way, is not meant to be another living/sleeping area; it is merely an all-purpose building where, in our case, we can finally have a place for storing the personal things we don't usually carry with us on trips. It also means we don't have to rent a storage unit, and I will finally get to have a piano again! Our grand piano is still in storage, awaiting a new home with daughter Mindy's family when they move to a larger house. The cabin also has a small workshop and lots of hidden storage space.

Okay, let's get back to the philosophy--or maybe mental breakdown--behind our getting this place. This is an Escapees co-op for those 55 and older, consisting of 124 large lots on 25 acres of land about five miles west of Hondo, which itself is about 45 miles west of San Antonio. All the lots are owned by Escapees members and are deeded for life, unless the owner(s) decide to sell, and that sale can only be made to the co-op, which will sell it to other Escapees members through a process overseen by the co-op management. Because it is a co-op and not run for profit, the price of the lots are very low and are adjusted upward as appropriate through appraisal of any buildings or other improvements that may have been made to the lots.

There is a very modest yearly maintenance fee, and the only utility payment is electricity at ten cents per kwh and TV cable/internet if you want it. The park also has free Wi-Fi. Real estate taxes are a couple hundred bucks a year. It should be dawning on you at this point that the cost of living here is almost nothing. (Well, I guess a tent on the sidewalk would probably be cheaper.) That's why there is a waiting list of 50 couples to buy lots here, and they could be on the list for a couple of years or more before their number comes up.

I can almost hear your asking, "My goodness, are you guys on the ropes financially, then?" Well, hardly; we are quite comfortable. I think we've become far more frugal--perhaps to a fault--as we have aged, and this is a sea change from our younger years when the extravagance and size of one's house seemed all-important, and we took the bait. We quickly learned that such largesse comes with a terrible price besides the monetary expense involved. It has a devastating effect on that thing that money cannot buy--time. We never considered the time and work that would be required for the upkeep of a leviathan-sized house. We found we had no time for anything else or for each other. We didn't own the house; the house owned us.

Now, throw in the fact that we've been living fulltime in Phannie for more than five years. We have been all over the country, to just about every place on our bucket list, and we are quite accustomed to the close quarters; in fact, we've grown to like it. Wherever we go, our house goes with us; there are no bags to pack, no lawns to mow, no weeds to pull, and housecleaning takes about a half hour. Yes, there's a little maintenance on the vehicles now and then, but someone else smarter than I always does that. Nowadays, when we see a big house alongside the road, we just shake our heads as we remember our insane years. Life is a tough teacher; you get the test first, then the lesson follows.

In my quest to disclose the rationale for what we're doing is something almost embarrassing. (Remember, I said 'almost' embarrassing. Old people generally jettison the need to impress anyone or to be embarrassed, along with the disappearance of any filters on the things they say; it's such a relief to be rid of that silliness.) Our foray into this nowhere place called Hondo is just an extension--like fulltiming--of my delight in beating the system. That's why applicants sometimes wait years to get into this place--they've figured it out, too. The more stuff you have--and it's mostly just stuff--the more of your time (ergo, your life) it consumes. No, this lifestyle is not for everybody, but all you have to do is read this blog--now going on its 17th year-- to see what a great time and a great life we've had. Regrets? Like Frank Sinatra sang,.. "too few to mention."

We have more friends now than ever, and some of them have already transitioned off the road. We are in a good place to stay (and still go on RV adventures) while we decide what will be best for us.

Meanwhile, we will be spending the summer in Colorado with some of our RVing friends. Hondo gets a little too warm for our liking during that time. Meanwhile, the park will rent out our lot (not the cabin) for us and split the proceeds. Life is good!

Last, but most important, Sandy is doing extremely well after her surgeries. She's still doing PT for her shoulder, but her recovery has been remarkable. She's more like her old wonderful self every day. Thanks to everyone for your thoughts and prayers.