Sandy's Surgeries Are Done, But I Have Dishpan Hands

It has been a week since Sandy's shoulder replacement surgery, and she is doing remarkably well. We had been expecting a painful healing process, but she only needed moderate pain medication for a few days, then she reduced to Advil, and now--none at all! Physical therapy won't begin for a couple more weeks, though, and that's going to be crucial in her use of her new shoulder. After my shoulder surgery two years ago, I had PT for months, continuing with home therapy for about a year afterward. But it paid off; I have about 95% use of that arm now.

I now have a greater appreciation for the chores she normally does that have now fallen to me. I have no capacity, of course, to do them to her satisfaction, but I figure her fixing what I mess up will keep her from getting bored when she regains the use of her arm.
I even had to do some laundry the other day--for the first time in 44 years!  She was barking complicated instructions over my shoulder, and I think I handled the clothes and the chemicals correctly, but I told her I couldn't possibly figure out the undecipherable controls of the laundry equipment; she would just have to do that with her good hand.
She had the nerve to counter that pronouncement with, "So you're telling me that you, who somehow managed for years to fly jet airliners with more than a hundred passengers aboard, are mystified by a few buttons on a washing machine?"
I really didn't have a good answer for that, but Sandy and daughter Mindy got on the phone later and had the best time defaming me about my supposed incompetence. (Those two could easily become terrorists, I thought to myself.)
Mindy said, "Tyler is exactly the same way; it's conjured-up helplessness!  I told him that anyone who can build a football stadium can probably handle a load of laundry." It was pretty easy to see that Tyler and I were in a no-win situation here, but when I started fumbling with the washing machine controls, I got my hands brushed away (she still has one good arm) and admonished that I "wasn't doing it right." The bottom line? I still don't know how to operate the laundry machine--could that have been my goal all along?
However, I will tell you that I have learned to wash dishes to her satisfaction. And I have dishpan hands to prove it! What humiliation to have to put lotion on my dried-out hands! I shudder to think how far I have fallen. Yesterday I even cleaned the bathroom! That was pretty disgusting, but I got high marks for that one. Making the bed, I suppose, is beyond my capability, according to her. For some reason, she prefers a bed to be made up all prim and properly, looking smooth and finished. My way is to get covers generally on the bed without much of the sheets showing. I mean, really, we're just going to get in it again in a few hours. I never understood all the fussiness.
I can hear you asking just exactly what kind of help I am to her and, besides helping her into and out of the bed and chair and helping her get dressed, I am a pretty decent cook and do all of it...always have.  This has given me a good deal of credit over the years, and I am making use of it these days.
If you know us personally, you will know that most of the above is exaggeration--something I am prone to do from time to time. There's not anything Sandy and I wouldn't do for each other.
Monday will be our last day at Thousand Trails--for good. We are selling our membership, for several reasons. During the last couple of years, we have had the opportunity to visit several TT campgrounds, and at some of them, we just turned around and left.  There are a few very nice parks, like here at Conroe, but many of them are way below our standards. We are not really campers but glampers, I'm afraid. We don't' really care about communing with nature up close and personal and, for us, "roughing it" would be a place where we couldn't receive cell service or satellite TV. We're also highly averse to being parked on anything but pavement of some kind. That will bring a few sneers, but it's amazing how little we care about what others think now that we're getting old.
There's also the fact that we now have our own little place at Escapees in Hondo. That will cut down on our overnight costs. Besides being unimpressed with most of the accommodations, we just didn't get our money's worth with TT, because we didn't use it enough.
We will be in the Conroe area for about another month--maybe longer--as Sandy's PT gets under way. Meanwhile, I'll leave you with another favorite photo from our travels: 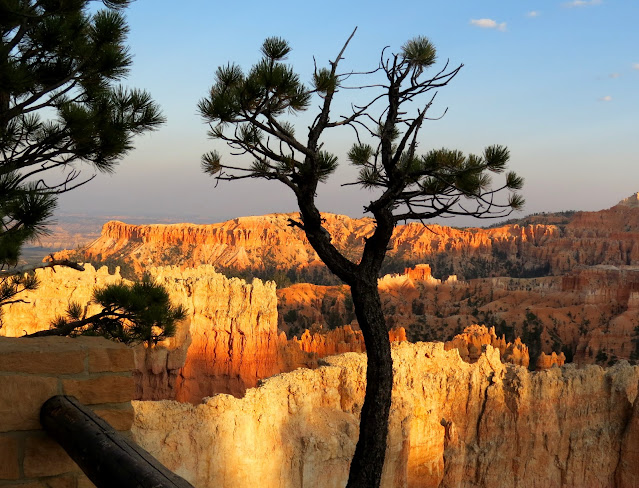 Sunset at Bryce Canyon National Park
Thank you, Lord, for this wonderful life;
please forgive me if I fail to appreciate it each day as I should.
We don't stop playing because we get old; we get old because we stop playing.
---George Bernard Shaw