Ed and Marilyn Pay Us a Visit

Yes, friends, we played hosts to these near-celebrities in the RV blog world.  We had invited them a couple of times to stop by our place near during their semiannual migrations to and from the RGV.  They declined for the silliest of reasons…like the birth of their first grandchild…go figure!
But this time the planets aligned, and Ed and Marilyn appeared right on schedule at the Vineyards in Grapevine, our favorite RV park in the DFW area.  We had spent several months there while our house was being built, and they seemed to enjoy it as much as we did.  They selected a spot within a few feet of the Grapevine, and we were delighted to get a tour of their Mobile Suites home on wheels.  We were duly impressed. 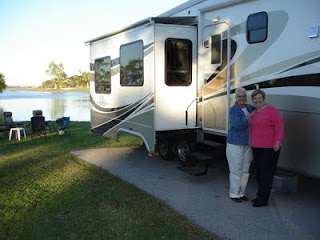 We found these folks to be exactly as we expected, even though we had never before met in person.  Conversation was very easy and laughs were many; it was as though we had known each other for years.  We attribute that to following each other’s journals—so many things about each other we already knew! 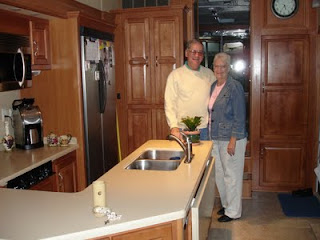 Ed and I had a great deal in common, having spent our careers in flying, and Marilyn and Sandy hit it off splendidly, as both of them are, adorably, a bit wacky.  After admiring their coach, we motored off to the Stockyards in , where we enjoyed a good steak (what else?) 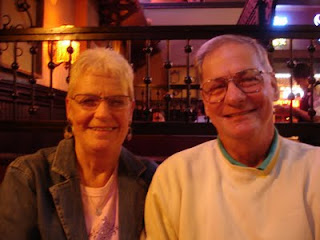 Marilyn and Ed at Riscky's Steakhouse in the Stockyards 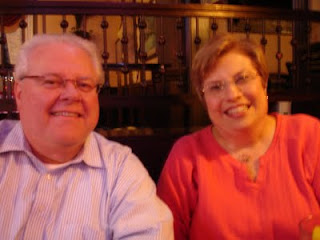 Mike and Sandy Enjoying the Fellowship


Later, I was able to deliver a soliloquy on the importance of the Stockyards in the late 1800s and early 1900s in its location on the .  My history lesson, which I had laboriously researched before our outing, drew mostly yawns--especially from the girls--but Ed, ever the gentleman, feigned as much interest as he could.  Frankly, I don’t blame any of them; the number of animals slaughtered here in 1940 is a fact desperately in search of perhaps eight people in all of  who would be interested in that useless tidbit of information.
After much enjoyment of these fine friends, we bade them farewell for the evening and looked forward to the next day's adventure.
– History and Shopping
This day we paid a visit to the Kennedy Assassination museum in .  Oddly, Sandy and I had never toured this venue, even though we have lived in the area for almost 20 years.  It could be this omission is due to my repressed embarrassment that such a monstrous crime could actually occur in my beloved state.  While the museum was very well appointed and informative, we didn’t think it revealed much new information about the tragedy.  After all, few events of my lifetime have received so much investigation and media attention.  It was sobering, however, to view the actual place where Oswald had crouched to deliver the fatal shots that changed the world.   The feeling most prevalent to me was one of sadness, as I reflected on that terrible day in 1963.  Like everyone else, I remember exactly where I was when I heard the news:  I was in my high school cafeteria; I can even remember the exact table at which I was sitting.
After this, we lightened the mood with a little shopping.  We dropped Marilyn and Sandy at Sam Moon’s, and Ed and I went to Elliott’s, the hardware store that all others would like to be when they grow up.  Ed looked around a good bit, but didn’t find anything he couldn’t live without.  I admired his discipline in this candy store for guys…he really is careful not to clutter his little home with things that are less than essential; I could take a lesson.
We picked up the girls at Sam Moon’s, and Marilyn displayed evidence of a lesser degree of discipline.  She had found a killer purse and coordinating wallet, along with some great looking jewelry.   Before their visit, Sandy and I had thought carefully about suggesting Sam Moon’s, as we knew that Ed and Marilyn, like us, are not necessarily in the “acquisition” stage of life.  However, felt that the totality of Marilyn’s feminine existence would not be complete without her being able to say she had had the Sam Moon experience if the subject ever comes up in conversation.   Having facilitated this rite of passage, I think is able to sleep better now.  What is the Sam Moon experience, you might ask?  Well, if you don’t know, Marilyn has one up on you.
– Entertaining at our Stick House
We had invited Ed and Marilyn over for dinner and a tour of the house (and Homer’s home), and they were gracious and effusive in their compliments.  These people are so warm, personable and charming; it is a shame that such gentility seems to be on the wane these days.  We had a great evening of food, conversation and laughter, and they even let me bore them with a little piano playing.  provided her signature chocolate pie, which Ed seemed to enjoy with a good deal of reverence.
After sadly bidding them farewell, we knew we had new friends whose company we will enjoy again as we cross paths on this incredible journey called life.  Thank you, Ed and Marilyn, for sharing this time with us.
Posted by Mike Mills at 11:10:00 PM 1 comment: