After a month’s confinement, Sandy has emerged from the small world that consisted mainly of her recliner, the TV and the endless hum of the pump that recirculated cold water in the little jacket that enveloped her right knee.  This cloistered existence was not new to us, as she also had her left knee replaced a couple of years ago.  She was not prepared, however, for the more difficult recovery this time. The surgeon said this knee was in much worse shape than the first one, and the pain after the operation was significantly more severe.  We were not surprised at the surgeon’s post-op report, as Sandy was suffering terribly in the last months before the operation.

Because the post-op pain needed to be treated aggressively, Sandy was provided with a high-dose regimen of oxycodone, of which she took full advantage for a couple of weeks.  As the pain level decreased, however, she decided to discontinue its use in favor of Tylenol 3.  This sudden change proved to be a very bad idea, as she had not been clued in to the fact that abruptly stopping the use of oxycodone can have very undesirable consequences.  I won’t go into the details here, but suffice it to say that this was a very harrowing experience for her, the likes of which I hadn’t seen in all  36 years of our marriage.  Information about these side effects is easily available on the web, but we customarily don’t second guess our doctors’ prescriptions, and we didn’t bother to check it out this time.  We may be a bit more inquisitive, however, after this nightmarish episode.   In fact, Sandy muttered something about tossing all the pain meds next time and biting on a bullet.  She seemed serious, but we’ll see.  I certainly hope there will be no next time as, thankfully, she has run out of knees.

After about ten days with a multiplicity of very disagreeable withdrawal symptoms, the dark clouds parted and, on Saturday, Sandy suddenly was her old self again.  Fortunately, she was able to count on the support and prayers of many friends and loved ones during this time.  Her good friend Cathy was especially helpful in that she had recently suffered a similar reaction from this kind of drug and was able to commiserate with Sandy.

We were able to commemorate Sandy’s first real outing on Saturday with a photo as she went (where else?) shopping! 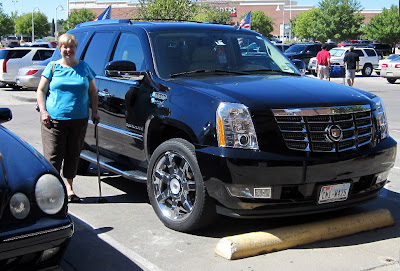 It was only a short trip to the grocery store, but it was a big deal for her to escape from the cocoon of her house like a newly-winged butterfly!  It was gratifying for me, as well, as I had been so aware of how much pain she endured prior to the surgery.  Mercifully, that pain is now gone.  She will be using a cane for a while until her physical therapy is finished and she has gained full use of the new implant.

We feel very blessed to live in a time and in a country where modern medicine can so miraculously prolong quality of life.  I can’t help but remember my grandmother, who suffered terribly with arthritic knees and was unable to walk for most of the time I knew her.  Knee replacement surgery was not available then, as the technique and prostheses had not been developed until the 1970s.  However, I’m very fearful that these kinds of operations may not always be available if a panel of bureaucrats is to decide what my quality of life is to be.  I suppose we’ll know for sure on November 6.
Posted by Mike Mills at 2:20:00 AM 12 comments: