Before I get into the introduction of our new grandson, I need to mention a bright spot in our visit to Fredericksburg besides being with our rally friends. We learned that Paul and Mary, friends who are former fulltimers, happened to be nearby in Kerrville, so we arranged a luncheon meeting at the Alamo Springs Cafe, a legendary burger joint in the middle of nowhere between the two towns. It was great to catch up with them and enjoy their company for a little while: 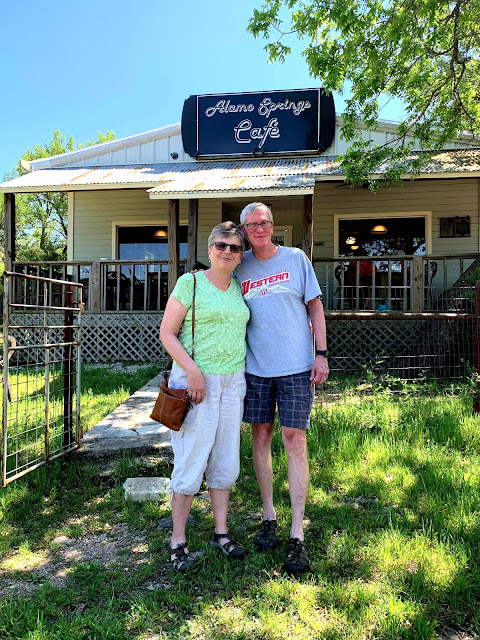 With each passing day after our spills on the sidewalk in downtown Fredericksburg, we are grunting less and moving our limbs a little better, so it looks like we're going to get back to normal before long. But that's hardly as important as the arrival of Sutton Paul Girard, our third grandson and latest object of our affection spoiling. (Yes, it's okay; all grandparents have a license to spoil their grandchildren. It's in the Bible--you know, "spare the rod and spoil the child" in Proverbs. Well, we've taken that to mean that, since none of our grandchildren are named Rod, they're all fair game.)

Now, without further ado, I present Mr. Sutton Paul Girard, born at 2:51 a.m. on April 18, weighing 6 lbs., 5 oz. and 19 inches long, held by Sandy who, through the miracle of makeup, has her bruises well covered: 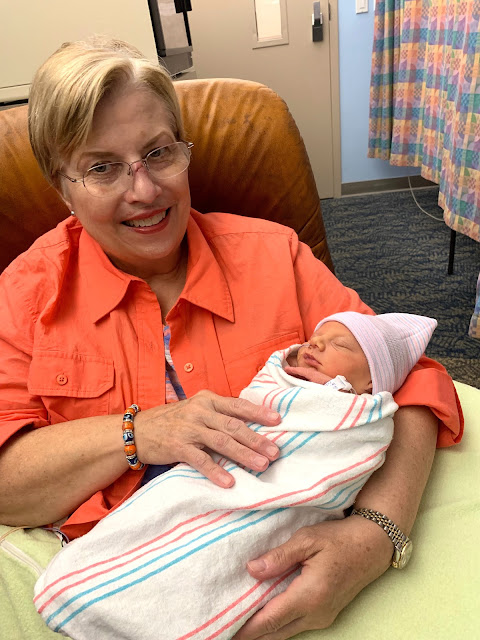 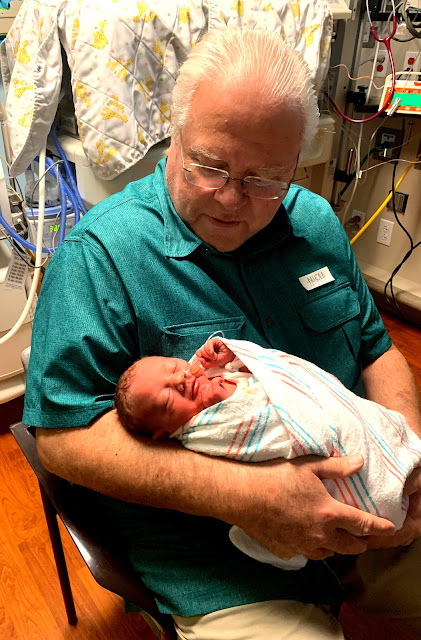 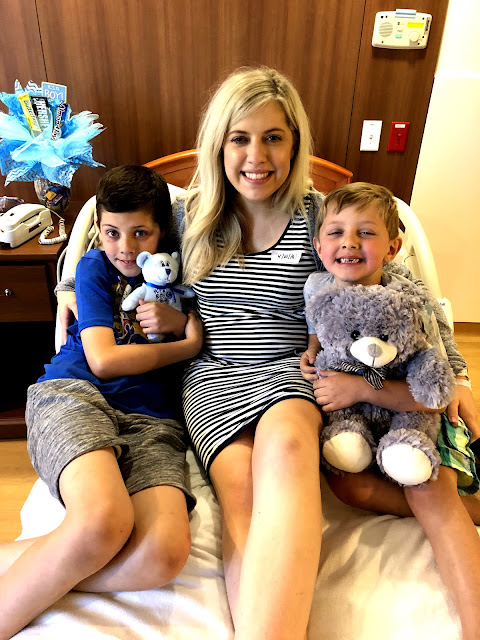 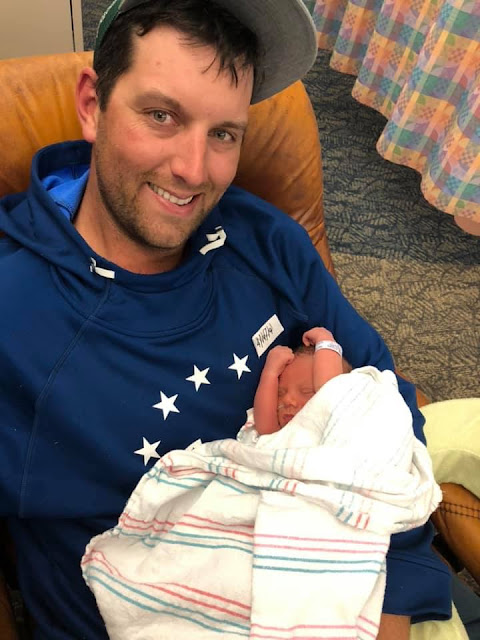 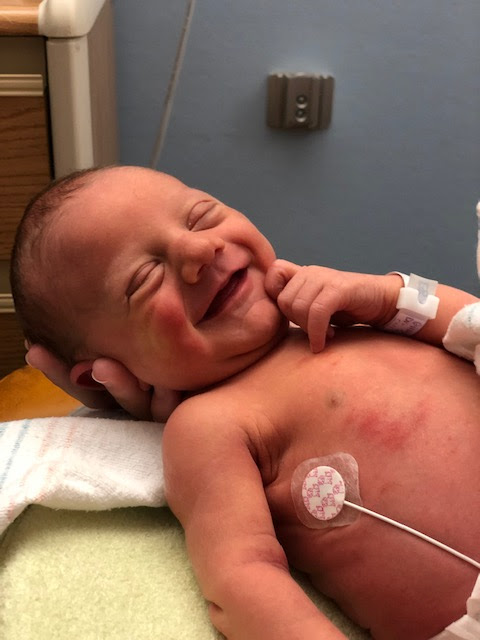 Well, there you have it--a pretty exciting time for our family. We will be hanging around here until early June, when we will leave for Moscow, Iowa and Phannie's new hydraulic jack retrofit at the HWH factory.

We Fall For Each Other in Fredericksburg

This will be a bit of a short post because, frankly, it hurts to type. We arrived in Fredericksburg to attend the rally and were having a great time with our friends. Kathy, Patsy and Sandy decided to go shopping in downtown Fredericksburg one day, and I used that opportunity to go to WalMart and pick up a few things. While there, I received a call from a woman who told me that Sandy had fallen on the sidewalk downtown and that an ambulance had been called. I double checked with her about the location and ran to the car to go to the scene.

Seeing the ambulance, I parked nearby and rushed toward where a crowd had gathered and, as luck would have it, I, too, tripped and fell at the very same spot where Sandy had fallen, both of us face down on the concrete. She had already been placed in the ambulance, and the EMTs then turned their attention to me. We were both bleeding rather profusely from facial injuries, but we didn't appear to have any broken bones, so we decided that our friends, who had also arrived, could take us to the hospital.

After many x-rays were taken, it was determined that the only thing broken was Sandy's nose and her eyeglasses. We both had multiple  lacerations on our faces, hands and knees, and I had a severely bruised knee and a badly sprained shoulder.

As it turned out, there was a rather deteriorated area of the sidewalk, including a hole six inches deep, where we fell. That doesn't exactly excuse our clumsiness, but the area was not cordoned off, even though it was clearly not a new hazard, judging from the grass growing up within it.

We took photos of everything, including our injuries, but I decided not to include them here. Let's just say that we didn't exactly look our best in those photos. And yes, we are considering some legal action; that will be up to our attorneys.

We had several sleepless nights and uncomfortable days afterward and had to delay our departure to Conroe until I felt I was in a condition to operate Phannie safely. This made us a bit nervous, as we knew the arrival of grandson number three was imminent. We made the trip okay, although our procedures for getting ready to travel went much more slowly and painfully than usual. I would like to say one more big thank you to all our friends who came to our aid. You are the best!

Our arrival in Conroe was just in time, as grandson Sutton made his appearance only three days later!  I'll have photos in the next post!

Our three months here have gone by so quickly. Since going fulltime three years ago, this is the longest period of time that we have stayed in one place without Phannie's turning a wheel. I had wondered what it would be like to settle in for a lengthy stay somewhere and, as it turns out, it was just great. Of course, our good experience was in no small measure due to our interaction with so many of the good friends we have made over the years who, luckily, were also here.

Because of the semi-tropical climate we've enjoyed here in the Valley, we admit to having felt a bit guilty sometimes, as we watched the television reports of the record cold weather and flooding that has plagued the northern climes. We are very fortunate to be able to move around the country as we wish to escape such weather extremes.

Over the last couple of weeks, we said goodbyes to the last of our visitors, one of whom was a real VIP--Sandy's sister, Brenda. Here are the two at Arturo's restaurant in Progreso, just across the border in Mexico: 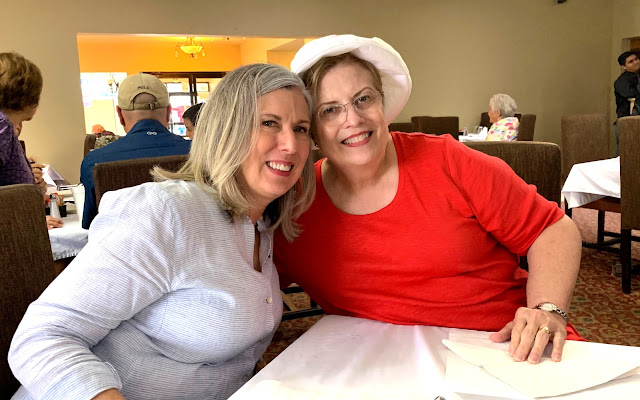 The girls did some shopping (what else?), and one certainly can't go across to Mexico without getting a good supply of inexpensive pharmaceuticals: 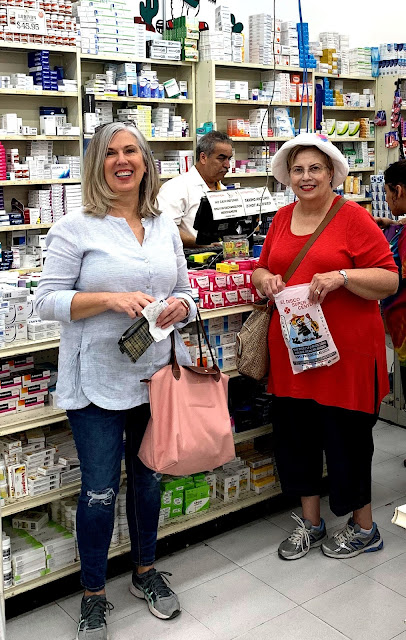 I've heard from many others of their reluctance to spend the winter near the border, but in all the time we've spent here in the Valley and during our many trips into Progreso, we've never felt even slightly unsafe. The border is very heavily patrolled in this area, and the citizens of Progreso are smart enough to know that their very livelihood depends on the frequent return of winter Texans--something that would dry up quickly and devastate their economy if there were reports of criminal activity victimizing them in that location. I'm not sure how the Mexicans control it so well there, but it is indeed fortunate that they do.

Another couple of our friends who are also heading northbound were nice enough to stop by and accompany us to dinner at our favorite Mexican restaurant in Harlingen, the Las Vegas Cafe. Denny and Jackie live in Illinois and winter here in the Valley. They are delightful people who are a hoot to be around, and we feel so lucky to have met them. Safe travels, y'all: 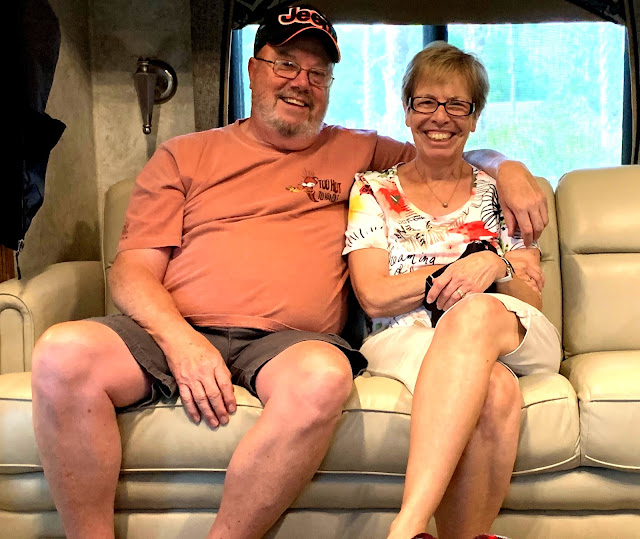 On a recent particularly sunny day, I called Jesse, our favorite RV cleaner, to come out and give Phannie a good washing and waxing. This is always a must-do while we're in the Valley each winter, as Jesse does a great job for less than half the price anywhere else. 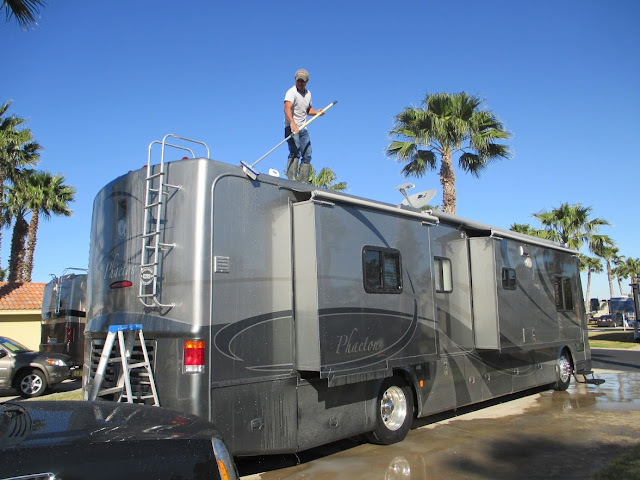 As I make the final preparations for Phannie's departure, I look down our street at the now-empty spaces--a radical difference from in January when we had only four spaces to choose from among more than a thousand in the park. 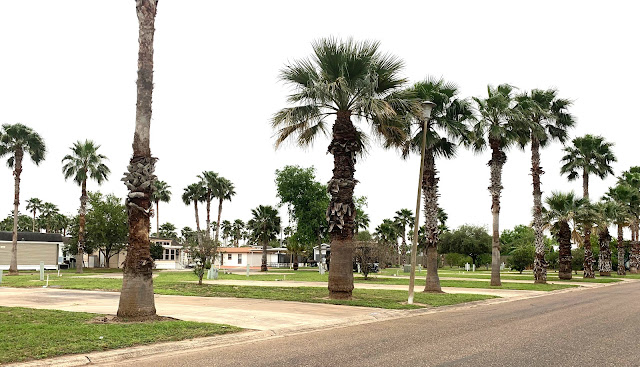 When we arrived, we found that we had been assigned a space in an area where our neighbors were almost all Canadians. They were polite and waved but tended to fraternize with each other rather than outsiders. This was quite a surprise, as RVers of all origins are usually much more friendly and sociable than these folks. But it was fine; we had lots of friends around the area and actually weren't at the coach all that much.


It has been a great winter for us, except for the peculiar feeling that we didn't really have a winter this year. Yes, there were a few cool spells while we were here, but the temps never got even close to freezing. There was never a time when we needed more than a light jacket.

We are headed from here to Fredericksburg, Texas, where we will join up with a rally held by our club for Tiffin owners, the Texas Bluebonnet Allegros.  Because of our change in status to fulltimers, we aren't often in the area, and we're looking forward to meeting up with these friends again. It's been too long.

After that, we'll be headed to Thousand Trails at Lake Conroe, where we will see more of our friends and await with great anticipation and excitement the arrival of our newest grandson in a few weeks. Stay tuned!