As I get older, I'm finding that I give a good deal more consideration to those persons, activities and things that make me comfortable or at least that reduce stress and strain.  The last several posts are replete with examples of creature comforts we have added to Phannie, and I've just acquired a couple of new ones.


In terms of relieving stress, my recent acquisition of a TireTracker tire pressure monitor was essential. 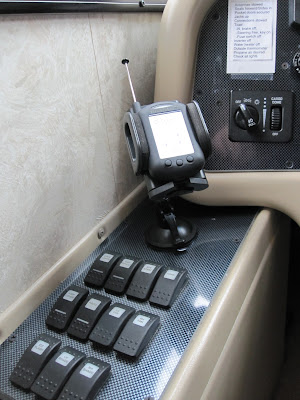 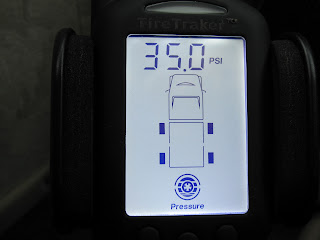 This replaces my PressurePro system, with which I've had nothing but trouble.  I know many folks swear by that brand, but I just could never get the thing to work right.  I've made one trip with the new system with the sensors installed only on the wheels of our toad, Mae.  I must say, this thing is a jewel!  Not only is it the least expensive of all the monitors I've seen, it is no larger than an iPhone, easy to operate, wireless, and it requires no booster to display Mae's tire pressures, even though she's WAY back there behind Phannie!  It monitors temperature in addition to pressure, and I'm now going to order six more sensors for Phannie's tires.


This was a great stress reliever, as I had become increasingly worried about pulling Mae with the Pressure Pro system inoperative.  I figured it was only a matter of time until one of her tires would go flat, and it is doubtful that I would know it way up in Phannie's cockpit without a tire monitor alarm.  The rear TV camera was of little help, as Mae's wheels are not visible on the monitor screen in the cockpit.  I knew that Phannie's powerful engine could drag Mae for miles--probably even  with a wheel missing--and I would never know it unless another driver alerted me.   I feel much better now about this.


The other purchase was an LED light fixture to replace the cheaply-constructed one over Phannie's entrance door.  The old fixture was the el cheapo kind with the orange plastic lens that you see on, well, 487,000 other RVs.  These flimsy things have been installed on every RV I've owned and they have been an unending source of irritation.  The model originally installed on Phannie was a slightly heftier metal version, but it was no less cantankerous because of its frequent jettisoning of the stupid plastic lens cover! I had bought a couple of cover spares before it dawned on me that they were probably designed to pop right off any time you run over a bump in the road bigger than an acorn.  I'm sure there's some dude sitting on the beach in Key West right now, watching the sunset and thinking about his good fortune in inventing those pop-out lens covers.


I ordered this fixture from Camping World, and I love the cool light and modern look, and the LEDs will last a very long time.  It was easy to install and, best of all, it has no plastic cover to lose! 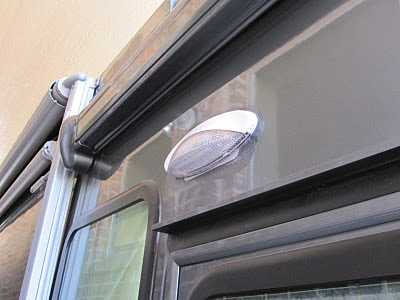 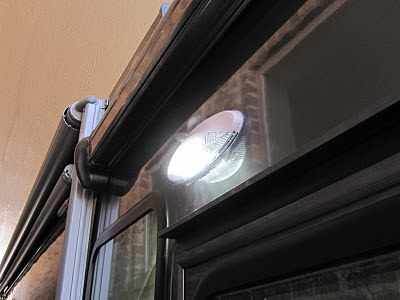 One is wise to perform a degree of introspection before entering the world of RV ownership for a number of reasons, not the least of which is the degree of tolerance one may have for annoyances like dealing with mechanical stuff that breaks down.

RVs--especially motor homes--are, by design, fiendishly complex because of the difficulties in marrying a house and a vehicle. In terms of opportunity for things to go wrong, you get the worst of both worlds. The degree of complexity follows a general formula: The more expensive the RV, the greater its complexity and the number of things that can break.  There is also another irrefutable fact:  Breakdowns will occur at precisely the most inconvenient time and at a location that has been devoid of human beings since the Mesozoic Period.
The fact is, motor homes are marvels of engineering and, in terms of reliability, are much like airplanes, in that there is almost always something wrong with them; and I know a few things about airplanes, having flown them many thousands of hours in my flying life. The difference is that the large passenger-carrying airplanes I flew are built with redundant systems, so that when something critical fails, there is a backup to lessen the likelihood of a catastrophe.  In fact, airlines are permitted to operate their aircraft with certain components inoperative, but these are tightly controlled through the use of a Minimum Equipment List, approved by the FAA, that sets forth those things that are "go" or "no go."  Most passengers would be surprised to learn that the aircraft on which they are flying is more likely than not to have something wrong with it.  This appears to be true of motor homes, as well.


Now, you may be thinking something snarky like, "Well, duh! What exactly did you expect in buying one of these mechanical monstrosities?"


Actually, I was fully certain there would be more maintenance issues when we traded our fiver for Phannie, and this has proven true.  However, I still think the positives outweigh the negatives if traveling comfort is the primary consideration and, of course, it is, as I was definitely built for comfort and not speed.


Lately, Phannie has suffered a couple of additional mechanical discrepancies (that's aviation industry terminology for mechanical things that are broken; a pilot knows that it's much less alarming to tell passengers there is a "mechanical discrepancy" than to say something is "broken" or "busted" or "crapped out" or "tango uniform"--an impolite pilot term that I probably never used).  It's for that same reason that, as an airline passenger, you may hear an announcement from the cockpit asking if there is a doctor on board, but you will never hear a pilot asking if there is a mechanic on board!  But, I digress.


I'm a little reluctant to chronicle all of Phannie's mechanical issues, lest someone gets the idea I consider her a "shop queen."  Well, I don't but, because she is a 2006 model, it would be unrealistic not to expect some problems to be appearing.  On the positive side, there have been no issues with the high-cost items like the engine, transmission, chassis, appliances, etc.  Besides the one broken wire that affected the engine's computer, most of Phannie's "discrepancies" have been related to convenience items.


Except for one instance--the broken wire that required a tow--the repair costs have been sufficiently low that they have not reached the level of the insurance deductible. So, I've decided that, by blogging about these hiccups, I'm not complaining, but figure I may provide a little insight that may be useful to someone considering the acquisition of a motor home:  Here's the bottom line:  Mechanical problems are inevitable; it's all about how you deal with them and whether you have a history of being arrested for assault.


I drove Phannie down to Vogt RV in Fort Worth to have the slides inspected (recommended by Tiffin every six months) and a repair done to the electronic brain that controls the coach levelers.  This brain--actually a black box--is located in one of the forward cargo compartments.  The mechanics found that the levelers' control box  had not been properly secured to the ceiling of the cargo bin and it was hanging down, held at a crazy angle by its wiring bundle.  This was creating problems with the levelers, as the electronic gadgetry had no internal reference as to what "level" is because of its cockeyed position.  The Vogt mechanics did a great job securing the box back to its level position, and all the levelers work fine now.


Soon afterward, I found that the power awning would not extend.  At the same time, a faint beeping noise began sounding from inside the cargo bin where, among other electrical components, the black control boxes are located for the levelers and the awning.  I didn't connect the awning failure and the beeping, but I could tell that it was in the general area of all the electrical stuff I mentioned.  Because the beeping was not very loud, I elected to shut the cargo door let it beep until I could get a mechanic to look at it.  By the time I got around to calling Jesse Sees, my favorite mobile RV repair guy, the beeping had sounded for a couple of weeks!  When people came over, they would invariably ask, "Why is your coach beeping?"  Embarrassed to tell them I didnt' know, I made up answers like, "It's the alarm system," or, if it was an older person who asked, I would say, "What beeping?"


When Jesse arrived, he quickly found the problem.  The wind sensor had failed (retracts the awning automatically when its gets windy), and the beeping was a fault alert.  Because the awning's brain was located in a corner, I did not notice the little switch on the outside cover that disables the alarm.


Since the wind sensor was not something I considered worthy of repair, I told Jesse just to turn off the switch, and he collected eighty bucks for his mighty effort and the service call.


These are the little revelations that come my way as I get used to Phannie.  Let's hope the learning phase is done before my cash supply is done.