This has been the longest period of time--more than two months--that we have been away from our domicile near Fort Worth, and we were more than delighted to have missed all of the frozen winter weather mess that would have entrapped us there. As spring is approaching, we have made our way northbound from the Rio Grande Valley, where we stopped again in the Corpus Christi area, this time at the Colonia Del Rey RV Park. We only intended an overnight stay there, but we wound up staying almost a week to wait out some really rainy spells that kept us largely immobile. There is just nothing like being retired and untethered to the responsibilities of a job and other things that require us to be somewhere at a specific time. Since I don't like driving Phannie in the rain, I generally choose not to do so unless there is a thoroughly compelling reason. So, we wait out the weather and travel when it suits us.

We occupied our time visiting some favorite restaurants, doing some sightseeing and, of course, some shopping--inspired entirely by Mimi, as Sandy is called by her grandsons. Since I am not what you would call an avid shopper (I would rather have a rusty ice pick hammered into my temple), I pretty much served as her chauffeur. Thereby unfettered by any oversight (she says going shopping with a husband is like going hunting with a game warden), Mimi fulfilled with great energy her self-appointed role as the major purchasing agent for her grandsons. In this role, she has no equal, and she certainly doesn't tolerate well any petty little annoyances like the mention of a budget limitation. After a few missteps early on in our marriage, I have now have had enough 'guidance' to accept gracefully this inconvenient truth: It is my job to put money in our accounts, and it is her job to distribute any excess as she sees fit!

With better weather, we continued our trek northward through the Houston traffic mess and out the North Freeway to Spring, Texas and Rayford Crossing RV Resort, which is very close to Mindy and Tyler and their boys. We're guessing the grandsons may be the reason we keep gravitating back to this place. What do you think?

When we're here, we try to help out by cooking things the boys will like (surprise, surprise!). The Pioneer Woman's recipe for chicken spaghetti is a favorite: 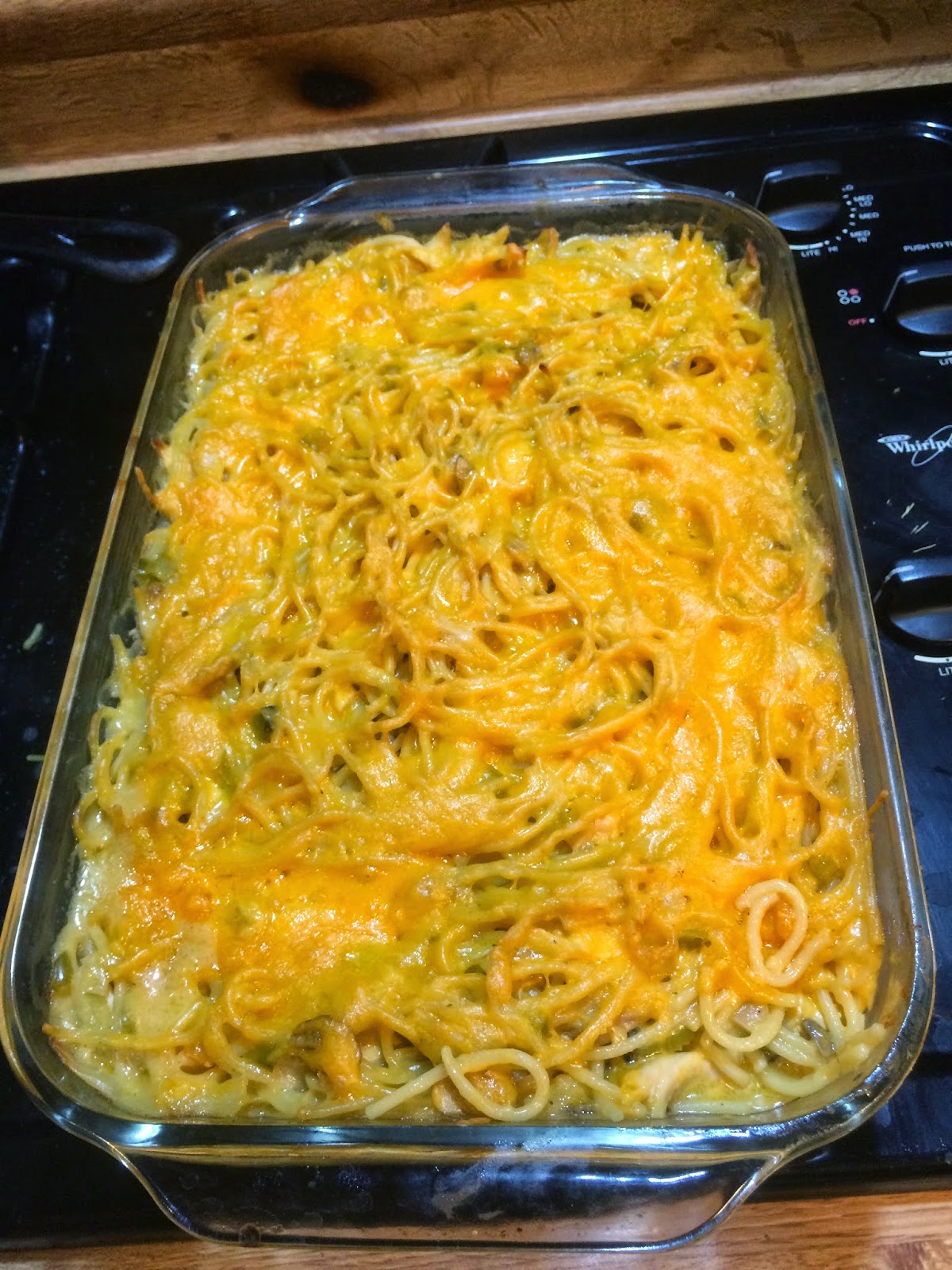 Brownies are always a hit: 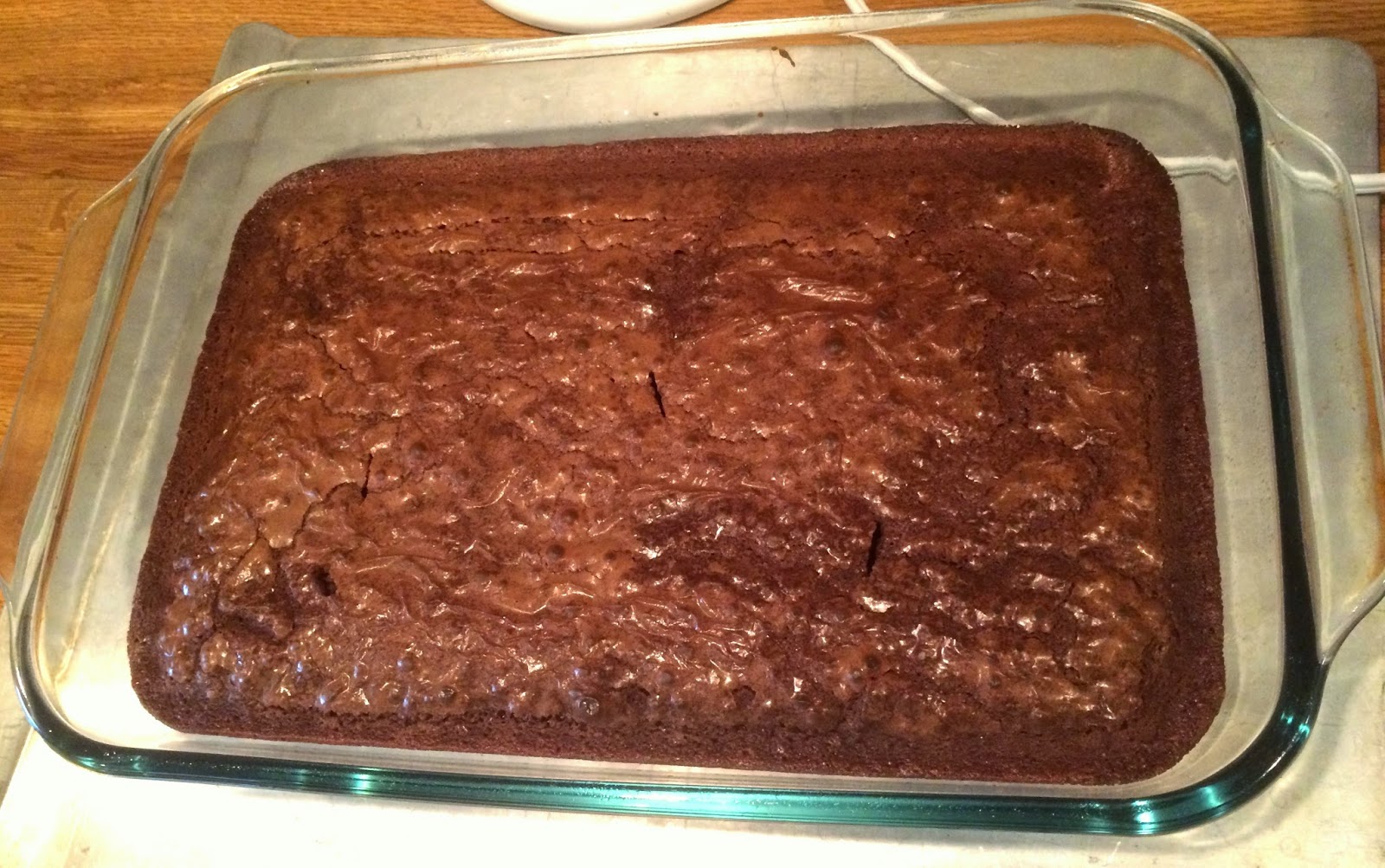 Sandy, who almost never bakes anything from a boxed mix (she is fearful that her mother and grandmother would look down and not approve), uses a modified brownie mix--Pillsbury Milk Chocolate--to make them, and I have to agree: Brownies made from scratch cannot possibly be this good. The modification? She uses whole milk instead of water and adds a teaspoon of vanilla.

Our time here in Houston is growing short, and we will soon be returning home to take care of taxes and medical appointments and refilling some prescriptions.  Once that is done, we will be on the road again. Oddly, our stick-and-brick house has become little more than an expensive place to store the stuff we never use, including a wardrobe that is far too excessive. I'm sure we will reach a point when we will shame ourselves into dealing with this, but that time has not yet come.

As I fret to fulltimer RV friends about these excesses and as I continue to tweak the worrisomely cantankerous security system at the house, they wonder why we don't just pull the plug, sell it and get rid of the security worries and upkeep expense and headaches. On the other hand, other friends who don't "get" our nomadic lifestyle scratch their heads at our wandering around, unable to imagine how anyone could contemplate such a thing. Some of these folks would even be perfectly content working, robot-like, at a job until they collapse at their desks. Or, if retired, they may be content to busy themselves with the officious rituals of housekeeping or perhaps shopping for the perfect faux flower arrangement to "freshen" their largely unused powder room. That's fine, I suppose, but for me, such things would be utterly unimaginable at this stage in our lives.

I would hope that everyone could eventually gain at least a partial realization of the almost incomprehensible miracle of God's gift of life. It is infinitely more likely that you shouldn't have existed at all, except for an impossibly offchance and fleeting union of two cells that would grow, under difficult circumstances, to become you and all that your life has meant to yourself and others. Whether you consider such a thing God-inspired, as I do, or mere blind chance, it is still a miracle, and life should be treated as precious until the last breath leaves the body, in my view. If you accept such a premise, then the look of the faux flowers in your powder room achieves a little less significance, in my way of thinking.

Now that we have both retired, we have become quite introspective about what will be important in our remaining years. There is nothing quite like the contemplation of your own mortality to bring into focus the need to identify those things that we know we will regret not doing while we're able. The conclusion I have reached is that any day when I choose to be confined without purpose within the four walls of a house is a precious and irretrievable day I will regret wasting. Any day that I spend enjoying friends and family or being out on the road observing the magnificence of God's creation or going to church or merely relaxing with a good book, is a day that I will never regret. And the urgency of going, seeing and doing is driven by the realization that we are not guaranteed tomorrow or even the rest of today, for that matter. The time is now; the day is here. Carpe diem!

Thank you, Lord, for the wonderful life You've given me; please forgive me if I do not appreciate it enough each day.

Spring's Around the Corner - Must be Time to Head North

As we watch on TV the demolition derby taking place on the icy roads of north Texas, we feel almost guilty for having enjoyed the mild weather among the palm trees here in the Rio Grande Valley. (Notice I said, almost guilty.) Since the first day of spring is only two weeks away, we will soon be making our way northbound again, hopeful that ol' man winter has gasped his last blast. But what a blast it was, with record snowfalls in some areas back home.

We had a nice visit with old friends in Mission, lunching at the Thai Red Chili restaurant with Ed and Marilyn, Mike and Marian and Chuck and Coletta, all fine folks with whom we shared a great deal of laughter along with the good food.

We also made some new friends, John and Bobbie Jo, who hail from a small town near Dallas and who were also parked in Llano Grande. We ran into them at Salazar's, a popular burger joint in Weslaco, and we enjoyed greatly their company at a number of restaurants in the area after our initial meeting. We now feel we've known this friendly couple forever.


This is not an unusual occurrence in the RV community, gladly. Most of us are retired or nearly so and enjoying life on the road, and our common interests are already established to a degree.

We thought the replacement of Phannie's potty in Rockport would fulfill our quota of her maintenance issues on this trip, but we were wrong. While we were watching TV one evening, we heard a pop and began to smell electrical smoke. I raced outside and opened one of the belly cargo doors to be greeted by a good deal of smoke wafting out. It appeared to be coming from the water heater, so I quickly returned to the cabin and checked the water heater's circuit breaker, which was indeed tripped. The smoke dissipated in a few minutes, and the next morning I phoned Dennis, whose name was given to me by the park management. He is a fulltimer who spends each winter in Llano Grande and keeps busy seeing to the needs of the many RVs in the resort. He quickly found the culprit: The electrical receptacle into which the heater was plugged had failed and was heavily charred along with the plug on the end of the power cable. We were glad it didn't catch fire! We also had Dennis replace the electrical heating element that had become encrusted with minerals over time.

We also noticed a van on a nearby street advertising carpet cleaning, so we contracted with them to give Phannie's carpets a good cleaning. All About Floors (956) 463-2484 did a fine job, and we highly recommend them. Lee, the owner, was very friendly and professional.  (FYI: All About Floors also does RV floor replacements.)

﻿
Here are a few comments about eatin' joints we've tried:

Salazar's in Weslaco - Great burgers. Don't bother to order a double meat; the patties are huge.

Casa de Mariscos in Weslaco - Wildly popular among locals, probably because the servings are enormous. This place is in cahoots with Salazar's burger joint across the street...probably owned by the same family. I recommend the seafood over the Mexican dishes; I had some outstanding shrimp tacos, and our companion had the garlic grilled shrimp, which was also very good. Did I say portions were huge? One entrée is plenty for two people.

Don Beto's in Mercedes - A café favored by locals. Everything is homemade, tasty and cheap.

Lin's Chinese Buffet in Weslaco - One of the best we've tried for freshness and variety.

Nana's in Weslaco - Great taco joint that occupies what was once a house. Everything we've had here was terrific.

Milano's in Weslaco - Good Italian food in another restaurant fashioned from a former house. Great service and friendly staff also.

Lone Star Barbeque in McAllen - We must have been there on an off day. The brisket was dry and not very smoky, and the ribs were way overcooked and had a peculiar flavor. The fried catfish, however, was quite good.

Thai Red Chili in McAllen - This was our second visit and, unfortunately, we were a bit disappointed in comparison with our first visit. The food was fairly good, but it had been allowed to cool too much before serving, and the service was confused and slow. Maybe next time, they'll have it more together. The company was what was important, however; that, as always, was superb.

Thank you, Lord, for the wonderful life You've given me;
please forgive me if I don't appreciate it enough each day.