The Ravages of Hitch Itch: A Taste Test of Fake Chili

When I stay in one place for a long time, as we have done here near Houston, 'hitch itch' begins to set in, and it seems to do strange things to my otherwise stable (I think) stream of consciousness. For example, I had the notion the other day that I needed to investigate fake chili from the supermarkets to determine which brand tastes best. Now that's not something that pops into my head every day.

I suppose it's because I posted recently about how I cook chili, saying that I usually throw in a can or two of fake chili to thicken up my own version. It occurred to me that I had never tried more than a couple of brands of the canned chili offered in grocery stores, probably because I grab them quickly, due to the potential for embarrassment if anyone I knew were to see me buying it. However, that likelihood is small down here, so I thought it was high time I stepped up and identified the best of these fake chili-like concoctions if I'm going to have the gall to use them. (I call "fake" any chili that's not homemade.)

So, here are the brands of canned chili we tried: 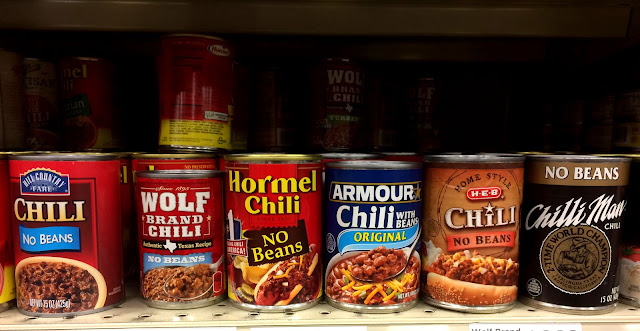 Since we were in an H.E.B. store, we included the two store brands, Hill Country and H.E.B. The most expensive brand was Chilli Man; Wolf Brand was perhaps the best known. I roped Sandy into helping me do the sampling. Rolling her eyes, she reluctantly agreed, much like she would to keep a patient calm in an asylum.  (By the way, the Amour brand we tried had no beans, like the others pictured. I merely grabbed the wrong can for the photo. As I've said before, real chili is not supposed to have beans in it. It's a transgression you wouldn't want to mention here in Texas--there are a lot of gun toters in these parts.)

Anyway, psyching ourselves up to taste this stuff, we agreed that Armour, to our surprise, was the best, followed by Chilli Man, Hormel and Hill Country. H.E.B. brand and Wolf Brand tied for last place. (I have never liked anything about Wolf Brand Chili.)

These were much better, in our opinion, than the canned chili. They almost tied in the taste test, but we think the Texas Chili won out over Owens, but only slightly.

So what will we do with all the leftover chili? Well, I'm tossing out the losers--Wolf and H.E.B brands--and I'll use the rest as thickener in a big pot of chili I'll be fixing in a few days.

Yes, indeed, the idle mind is the devil's workshop, isn't it?

I've been sharing in previous posts how we've had to get accustomed to buying smaller amounts of food more often due to the space limitations we have. However, there are some foods that you just can't usually buy in small quantities--like bacon and sausage, for example.  A one-pound package of each lasts us for a very long time--longer than we would want to keep it in the refrigerator. The obvious answer, of course, would be to freeze the packages and just use them when you need them. The problem with that is the difficulty of thawing out the whole package when you need only a small portion.

Well, we've solved that dilemma by swerving into a system of re-portioning the large packages into serving-sized pouches and freezing them, thawing only what we need on a given day. It's not exactly rocket science, but it works for us. 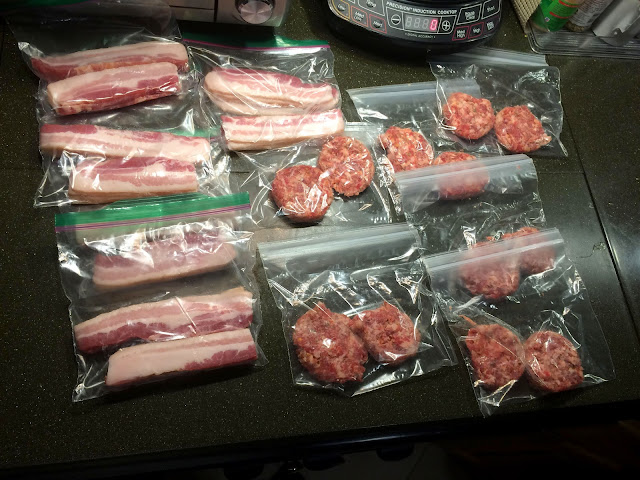 The meal-sized packages then fit into a large zippered bag: 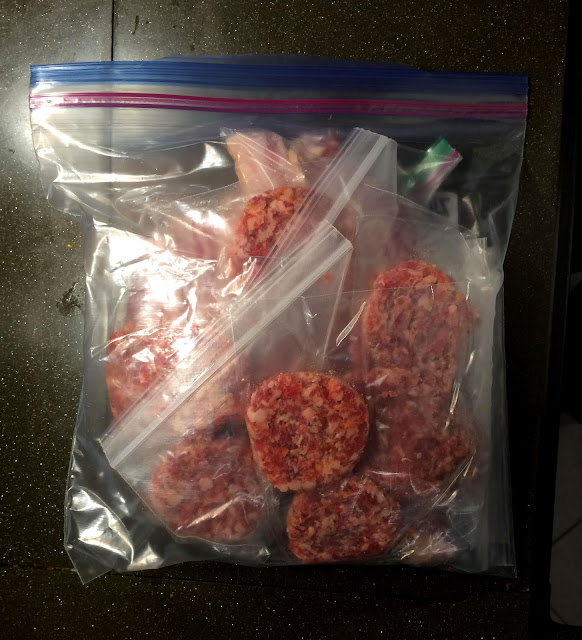 Well, there you have it--a couple of foodie tips from a mind that's been idle too long. Happy travels, y'all...take me with you!

Thank you, Lord, for this wonderful life; please forgive me if I don't appreciate it enough each day.
Posted by Mike Mills at 9:24:00 PM