Catching Up at Home Port

At home near Fort Worth, Texas...

Spring is here for sure! Our redbud trees greeted us with full blooms when we arrived from our snowbird trip to south Texas. 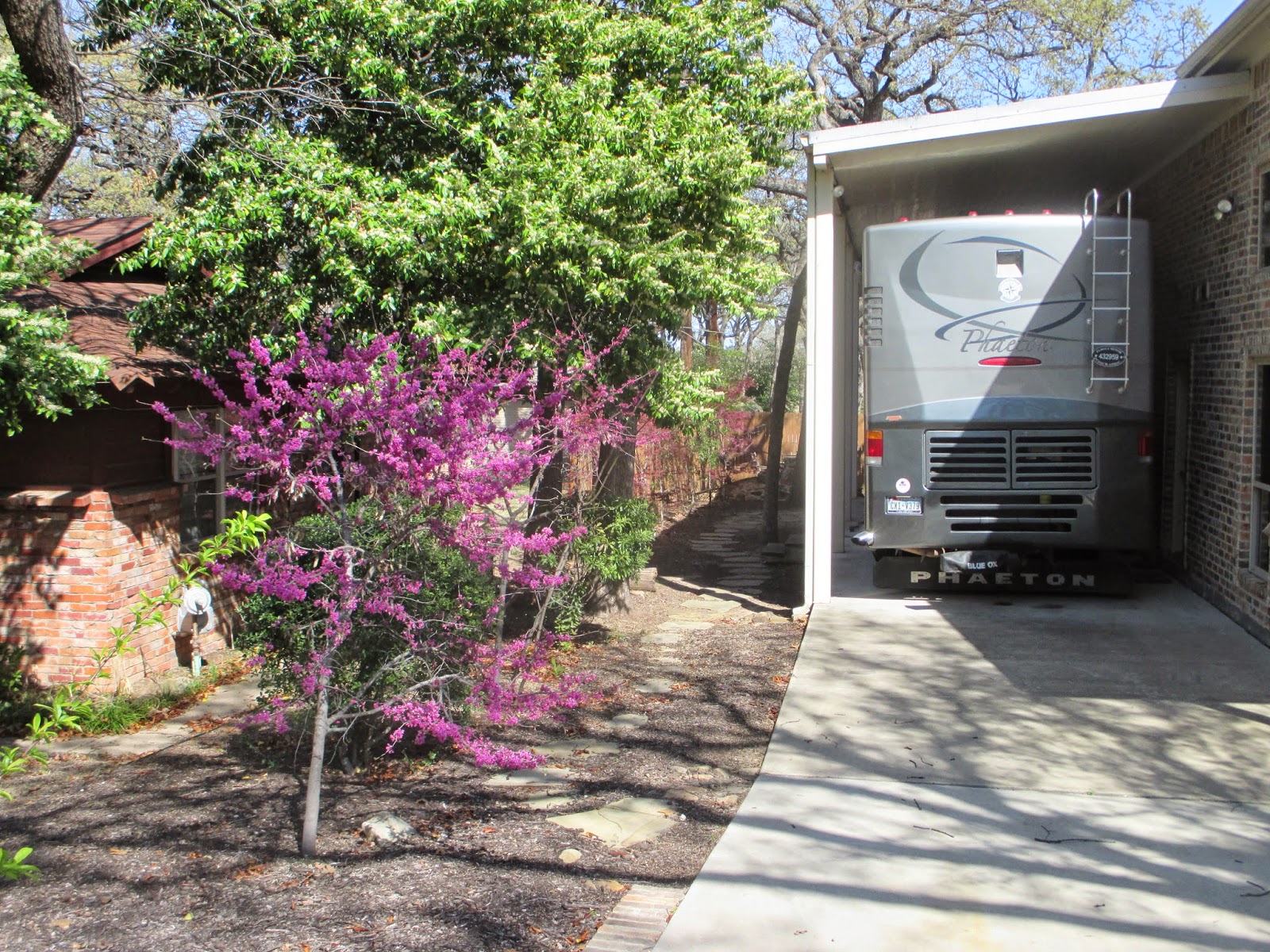 At the end of a trip, Phannie's final turn into her driveway precipitates a flurry of activity in the transition from RV living into  stick and brick house living. I typically park short of the RV port temporarily, to allow full access to the belly compartments; then I pull all the way in after unloading is done. 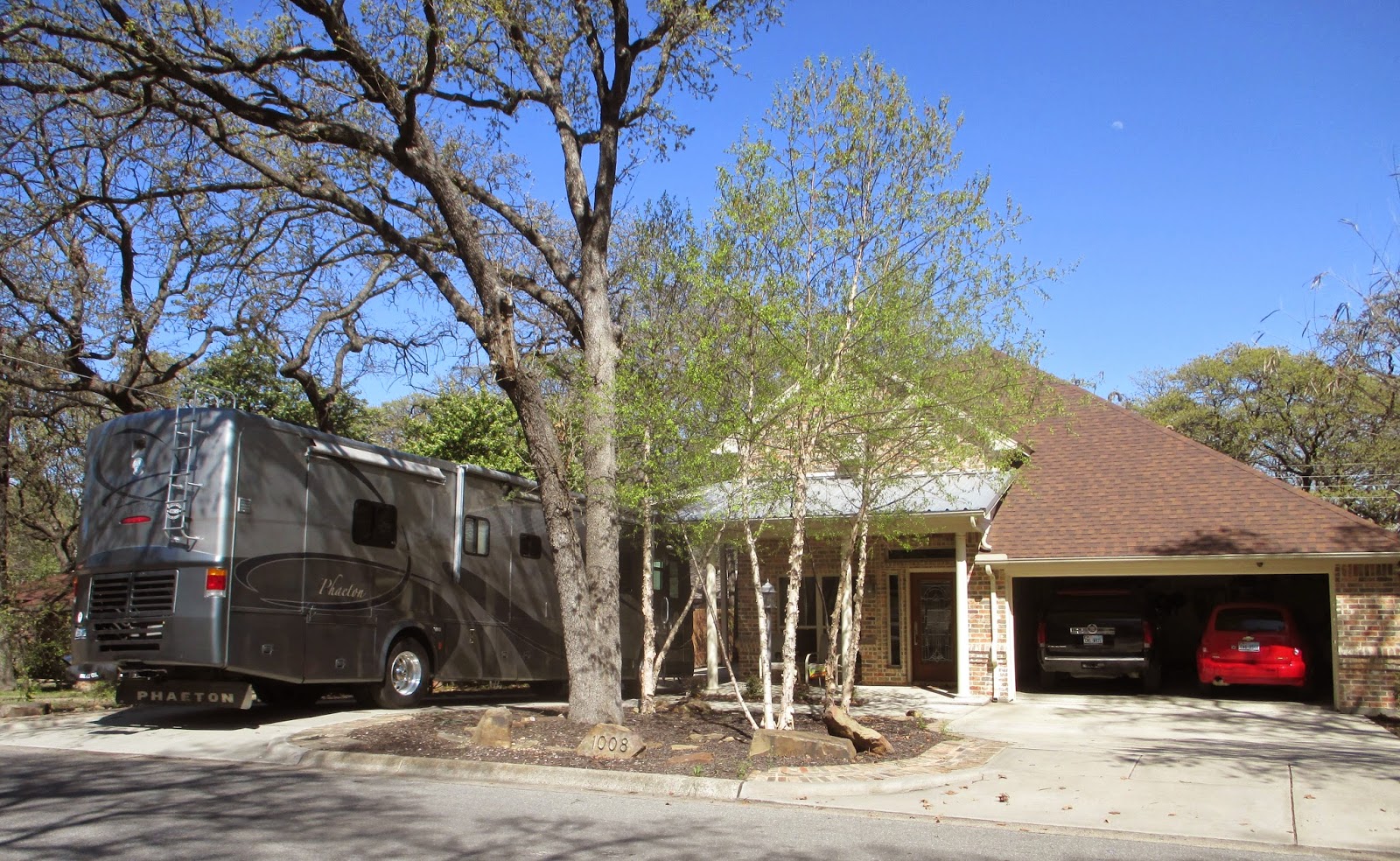 First and foremost is the offloading of Sandy's entire wardrobe, only a portion of which she probably would have worn during the trip just ended. This will not be done without her muttering about how many of her garments were unneeded or inappropriate for the trip. She had a valid point; the weather in the Rio Grande Valley was a good deal different from what we had previously experienced there. It was cool and rainy much of the time, so she hadn't needed much of the warm weather clothing she had taken.

Since she insisted on taking her entire wardrobe inside, I asked why she didn't leave on board the garments she knew she would use on the next trip, as a lazy person like me would do. Her response was no different from all the other times I've asked this question: Looking over her glasses, she said something like, "You're a guy; for you, clothing choices are simple: shorts or pants, short sleeves or long sleeves. For women, the possibilities are endless; I will just have to rethink everything before the next departure."

That's about as deep as I wanted to go into that conversation, as I don't really know much about women's wear, much less what kind of shoes and accessories are to be worn when and where and with what outfit. I do know, however, that it's a pretty big deal, so if my input is needed (which is almost never), I'm sure she'll ask.

To be fair, Sandy has made a lot of progress in adjusting to RV travel over the years. For example, this photo shows the relatively modest wardrobe she has chosen for our next trip, which will be a relatively short one. You would have to have been around at the beginning to fully appreciate her fashion evolution. 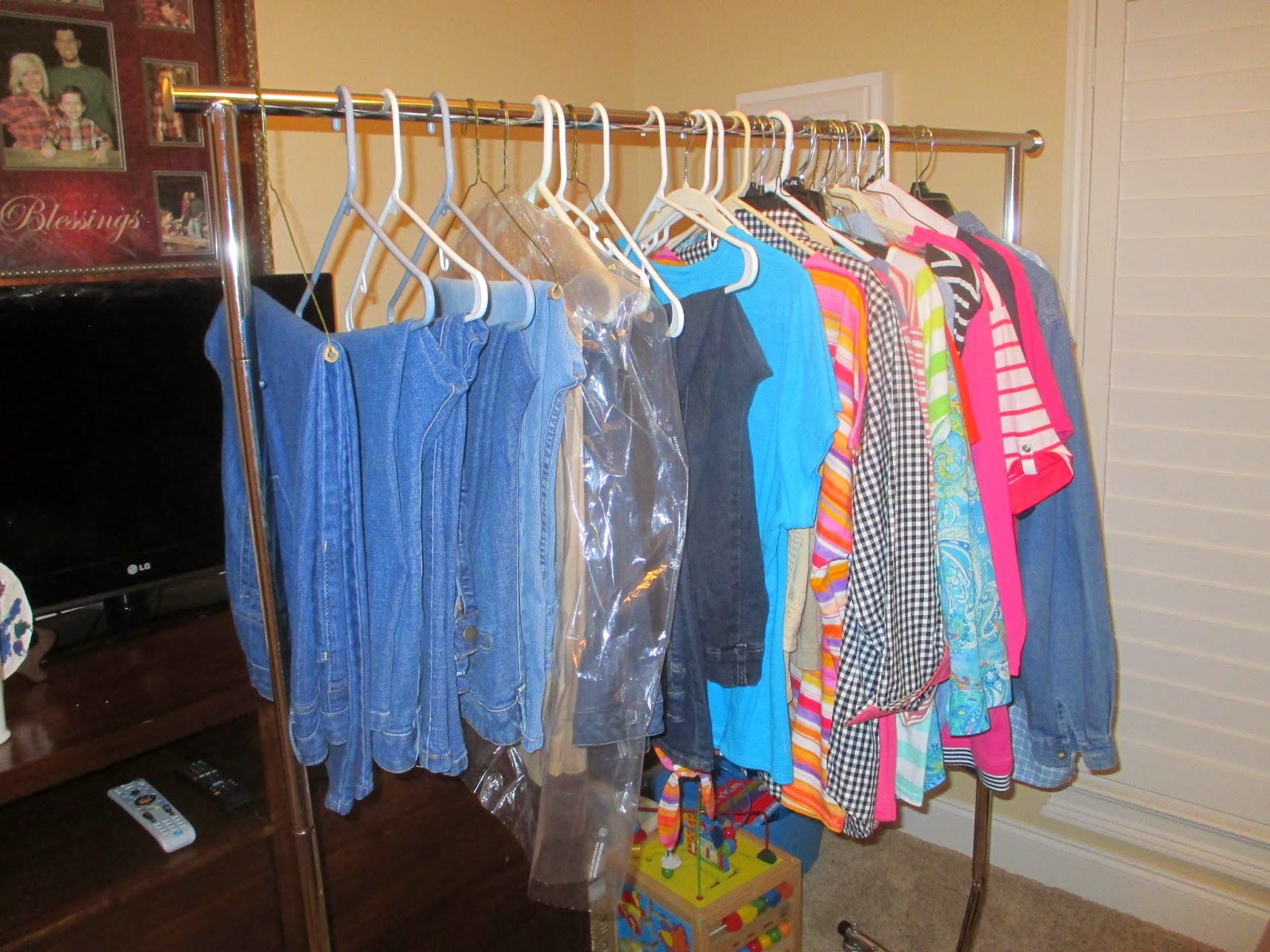 The logistics of transferring stuff from Phannie into the house and vice versa is relatively simple and unrushed, thanks to our good fortune in having an architect design the house with an RV port and a door that leads directly from the port into the laundry room/pantry, where there is an extra refrigerator to hold any perishable food that needs to come inside. 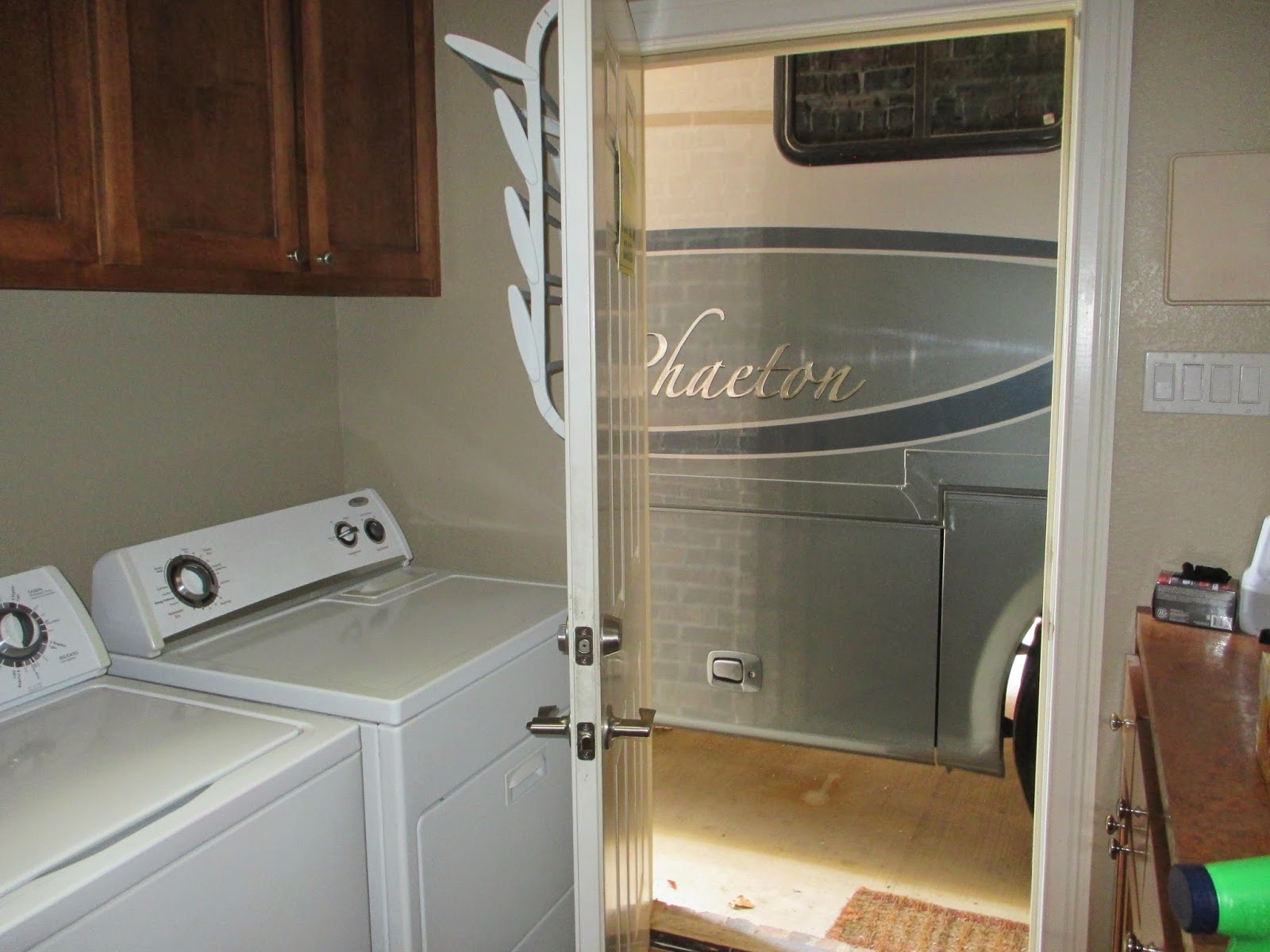 Once the items to be laundered are brought inside, the washer and dryer get a workout. (Not by me; when I was a bachelor, Sandy observed once how I performed laundry chores and was so appalled that she banned me from the practice for life after we were married. I sheepishly admit that I offered little resistance.) We have a Splendide washer/dryer in Phannie that works fine for small loads, but our king size sheets and other heavier items come inside to the larger machines. With the little Splendide, we can be on the road for months, only occasionally visiting the laundry room at an RV park.

Then I empty out Phannie's refrigerator, transferring the contents into the laundry room fridge. After shutting it down, I leave the coach refrigerator's doors open to allow it to defrost and air out after cleaning. 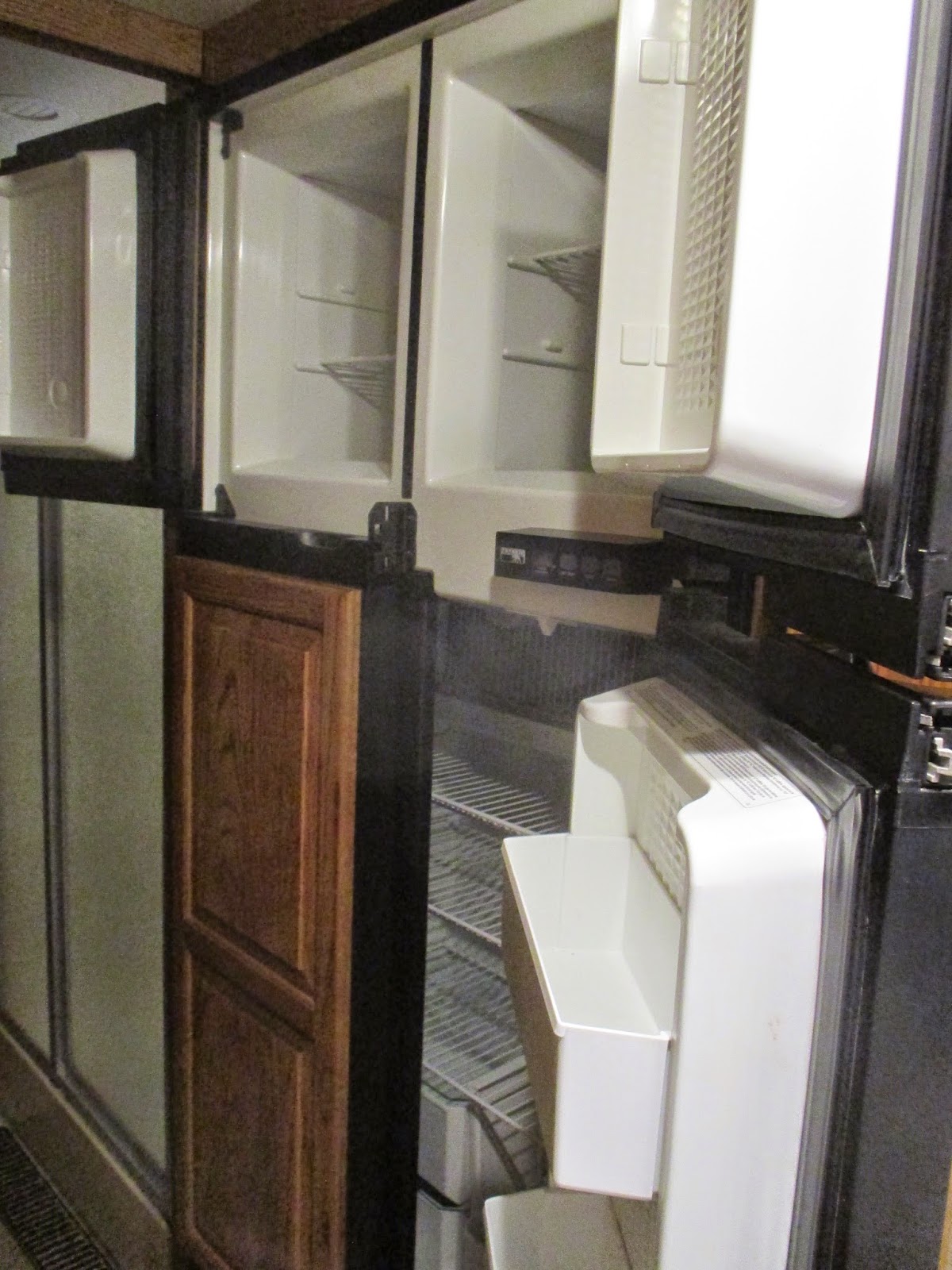 We leave Phannie's canned goods and staples in her pantry when we're home. There's no need to bring them inside, as we have duplicates in the house.

The only things left are to hook up to shore power, dump the tanks and drain the fresh water, which will be refilled just before the next departure.

There are always other things to be taken care of when we are docked at home. There's usually a visit to the doctor or dentist and refills of prescriptions, get-togethers with friends and, this time, a visit to our accountant to deliver our tax documents. That was scary; I'm pretty sure we're going to get soaked this year.

I also needed our ace electronics guy, Russ, to come out and tweak the security cameras around the house and to make a final adjustment on the new XM/Sirius radio in Phannie. This guy is a jewel, for sure. 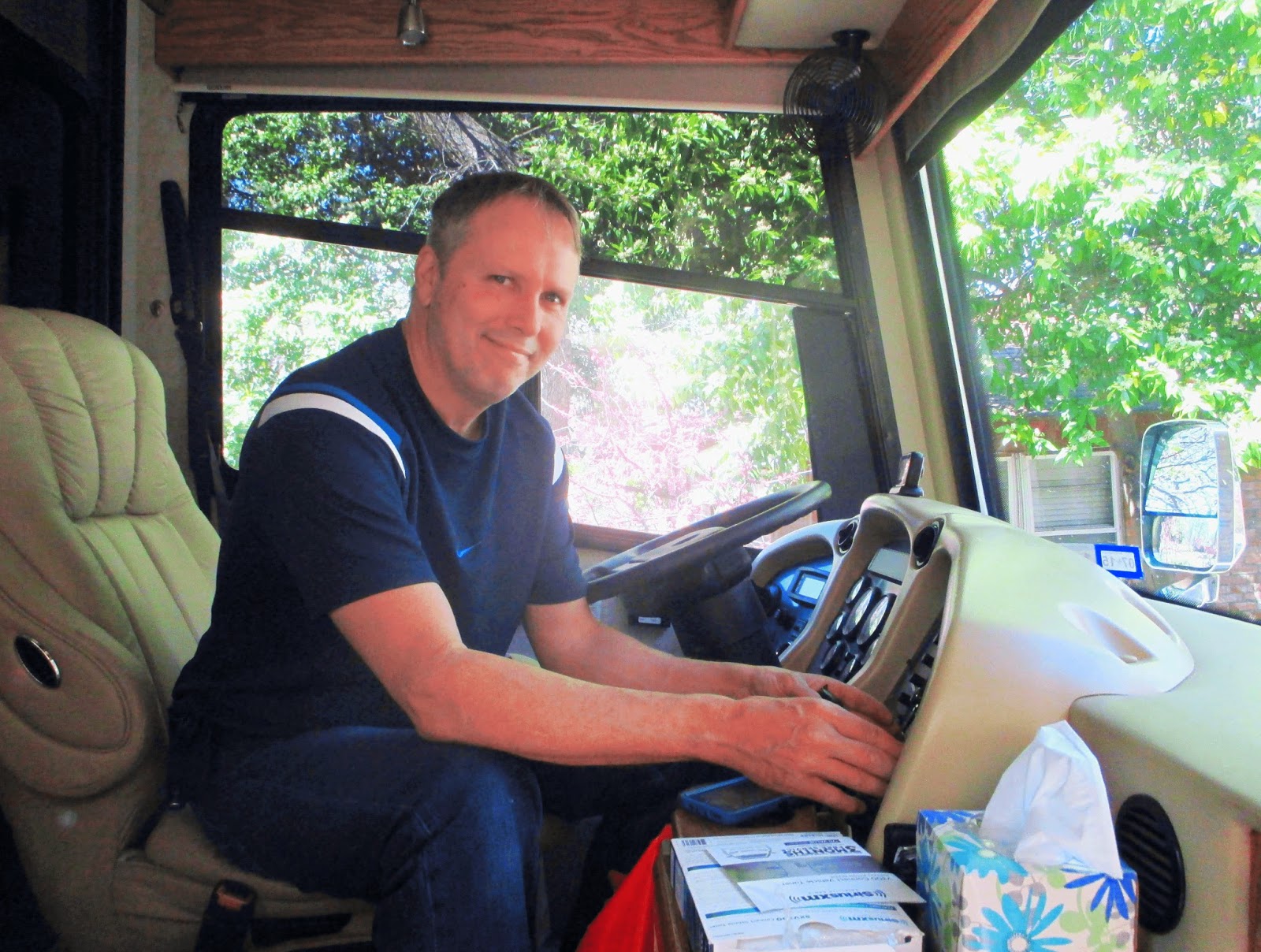 It occurred to me that I had not serviced the coach batteries in a couple of months, so I quickly took care of that little chore using my Pro-Fil battery watering system. If you are cheap like me and don't have AGM batteries (there is a school of thought that says AGM batteries are probably overkill if you're not boondocking, which we never do), this is the best and easiest way to keep your batteries healthy. For me, it's one of those "must have" items. It takes only about a minute, and there's no fuss, no muss, and you can't overfill the batteries. 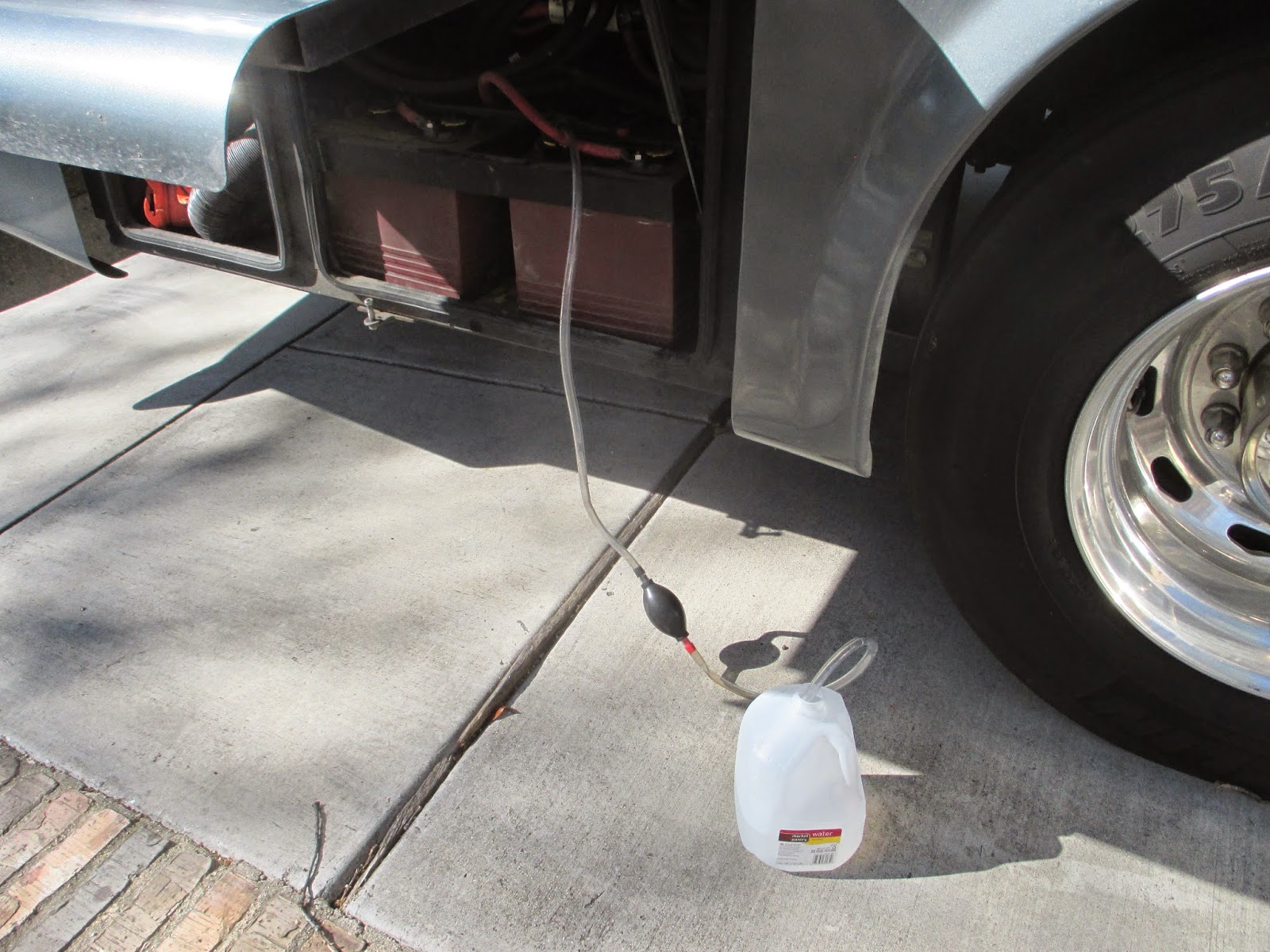 Then it became clear there would be a need for me to "mow" the yard. Yes, even though everything is xeriscaped, an occasional weed will poke its head up from underneath the mulch, requiring me to bring forth my trusty weedkiller spray bottle and dispatch the offender to an ignominious end. Yes, I could have pulled it up, but 1) I prefer to watch the weeds suffer before they perish, and 2) pulling up weeds would be too much like w**k. Spraying this weed was about as much yard w**k as I could tolerate and afterward, I had to go sit on the porch and rest a while in order to fully recover. I figure if you're going to be a part timer, your stick and brick should be as maintenance-free as possible. I think we've done a pretty good job with that. 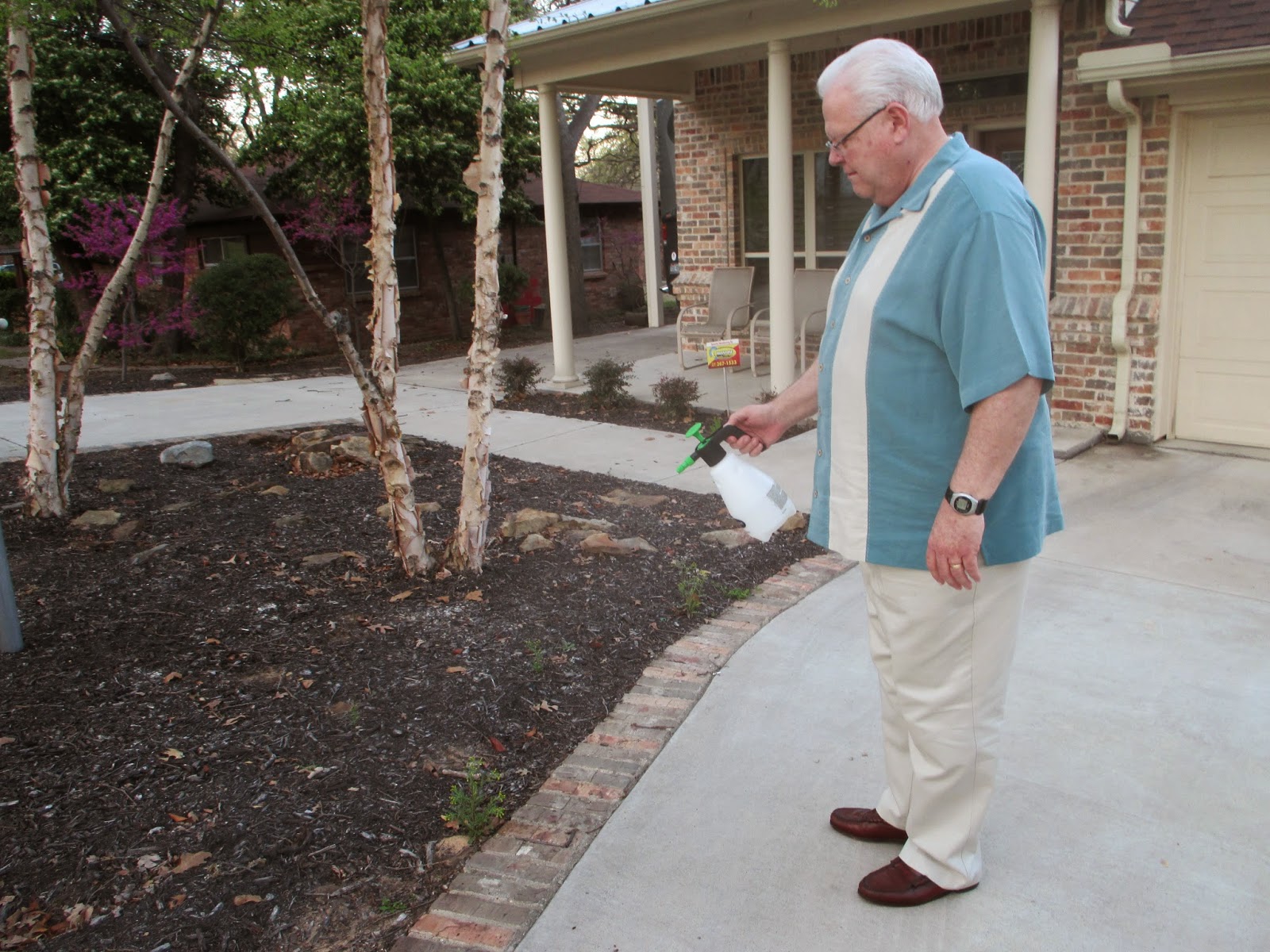 The early April weather was so nice one day that I decided, curiously, to give Phannie a bath! Now those who know me well may have their heads spinning around about now, as they know how seriously I am taking retirement, which I define as the absence of work--of any kind. I really don't have a good explanation for my sudden departure from indolence, but it happened. And while it was good exercise, I had an unpleasant feeling that I may have developed some areas of moisture on my glorious body that could be attributed to--dare I say it?--perspiration! 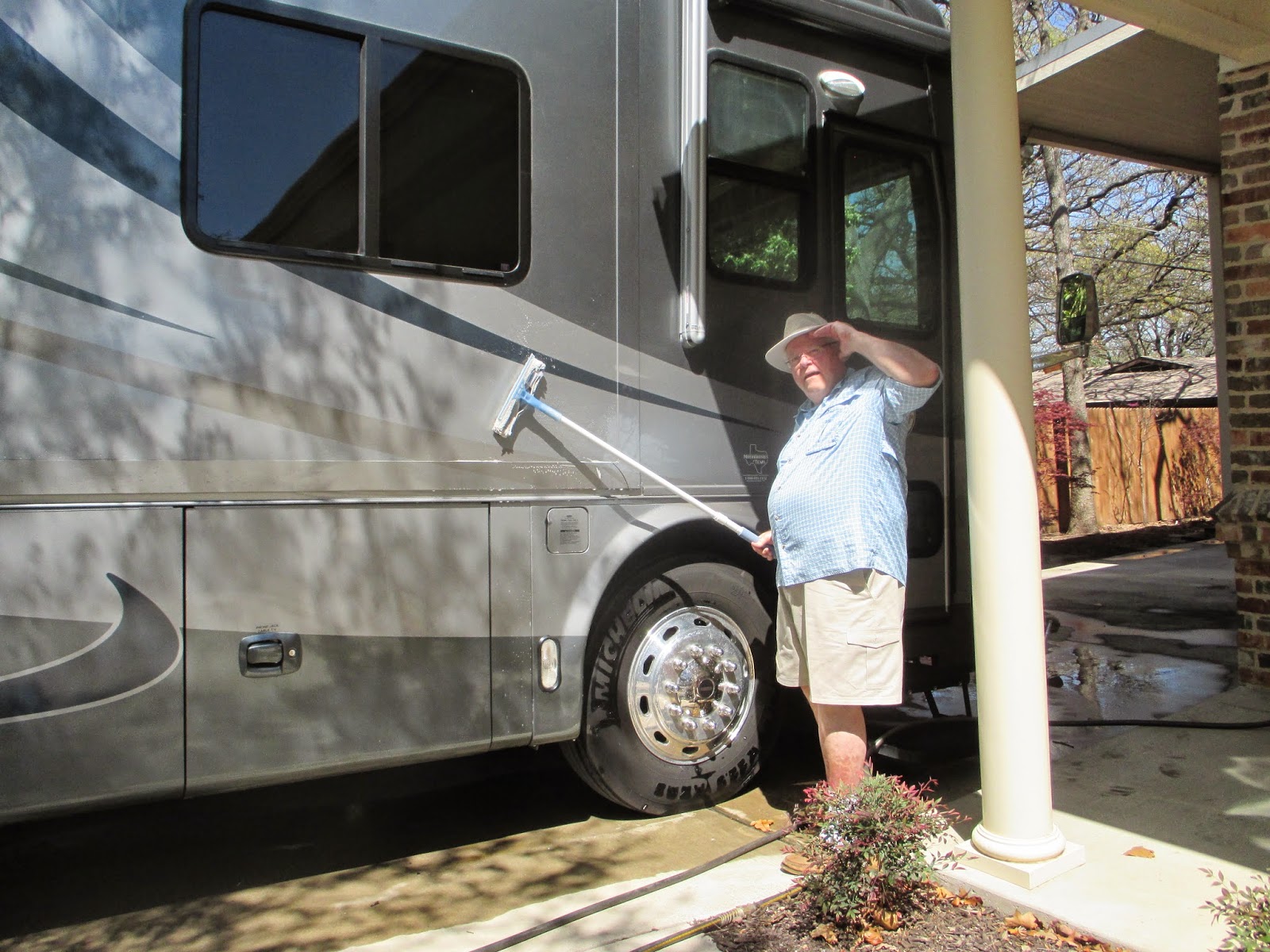 While I'm on the subject of RV washing, let me tout one of the handiest gadgets in my possession--a squeegee with a very flexible blade--perfect for big curved windshields. If you own a motorhome and you don't have one of these, I feel sorry for you: 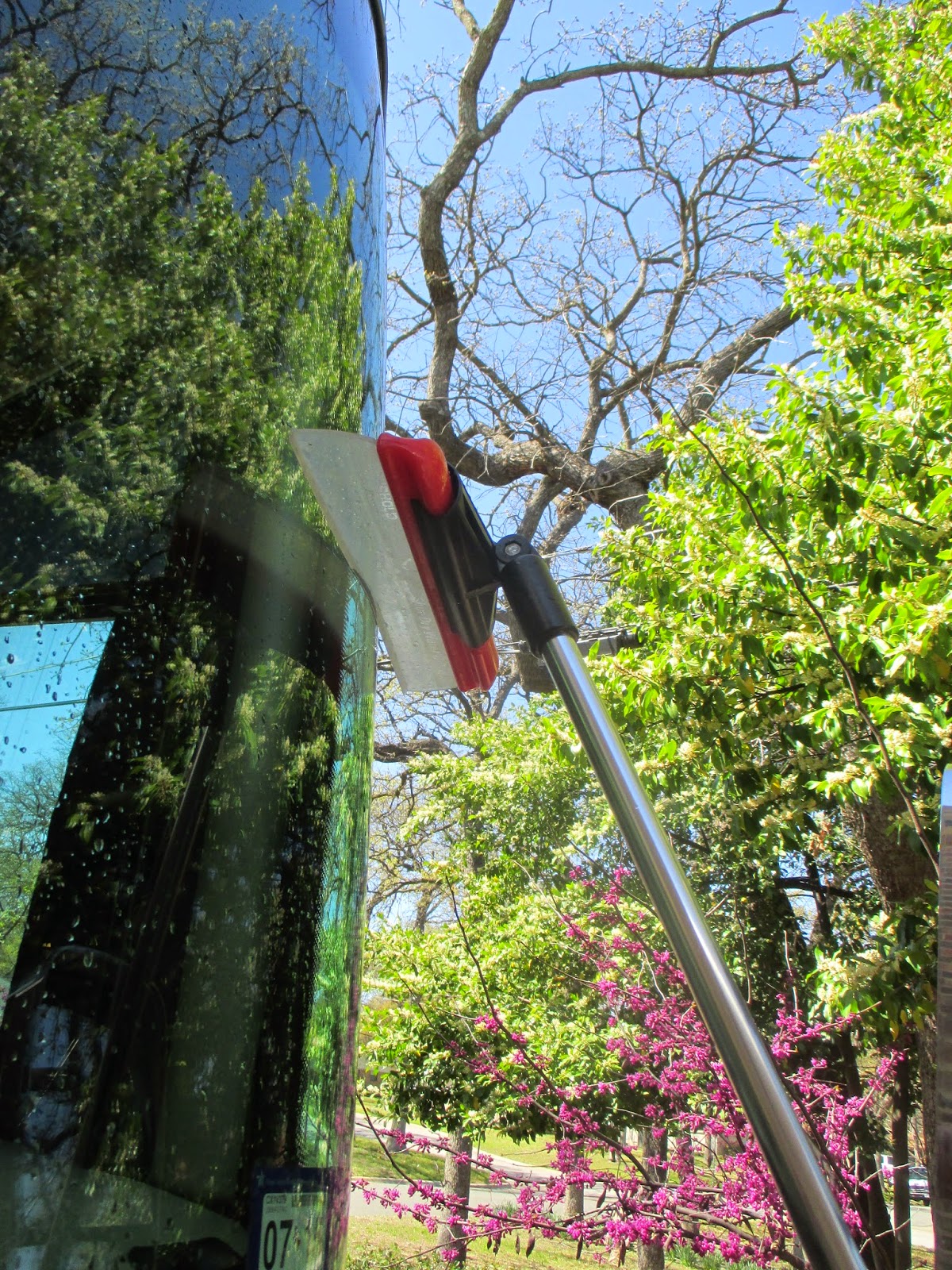 If you ever wanted to get a perfect gift for a motorhome owner, this is it. It's made by Surehold Industries and can be ordered here. (Be sure to order the long extension handle, too.)

Well, that's about it for now. We will be headed for a rally in Conroe at the end of the week, so look for a post from there.

Thank you, Lord, for the wonderful life You've given me.
Please forgive me if I do not appreciate it enough each day.