Our two-week visit with the kids and grandkids is drawing to a close. We've had a great time spoiling Mason and Pryce, something for which we think we have a special gift, and so do their parents, except Mindy and Tyler don't always think of it as a gift. We see no need to apologize for this; we've worked hard to reach a point where we can do just about anything we wish, whenever we wish, and there are worse things than ensuring that our grandsons love us more than their parents! (I'm kidding, but only slightly.)


Since we went fulltime, we had been roaming for a couple of months, during which we hadn't seen the boys, but Sandy kept herself busy during that time acting as a purchasing agent for them--almost entirely for acquiring clothes, books, movies, educational material and, of course, toys. We were pulling the Escalade during this time, and Sandy gradually acquired so much stuff for the boys that I had to fold the middle and rear seats flat in order to make more room. When we finally unloaded in the dark of night at Mindy's and Tyler's house, it seemed much like Christmas as Tyler struggled to find room in the attic and storage areas. I'm thinking Sandy may not have read the previous post about finding "balance."

So that you don't get the idea that we are way too extravagant for the boys' own good, you should know that most of the things Sandy bought were seriously on sale and now are stored for gift giving occasions through next Christmas. I'm figuring she may have had her fill of shopping for the grandkids after the frenzy just completed, but history is not on my side here.

At my friend Ed's request, I have been doing some editing of a memoir he is writing about his long career as a pilot. It has been an interesting project and luckily, Ed doesn't seem to be in a hurry for the editing to be finished. I spent most of my flying career in management positions and, although I did a great deal of writing, I have not had an occasion to edit an entire book. I suppose I'm overly picky about the final product, so a passage I'm editing may go through several rewrites before presenting it to Ed for his review. This is pretty time consuming, and working on it in my spare time is pretty slow going. I'm determined to see it through, however, if Ed doesn't fire me!

We've enjoyed this quiet RV park here in Willis, Texas right on the shore of Lake Conroe. I'm going to include it in the 'best of the best' parks listing on the home page, even though it doesn't quite meet all the criteria. All the roads and sites are concrete--a big plus for us, as we don't like tracking mud an dirt into Phannie or Mae. The park is well kept, heavily wooded and aesthetically pleasing, especially with the lake view on two sides.


A big plus is that it has good wifi most of the time--something I can't say about most parks. Perhaps the best thing is that the price is right, especially for a monthly stay. The only downside is that a few of the RVs here are a little shabby looking and occupied by semi-permanent residents. That seems incongruous with the quality of the facility.

We'll be leaving here for Canton, Texas, where we will be attending a statewide rally for owners of Tiffin coaches next week. All the sites there at Mill Creek Ranch RV Park will be occupied by the attendees. We've never attended one of these large rallies before, so it should be interesting.  After that, it's back to the DFW area and routine doctor visits. We'll leave there in late April for the Tiffin factory in Red Bay, Alabama, where we will have some major upgrades done to Phannie. We'll keep you informed about all of this.

You know you won't get away without my telling you about some excellent restaurants here in the area. My first pick is the Fish Pond Cafe here in Willis: 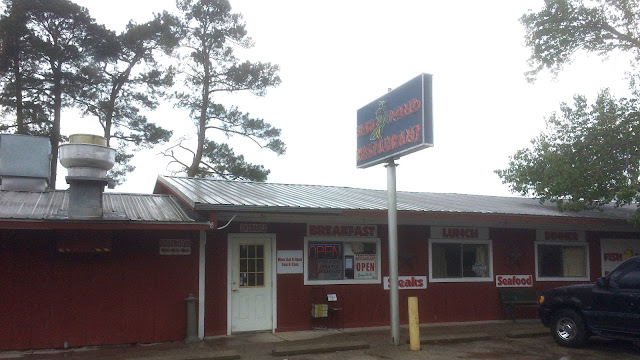 This is one of those country dives that you just know is going to have good food, and boy, did it ever! Catfish, turnip greens and green beans were on the menu this day, and it was nothing if not superb. The veggies were fresh, of course, and seasoned with ham hocks just as your grandmother would make: 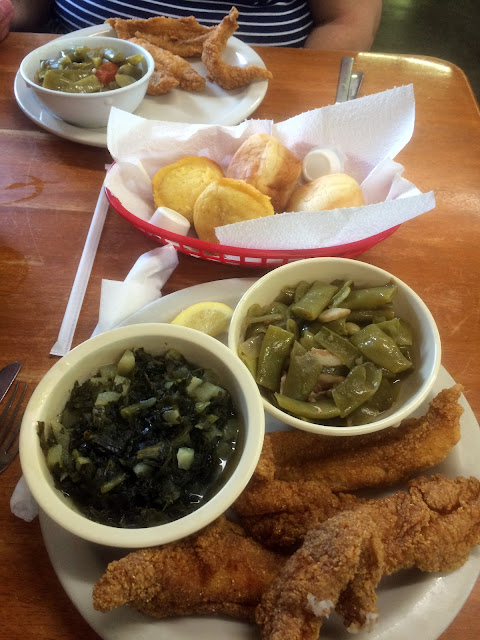 The next eatery is really unique, in north Houston on 1960 near I-45. It's called Le' Pam's House of Creole: 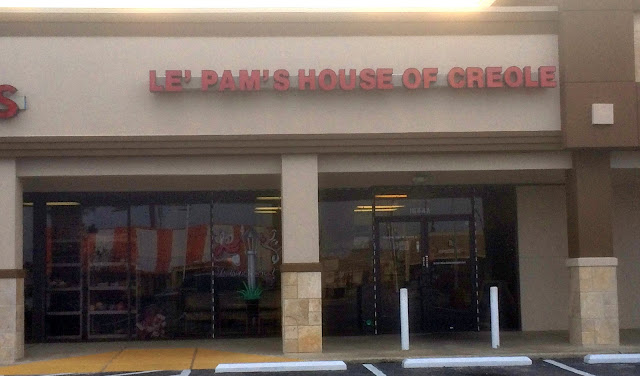 The owner, chef and cheerleader is a lively and wacky black woman named Pam who moved to Houston from New Orleans, where she obviously learned everything she needed to know about cooking cajun and creole food that may be the best in the area. Her kitchen is fully visible behind the front counter, so a customer can see everything she does, and she stays busy! When she has a break, she loves to walk around in the dining room, visiting with customers, all of whom seemed to know her when we visited.

Here's Pam, visiting our table and bragging to us in a loud and animated voice about how good the food is that she cooked for us: 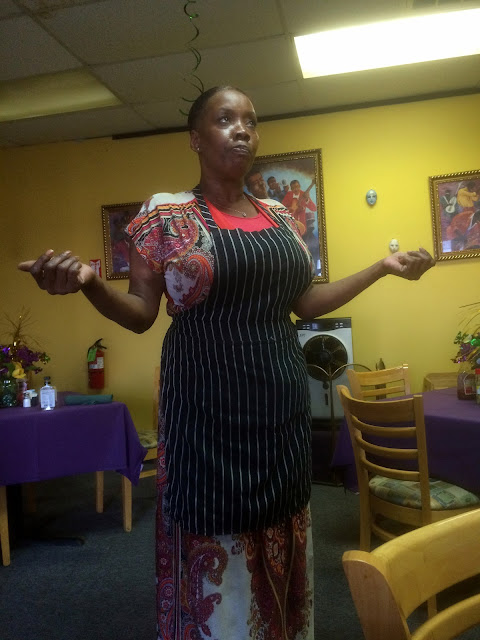 I guess if you're telling the truth, it isn't bragging, is it? All I know is that it was wonderful. I had asked for some lemon to squeeze on the fish, but she scowled and told me good-naturedly that I couldn't have any, as it would ruin the wonderful flavor of the spices. In all the restaurants I have visited, I think this was the first time I have been scolded for asking for something! However, I didn't argue with her, and it turned out to be okay; the fish was great, and the flavor might indeed have been diminished with the lemon juice.

Take a look at this seafood gumbo and be jealous. It was packed with fresh seafood, including crab, and it was probably the best I've ever tasted. Ditto on the jambalaya and the fish/shrimp plate in the background: 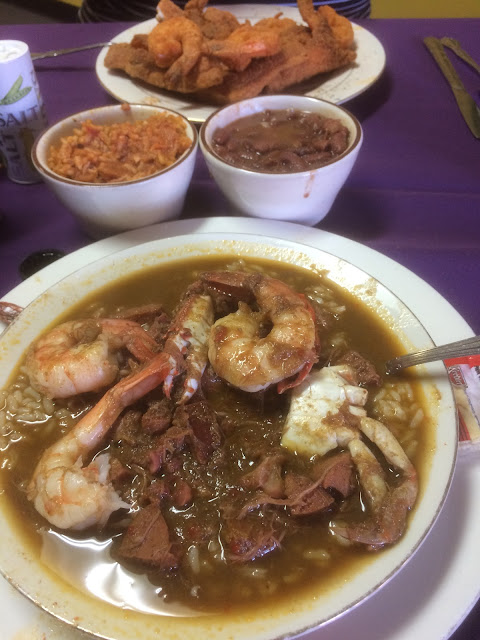 I couldn't eat all the gumbo, so Pam brought me a large Styrofoam takeout container, into which she poured the remainder. Then she noticed that the container wasn't full, so she took it back to the kitchen and filled it up with gumbo again at no charge. Amazing. Are you hungry now? You should be.

For those interested in how we're doing with the fulltiming thing, we're still pinching ourselves. Freedom is a wonderful thing: If we wanted to, we could just throw a dart at a map and say, "Let's go there!" Then we raise the jacks, pull in the slides, and we're off. Life doesn't get much better than that.

Thank you, Lord, for this wonderful life; please forgive me if I don't appreciate it enough each day.
Posted by Mike Mills at 1:15:00 AM