Friends, Food and Cool Nav Apps for your iPad. (Don't Miss This One!)

We wound up our visit to San Antonio much too soon, vowing that we would be back to see more. This could easily be a home base for us but, unlike the Rio Grande Valley, most of the RV parks are not particularly attractive for snowbirds. However, Travelers World is a nice park, friendly, close to everything and well maintained. For example, here is a photo of a groundskeeper tidying the gravel with a rake affixed to a golf cart. This is done after every guest's departure and afterward, the attendant sweeps up any gravel pebbles that may have crept onto the paved access road. Frankly, I don't think I've seen this done before, and I was pretty impressed. Normally, we prefer hard surfaced parking areas, but these gravel ones were very well done. 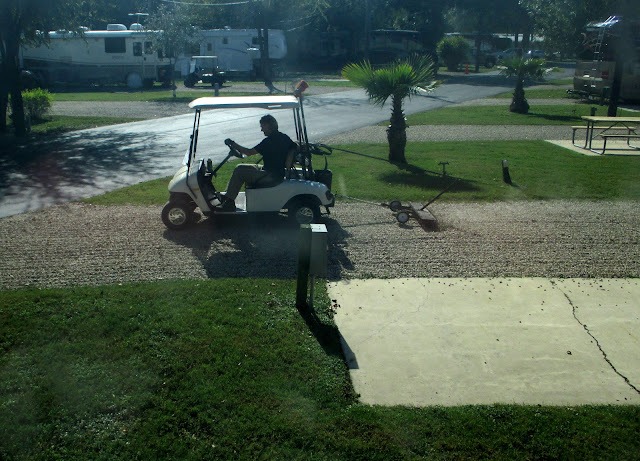 We were lucky to have longtime friends Bubba and LouAnn join us for a couple of nights. They drove down from Fort Worth in their Thor Tuscany motorhome, and we had a good time with lots of laughs. 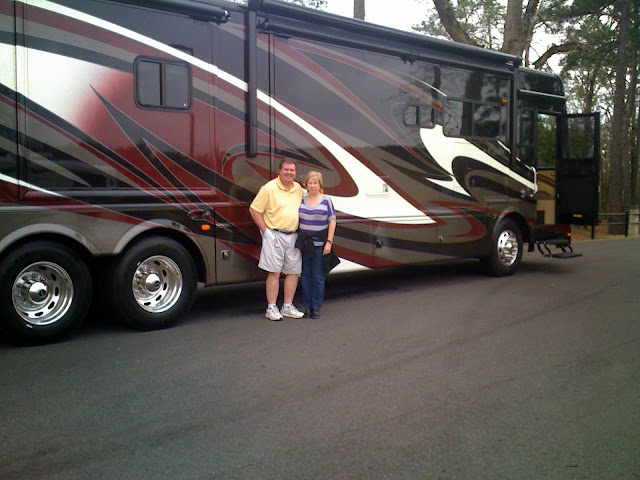 Since the weather here was so perfect during our stay, we cooked outdoors on the Weber Q several times, adding to my experience with that versatile cooking machine. I had been inspired by blogger friend George, who seems to cook just about anything imaginable on his Weber Q. He was a former chef and includes a bunch of information, including recipes, on his blog, which you can see here. We saw a photo of George cooking something in a cast iron pan setting atop the grill grates, so we tried cooking a pot of chili like that a while back, and it turned out great. We also really liked grilled chicken marinated in Italian dressing. (Sorry, no photos of these; we forgot to take them.) We also got a grill mat like George's for those things that shouldn't have direct heat, like fish. That works really well, as does the shallow pan below that we picked up at Wal-Mart for about eight bucks. Here are a couple of photos, one where we were cooking German fried potatoes and another in which we added some cabbage, of which we're quite fond. These turned out great: 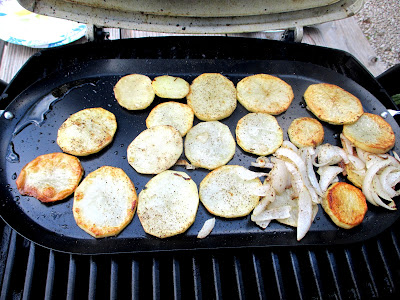 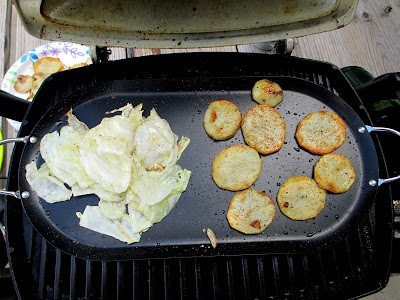 The reason we used the pan instead of the grill mat was to contain the oil, or in this case, bacon grease required for frying. (Okay, all you health fiends out there: You don't need to write me letters; It's not my fault; my parents and grandparents came from a rural background, and bacon grease was the mainstay of their cooking, which was without parallel in adding flavor. Besides, they all lived into their eighties and nineties, so give me a break.)

We also love grilled corn, as well as the zucchini and squash pictured below: 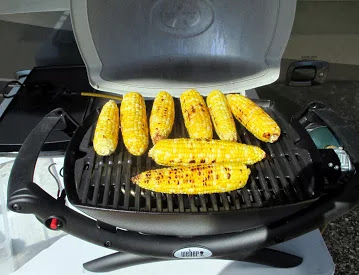 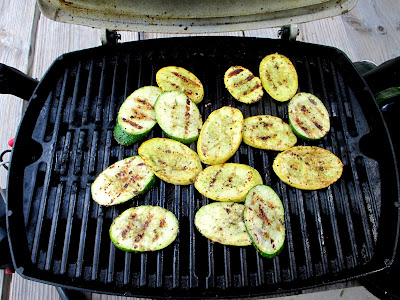 Oh, and did I mention that shishkebab, which we did some time ago, was also wonderful? 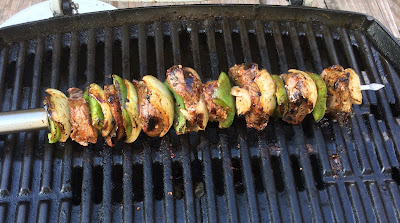 Well, I guess I've let the Weber grill information get a little out of hand, haven't I? Let me pivot to our last day in San Antonio, where we added yet another restaurant to our favorites list--Henry's Puffy Tacos: 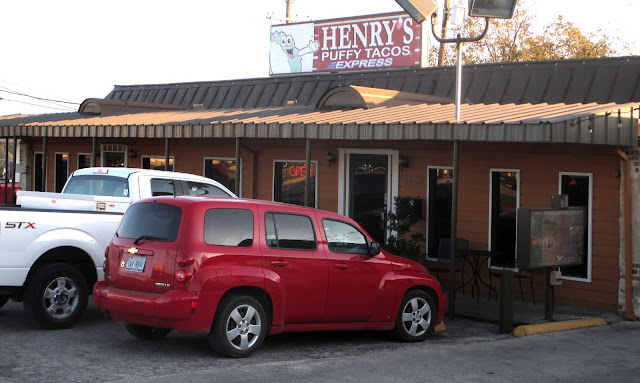 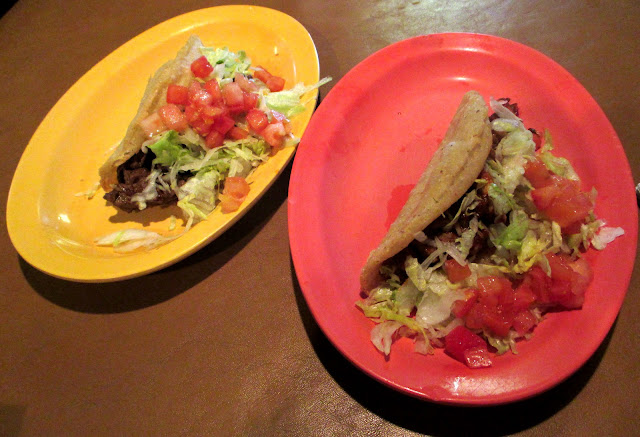 I'm not sure how they fry the tortillas to make them puffy, but we liked them a lot. And the stuff they put in them--in this case, beef and chicken fajita strips--were wonderfully tender and flavorful. This is another mom and pop joint where you can get really good food for a really cheap price, and that's why it goes on our favorites list.

After bidding adieu to Bubba and LouAnn, we pointed Phannie eastward toward Conroe. I was using my newly-positioned iPad as a mapping tool, and I wanted to include here a few photos of a new app I downloaded for this purpose. Now, for some of you who have newer coaches with the latest digital cockpits, this may seem a bit bush league to you. But, if you have an older coach like Phannie, and you're a gadget freak like me, this might be right up your alley. I mounted my iPad via an apparatus that fits in a cockpit cupholder, and here's what it looks like. The part that fits in the cupholder is adjustable and holds the iPad steadier than you would think. (I have another cupholder near my left armrest, so I'm not deprived of my drink.) 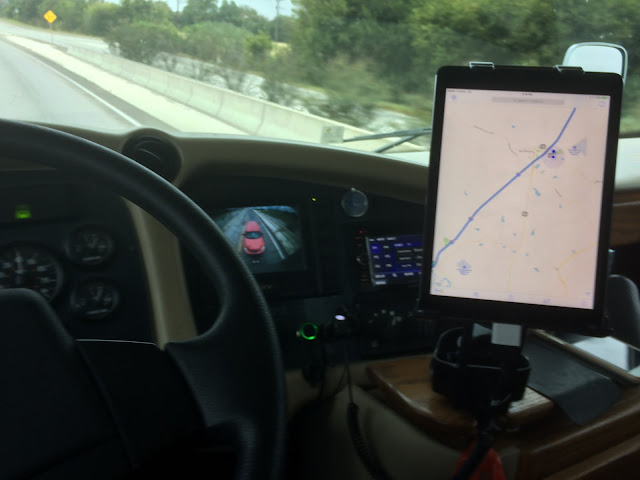 This is a view of the mapping I displayed during our arrival in San Antonio. It reminded me a bit of the approach charts I used when I was flying: 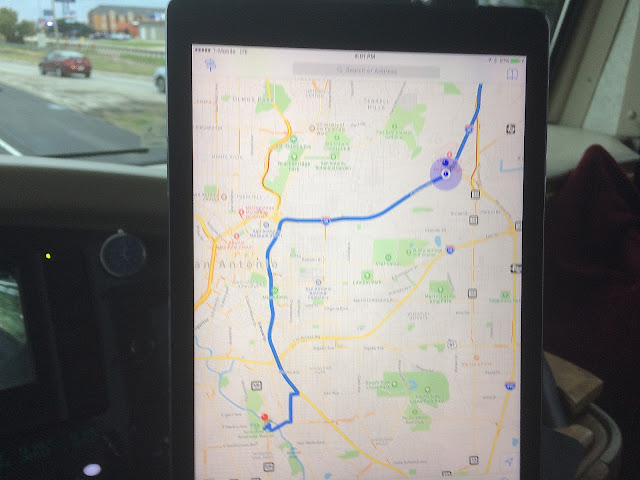 Keep in mind that this map can be expanded or shrunk with your fingertip gestures on the screen. You can go to a wider view to show your entire route if you wish. With that in mind, guess what I don't need any longer?  A paper map! If this weren't enough, it will also display weather, temperature, wind and elevation along your route. You can also use it as a GPS, but I prefer to leave the Garmin going and keep the map view on the iPad screen.

This is the handiest thing I've seen in a long time, and I'm beginning to wonder how I lived without it! The app is called Inroute, and it's free, unless you want to get the added features like weather, wind, etc.

Here is another view where I briefly left the Inroute app page to check some emailed arrival instructions from our rally coordinator: 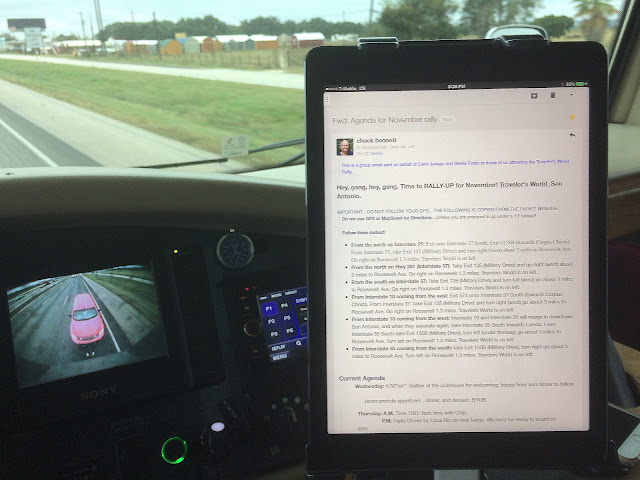 Here is another navigation app I have that many of you use, called Allstays: 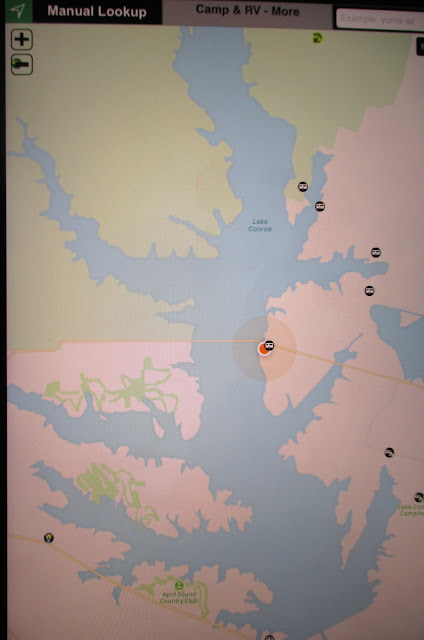 I like this one because it shows RV parks, campgrounds, Wal-Marts, rest stops, some truck stops and a bunch of other things that are selectable, and it's free. This screen shows our current RV park on Lake Conroe via the orange dot.  The view can also be adjusted to show as large or small an area as you wish.

And here is another app I like even better, called Trucker Path, where I can see all of the above and more, including a much greater number of truck stops and and truck service facilities--very important to big rig owners. And, it will also show you low overhead clearances. Not bad, huh? This one is also free. 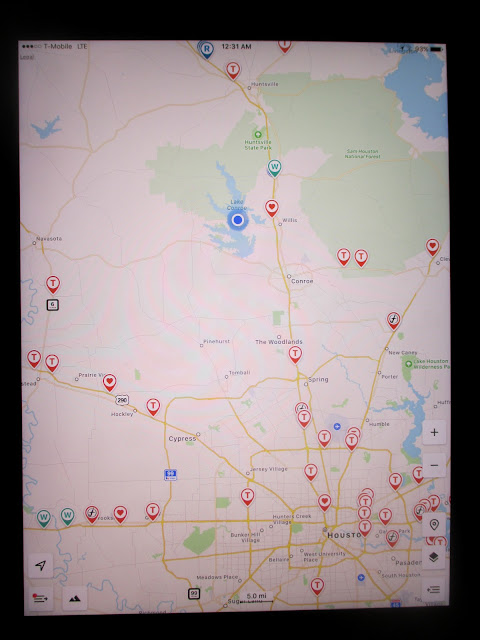 Having all this information at my fingertips is amazing, but I'm very careful not to use it to the extent I get distracted from driving. Since it is not far from eye level, it only requires a glance every now and then, much like the GPS.

Now, you may be wondering what the constant use of this while enroute will do to your data plan. Well, it would probably be devastating unless you have unlimited data, which I do, via T-Mobile. Yes, I said T-Mobile. They do have such a plan now, and I have been astonished at the coverage it has, even in rural areas; I had thought it was pretty sparse until I tried their plan. They seem to have come a long way in their coverage reach but, even so, I still keep all my other devices, including a hotspot, with A T and T. I'm sure T-Mobile won't be able to match their coverage for a long time. If needed, I can fire up the hotspot and run the apps if I wish.

Well, that's a lot of information to absorb in one post, isn't it? That may have to suffice for a while, as we will be in this area for a couple of months during the holidays, and we will not be posting as often. But stay tuned anyway; who knows when something will pop into my feverish mind.

Happy Thanksgiving to you all!

Thank you, Lord, for this wonderful life; please forgive me if I don't appreciate it enough each day.
Posted by Mike Mills at 2:23:00 AM