Proud Parents of a new R. N. and Other (Far Less Important) Things

Many of you saw this on Facebook, but you'll just have to bear with us again, as it isn't every day that parents can gush over an offspring's accomplishment like this one. Our Mindy just graduated first in her nursing school class, all the while raising two boys under seven years of age and home schooling them, too boot. She said it was the hardest thing she ever did, and the amount of sleep she lost to be at the top of her class must have been epic. She had the unwavering support of our son-in-law, Tyler, and we helped when we could, along with others, but it was mostly her sheer determination to excel that resulted in her finish at the top. She has informed us that she will be pursuing her B.S.N. right away. From the perspective of fulltime RVers, it was nice that we were able to swoop in from time to time and provide some help and yet not be underfoot. We are, as you can imagine, incredibly proud of her. 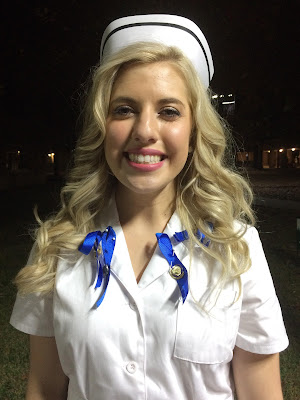 Now, on to really trivial matters:

Blasting through our location near Houston was the same strong Arctic cold that froze the rest of the nation. Fortunately, we didn't suffer a hard freeze this far south. But since we won't be leaving for the Rio Grande Valley until after the holidays, we were going to have to endure temps in the low thirties, so how did we prepare for it? Why, I did what any good Texan would do--cook a pot of chili! 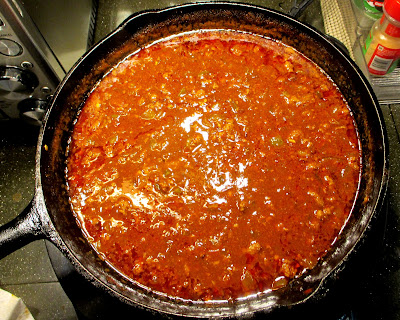 I don't know about you, but I like spicy chili, and I also see this as an opportunity to toss in some surplus ingredients that may need to be used from the fridge or pantry; I don't really use a recipe. In this case, I browned about a pound and a half of chili meat, tossed in a lot of chopped onion and garlic, some chopped fresh jalapeno and serrano peppers, a sprinkle of red pepper flakes, black pepper, cajun seasoning, a good bit of chili powder and cumin, some leftover homemade salsa, a can of beef broth, a can of green chiles, and a couple of aging cans of storebought chili. Then I simmered the whole thing for about 45 minutes. Yes indeed, it was spicy; but boy, was it good! Did I use beans, you ask? Well, no self-respecting Texan would put beans in chili. That was something brought here by carpetbaggers after the civil war, and I think we hanged most of those folks.

Now, before you call the chili police about the horror of my using canned chili, you shouldn't mock something you haven't tried. Canned chili, which is something Texans should really only use as targets on a shooting range, provides not only some extra flavor, but it also provides the emulsification that would normally be required for good chili by adding masa flour to the chili, as the purists would do. The neat thing is, no one will ever know of your sacrilege; it will just taste like really good homemade chili. I only revealed this secret because when someone gets old, like me, he really doesn't give a rip what people think. And when the chili police come after me, I won't go quietly.

Here's something I found amusing. I was checking out at Wal-Mart the other day, and I saw this taken out of the basket of the customer in front of me: 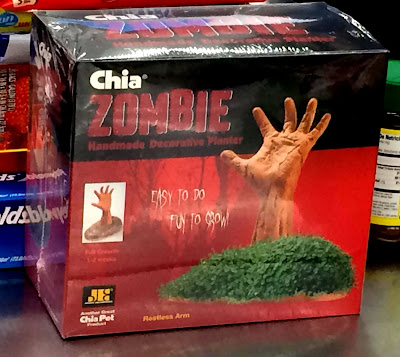 Really?, I thought to myself. I can only assume this was a gag gift, but it may not have been. The chia pet and its variations have been around for a long time, so I suppose there's a market for these things. I just have trouble understanding how watching little chia plants grow on a pig--or a zombie's hand--is compelling enough to pay money for it. But then, I haven't understood some of our culture for a long time. Apparently though, Wal-Mart knows something I don't know, and that's why the Waltons are zillionaires.

Having devolved this narrative from Mindy's exciting news to a discussion about a chia zombie (sometimes I worry about myself), I'll leave you with this equally useless tidbit regarding the origin of common sayings:

During WWII, U.S. airplanes were armed with belts  of ammo, which they would shoot during dogfights and on strafing runs.  These were 27 feet long and contained hundreds of cartridges that fed their machine guns. The belts were carefully folded into wing compartments that were adjacent to the guns. Often, pilots would return from their missions having expended all of their bullets on various targets. They  would say that they gave the enemy "the whole nine yards," meaning they used up all of their ammunition.


Thank you, Lord, for this wonderful life; please forgive me if I don't appreciate it enough each day.
Posted by Mike Mills at 5:06:00 PM