Heading Back for the Holidays: We Take a Look at Port A

We reluctantly said goodbye to the Rio Grande Valley and good friends Ed and Marilyn, Bob and Janet, Mike and Marian and Denny and Jackie and began our two-day journey back to Conroe. As we readied Phannie for departure, we got word from Marilyn that Ed was having to go to a chiropractor right then due to severe back pain; sure hope you get better soon, Ed.

On the evening before, we had all decided to go out for dinner together at a place of my choosing. Ed couldn't make it due to his back problem, so I carried on his tradition of taking people to restaurants that are closed. I hope it made him feel better! Bob suggested the Costa Messa (yes, that's the way they spelled it) Restaurant nearby, and it was fine. Fortunately, it wasn't very crowded, so we could sit, talk and cut up as much as we liked.

On our way back to Conroe, we decided to spend the night near the Rockport/Port Aransas area, a place where we have spent a good deal of time over several winters. We wanted to see how things are going with the cleanup after hurricane Harvey. We selected the Ransom Road RV Park in Aransas Pass--a nice enough park with all paved streets and sites. Surprisingly, although there was storm damage all around the city, no storm damage was evident at the park, and it was very full of RVs. Unfortunately, this accentuated the fact that the sites are very, very close together, so it would not be a park where we would want to spend any length of time in the future.  Because of the crowding, it also doesn't qualify for my "Best of the Best RV Parks" list either.

We drove toward Port Aransas and took the ferry into the downtown landing. It was a pleasant, if short, ride in really pretty weather, and we couldn't see any evidence of the storm damage as we approached the landing: 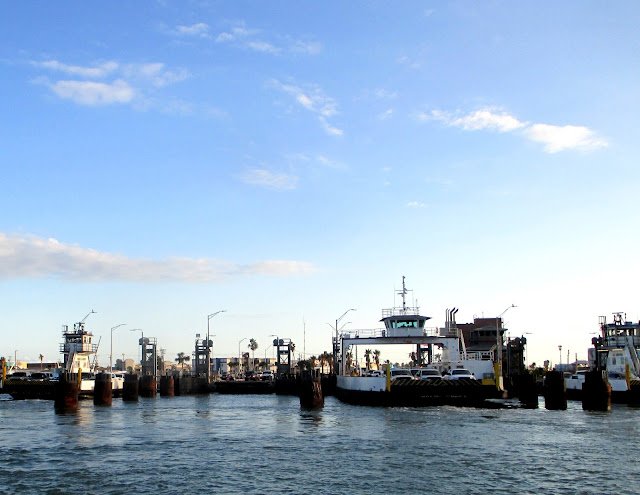 Once we drove off the ferry, however, it was a different story. Here are a few photos of some of the damage we saw:


Now for the positives:  The place is coming back FAST.  Although many structures received damage, repairmen were everywhere and the cleanup is going nicely. Just south of town is a huge pile of debris collected from all over town that is slowly being hauled away.  I would estimate that about a third of the businesses have reopened, including our favorite restaurant, Irie's Island Food. Surprisingly, all the RV parks have reopened and appear to have lots of customers. I'm guessing many of these RVs belong to the workers who are helping rebuild the town. I saw the following sign that perfectly illustrated the attitude of Port Aransans: 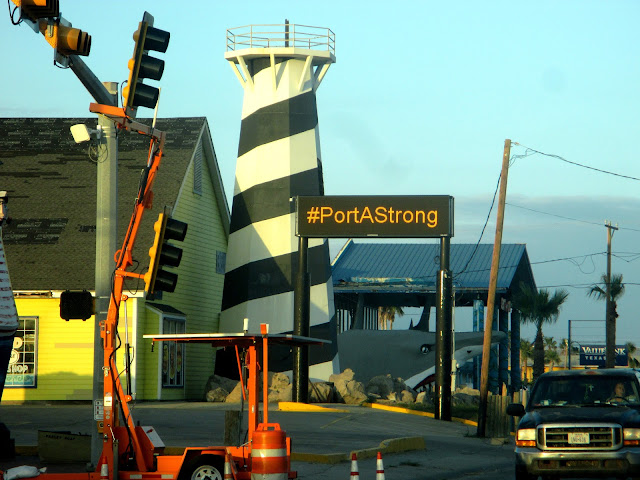 As you can see, the sign says, "Port A Strong," that certainly seems to underscore the prevalent attitude among the hardy residents. (Note that temporary traffic signals are in place, as the original ones were heavily damaged in
the storm.)

We had a fine seafood dinner at Shempy's, a favorite hole-in-the-wall seafood joint a few miles south of Rockport. We will be driving through that town as we head north tomorrow.

I had rather see the world and own little than to own the world and see little of it.
--Alexander Sattler
Posted by Mike Mills at 10:54:00 PM