Something's Flapping in the Wind Again; More RV Stuff I Like and a Cute Story

Well, it is obviously going to the year for awnings and toppers. We were cruising happily down I-44, barely across the Missouri/Oklahoma state line when, suddenly, Phannie's door awning popped fully open in the slipstream, making, of course, a loud flapping noise. I slowed down immediately and took an exit that was close ahead, stopping soon thereafter to see what had happened. At first, I thought Sandy might have bumped the awning extend switch but, being clearly out of her reach (and snoozing to boot), that proved not to be the case. I tried retracting the motorized awning several times, to no avail.

Across the freeway was an abandoned gas station, so I pulled in there and got out my ladder to assess the situation. The canopy was clearly not going to retract electrically, and it was held at full extension by folding arms that were heavily spring-loaded toward the extend position. I could force it, with great resistance, to retract, but the lock that is supposed to hold it in place was not working either. There was no way I could continue at any kind of speed with this thing fully extended, so I began to think how I might secure the awning closer to the side of the bus. Then it dawned on me: Bungee cords! I keep several sizes of bungee cords in the belly compartment, and I was able to use a couple of these to retract the awning closer to the side of the bus, although not quite fully. It would be enough, I thought, to get to a repair shop, so we left our parking spot and got back on the freeway. The awning was still flapping in the breeze a bit, not not nearly as much as when it was fully open.

I drove 50 mph for about an hour until I spotted a large T/A travel center and pulled into the service/tire shop in the rear of the facility. I asked if they could just remove the entire canopy and its housing from the bus. After looking at it carefully, the mechanic determined that its attachment to the coach would not permit the device's removal without compromising the structure around it. So, I asked him merely to secure the canopy housing to its base using some long tapping screws, which he did. The awning's not operable like that, of course, but it is a low-use item, and it will be fine until we go back to Red Bay in a few months to get it replaced. I suppose I could have done this myself but, at this stage of life, I try to stay off tall ladders as much as possible. I've had too many older friends who have had nasty falls doing that sort of thing, so paying a young squirt a little cash to do that doesn't bother me at all.

I meant to take a photo of the placement of the bungee cords in partially retracting the awning but, in all the excitement, I forgot. Here's a photo of my collection of bungee cords; I find a real need for these things from time to time, and I wouldn't be without them: 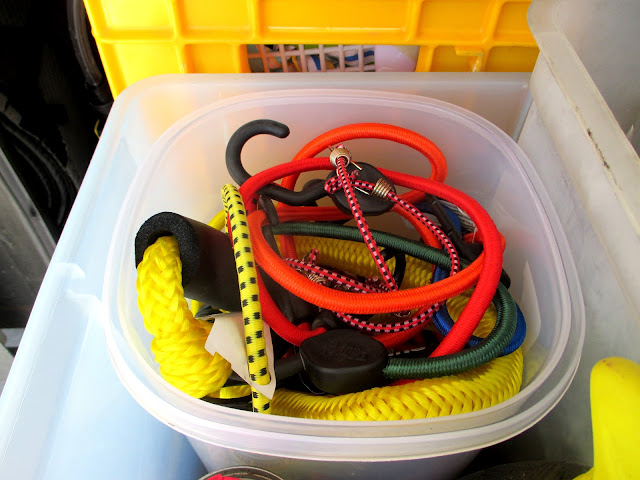 The point here is that a variety of bungee cords is something every RV owner should have. In this case, they made the difference between getting back on the road and being marooned!  Here's a photo of the door awning after securing it with the screws: 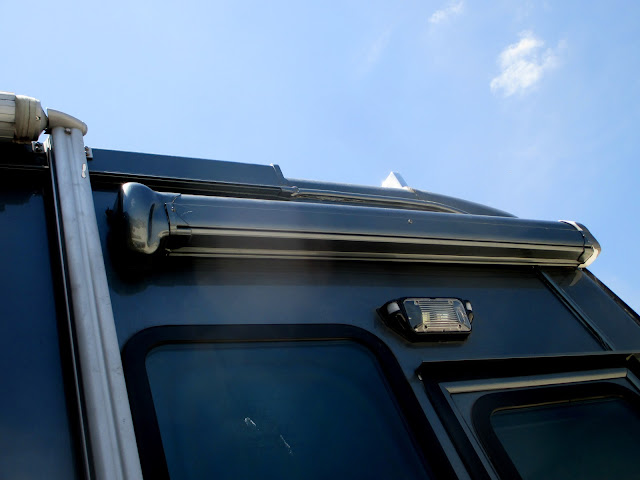 As we left the T/A shop after the mechanic finished, I thought of the wind gust that dislodged our slide topper a couple of weeks ago near Memphis. What are the chances that such a similar but unrelated event would happen so soon afterward?

I always try to mention my little discoveries of stuff that might interest other RVers.  In this case, I'm going to talk about water pressure regulators--you know, the things you attach to your hose to reduce excessive water pressure that might damage RV plumbing. While many higher-end RVs have on-board regulators (as Phannie does) as a preventive measure, I use a regulator at the hose bib to prevent a hose rupture and as additional protection for the coach, just in case. The problem is that most regulators have the pressure set too low. There are some others that have an adjustable pressure feature, but I have not had good luck with these. The ones I tried seemed poorly designed, difficult to operate or of low quality, and most did not allow pressure of 60-65 psi, which is optimum for my use. I recommend this one above all others: 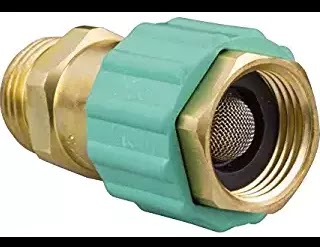 It is a JR Products 04-62425 Deluxe High Flow Water Regulator, available at Amazon, but it's a trifle pricey at over 40 bucks. It is, however, of very high quality and delivers the perfect pressure. Accept no substitute, in my view.

I've mentioned in an earlier post the iPad I have mounted in Phannie's cockpit and the favorite apps I use for trip planning, navigating and cruising the highways (as well as email, messages and everything else you can imagine): 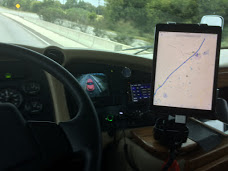 In that post, I didn't mention the app, "Trucker Path," which I like better than Gas Buddy for finding good fuel prices (and a lot more), as it focuses only on stations that can accommodate big rigs. Below are some screen shots of a Trucker Path display showing two different stations with 18-wheeler access within six miles of each other on I-35 just north of Ardmore, Oklahoma. The highway is shown on the left side of the screen; when you click on the "T" an information box opens with all sorts of data displayed. The first shot shows a price of $2.73 a gallon at an independent station and the second, a Flying J, shows a price of $3.09. The decision was easy; I saved about twenty bucks by fueling at the first stop: 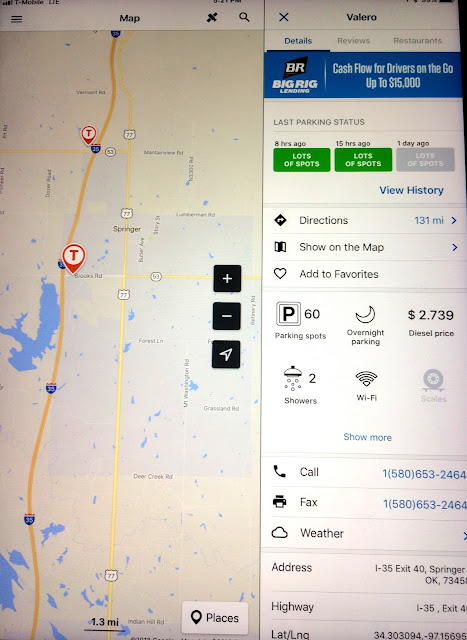 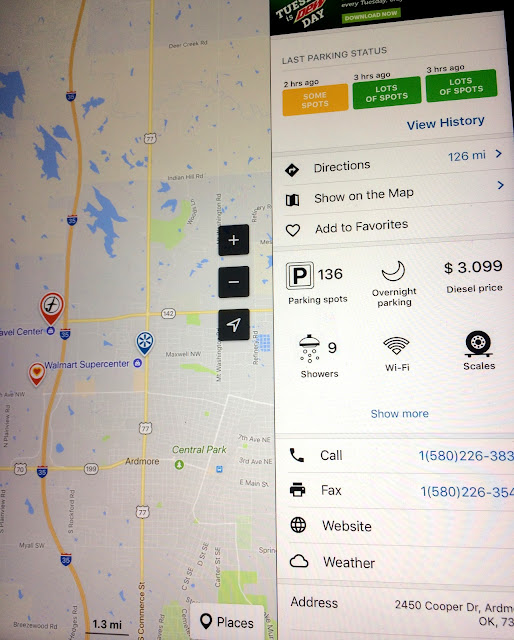 Best of all, Trucker Path is free!


Looks like good weather is going to stay awhile, so it's high time for Phannie to get a bath. Here is James, of Rec-RV Wash, hard at work sprucing up the old gal: 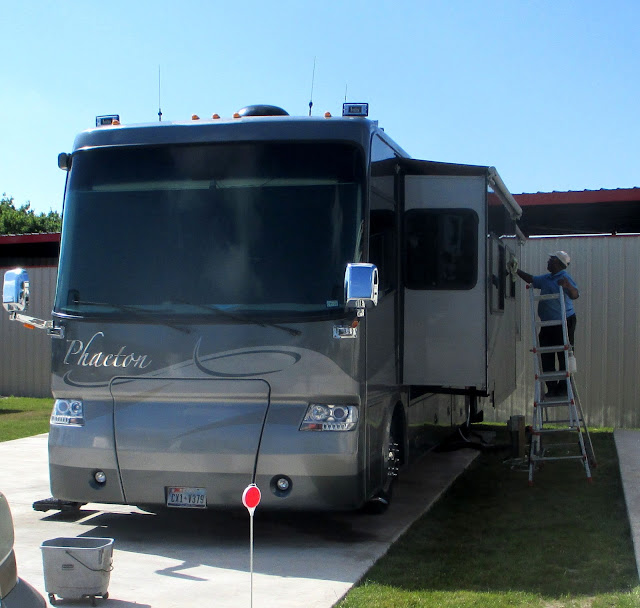 I keep adding listings to the "Best of the Best RV Parks" page linked on the right side of this blog. The new ones added this calendar year are identified by this 🔺 icon. Some of these have been listed as a result of reader input (thank you, Steve and Jackie) that I always appreciate! This list has proven to be a very popular resource with several thousand hits already. If you know of a park that should be listed, please leave me a comment, and I will be happy to take a look.

While shopping at Trader Joe's today in Fort Worth, Sandy discovered in her grocery cart a set of car keys that had been left behind by the previous user. She immediately took them to the manager's office, where the distraught lady who lost them happened to be standing. According to the manager, the lady and store employees had been looking everywhere trying to find them, to no avail. The lady was very relieved and thanked Sandy profusely. After she had left, the store manager walked up to Sandy with the bouquet of flowers pictured below and expressed her appreciation on behalf of Trader Joe's.

Well, impish opportunist that I am, I quickly grabbed the flowers from the manager and handed them to Sandy, saying, "Happy Mother's Day, honey!"

The manager, suddenly scowling, just as quickly grabbed them back, saying to me, "Not so fast, buddy; you don't get off this easily." Then Sandy took the flowers, and both ladies high-fived each other. Shameless hussies, I thought.

Okay, maybe it wasn't my finest moment of chivalry, but you have to give me credit for helping affirm the age-old belief among all women that deep-down, every guy has the potential to be a jerk. (That was my goal, of course; and to my male friends--you needn't say anything; I know I'm your hero.) 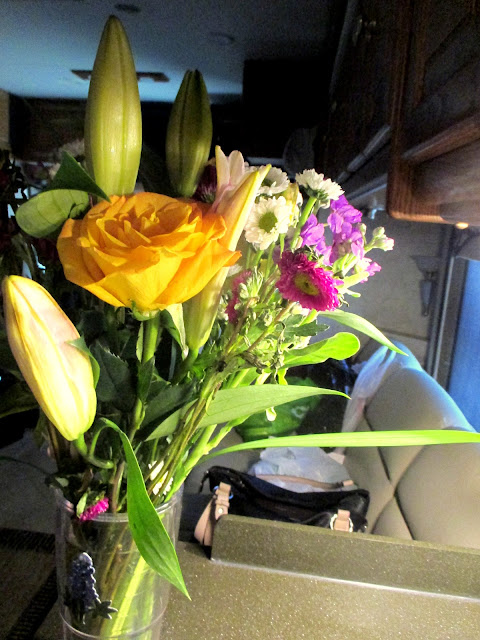 This little good-natured exchange was all a lot of fun, and you just gotta love Trader Joe's, right?


The best part of the day was a fun-filled lunch with good friends Mary Lou and Harvey at Abuelo's, where we talked about our upcoming Hawaiian cruise with mutual friends Bubba and LouAnn.

We had a very short stop here in Fort Worth for a doctor visit, then it's on to central Texas to visit friends and relatives.