A Stop in Biloxi for a Seafood Fix

We are on our way to Pigeon Forge, Tennessee, taking a southerly route this time. This will be the second time we've attended the week-long National Quartet Convention there, something we always enjoy. On our last trip a few years ago, thieves broke into Phannie at the RV park and stole my new Apple MacBook and some of Sandy's favorite jewelry. (Here's a link to that post.) Hopefully, we won't have such an incident this time to dampen our enjoyment.

Since we were leaving from Conroe, it was handy to stop near Beaumont to see Ronnie and Kathy, friends from our RV club. It was great to see Ronnie doing better after having suffered a broken ankle. We also got a tour of their beautiful home after its having been completely remodeled and refurbished after being flooded in the hurricane last year. 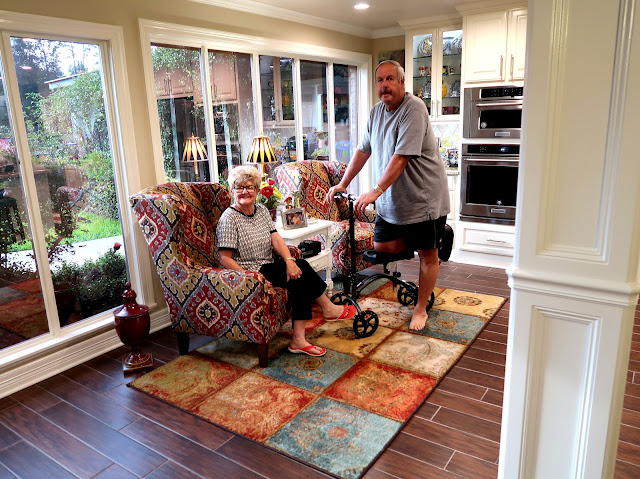 Although this has been a challenging year for them, these folks are fun to be around as always. I was especially taken with his newly-acquired and completely restored '65 Corvette. He said it has taken away some of the pain of having lost two other vintage cars in the flood: 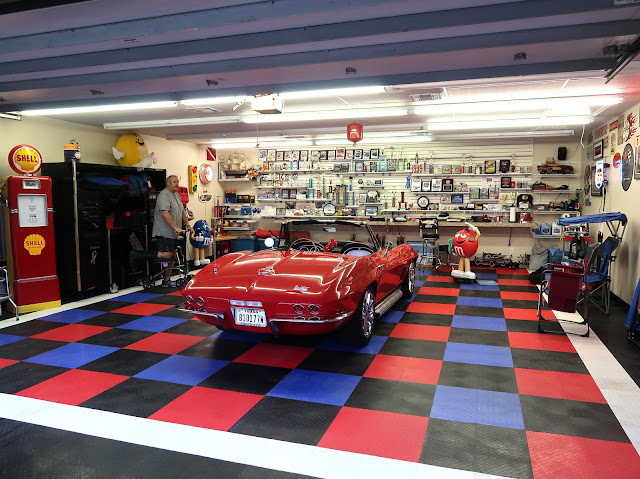 In keeping with my aforementioned determination to push for longer legs and more stopover time, Phannie handled the 312 miles to Biloxi without a hiccup. I-10 was in pretty good shape, although it was rough and under construction in places all the way from Beaumont to the Louisiana border. The interstate was actually in much better shape in Louisiana and Mississippi, something that surprised me, as Texas highways are usually some of the best in the country.

Making a two-night stopover in Biloxi gave us a little time to do some sightseeing and finding some good seafood. And that we did, adding two of these to our favorites list linked on this blog. The first was Wentzel's, where we had a blackened red snapper topped with mushrooms, crab and shrimp in a lemon butter sauce: 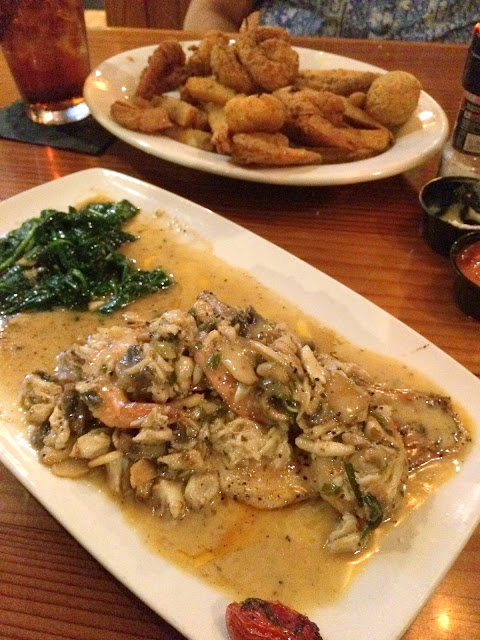 Yes, it was nothing short of fabulous. Sandy had their daily special--ten fried shrimp for ten bucks--what a deal!  As it turned out, she confiscated a good bit of my snapper, relegating me to finishing her shrimp. Yes, we were stuffed, but my excuse was that I had eaten only a cup of chili during the whole day. And no, I'm not sorry; it was that good.

The next day, we went to nearby Ocean Springs to give Bozo's a try. Bozo's is a combination seafood market and grill that has been around forever. It is a local legend for good reason: Incredibly fresh seafood, expertly prepared and cheap. It was mid-afternoon when we arrived, and the place was packed. Toward the end of our meal, the crowd had thinned out enough for me to take this photo of the interior, showing the seafood market to the left and the grill alongside to the right: 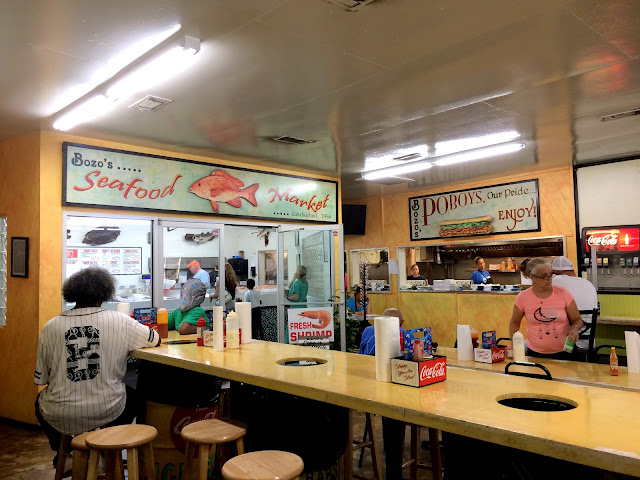 We dearly love finding wonderful little dives like this that usually only the locals know about. We got a scrumptious shrimp po-boy that was ample for us to share for only $5.75. Unbelievable! 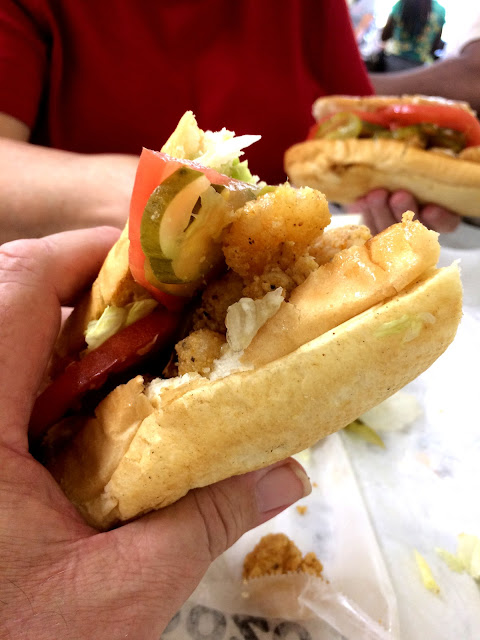 It's not often that two restaurants in a row gain placement on my favorites list, but such is the case here in Biloxi.

Even though it was hot and humid, I had to spend a little time walking on the beach near sundown, marveling at the powdery white sand so different from that on Texas beaches: 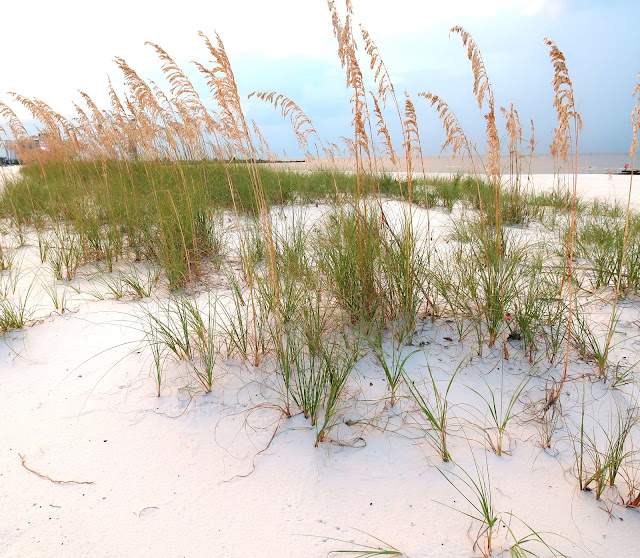 I also found this colony of seagulls (yes, that is the correct term for a group of seagulls) standing on the beach, mostly facing east. I determined they were probably Muslim seagulls: 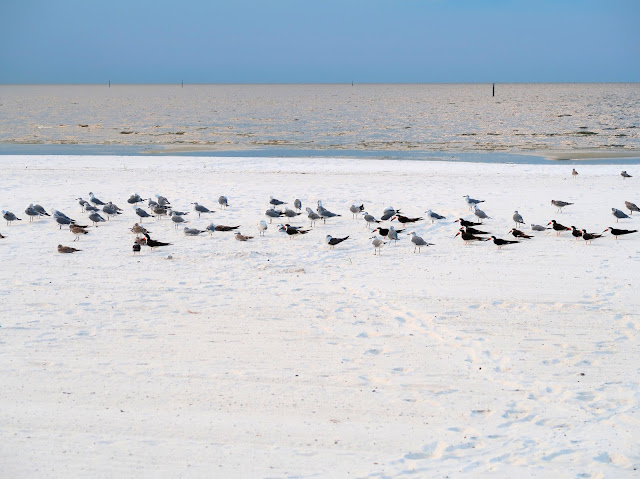 Looking west, I had to get this photo of the setting sun: 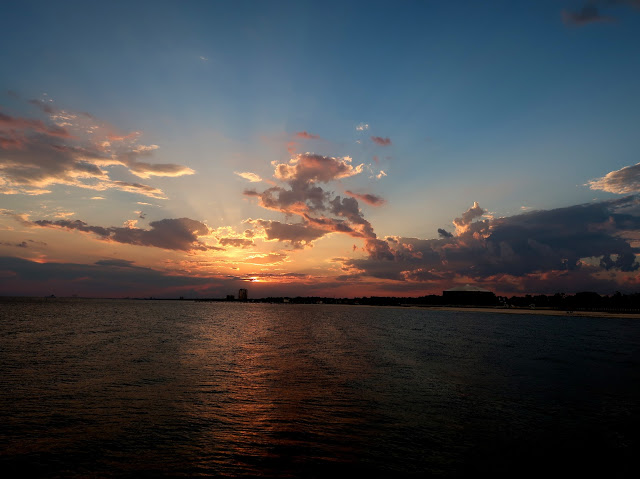 I am a sucker for sunsets, and I find the pursuit of these simple pleasures much more enjoyable than watching the insufferable news on TV. Having always been a news junkie, this has not been easy, but I'm sure my blood pressure has lessened a good bit now that the TV is turned off more often than it's on.

From the same location, I pointed the camera to the northeast and caught this photo of a late afternoon thunderstorm that was collapsing and dissipating now that the sun, its source of energy, was slipping below the horizon: 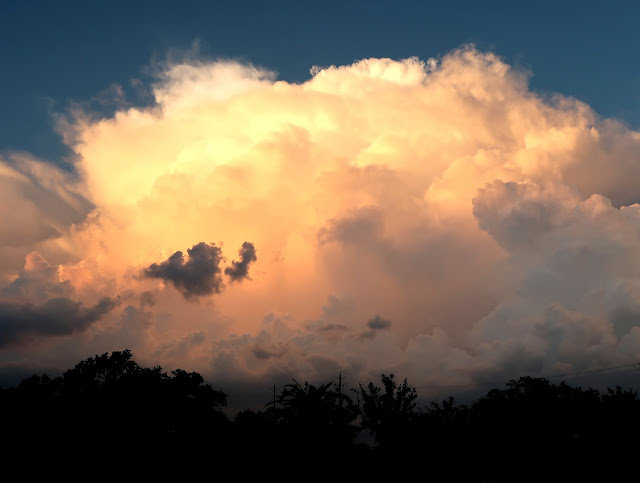 So, had we stopped here for only one night, as has previously been our practice while en route somewhere on a schedule, we would not have had the experiences I have related here. So, I think we're on the right track, so long as we don't overdo it. It would be better, of course, to give ourselves a generous number of travel days when we have to be somewhere by a  specific date. Due to other obligations, we couldn't do that this time, so this is a decent alternative, I think.

I took a couple of photos of our RV park here in Biloxi, a very nice Passport America park. Another bargain! 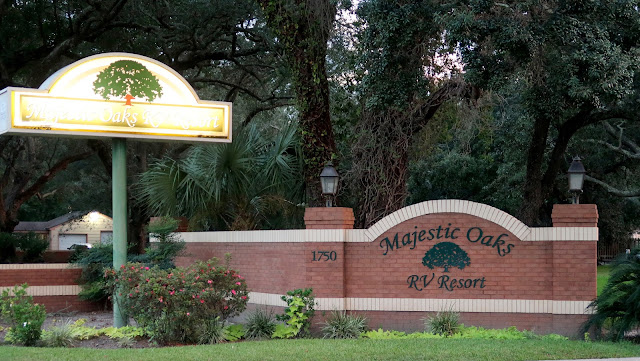 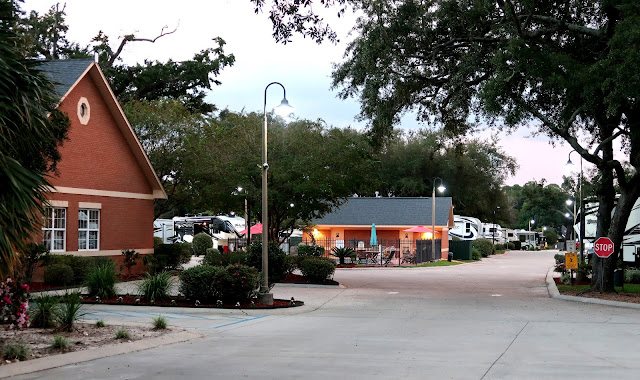