Fulltiming: Three Years Behind Us; How We Got From Big House to No House

As we are settled in here among the palm trees in the sunny RGV, we contemplate the anniversary of our third year of this fulltiming adventure. We continue to marvel at the hoards of friends we have made along the way, many of whom appear in the pages of this blog from time to time. Just before we left Thousand Trails in Conroe, our friends there joined us at a favorite Mexican restaurant. We feel so lucky to find ourselves among such great people, and we will be eager to see them again when we return: 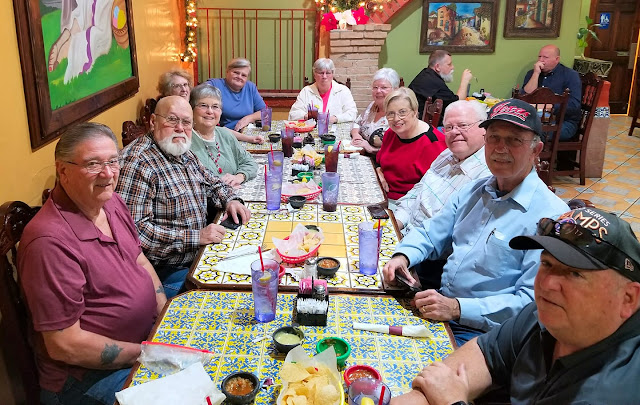 Here in the Valley, we've already been running around with pals from Mission like Denny, Jackie, Kellie and Jim below. (For some reason, I missed getting pics of Ed and Marilyn on our trip over to Mexico on a cooler-than-usual day): 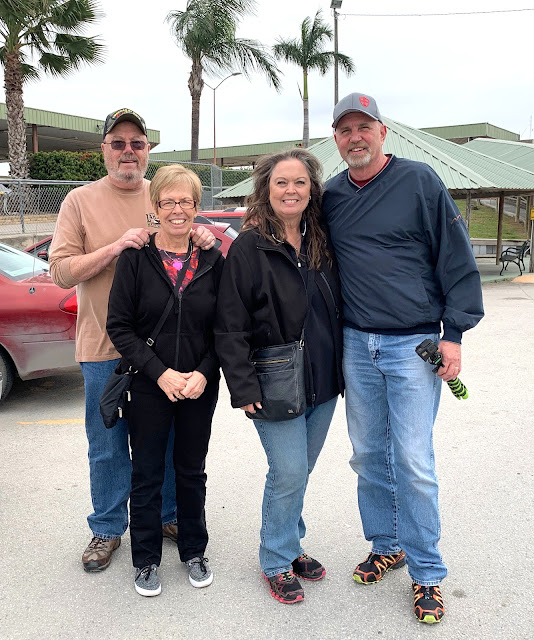 Aside from these fine folks, we've also enjoyed being with our friends here at Victoria Palms that we've already mentioned in a previous post. In about a week, we'll be joined by Jackie and Steve and, after their visit, Sandy's sister, Brenda, will be joining us for the first time!

This third anniversary brings with it the unexpected news that no fewer than four couples of our fulltiming friends are leaving the road for various reasons! Exit from the lifestyle is expected at some point for all of us, of course, but we really weren't anticipating this sudden coincidence. That doesn't mean they won't still be our friends, of course, but it is a bit jarring to realize we won't be crossing their paths as often.

So, how are we doing three years in as fulltimers? Well, we would have to say, "Terrific!" We have no inclination that we need to contemplate an exit yet. We are still blessed with good health, and  our fitness for travel will likely be the determining factor when the time comes for a change.

As we think back over these three years as fulltimers, we can't help but contemplate our history of home ownership and how we got to the fulltiming decision. We cringe when we think of some of the housing decisions we made during our four decades together, especially during the earlier ones. These decisions could have been much better if we could just have had some of the wisdom we have gained in our older years. Bigger and better was what everybody was supposed to do, right? If only we could have had the life lesson before the test instead of the other way around...but that's usually not the way life happens, does it?

It took 40 years for us to become houseless. Our first house was a nice little ranch style on a cul-de-sac in which we lived when our  children were born.

After a dozen years there, a job change came that would necessitate a move. For some reason, I had the notion that we should have a big house in the country with some acreage, so we built an enormous house on five acres in a rural location that would require both of us to do a long commute to our jobs, which then were in opposite directions from the new monster house.

It wasn't long until we began to realize that we didn't own the house; it owned us. I had to buy a diesel tractor with a mower deck to keep the weeds at bay from the five-acre yard, and we couldn't find or afford housekeeping help for the 3,400 square feet of house, including its four bathrooms for the three of us. Sandy had to maintain the vast expanse with little help from me, as I was usually on the tractor or doing other chores to keep the property up when I was home. After a couple of years, it became evident that we had to get rid of the monster house in order for us to avoid an early demise from exhaustion. I don't have a good explanation for why we couldn't see the pitfalls of this ill-fated adventure beforehand. It seemed like the right thing at the time, but it was certainly more greed than need. We sold the place, happy to see it go.

Duly chastised after my 'country estate' folly, we moved into a nice condominium where no maintenance or yard work was required, so I felt I was on the road to redemption. Then came another job change, this time requiring a move to the Dallas/Ft. Worth area. Because our daughter, Mindy, was only three, we wanted her to grow up in a house in a neighborhood, so we bought a reasonably-sized house that had a very small yard--an absolute requirement of mine because of my still-fresh memories of my enslavement to the big country house with the five-acre yard.


Mindy did grow up in this house and it served us well until she left for college. About that time, it became apparent that we were going to need to bring an elderly parent to live with us. This would require building a significant addition onto the house for invalid care, which we did. But the parent didn't move in after all, and now we had a house even bigger than the one with the five-acre yard! It was now face-palm time again. There we were, roaming around in that cavernous place by ourselves. How could this happen again?

By this time, we had begun RVing during breaks from work, and we thought it would be a good idea to sell this latest monster house and build the perfect smaller retirement home, complete with an RV port. At this point, we knew an RV would always be in our lives, but I figured Sandy would never agree to go fulltime, something I had daydreamed about for years. Frankly, I found no fulfillment in maintaining a house and yard, and I wasn't a tinkerer; I didn't need a man-workshop or a TV man-cave, either, for that matter.

The new house was indeed perfect, built completely to our liking and small enough to maintain with minimal effort, including a xeriscaped yard. The story of selling the big house and building the new one begins here. We spent eight happy years there until both of us retired.

Finally free from our worklife, we left in Phannie on a two-month RV tour of the Pacific Northwest, including a stop in Seattle to take an Alaskan cruise. We loved the freedom to wander as we pleased, untethered to work and household chores. With the ending of the cruise, we came to the conclusion that we really didn't want to go back to our house in Fort Worth. Mindy was married by this time, and she and her family were living near Houston. Naturally, we wanted to spend most of our downtime closer to them and the grandkids. In addition, we were dreading the long-neglected household chores that were inevitable after our time away. Even with xeriscaping, there were always weeds and overgrown bushes to tend, not to mention the mess made by trees, spiderwebs, etc. There was also the matter of the break-in that we suffered before I retired, wherein a burglar took almost all of Sandy's jewelry--some pieces of which were valuable and irreplaceable keepsakes. The house was never the same to us after that; we never got over how violated we felt. On top of that, the possibility of another burglary was always on our minds when we were away. We found ourselves frequently checking our cell phones for the feeds from the video cameras we installed inside and outside the house after the burglary. I'm not sure why we did this, as we could have done nothing about it from thousands of miles away. But it was evidence that our spirit of enjoyment of our travels was always dampened by a 'thing' we owned, and we resented it.

The decision to sell and go fulltime was surprisingly quick after that trip and, astonishingly, it was Sandy who first proposed it! The whole experience is fully documented here in the blog, so I won't go into it now.

That brings us to today--three years into fulltiming and still pinching ourselves that we can actually live like this--having the freedom to do whatever we like and go wherever we wish, free of the obligations, expenses and confinement of a stick-and-brick house. I often say that we feel as though we have stumbled upon a way to beat the system and are having a blast doing it. I sometimes get the urge to look over my shoulder, thinking we're getting away with something we shouldn't and that one day, we'll get caught. I hope not.

In the meantime, here we are in this tropical location, wearing shorts and sun hats, feeling almost guilty that much of the rest of the country is in a deep freeze, as is evident in this photo of the TV news today: 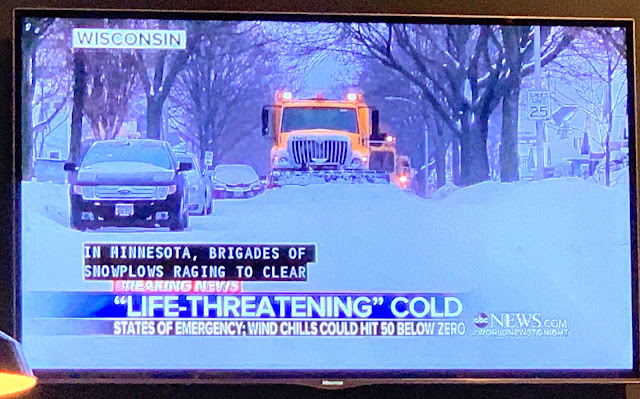 For those affected, we hope you will be safe. But we're very grateful that we are here where we are--which, of course, is a choice we have that's easy to make as fulltimers. Life is, indeed, good.