Old Friends, New Friends and We Meet a Fellow Blogger

When I think about our soon-to-be concluded winter stay here in the Valley and the reasons this place continues to beckon to us as we flee the cold weather, my first thought is about the friends, old and new, whose company we have enjoyed during our wanderings and some of whom are usually here during the winter. We write often of our friends--perhaps too often for some of our readers, but they are important to us, and we like to keep them at least in our thoughts when we're apart. I am ever mindful of that prescient quote from Ralph Waldo Emerson: "Go oft to the house of thy friend, for weeds choke the unused path."

When we see their photos, we sometimes talk about how we first met each of these couples and, with few exceptions, the common thread is the RVing connection. Within that group, the original contact was usually made in one of a couple of ways: By personally interacting with fellow travelers parked nearby or through first becoming a cyber friend through reading RVers' blogs. I used to read quite a number of these in the years leading up to our going fulltime--mainly to assess the authors' experiences and what we could learn from them. And I still read some that are done well and include plenty of narrative along with photos. Blogs that include mostly photos and little story telling don't get my attention. Anyone can post photos; the author's story is the interesting part. While I'm thinking about it, let me give a shoutout to Mary, who writes Reflections Around the Campfire, one of my favorites. She is a talented writer who lets you into her head with a smart and thoughtful commentary about what she's thinking and observing.

We think immediately of longtime friends Ed and Marilyn, whose blog, The Happy Wanderers, we have been following for perhaps the longest time. Ed is another blogger who is more of a  daily storyteller than an picture taker, and his blog has way over a million hits to underscore its appeal. We would have to give them credit for introducing us to a whole gaggle of their friends, whom we now count as friends of our own and, like all of our friends, we think they are the best people anyone could possibly know. Here's a photo of some from that group, sitting outside Ed and Marilyn's coach house a few days ago while John played the guitar and sang. (Notice the warm weather clothing; we mustn't forget to mention that the tropical climate is another reason we're here in the winter.): 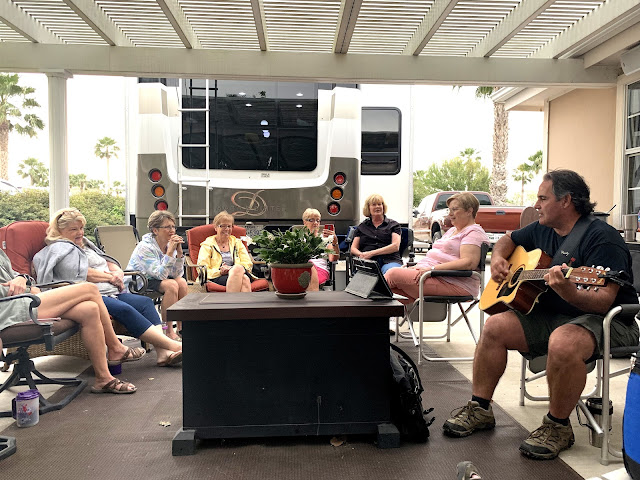 We think of Gordon and Juanita, whom we came to know many years ago through Gordon's blog, written when they were traveling. We think of Dave and Janice, who have a Facebook blog and who introduced us to a wonderful group of pals in the Conroe area. We also think of the friends we've made through rallies of the RV club to which we belong. There are many other wonderful friends--not necessarily RVers, but those whom we've known from other circles and perhaps for decades--who will remain close in our hearts for all our lifetime. Today's focus, however, is really about meeting, right here in the Valley, new blogger friends Mark and Denisa: 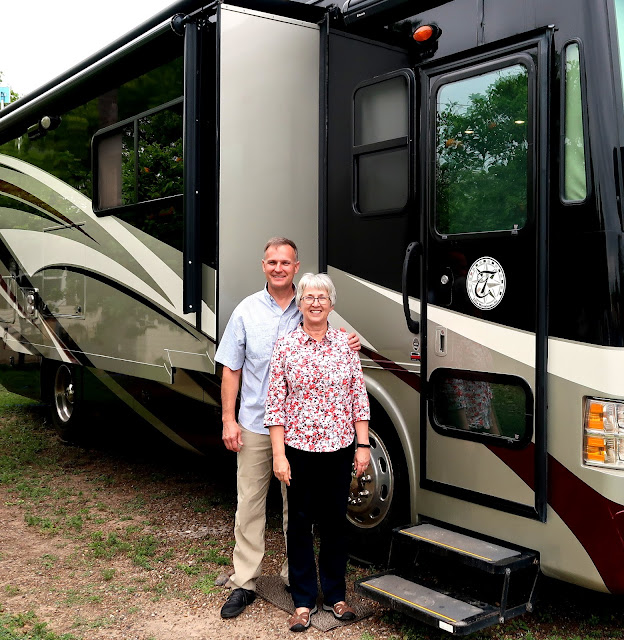 I tend to give some extra ink to RV bloggers we've met, but this delightful couple deserve an extra supply. This would not only be because of their terrific blog, Wandering His Wonders, authored by Denisa, but also because they are just such personable, winsome people. Denisa obviously takes pride in her posts, because they are unfailingly interesting and informative with great photos. If you haven't already found it, it's worth clicking on the link above, for sure.

These fulltiming Oklahomans must have retired early, as they both look annoyingly young. Mark was in the tech world, and Denisa was in academia. They have two sons and recently became grandparents! They also seem tireless, engaging in endless  physical activities such as kayaking, hiking, swimming and dancing, to name a few. Oh yes, and let's not forget pickleball and water volleyball, and there are probably more. Just writing about all of their physical activity is wearing me out; compared to these two, Sandy and I would have to be classified as more vegetable than human. (By the way, if you're trying to picture me as some kind of vegetable, please don't let it be kale or eggplant, neither of which I like. Just about anything else is fine.)

Here's another photo of this charming couple, beside whom rests a bowl of freshly picked oranges and grapefruit from the ubiquitous fruit trees in their RV park and many others here in the Valley. And yes, the fruit in the parks is usually free for the picking: 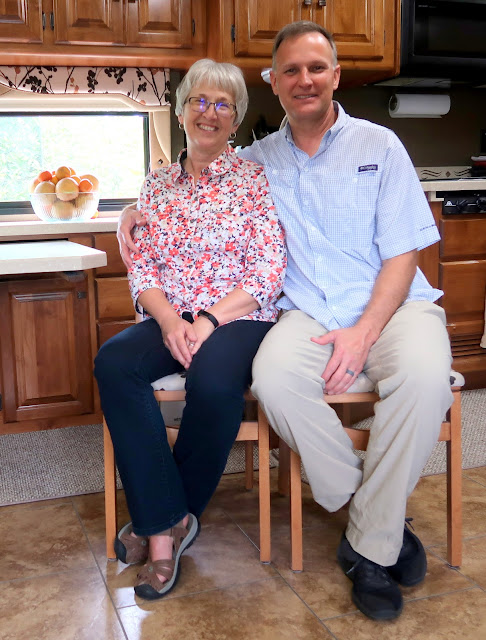 I was delighted to learn that, besides our having a common interest in blogging, Denisa is also a fellow pianist, carrying a full 88-key keyboard piano in their motorhome: 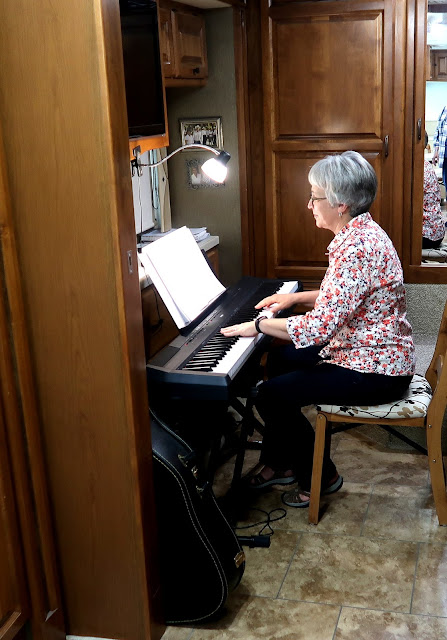 This is a bonus I would also enjoy, but we just don't have the room in Phannie--something that's a little difficult to explain since our coach is five feet longer. (Let's just say that going into that really doesn't serve well my best interests, so I think I'll just move along.) I also notice a guitar case in the photo above, something I failed to inquire about. Obviously, these are talented people who've gotten this fulltiming thing all figured out.

I feel lucky to have access to three pianos here at Victoria Palms, including the nice grand piano in the activity center. Playing for Sunday church service has also been enjoyable, and the practice has helped a great deal. Speaking of the church service, this would be a good place to mention yet another couple of new friends, Illinois residents and Valley snowbirds Linda and Craig, who graciously had us over for dinner the other evening. Linda serves as one of the song leaders at the church service here at VP: 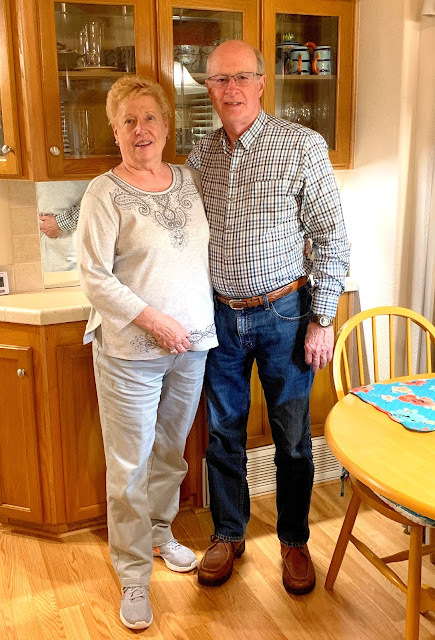 Since we have only about three weeks left here in the Valley, we are often asked if we will be back next winter. We haven't decided yet, as we have never done the snowbird thing anywhere else, such as Florida or Arizona. We think we would like to see what it would be like to spend the winter somewhere in the southwestern U. S., so we might do that next winter; we'll see. We don't think we will be spending any winters in Florida, where it is difficult to find space, and that which can be found is quite a bit more expensive.

I'll mention one more thing--something I posted in the RV Tips Facebook group, but that I'll also include here for the sake of posterity. By the way, my friend Ed Hurlburt runs the group, and he's got about 140,000 subscribers now, as well as a new program offering to members all kinds of vendor discounts. It's well worth taking a look, in my opinion.

I wanted to mention the light over Phannie's dining table that, until recently, appeared to be getting dimmer as we got older. (I'm sure it couldn't possibly be our aging eyeballs that are the problem.) The original fixture installed at the factory was a dinky one that was painfully dim from the outset. We put up with it for a few years, but eventually found a three-light fixture on eBay that was 12 volts and used those infernal white-hot, push-in 921 bulbs. This new fixture was a great improvement but, as previously mentioned, the light just kept getting dimmer and dimmer with the passage of time. It was becoming more and more difficult to see what we were eating or sometimes even to identify the hazy figure sitting across from me who seemed oddly  familiar.

Of course, a better course of action would have been to do a rewire and install a 120V household fixture. We really don't need 12-volt lighting in key areas like this because we never do boondocking. However, that sort of project is well beyond my level of expertise and, perhaps more importantly, my level of energy, which we have already established earlier in this piece. Then there's always the possibility that any shadetree installation of mine involving electricity could result in some catastrophe that might involve the summoning of first responders.

I had been looking for some LED bulbs that would fit the push-in slots of the old 921 bulbs but that were also bright enough to be the cataract-friendly kind we needed. However, I also wanted the kind that would give off a warmer light than those bright white LEDs that remind me of the fluorescent bulbs in an old K-Mart or something. I mentioned that to someone that the other day, and his reply was that the bright white LED lights are "in" and that I'm a dinosaur. He may be right; some of the newer coaches I've been in almost require sunglasses to be worn inside.

Undeterred by his remark that must have been incredibly insulting to dinosaurs, I found some LED bulbs on Amazon that looked like what I wanted and, with uncharacteristically good fortune, they turned out to be perfect. Here's the URL, if you're interested: https://tinyurl.com/y6gynd4z.

These suckers are almost bright enough to enable surgery to be performed underneath, but they have the warm white color we wanted. I'm including a photo of the fixture with one of the new bulbs in place; the difference is obvious: 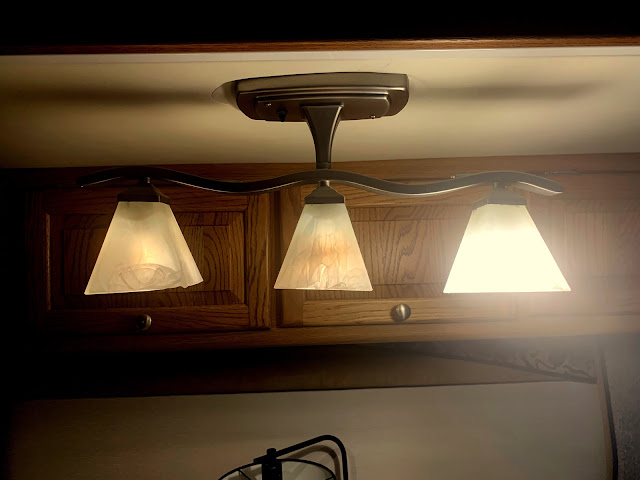 But hey, that's just me; I guess I probably am a dinosaur. But I still don't like those ultra bright, fluorescent-looking lights. And the cataract surgery can be put off a little longer.

In closing, we'll be looking forward to a visit in a few days by Sandy's sister, Brenda. We can't wait to see her and show her around.