On The Move Again

At Hitchin' Post RV Park, Hallsville, Texas...
So, whaddaya think about the new cover photo? The old one at Winchester Bay, Oregon was nice, but even I was getting tired of it.
Yes, I know it's been a while since we announced our arrival back in Texas, but when we get back with the kids, there is usually so much going on that it's not easy to find time to write a blog post. This visit was especially short because our nurse daughter wanted our exposure time to be short in the Houston area. We couldn't miss grandson Mason's birthday, however, so we just tried our best to keep our distance from people and keep our hands washed and sanitized. I don't think our hands have ever been cleaner--so much so that I've had to use some lotion to help combat the dryness.
Up to this point, we've felt quite good about staying mostly in small towns and away from crowds, and it seems to have paid off. Even though our time at Thousand Trails in Conroe was short, we were able to get together with nearby friends. We had an enjoyable lunch with Ed, Dave, Janice and Debi: 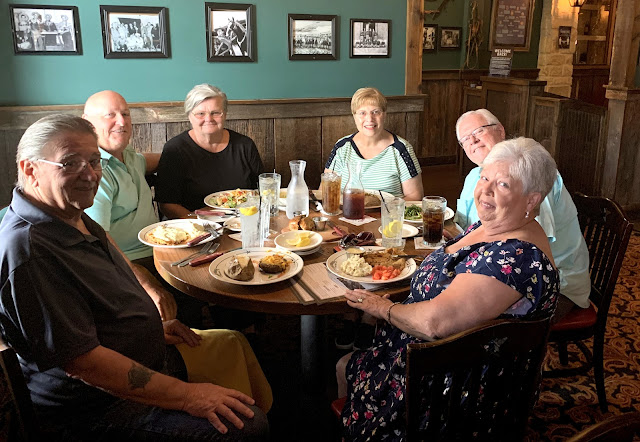 We have a number of friends whom we didn't get to see this time, but we're hoping for better times ahead for visits.
We were delighted to take a tour of Ed's and Debi's new property on Lake Conroe, of which they are rightly proud. They have some big plans for improvements and even a boat house: 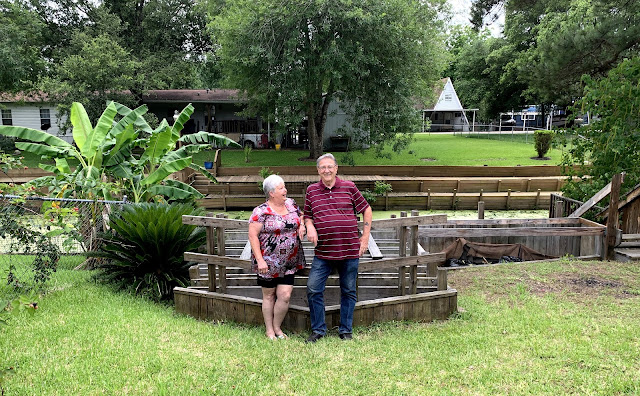 We also had to catch up on some medical appointments, but the real quality time was spent like this, with Sutton (1), Pryce (6) and Mason (11). 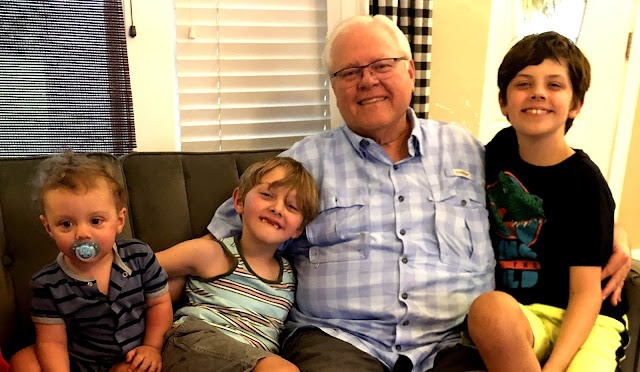 I think I'm pretty lucky to have grandsons to hug on me like these do. There may be a small chance they think I'm a pushover, but I'm really very strict. Why, there was this one time when I actually thought about saying no to something they wanted!
After a tearful goodbye, we are now on our way to Red Bay, Alabama--Phannie's birthplace--to take care of a few cosmetic items and some routine maintenance stuff.  After that, we will be heading toward the Rocky Mountains to escape the Texas summer heat.
By the way, I need to bring you up to date on Sandy's foot problem. It seems that the orthotic we received, while somewhat helpful, is not very effective in easing her pain. Luckily, we have found a surgeon in Houston who has high confidence that her condition can be alleviated through surgery. That will take place in late September, after we return from this trip. Meanwhile, I'm going to try to keep her off her feet as much as possible.
Now that we're on the move again, I'll have more to share, so hang in there, y'all!
Thank you, Lord, for this wonderful life;
please forgive me if I fail to appreciate it each day as I should.
We don't stop playing because we get old; we get old because we stop playing.
---George Bernard Shaw