2020: When It's Mentioned in the Future, We'll Just Smile Nervously and Change the Subject

This year just keeps on giving, doesn't it?  I mentioned Sandy's foot surgery in the last post but, since then, things haven't gone so well. Five weeks after the initial surgery, it had to be redone because a screw came loose from the straightened array of bones, and one of the bones broke. The surgeon replaced the screws with metal rods to hold the bones in place. He said this was the old, tried and true method, although it is more painful, obviously. The ends of the metal rods are exposed outside the foot, so they can be removed when the bones have fully fused.  This means, of course, that five weeks of recovery have been lost, not to mention the added pain of metal rods inserted into her foot. Sandy calls them "swords," which probably gives you an idea of her discomfort. Yes, she has painkillers to help, but she refuses to take opioids. I never cease to be amazed at her lack of complaining. I can guarantee you that I wouldn't have handled it as well.  But then, I think God gave pain tolerance to women for a reason:  They are the ones who have babies; if it were left up to men to have them, the population would eventually fall to zero.  I admit to being a resentful whiner when I'm sick or in pain; when I get a cold, I think Sandy considers hospice care for me. When I have my upcoming knee surgery (I'm putting that off for a while), she'll probably trade me in for a new model.

If that weren't enough, Sandy has also been having worsening shoulder pain and immobility, and a recent MRI showed that she is going to need shoulder joint replacement surgery. That will happen after her foot heals sufficiently. Yet she takes it in stride, merely eager to get it all behind her. I simply can't match that; I think I would be looking for a cliff. Well, not really. All we need to remember is that these things are all fixable. When we think not of ourselves, but of so many others whose medical conditions are much worse or hopeless, our problems become small by comparison. But how fitting that all this would happen in 2020.

Well, I have strayed a good bit from the subject of RVs, but I want these thoughts recorded in this blog for that time when the memory isn't as sharp. The year of the plague and the masks will not soon be forgotten.

Getting back to RV life, we think it was perhaps Providential that we happened to be in this fulltiming lifestyle at this time. As it happens, we can easily be isolated and move from places where virus hotspots develop, and that's what we have done, mostly. We were able to stay in lowly impacted areas for months and, after we left, many of them turned into hot spots. Look at California now, for example. When we were there, the virus was almost unknown. We spent the winter, spring and summer in areas of very low population, and we felt quite safe. We wouldn't be here now near Houston if it weren't for the chance of finally seeing the kids if we can get vaccinated and, oh yes, Sandy's surgery.  Thank goodness there's now a vaccine and life, hopefully will get back to normal one of these days.

We are beginning to notice that a surprising number of new RV parks are being built in this area of Texas. I think the park builders are finally beginning to catch on to the great proliferation of RVs in the past few years--especially during the pandemic. It is really hard for me to keep up with the good ones that would be worthy of listing on my 'Best of the Best' page.

Obviously, we're not going to be mobile enough for a while to do much reconnoitering of the 'part time' digs we have in mind. We are looking for a 55+ community of small houses--larger than park models--that are located in inland Texas, not too far from the kids, but not near the coast with its humidity, hurricanes and mosquitoes. There are hundreds of these communities in Arizona and the Rio Grande Valley of Texas that are beautiful and well-landscaped, but they are too far away from where we want to be. We've looked at Del Webb, Robson Ranch and such developments that are within our budget, but their houses are too large. If we wanted that, we would have kept the house we had. We're accustomed now to minimalism, and we like the simplicity of a small space; however, we're nearly convinced that what we're looking for in a 55+ housing community doesn't exist outside the hellish heat areas like those we've seen in far-away Arizona and in south Texas.

It was nice to see old friends when we returned here at TT Lake Conroe. We even met some new ones--new to us, not our other friends--and we have been in (safe) contact, as in this outdoor lunch at P. F. Chang's the other day in The Woodlands: 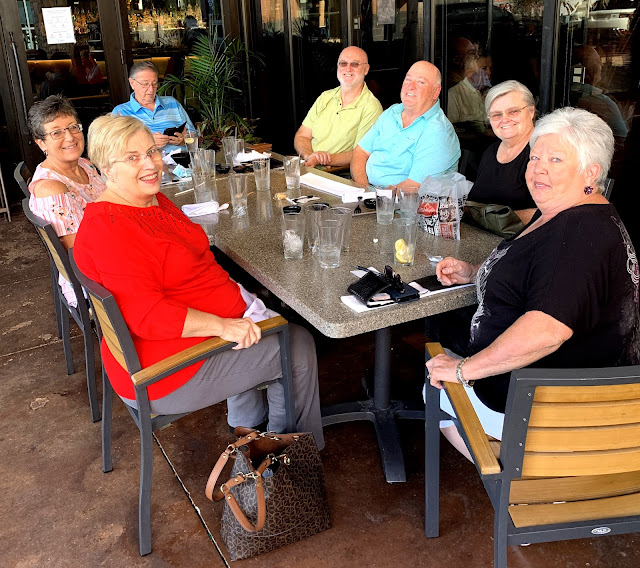 Clockwise around the table, starting with Sandy-- Janice (new friend), Ed, Rick (new friend) Dave, Janice and Debi. Sandy was in a good deal of pain during this lunch, but it wasn't going to prevent her from having such a good time among dear friends.

I think I'm going to toss into these posts a favorite photo from our travels while we're grounded. Maybe that'll make it a little more interesting for newcomers. I know we'll enjoy seeing them again. By the way, if you're new to fulltime RVing, I urge you to keep a journal of some kind. Our blog helps us remember so many things we've forgotten. When you get older, you'll understand.

Here's a nice view of the Grand Canyon at sunset:

We'll keep you posted on Sandy's progress. In the meantime, please include her in your prayer list.