Next, It's My Turn for the Scalpel, So We Are Gonna Be Rolling Until Then

I can just hear you now..."Big Spring?" What are they doing there?  Okay, I have been seriously lagging in posting lately, but there hasn't been much going on. As I mentioned before, we had been at our place in Hondo for several weeks while Sandy recovered from the last of four surgeries. She is almost fully back to normal now, thankfully, except for a bit of partial nerve numbness that the surgeon said would eventually go away.  While we were in Hondo, we enjoyed the company of friends Richard and Karen, who recently acquired a sparkling new RV to replace the one lost in the terrible hailstorm described a couple posts back.

Karen had mentioned that she would like to be able to cook really good fried rice. This seemed a bit coincidental, as I fancy myself as somewhat of an expert in cooking this dish. Never wishing to pass up an opportunity for self-aggrandizement (which is, hopefully, recognized as merely an act), I volunteered my services in rendering the best version I could, as long as I could use her beautiful new propane stove--which works a bit better than our induction unit for cooking things that require a lot of heat. One evening, we traipsed over to their new rig with all the ingredients needed, and the general opinion afterward was that I had outdone myself. This was one of two skillets full of the yummy stuff: 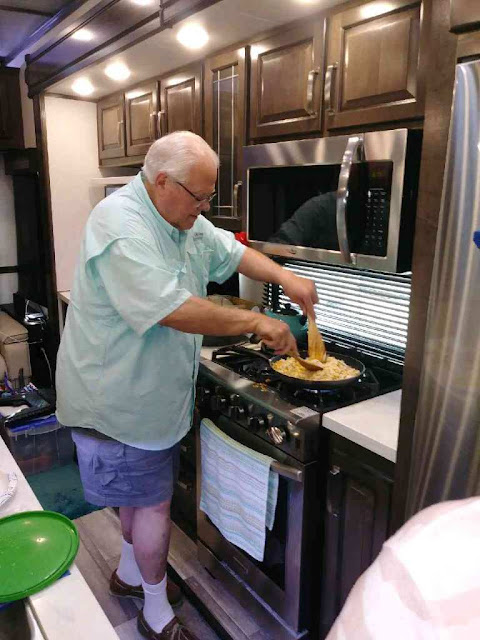 Okay, okay. I know that fried rice is easy to make, if you do it simply. It's also an especially good way to get rid of leftover stuff in your fridge. However, I have developed--through an untold number of versions--a combination of ingredients, technique and seasonings that I think most will agree has no equal. And I didn't even have a wok this time!  Share the recipe?  I haven't written it down, and I'm not sure I could, since I mainly just do it by sight, smell and taste. One tip, however, will always be true: Make sure you cook the rice using less water than the usual 1:2 ratio. In other words, if the instructions on the bag call for two cups of rice and four cups of water, use only three cups of water. This will give you firm grains of rice instead of mushy ones and allow better absorption of the seasonings and sauces during cooking. Finally, make sure the cooked rice is thoroughly cooled before cooking. I often cook the rice a day ahead and leave it in the fridge overnight before starting the fried rice. Never, ever use those boil-in-a bag minute-rice things. That is such a travesty, it's probably illegal. I do use a rice cooker; it makes things so much easier.

Another accomplishment this time was to bring everything from paid storage to our cabin in the park. This is the first time in over five years that we have all our personal keepsakes with us in our own digs. Even these will be thinned out over time, as we continue to open containers and ruminate over the contents.

I have enjoyed my new Kawai electric piano immensely. It will never be the same as my Kawai grand piano that is still in storage, but it was so good to sharpen my technique again with this one.

Things are slowly improving in the park after the hailstorm disaster. All of our repairs which, thankfully, were relatively minor, have been completed, but others are awaiting insurance settlements, and some occupants just walked away. This will not bode well for their resale funds, if there are any to be had for them after the park makes the needed repairs.

One of the things that was essential when we decided to buy into the Hondo Escapees park was that the building on the lot (which is large by RV park standards), would be small, and it is at 12x24 plus a 9-foot porch. Even so, it will still require minimal upkeep. I was reminded during this visit that even the smallest structures and yard still need attention. The yard is entirely covered with aggregate, but weeds still appear now and then. It has to be cleaned, and there's always some little thing that needs to be fixed. The fact that one can live there for almost nothing makes those tasks a little easier, however. The rapid increase in home prices, building materials and taxes these days makes the deal we have even sweeter. If we need to take a break from small-town living, our proximity to San Antonio makes that quite easy.

Oh, I see I have digressed. Let's get back to Big Spring, Texas. We have left our compound at Hondo for a whole series of trips before my first knee replacement on November 4th. Big Spring was our first stop on our way to Colorado, where we will be with friends for the rest of the summer. It is way too hot in Hondo--and most everywhere else in Texas--during the summer, and we are very late in our usual escape to cooler climes.

I think I'll keep you in suspense about our fall itinerary after Colorado, but a lot of it has to do with other friends with whom we love to travel. I confess there may even be some desire on my part to keep my mind off what's going to happen to my poor knees in a few months. These trips are not easy for me, either; I move slowly and try to find ways to minimize the pain involved in setting up and breaking down camp. Walking, thankfully, is not much of a problem yet, so perhaps I will not be too much of a drag if we're in a group.

Since we haven't been on the road too much during all of Sandy's medical issues, we were astounded today at how many RVs are out there. I wish I had counted them, but they seemed about equal to the number of trucks on the highways. Also, there is a certain strangeness to this RV park, where perhaps the better part of a hundred RVs are parked tonight. That strange thing is this: out of all those RVs, only one of them is a motorhome--ours. I know Phannie feels conspicuously out of place, but I'm beginning to realize that the meteoric rise in RV sales must be much more in towables than motorhomes, and the obvious reason, of course, is the difference in cost.

One of the places we're headed for sure in September is Red Bay, where Phannie is going to get some new flooring. This faithful old girl could use a little dressing-up inside, but I'm not sure we could ever give up a rig that has been so dependable and trouble-free over all these years. (I hope I haven't jinxed myself with that remark.)

I will have more frequent posts for the next few months, so you can keep up with our  adventures, which will come to a screeching halt from November through spring, as I get new knees and recover from those surgeries.

Oh yes, I almost forgot. I'm going to include a favorite photo from some of our earlier travels--this time from Colorado, which I think is quite appropriate. I snapped this just outside Silverton, Colorado in late September. The fall color was just beginning. It must have been stunning a little later. 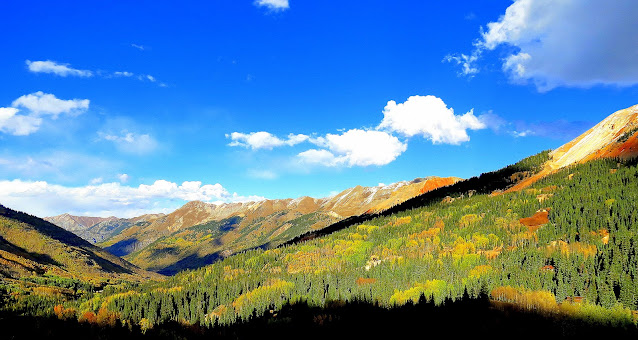