If you read the last post, you learned that Phannie was on her way to Red Bay to get new carpet in the bedroom and her annual "well-woman check," as Sandy puts it.  (For guys, that's getting the oil changed in Phannie's engine and the generator, as well as a changeout of all the fuel, oil and air filters, as needed. For a woman, I think it's an entirely different thing, but I'm afraid to ask.)

Bay Diesel's shop in Red Bay; nothing fancy, but number one on my list for performing repairs: 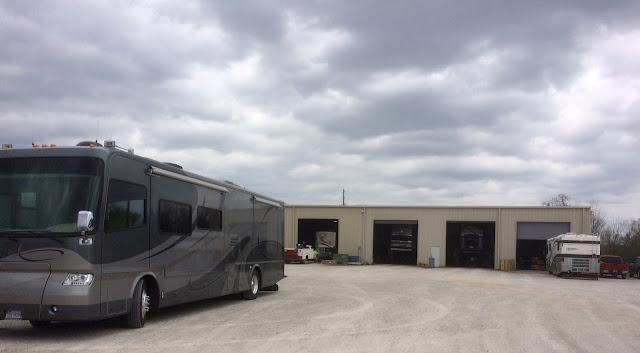 As part of the annual check, Bay Diesel also tests the condition of the engine coolant, and it was found on the verge of needing to be changed. Well, we can't have Phannie running around "on the verge" of something, so that will also be done at 7:00 a.m. in the morning. Yes, I looked at a clock with hands on it, and there are, indeed, TWO sevens on it. Well, there aren’t really two, but there may as well be. We rarely have anything to do with the one through which we sleep in the morning; I had even forgotten about it altogether. As a result, we have, among the frenzy of hand-wringing about this ungodly show-up time, been thinking of ways to accomplish this and still get a little shuteye. We even thought about having Phannie towed there while we were in bed, but this would probably wake us up in the process. We think we've come up with a plan that will involve all sorts of short cuts in our normal departure routine, and who knows what we will leave behind or undone? We'll let you know how it goes.

Red Bay, in case you didn't know, is a little town built around the idea that working hours for just about everyone is 7:00 a.m. to 3:00 p.m. This is several hours before we become coherent so, for us, it's like being in Switzerland or somewhere. The reason for these working hours is that the giant Tiffin factory employs almost everyone in town, including husbands and wives, and somebody has to go get the kids at school. To accommodate this, the whistle blows at 3:00 p.m., and there is a mad dash to the schools.

Okay, I'm digressing, as usual; back to the subject of the post I go. Everything went perfectly at MS Solutions with the carpet. We finally have new bedroom carpet that will be much less likely to show every blemish and piece of dust that got near the old light-colored carpet: 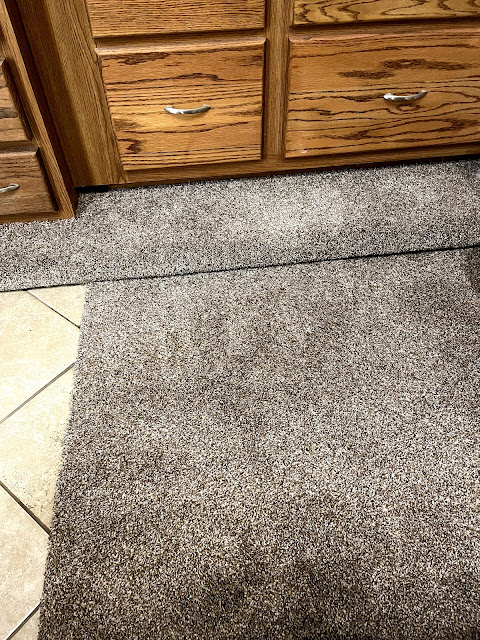 This new addition was so inspiring that we decided to change out the center-aisle rugs throughout the coach: 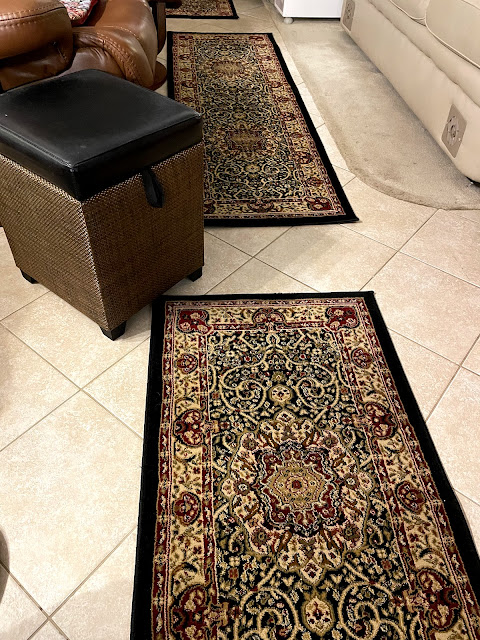 In this photo, you can see the old putty-colored carpet that remains in the lounge area. We can't wait to get it changed. Keeping it clean--especially since going fulltime--has been the bane of our existence. I think when they remove it, we're going to have a bonfire. No, that's not a good idea--the smoke may be toxic!

Well, we were on a roll, so to speak, with the new carpet. We checked into the newest, nicest RV park in Red Bay--Red Bay Acres--and began to think about more well-deserved upgrades for the old girl. 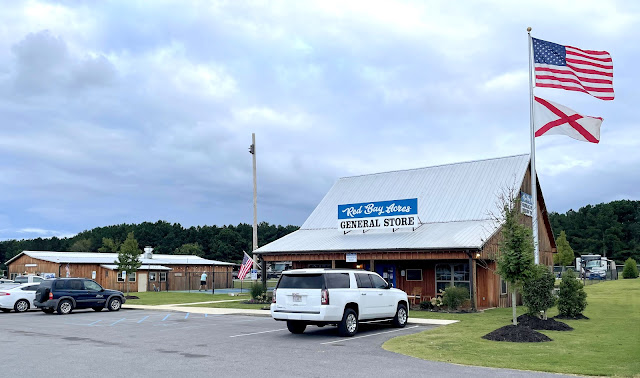 One thing jumped out at us--Girard Awnings had just built a new RV awning factory and installation center next to our RV park, and wouldn't you know that Phannie just happened to need a new door awning, She had been without one since the old one decided to pop out and become a winglet a few years ago. You can read about it here:  https://mills-travels.blogspot.com/search?q=door+awning.  This seemed like a sign!  I traipsed over there and found they were more than happy to sell me a new door awning...and I could even show up at the much more humane hour of 12:30 p.m. Now, this was more like it! I showed up on  time, went to lunch with Sandy. Our sandwich, with the awning as dessert, was a paltry 1500 bucks or so. An Alka-Seltzer helped a bit, and at least Phannie had a new door awning: 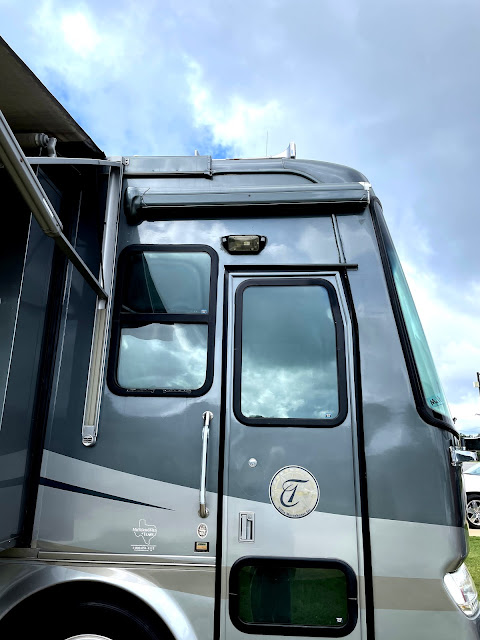 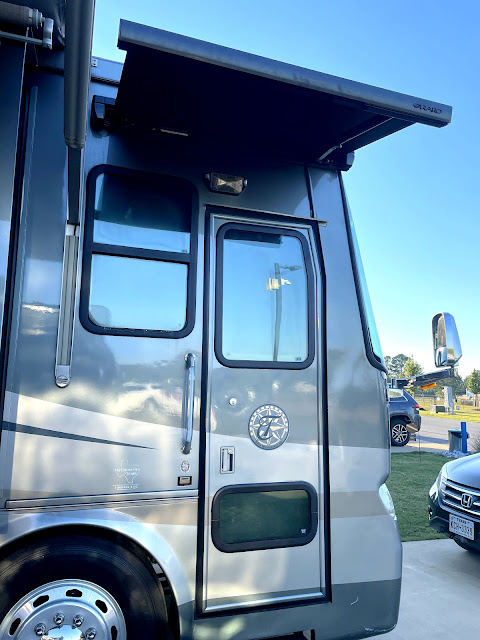 When the door awning first went kaput, we thought it wasn't that big a deal, but after a few rainstorms when we needed a little protection from the elements and sometimes needed a break from the hot sun, we decided it was worth the (gulp) price.
The Girard factory:

Phannie's in the bay for her awning while Sandy and I have an expensive lunch... 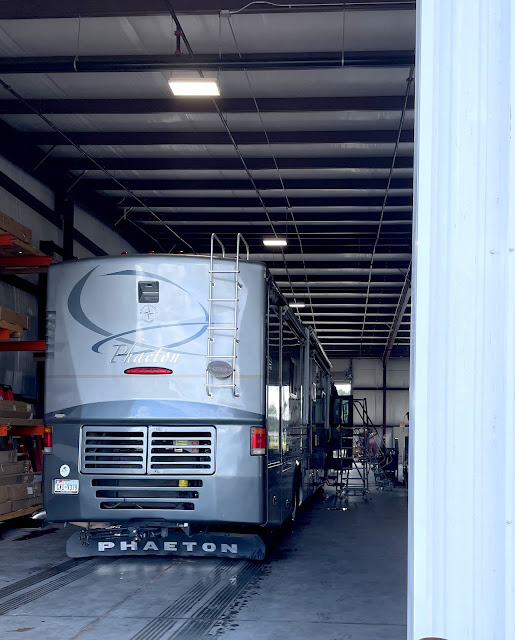 But were we through yet? Oh no, we've left earth's orbit! We had always been a little disappointed in the original lighting provided on the outside passenger side of the bus, which was, in reality, almost useless. And then, along came the digital age, and we couldn't help but notice that the newer coaches were being adorned with all sorts of LED light strings that even illuminated the ground underneath. Then we noticed they would change color, giving an effect that, well, may be appealing to some, but disco was a long time ago, and we old fogies were perfectly okay with white. Not wanting Phannie to be left lightless in her golden years, we ordered a string of LEDs under the awning and a set under the passenger-side slide, giving a nice effect at night, especially when we have outdoor guests. What we didn't realize was how sophisticated the system is. After installing it, the technician showed us how it was operated not by a switch, but from my cell phone! Not only that, it will also change colors, mimic a sunset, and even do a disco effect--flashing in rhythm to whatever rock tune I might have going on the phone!

This was hardly what I had in mind, and I can see visions now of my daughter watching her 74-year old father rockin' out to some heavy metal with disco lights in the background. I would probably never see her again!  (I have to admit that, in learning how to use the system, I accidentally turned on this feature, and I was frantic to get it turned off and back to white. I can just see Sandy trying to explain to the EMS attendants what I was doing at the time of my collapse.)  Here is a non-disco photo of the lights as they will be run unless I mess it up again: 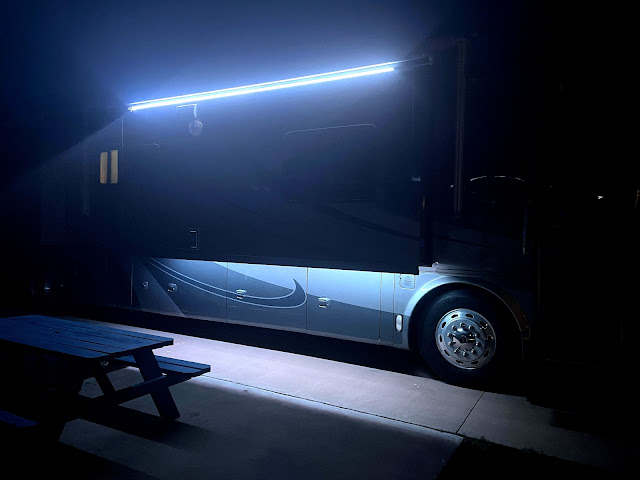 Who knows what Phannie thinks of all this bruhaha?  She probably feels like Ethel Merman with a new necklace! No matter, the old gal has been good to us, and she deserves some special attention.

An unexpected plus was the surprise arrival of Don and Linda Cochrane, with whom we have been socializing for the past few days. They are always a lot of fun, and Don seems to have an inexhaustible supply of stories--as all of us pilots do. It's been enjoyable for a couple of old pilots to do "hangar flying" if not the real kind. So far, I think the lies have been kept to a minimum. 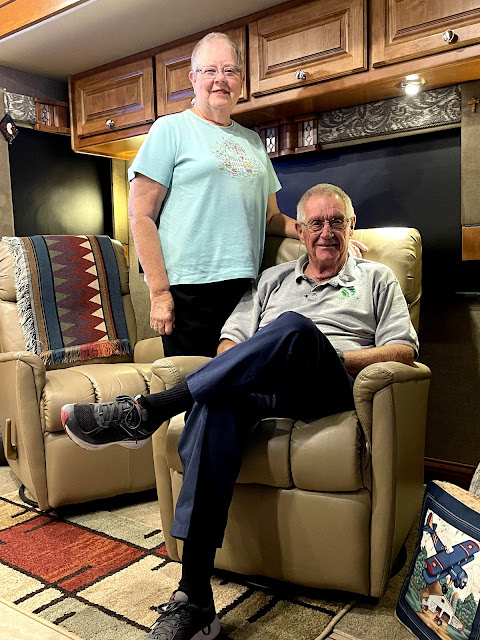 We will be headed back to Texas with a couple of stops with friends along the way before going back to Hondo. After that, we will be heading back north to Branson, where we will spend a couple of weeks with friends before my first knee surgery in November. But more on that later.  Here's hoping you will all stay well and happy until we meet virtually again!