Gunnison for the Summer

We had really begun to enjoy our nearly month-long stay in Cortez, especially when Steve and Jackie joined us at our wonderful West View RV Park. But it was time to make tracks for our "gig" in Gunnison, first with a stop in Grand Junction for Phannie's annual service. We had an appointment with Inland Truck there, and they were super-accommodating, as have been all the Inland facilities we've used around the Southwest. Luckily, the shop was directly across the street from Junction West, our RV park, so we didn't have to get up too early to make our 0900 appointment. Here's Phannie--all finished at Inland and ready to go: 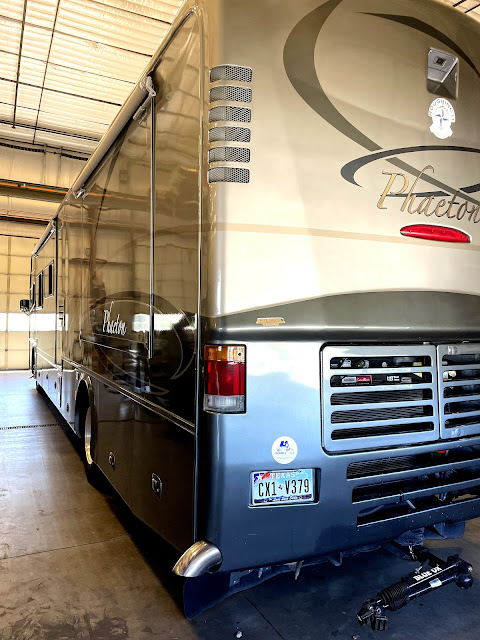 By the way, for you techies out there, Phannie has a Caterpillar C7 engine, an upgrade of the legendary 3126, used in countless pieces of construction equipment across the world. Upgrading the 3126, Caterpillar built 300,000 C7 engines, which were used mainly in over-the-road trucks and RVs. It has an expected service life of 500,000 miles before overhaul, which means--knock on wood--that Phannie's engine will outlive me. It does have a weakness, however: It insists on having clean oil and clean fuel, something about which I am obsessive, following the manufacturer's service specs religiously. Perhaps that's the reason--along with a fuel additive that I've mentioned before--that the engine has performed flawlessly for 120,000 miles now. And I delight in the fact that I've never had to buy a single drop of DEF.

When the EPA requirements became really onerous in 2010, Caterpillar decided it could not build their over-the-road engines and still retain their near-bulletproof reputation, so they simply stopped building them, concentrating on engines for construction equipment that is not subject to the same EPA emission standards.

Okay, let's get back to our trip to Gunnison. Highway 491 from Cortez to Moab was vey scenic--especially around Moab, one of our favorite places. However, from Moab to Grand Junction, including an endless hour on I-70, was a different story. To call it wasteland would be way too generous.

Grand Junction is a bustling place with lots of new construction (and places to shop, which thrilled Sandy). However, it is just too danged HOT in the summer--like 100 degrees hot! I couldn't wait for Inland to finish their work so we could get to higher ground and cooler temperatures.

On U. S. 50 between Montrose and Gunnison, the highway is reduced to one lane due to an apparent washout some time ago. We were at a standstill for about an hour while a single stream of vehicles took turns each way through the construction zone. The highway was leading ever upward, however, and we noticed the outside air temperature gauge decreasing steadily with the rise in altitude. We stopped for lunch at the top of a pass just west of Gunnison. At 8,300 feet, the fresh mountain air was exhilarating!

It wasn't long until we had descended to the Gunnison River Valley, where U. S. 50 snaked along the beautiful shore of Lake Fork, formed by a dam of the river.  Here is a photo of Lake Fork and the point where the Gunnison river empties into it: 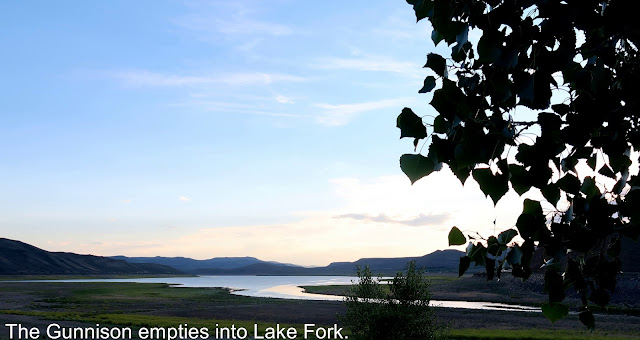 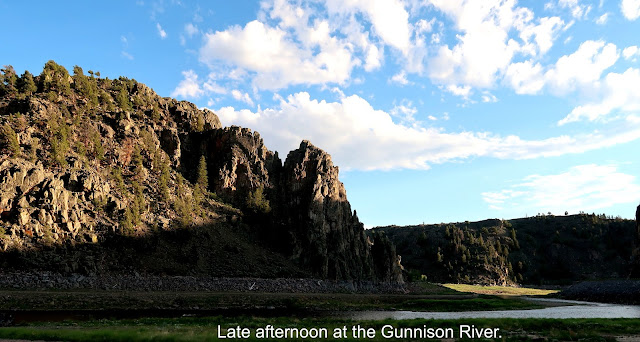 Arriving at Palisades in Gunnison: 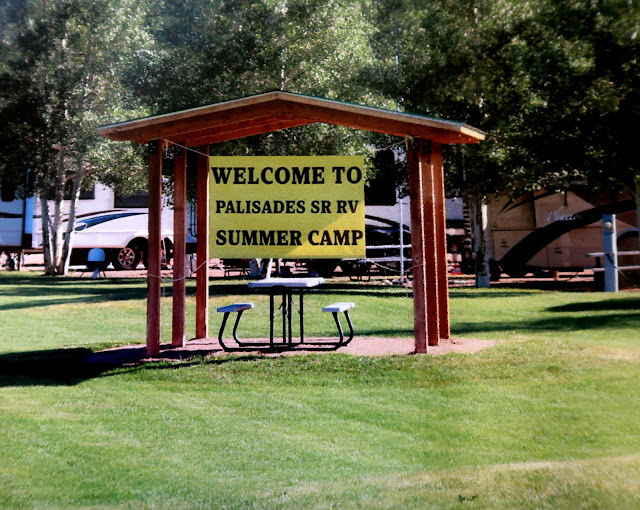 Here is a layout of the park; it's a relatively small park, and most of the residents stay here all summer. There is almost always a waiting list for reservations.

We check in at the office: 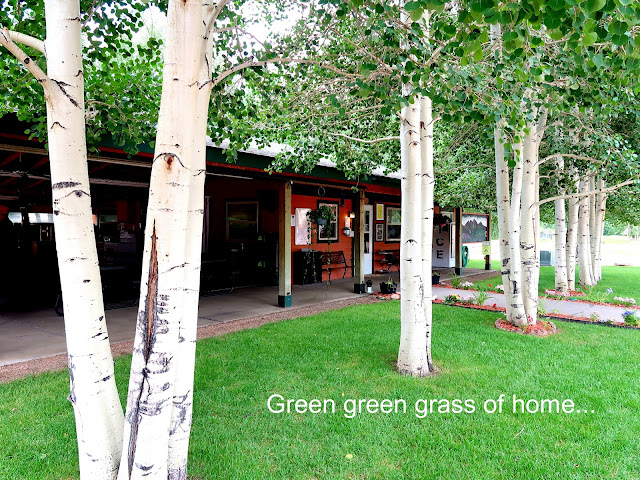 Manager Sherri is at the desk, holding up a chocolate bar (baiting the hook, I'm sure). 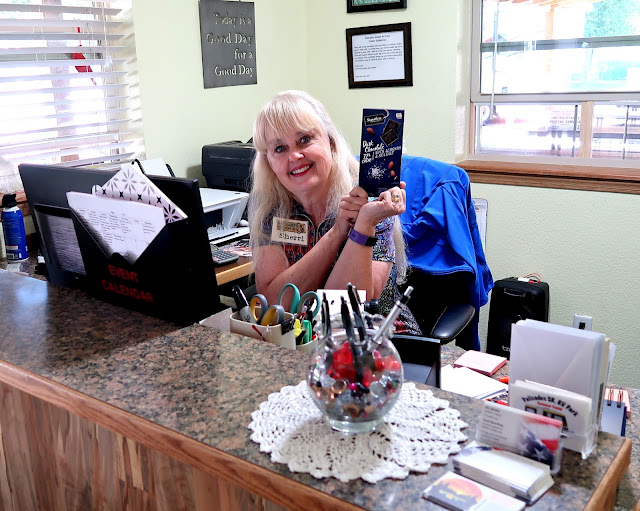 We snuggle in beside two fivers: 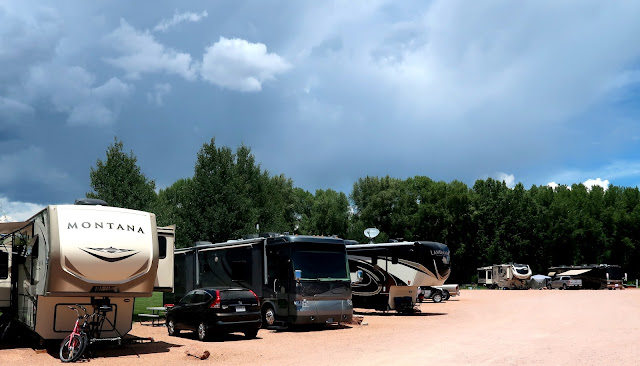 View from the rear of our campsite; note that Starlink is up and running: 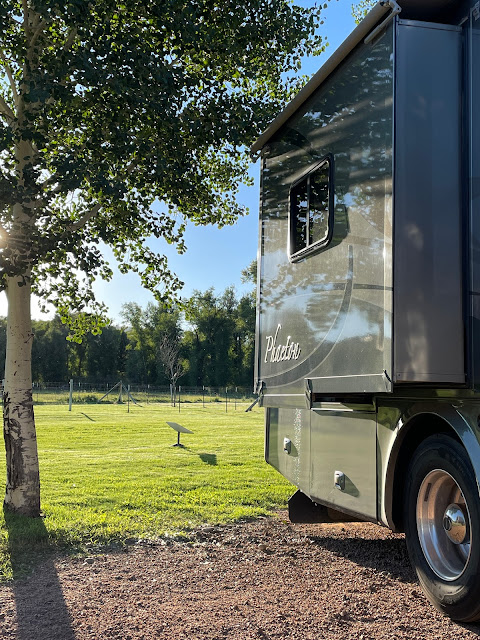 Friendly deer run past our campsite! 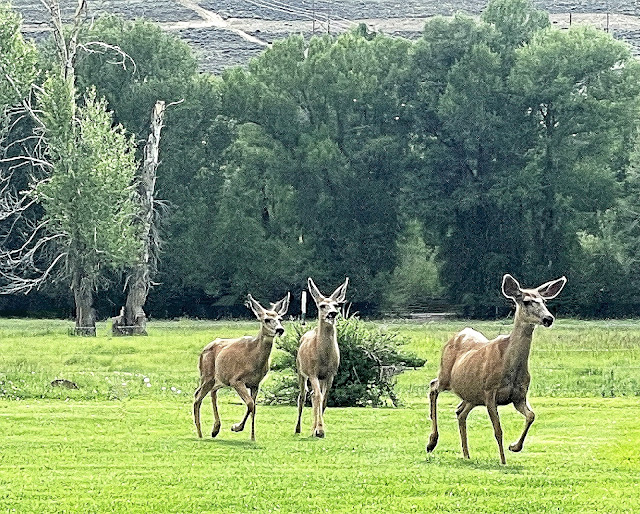 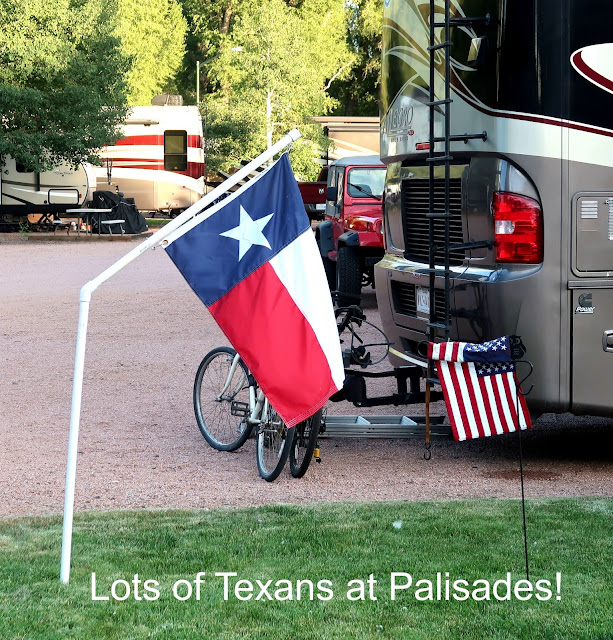 Below is a summer resident's site where his dining table is enclosed in a tent.  We soon found out why--mosquitoes!  We didn't have to contend with these pests at Cortez because of the drier climate and ever-present wind, which is usually calm here in Gunnison. We just make adjustments, however; the park sprays frequently, and we use insect repellent and bug zappers, so there really isn't much of a problem. 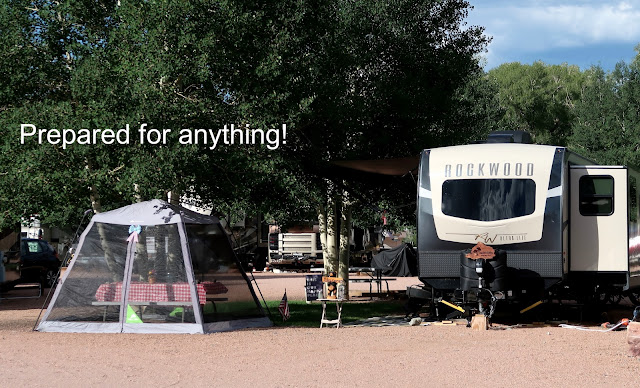 Some of the summer-long residents do a nice job of decorating their sites: 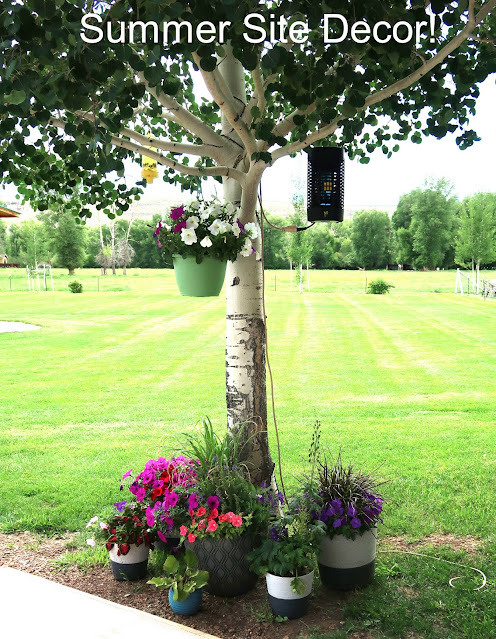 Since we're going to be here for the summer, we have kept an eye out for a small propane grill that will be easy to transport and set up. We spotted one while we were in Cortez, and it looked perfect, especially since we're not "power" users. So we ordered one and, so far, are very happy with it. The legs fold in, and it winds up being no larger than a small suitcase! 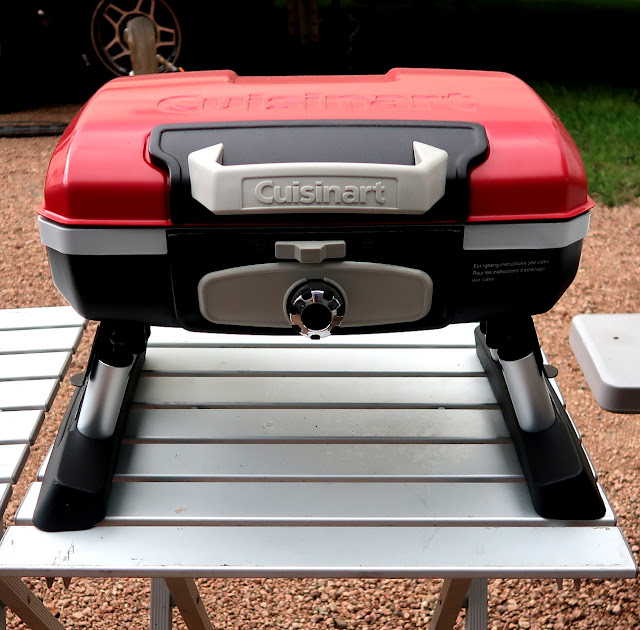 So, to try it out, we had burgers for brunch (we don't really eat breakfast, for reasons that I really don't see any need to divulge): 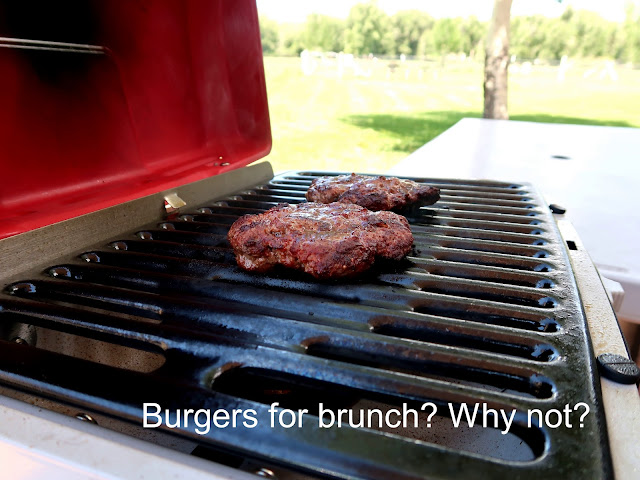 As is common here in the mountains, a rain shower frequently passes through, cooling things down: 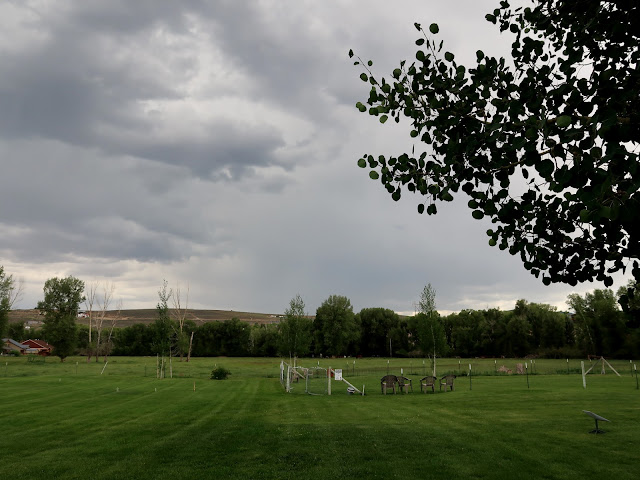 It's almost criminal to show you the temperature as I am writing this during that shower: 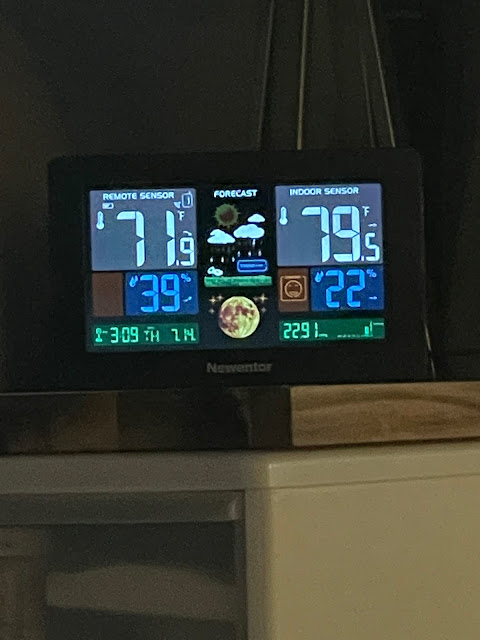 The grounds around the park are very well kept with manicured grass and flowers everywhere: 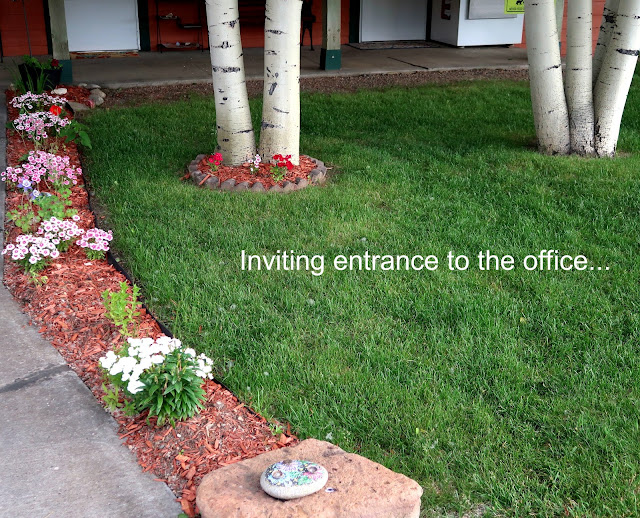 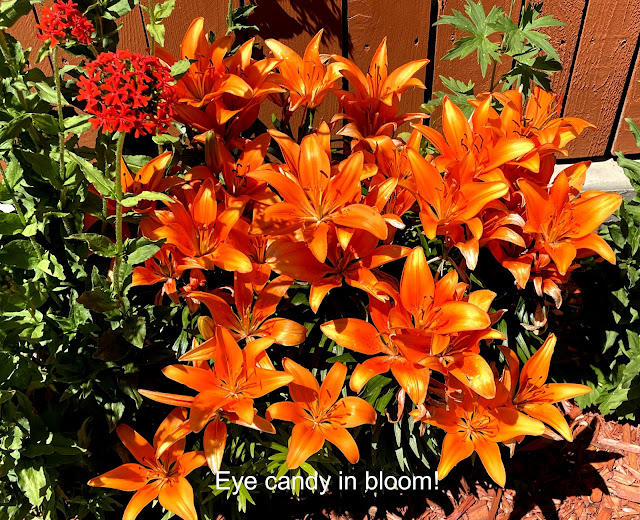 We took an early evening drive around the area to get the lay of the land, and found some handsome photos to share. This first one is overlooking Gunnison from the south. In the mountains in the background lies Crested Butte: 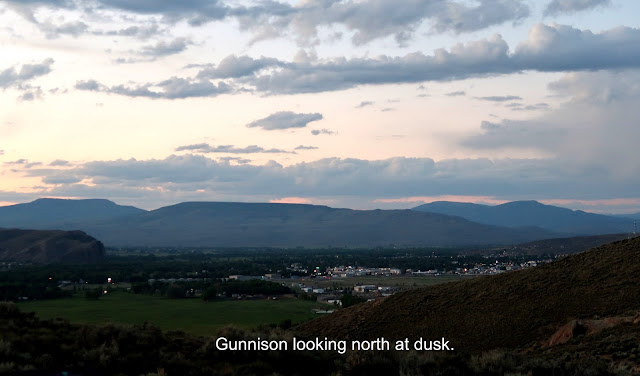 Looking west, we couldn't help but be mesmerized by the mountain sunset: 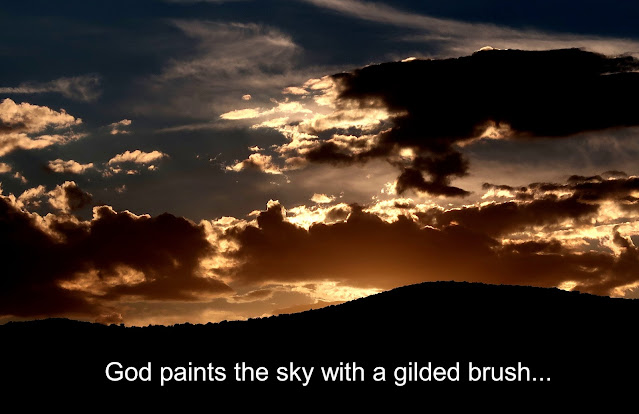 The moon was nearly full this night, so we got this photo that we liked: 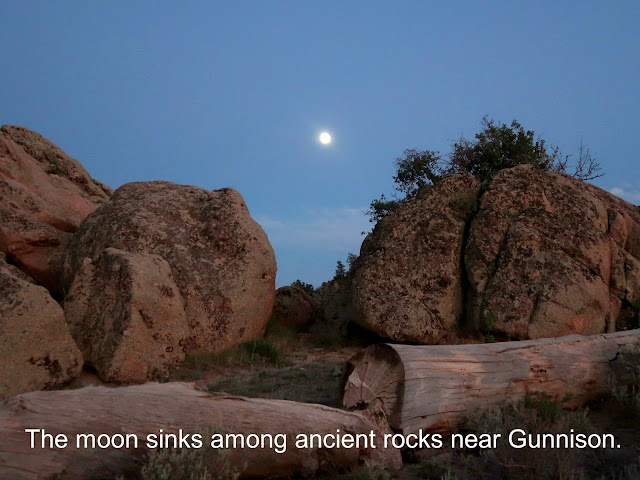 Driving back through town, Gunnison is a little sleepy as the moon looks on: 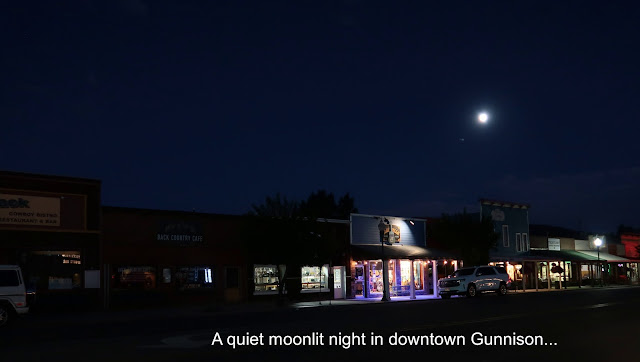 Arriving back at the park, the gazebo is all illuminated, waiting for friends to sit and chat in the cool evening: 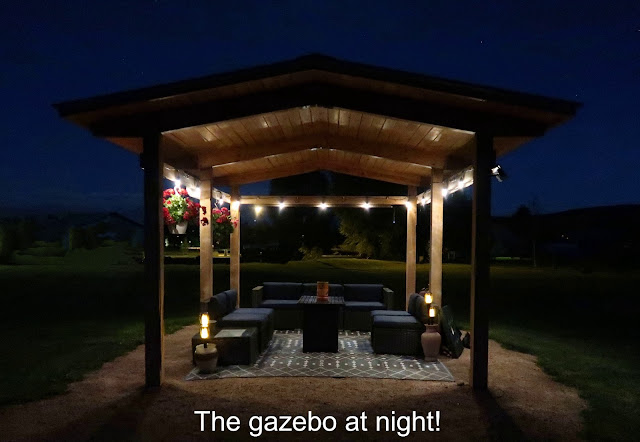 I mentioned earlier that I had a "gig" up here. Well, I will be playing the piano on occasions, in addition to doing some photography, both for which I will be fairly well compensated.  I'll have to include a video of one of these sessions in another post.
Stay well and stay cool, y'all!
Thank you, Lord, for this wonderful life; please forgive me if I don't appreciate it as I should every day.
We don't stop playing because we get old; we get old because we stop playing.
---George Bernard Shaw