Ardmore Millionaires and the "Mexicat Restaurant"

Our Branson trip was fun, as always. It happens to be one of our favorite places because it is one of the few towns left that remind us of our early years when life was simpler and entertainment was just clean fun. It's a place where "going woke" means nothing more than waking up in the morning. It's near beautiful Table Rock Lake in the Ozarks, and we have given serious thought on numerous occasions to actually moving there. But not for now.

Since we're back at Ranchito Hondo, and there hasn't been much to post about lately, I thought I would just post the latest monthly column that I write for a mostly-advertising newspaper in my home town of Nacogdoches, Texas. So here goes:

Growing up in Nacogdoches, I was never far from a source of fried catfish, either from family kitchens or catfish joints around east Texas. It is a favorite, of course, and a craving for this delicacy cannot be satisfied in many of the places we roam. It was when we were approaching Ardmore, Oklahoma, while traveling from Branson back to Texas, that a catfish craving hit me, so I asked Sandy to check on her phone for a catfish joint and, lo and behold, a highly-rated one was listed—Catfish Corner. I made a quick check on Google Earth to see if our huge car-towing bus could be parked nearby and, once again, the gods were smiling; there was a vacant lot next door! (If you ever acquire a large motorhome, this pre-visit visual check will become second nature to you.)

We asked Siri for directions and maneuvered our rig to the restaurant at the corner of Commerce and McCullough in Ardmore: 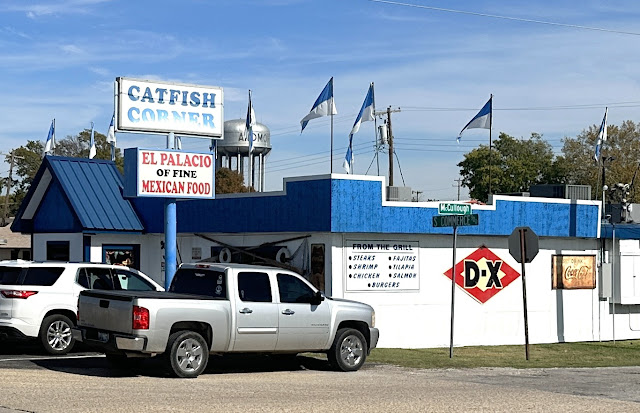 We couldn’t help but notice that beneath the “Catfish Corner” sign was another one that read “El Palacio of Fine Mexican Food.”  I figured there were two separate restaurants in the building, but no—upon entering, it was clear that it was a catfish/Mexican restaurant—a first in all our travels over seven decades of living.

We were met at the door by the owner, John Burkhart, dressed in jeans and a green-checkered shirt, tail out, that appeared to be freshly acquired from Goodwill. He greeted us warmly, as though we were long-lost cousins. I was immediately reminded of the late Sam Shepherd, who was similarly accommodating at his legendary restaurant that was once a Nacogdoches icon. As John showed us to our table, I took note of the food adorning the tables at the packed restaurant and, to my surprise, noticed that most of the patrons were eating Mexican food, which was advertised underneath the catfish signage outside. This piqued my curiosity, of course, but we were all set for catfish, which was every bit as good as it appeared on the platter. 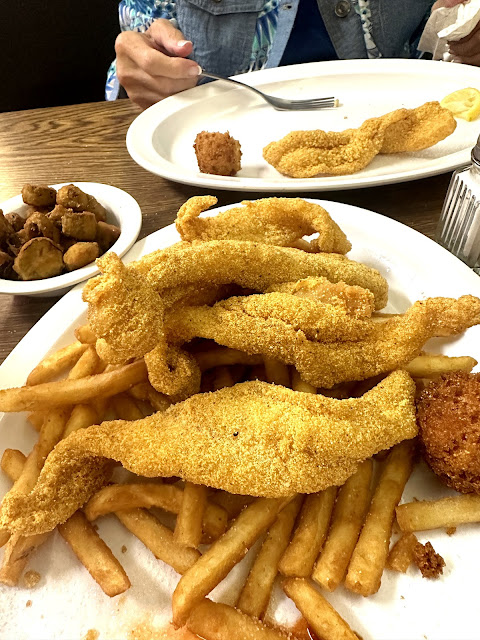 It wasn’t long until John began making his rounds of every table to ask the customers if everything was okay. (Again, I thought of Sam Shepherd.) When he stopped at our table, I had to engage him about the strange two-restaurants-in-one concept. He said the place opened in 1967 as a Mexican restaurant, but he felt there was a need for a good catfish place in Ardmore, so he just made it “twofer.” He said it is now one of the ten best catfish places in Oklahoma, and “there are a lot of ‘em.” Based on the delicious fresh filets we had, I’m pretty sure he was correct.

Then I asked about my observation that most of the diners appeared to be having Mexican food. He said, “Oh, we’re famous for that, too, especially the chile rellenos; I think they’re the best anywhere.” I was tempted to order one for dessert, but there was just no way after gorging on the catfish.

John and I talked again at the front of the restaurant when I was paying the tab. I noticed a photo of a trailer laden with more chile peppers than I had ever seen and asked him about it: 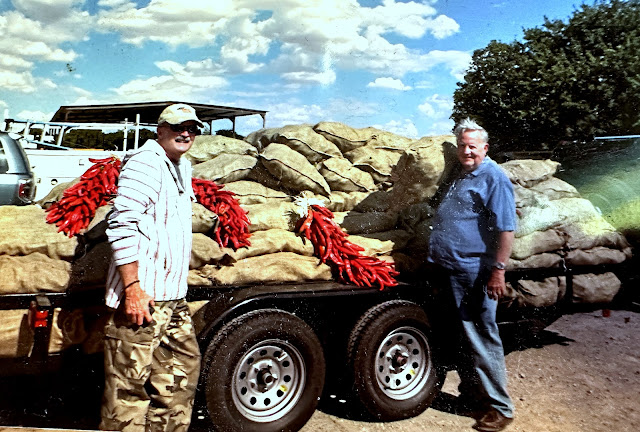 “We go to Hatch, New Mexico every season and load up on these chiles for our rellenos,” said John. “That’s me on the left; this trailer load won’t last us a full year nowadays; looks like we’re going to need a bigger trailer.”

Suitably impressed at the enormity of the haul, I wished even more that I had tried one, but there was just no room. I vowed to come back, however.

As we were about to leave, I asked him a little about Ardmore’s history. He rubbed his chin for a moment and then said, “Did you know that Ardmore once had more millionaires per capita than anywhere else in the country?” I blinked, wishing to know more, but John was swept away, glad-handing another couple who had just walked in the door.

I looked up John’s millionaire claim, by the way, and he was right. After a nearby oil discovery in 1912, a boom quickly developed and, for a while way back then, Ardmore indeed sported more millionaires per capita than anywhere else.

We never know what interesting things we will find on our journeys, but a “Mexicat” restaurant and an Ardmore full of millionaires are a couple of surprises we never expected.

Thank you, Lord, for this wonderful life; please forgive me if I don't appreciate it as I should every day.
We don't stop playing because we get old; we get old because we stop playing.
---George Bernard Shaw