We departed Biloxi and decided to make Panama City, Florida, our next stop. This would be the shortest driving distance of the four-day trek to Palm Coast, and we were looking forward to spending less of the day on the highway. We also decided to take U. S. 90 along the gulf coast instead of I-10, where we had been grinding along every boring mile that looked just like the one before it. I despise driving on the interstates in the East and Midwest because of the mind-numbing sameness of the swaths they cut out of the forests and prairies. There's nothing to see but trees, fields, gas stations, motels and fast food joints. It's enough to drive you insane. That's the worst drawback of having to arrive somewhere at a specific time—driving the interstates. Although I much prefer to take the blue highways, the interstates are where you have to drive in order to make good time and meet a schedule. We were looking forward to the trip back from Palm Coast, as we would have no schedule to meet and could lollygag around to our hearts' content.

The drive along U. S. 90 was an enormous treat after the interstate driving. This highway follows the shoreline of the Gulf of Mexico, and the beaches are white as snow all the way to Panama City. We would have loved to stop and enjoy the beach for a while but, again, there was just no time. At Ft. Walton Beach, we stopped at the Crab Shack Restaurant and were surprised to find it had a wonderful deck overlooking the intercoastal waterway, where we had another good seafood lunch and enjoyed watching the boats go by.

It was at Panama City that we found the most luxurious (and expensive, at over 40 bucks) campground of the trip. The Emerald Beach RV Park was a wondrously landscaped beauty, nestled among palm trees and manicured grass, flowers and shrubs. All the pads were concrete, and we had a nice shady spot into which we had to back Homer. This would be the first time we had to do a back-in, and I was a little nervous, especially when other people are watching. Fortunately, I had purchased a couple of walkie-talkies before the trip, and I quickly put Sandy to work, standing at Homer's rear bumper and making sure that I didn't hit anything during the procedure. The walkie-talkies turned out to be indispensable. We don't even try to maneuver the rig in close places without Sandy, uh, telling me where to go. 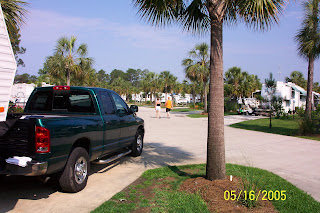 After getting Homer parked, we were hungry again and decided to take a break from seafood. We were both pizza-hungry, so we stopped at a nearby Hungry Howie's. Yes, it's a chain, but we just didn't have time to go hunt down a mom-and-pop pizza joint. We were actually impressed with our medium thin-crust Supreme. The crust was impossibly thin and crispy—just the way we like it—but there was a bit too much sauce, and it was slightly too sweet. Those minor flaws didn't keep us from eating it, however, and it was pretty darn good, overall.

Afterward, we trekked to a nearby Wal-Mart, where we bought some groceries for Homer and a towel rack that hangs over the outside of the bathroom door. Homer didn't have nearly enough towel rack space, and this new rack works fine. We are able to hang wet towels there, and they dry nicely while we travel. Small washcloths, however, need to be secured with a clothespin to avoid falling to the floor.