Mel, our salesman, blinked when we told him a third air conditioner would need to be added to Phannie.  Apparently,  he had not often heard that particular request, but it took only a couple of seconds to respond with, “Sure, we can do that!”  (His ‘customer is always right’ sales training must have been successful.)  And they did; the technicians dropped that puppy right into one of the roof openings formerly occupied by a vent fan and voila!  The need for a refrigerator in Phannie is now questionable!


Why a third air conditioner?  One word:  Texas.  As much as I love my state, I hate her summers.  There is no escape from the Hades-like heat.  We are virtual prisoners from June through September, hopelessly confined to whatever air conditioned space we can find.  We’re so looking forward to retirement, when we can simply escape in June and go north until October or November.


I suppose we could get a break somewhere out in the Davis Mountains in west Texas, but I don’t think even they are high enough to make much difference.  We have survived by air conditioning everything—perhaps even over-air conditioning.  Our SUV has a/c in the front and in the rear; our smallish house has six tons of air conditioning.  But when we crank the thermostat down to a daytime temperature of 73 degrees, where we’re comfortable, we expect 73 degrees and we expect it relatively quickly.  Such was not the case with Phannie (or with Homer, for that matter).  On the hottest days where there was no shade, the two a/c units would struggle, and we found that to be the case with virtually every large coach we’ve seen with only two air conditioners.


So, dropping in an extra unit was a no-brainer, and the problem is forever solved.  Furthermore, if one of the units happens to fail, we can still be relatively comfortable with the other two.


Now, before you classify us as energy hogs, you should know that we spent quite a bit extra for foam insulation, double-pane windows and energy-efficient appliances when we built the house.  As a result, our energy cost is incredibly low—sometimes less than our water/sewer bill!  With this in mind, we don’t apologize for having a cool Phannie!  (Grin)

The new a/c is toward the bottom of the photo. 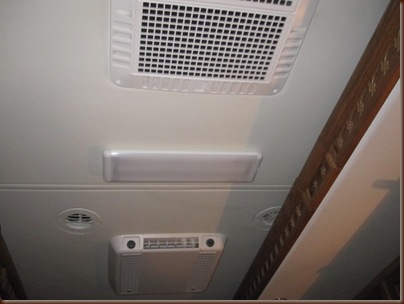