Rewind: As promised, a review of Coyote Bluff Cafe in Amarillo:

This is a true dive in every sense of the word, and that’s why I like it! It’s a tiny burger joint in a rundown former house on South Grand Street. But it is incredibly popular; patrons must go inside, put their name on a list and then go back outside in the parking lot to wait for a table--rain or shine, cold or hot; it doesn't matter. There's no room to wait inside. 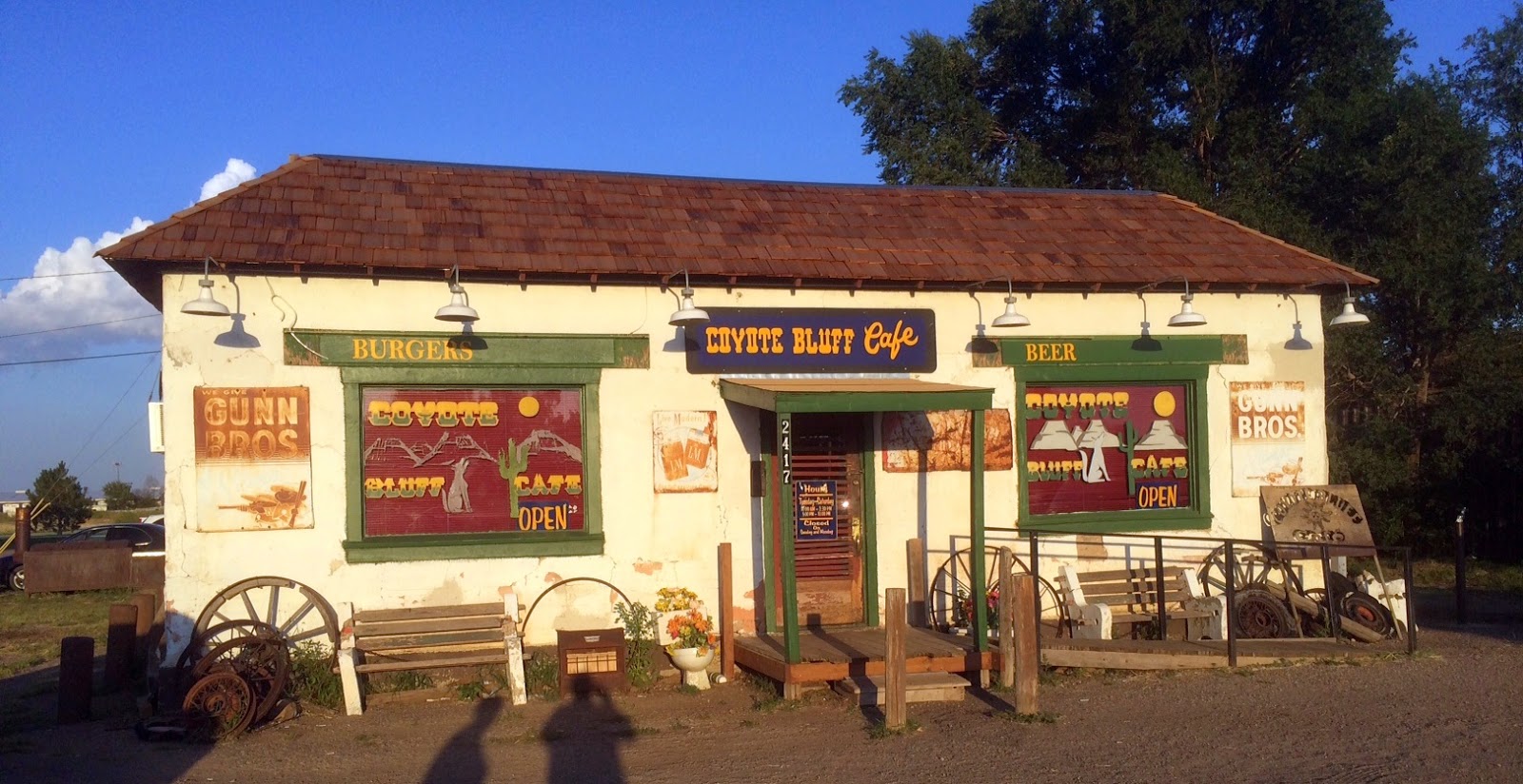 The place is literally a dump; the owners apparently see no need to perform repairs that are sorely needed, like the front porch, for example. The floor boards there are nearly rotted out and will probably cause an injury at some point. (I hope their liability insurance is paid up.) Yet oddly, the more dilapidated the place becomes, the more charm it seems to have. Go figure.

The burgers are huge and come in about a half dozen varieties.  The green chile cheeseburger is a thing of beauty and my favorite, even though I’ve had only one other version, the Old Fashioned. That green chile cheeseburger will always be my favorite because it was my first love when I had it here before. I ordered it with bacon too, in spite of my fear it might hasten my trip to the Great Beyond. Then I remembered my Lipitor prescription, and I felt better about it. The Hellburger also caught my eye, based on its promise of being wickedly spicy, but I don’t know if a Baptist is supposed eat a Hellburger, so I didn’t order it.

So what silly thing did I do this time at Coyote Bluff?  I ordered a steak, for reasons that are not entirely clear. I shouldn’t have; it was too thin, too done and had a peculiar whang (Texan for odd taste) that I didn’t like.  I won’t make that mistake again; the place is a BURGER joint, Mike!

The next day, our leg from Amarillo to Raton, New Mexico was uneventful, and we loved seeing again the great vistas and clear skies on the high plains, punctuated eventually by the appearance of distant mountains as we approached New Mexico.

I try to limit our en route legs to 250 miles or less each day to allow us to just mosey along, taking time to stop if we wish and see stuff that interests us.  With all the conveniences of home right there in the coach with us, it’s sort of like taking a road trip in our living room. Because of Phannie’s roominess, together with our ability to move around, access food and drink, and relax in the plush cockpit recliners, we really don’t get tired on a long drive like we do in a pickup or automobile. Since I obviously can't get up and move around when I'm driving, Sandy does most of the steppin' and fetchin'.  That's women's work, after all, isn't it?  (Please, God, let this be a post she doesn't read.)

Sandy quickly slips into slumber soon after she reclines her cockpit chair and raises the power footrest. She will tell you that life is good in Phannie once I have been dealt with!

A surprise for us was our ability to have access to cell phone signals on this trip, even in some very remote parts of the Texas panhandle. We never lost a signal anywhere in Texas until we reached Raton (it figures). We know we have become way too addicted to the technology, but we must face the fact that we have become data junkies. Much of the time en route is spent calling, texting or on the web. It is a wonderful convenience and source of information, as well as helping pass the time (especially with social media); I'm not sure how we got along without it.

Now some readers will be shaking their heads at this, because for them, a vacation is not a vacation until they jettison all of the bondage of technology, preferring to rejuvenate themselves in peace and quiet without peering into a silly small screen much of the time. For others (like Sandy and yes, yours truly), you may as well cut out their tongues or cut off their fingers. A vacation unconnected would be pretty much unbearable for these folks.

Now, let's talk about Raton.  This little burg is nestled at the bottom of Raton Pass in the northeast corner of New Mexico. We stayed at the Raton KOA, which is a pretty tired-looking place with gravel sites, and it was too expensive for my liking. But they were friendly toward us, and that counts for something, I guess. 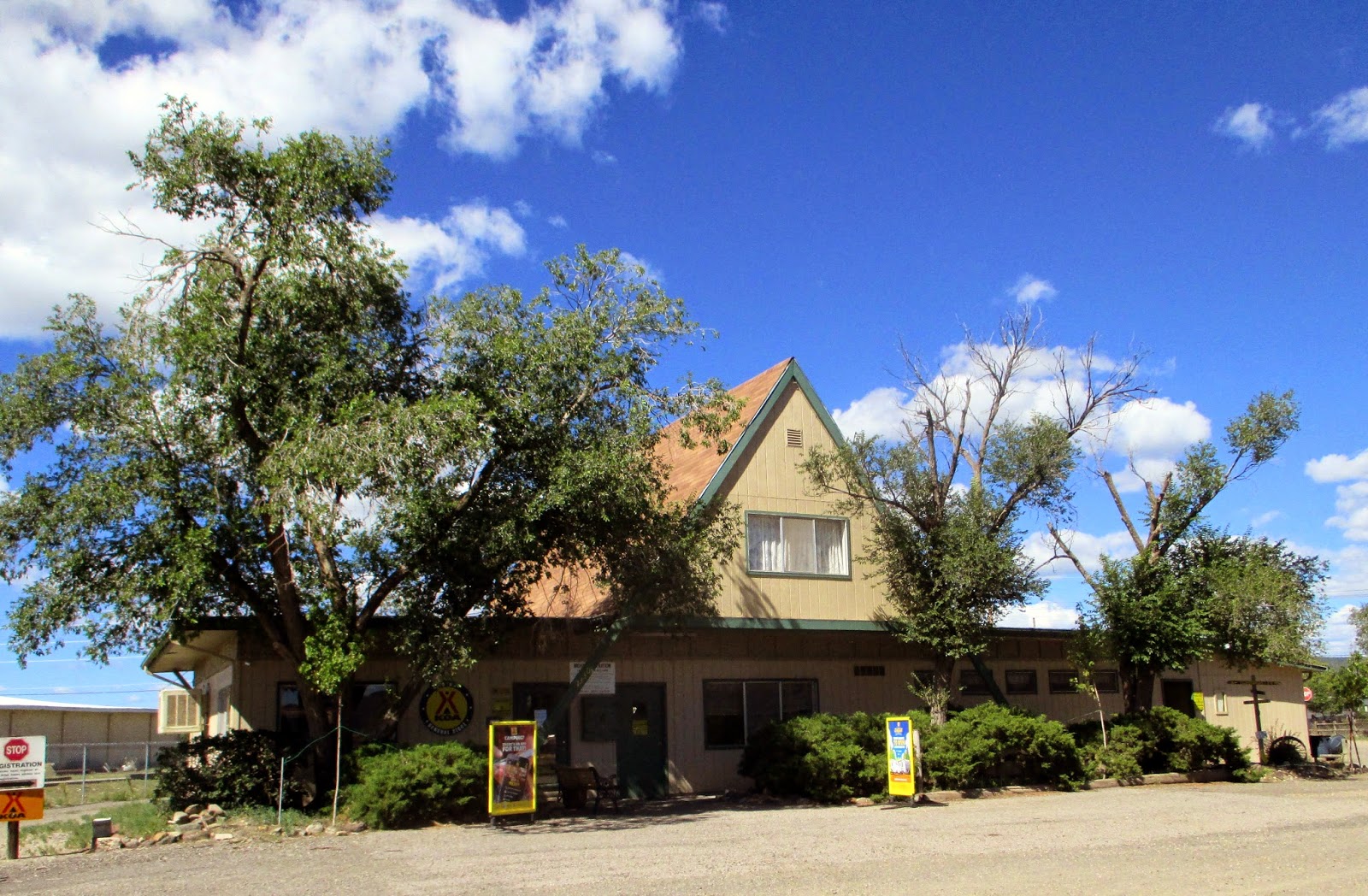 Note the deep blue of the sky in the photos above and below. We don't get to see that in the hazy metropolitan area where we live, and that's among the things I love about traveling in the West.

I would like to say something positive about Raton, but the town is pretty sleepy and may have seen better days.  There doesn't seem to be much here to support the place other than the gas stations and convenience stores that populate the intersection of I-25 and U. S. 84. There are many closed businesses, unfortunately. Even KFC couldn't make it here, and there is no Wal-Mart. The size of the downtown area is such that one would think these businesses would thrive.  Maybe they need to change the town's Spanish name to something other what it means in English.


We at dinner at El Matador, a painfully nondescript little Mexican eatery on Second Street.

A curiosity is the large "restaurant" sign on the front of the building in some kind of Hellenic font that would be appropriate for a German restaurant. I don't know why I notice these things, but that helped convince me I needed to eat here.

We had tacos and enchiladas lathered in some of the best red and green New Mexico chile sauce I have ever eaten. (I am a sucker for New Mexican chiles.) We had breakfast burritos stuffed with egg, pan sausage and green chile strips, swimming in the aforementioned sauce. It was ridiculously good.

By the way, someone asked why I'm doing so many restaurant reviews lately. Well, when we are overnighting in different towns when en route somewhere, we generally eat out--not having time to do much else--and that usually presents an opportunity to offer some commentary that could possibly be useful to readers…or not.  It doesn't really matter; I blog about what's interesting to me. Hopefully, it is occasionally interesting to others.


Colorado Springs is next; stay tuned!