Healthcare Concerns as Fulltimers; A Lighting Project and a Favorite Recipe

At The Vineyards Campground, Grapevine, Texas...

We had to take a short trip back to the DFW area for a doctor visit. We really like the Vineyards RV park, which is probably one of the nicest in the state. It is owned by the city of Grapevine, and it is hardly typical of municipal RV parks in general. First of all, it rests on a large lakefront property whose value is probably incalculable, given its location in the middle of the DFW Metroplex. Secondly, it is a first class development with hard surfaced roads and sites, many of which front on Lake Grapevine itself. Thirdly, the city fathers--fully aware of its attractiveness to RVers--exact a steep price from its users. Unlike most municipal parks, you don't get to stay here at a loss to the city so RVers will go into town and spend money. Instead, you dole out plenty of moolah for your site, and then you still go into the quaint town and spend more. As you can imagine, there's plenty to do in the area, and the park is almost always full. The price? Think around $50 per night or between $1100 and $1800 a month, depending on the site you choose. Normally, this would be a little pricey for us, but the park is very close to our doctors' offices. We only stay a few days at these prices.

The Vineyards suffered devastating damage from a 100-year flood a couple of years ago. Every single site in the park was flooded, some covered by more than 20 feet of water. It took a long time to rebuild, but they have done a superb job of bringing it back.

Here's our site right on the shore of Lake Grapevine: 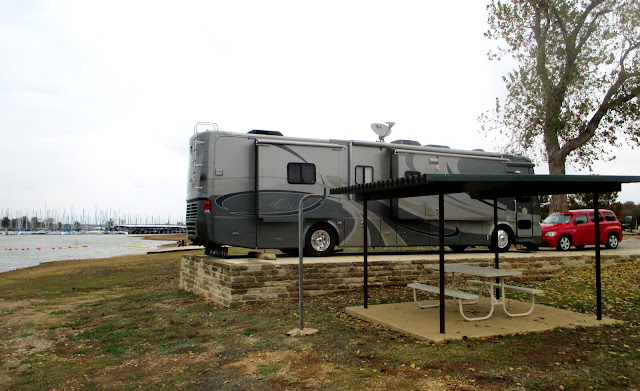 If you've read this rag for a while, you might think that we are hypochondriacs, judging by how often we visit doctors and dentists. Well, we are not fortunate enough to have escaped medical problems as have a number of our disgustingly healthy friends. We both have some fake joints and other conditions that need medication and monitoring from time to time. Fortunately, these are controllable, and they don't cause us any physical limitations at the moment. I also have the good fortune to be married to Sandy, who watches me like an owl who has spotted a fat field mouse. If I so much as hiccup, she will drag me to the doctor.

Now, being less than fond of visits to the doctor or dentist, I usually protest vigorously, so we compromise and I do what I'm told. My initial pushback is usually more symbolic than real; I already know how it will end when she gives me "the look." However, I have learned to trust Sandy's instinct without making too much noise, as I am positive that her prodding very likely saved me from colon cancer some 30 years ago.

As relatively new fulltimers, we are still working through healthcare concerns that we likely share with others of our ilk. We had established great relationships with and confidence in our local doctors and dentists over decades here in the DFW area, and we haven't yet found all the new ones we'll need at The Woodlands near Houston, where the kids and grandkids are and where we will likely be spending most of our downtime. We're getting there, however, having found a dentist and ob-gyn who will fill the bill, but we have more healthcare providers whom we have to test-drive, if you will.

I read in my friend Richard's blog that he recently upgraded the bulbs in the light underneath microwave in his motorhome. That got me to thinking that we have the same problem with too-dim lighting above our kitchen range, so I decided to do him one better and install some extra lights, which I did all by myself, and nothing blew up, and no one was electrocuted. Amazing!

Here's the pitiful little light we had: 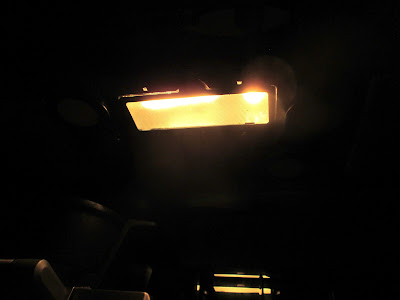 So, I picked up this three-light LED kit from Home Depot: 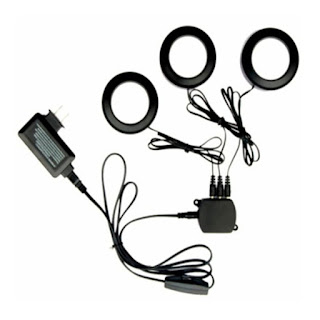 A quick install underneath the microwave: 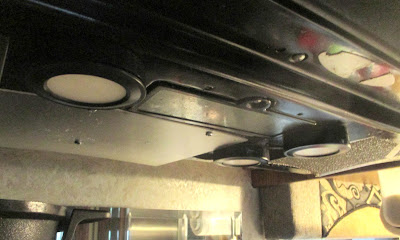 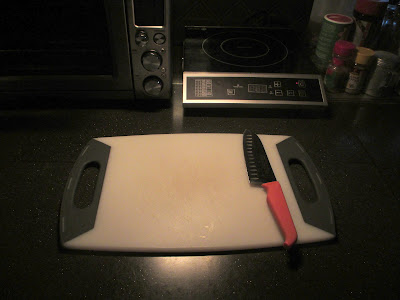 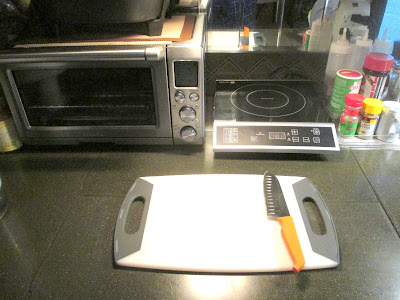 I really didn't realize how much this little upgrade was needed; but now we might be able to follow recipes a little better!

Speaking of recipes, I recently made a batch of my favorite spicy tuna salad: 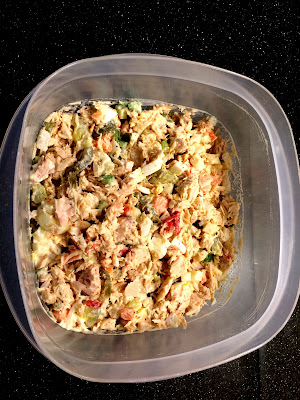 Now if you're like us and are a fan of tuna salad, and you also like spicy food, as we do, this one is for you. But be warned: It is not for sissies; there are no fewer than six kinds of spicy peppers and seasonings in this concoction! You can, of course, modify the recipe to your level of tolerance but, if you are fearless, you'll make it like in the recipe below. And while we're talking about tuna, please don't buy some cheap canned tuna like Star Kist or worse, some store brand. You may need to go to an upscale store to buy solid pack albacore tuna cooked in its own juices or do like we do and order it from a private cannery in Oregon like Sportsmen's or Chuck's. The difference is not to be believed. In fact, when we were in Oregon two summers ago, we made a point to visit Chuck's store and pick up a case of the good stuff. It's easy to order online too, and you won't be sorry. And yes, it's a little pricey, but aren't you worth it? I think so.

Mike's Hotter than the Hinges of Hell Tuna Salad

1. Break up the chunk tuna in a bowl and then mix in all the remaining ingredients. Don't overmix; you don't want it to get mushy.

Notes:  Mama Lil's Goathorn Peppers:  These are spicy and slightly tart Hungarian peppers in oil, hand packed in Oregon, and I use them in many dishes to add a unique flavor. They're also good in Italian antipasto. Easily obtained by mailorder. 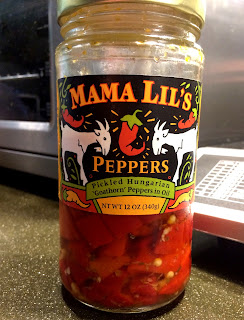 Yes, I know--all the expensive specialty products just for a tuna salad? Well, yes! It's just not the same without them, and it's not like you can't use them in other dishes, right? While we're at it, let's talk about the Los Chileros Christmas Salsa Mix. This can be ordered from Los Chileros in New Mexico where they have lots of great New Mexican seasonings. I use it in fresh salsa, breakfast burritos, juevos rancheros and anything else that's spicy. It's good stuff.

By the way, we usually don't make sandwiches out of this tuna. We eat it with crackers, but not just any crackers-- 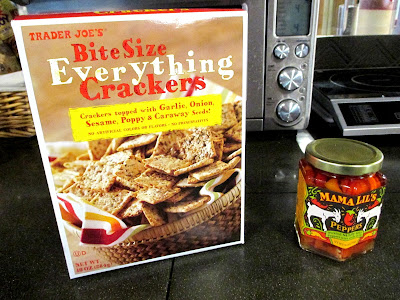 Yes, this is our favorite cracker--Trader Joe's Everything Crackers. If we should ever run out of these, a call to 911 is in order.

Obviously, you can adjust the recipe as desired, but you should know that Sandy can eat this with no problem. It hasn't always been so, however. Living with a spicy food nut like me for 40 years, she has had to make some major adjustments to her palate. When we were dating, I remember well her timidly dipping the corner of a tostada in a tiny bit of mild salsa and then shaking off the excess, lest she might taste a little heat.