After enjoying visits with friends and family in central Texas, we slipped into Burnet, Texas to attend the tail end of a rally of the Texas Bluebonnet Allegro Club, of which we are members. During these visits, we found a couple of restaurants that had to be added to our "best" list: The Best Quality Meats and Sausage Shop in Temple and Spykes BBQ in Kingsland. Not much to look at, but trust me...

From there, we motored down to our sort-of home park, Sunset Shores on Lake Conroe, where we tucked Phannie into a nice shady spot that only catches a few warm rays near sundown: 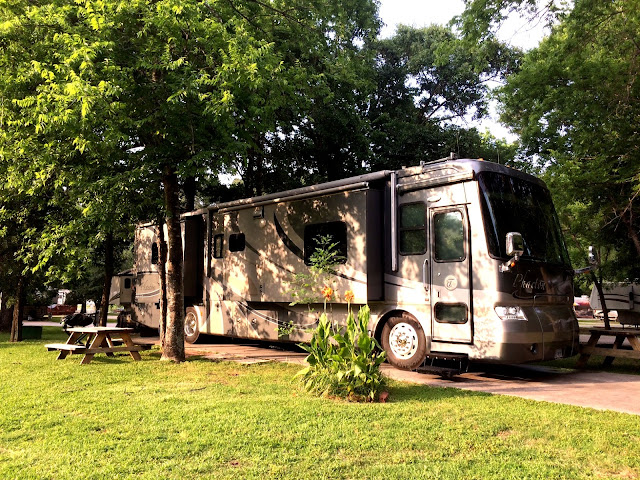 We got an enthusiastic welcome from the kids, especially the grandsons Mason and Pryce, who are willing beneficiaries of all the schemes we dream up to spoil them! Who knew you could have so much fun with grandkids? Why, we've developed ways to spoil them even when we're not here. They love to get surprises in the mail so, when we're traveling, we collect a few small things we think they'll like and send them a package every week or so.  Mindy is always thoughtful to send a video of their excitedly opening the packages, so it's almost like being there!  Thank you, sweetie, for being so considerate.

The rest of this post will probably be more meaningful to my pilot friends but, hopefully, others will find some interest in it. Several posts ago, I talked about having re-established my currency as a pilot after a 20-year absence from the cockpit and what fun it was to take the grandsons flying.  Now it was already time to fly again, so that was among the first things on my to-do list now that we're here. (The FAA requires pilots to maintain their currency by making at least three takeoffs and landings every 90 days if they are to carry passengers.) So this time, I thought it should be Sandy's turn to go along, as she remained behind during the first flights so the kids could all have a ride. I decided to take a short flight to Nacogdoches, my home town, to have dinner with John and Pat Sharp. John is perhaps my oldest friend, and we were best men at each other's wedding. It would be good to see these two again. 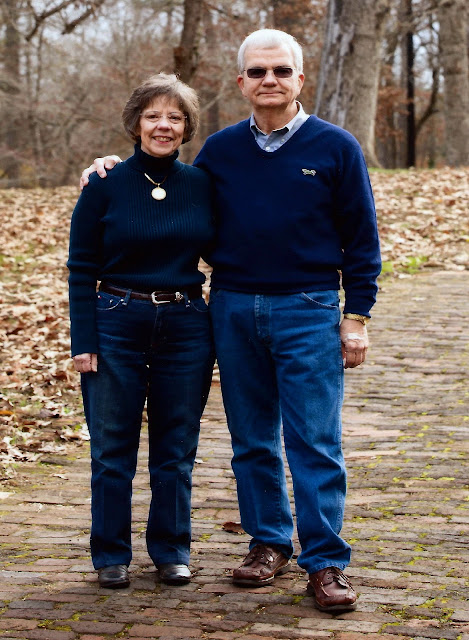 There was also the nostalgia of returning to the airport where I learned to fly 54 years ago and where I hadn't landed an airplane since 1973.

Isn't it funny how advancing age causes us to seek out the venues of our youth to relive the memories? In this case, my memories are good ones, but that's not always why we find ourselves going back, is it?  Soldiers often return to battlefields, for example, where the memories may be terrible ones. I think we do this partly for fun and partly as a means to affirm that all of our lifelong experiences--good or bad--have contributed to a life well lived and to seek some satisfaction that we may not have contributed all we did for others had we not had those experiences.

Okay, I digress; enough with the amateur psychology.

I felt even more at home in the little Cessna this time as we climbed into smooth air above some scattered clouds. What was taking some getting used to was the maddeningly slow speed of the airplane. It was chugging along at an agonizing 110 knots, about one-fourth the speed of the jets I had been flying. I had to keep telling myself: "That was then; this is now. You're retired, and there's no need to hurry; just enjoy yourself."

I also missed the autopilot which, in a modern jet, is a technological wonder. It flies the airplane much more precisely than a human can, so airline pilots go ahead and let it do just that most of the time. But then, hand flying this little airplane was sort of cool; it actually felt good returning to the basics, where one feels the immediate effect of a wind gust or a thermal pushing the little craft slightly out of its intended trajectory, followed by corrective control inputs from me. You should know this is much different from large aircraft that, because of their weight, speed and control input dampers, generally give a much more stable and comfortable ride for skittish passengers. In the little Cessna, I was really flying again, about as close to being a bird as man gets. Yes, I had come full circle.

According to ForeFlight, the air navigation app on my iPad, we had a 26-knot tailwind, so the flight turned out to be a really short one. It wasn't long until I was turning final approach to runway 18: 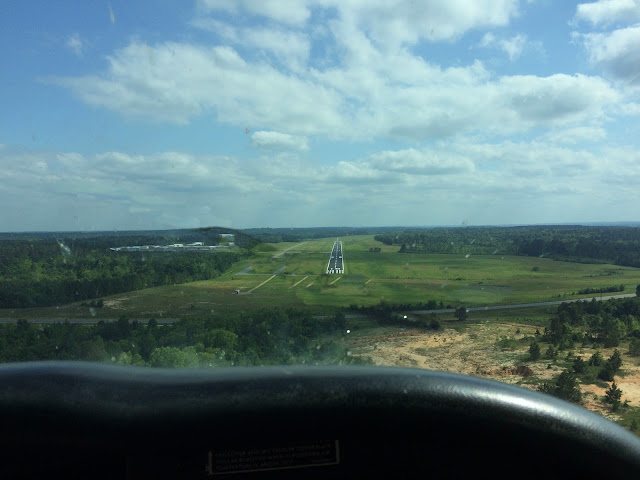 There was a gusty southeast surface wind, so the landing wasn't great, but serviceable. During the flight, I had been a little worried about Sandy, who hadn't done much flying in small airplanes in bumpy air, but she did fine--indeed, fine enough to take these photos. 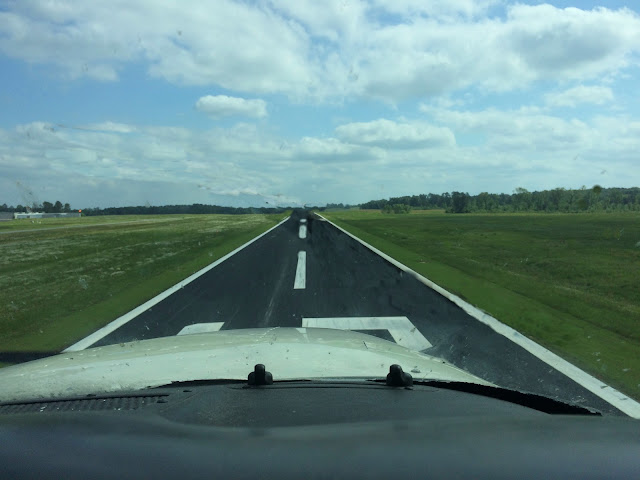 Touchdown was just beyond the numbers above, for the first time in 44 years at my hometown airport! 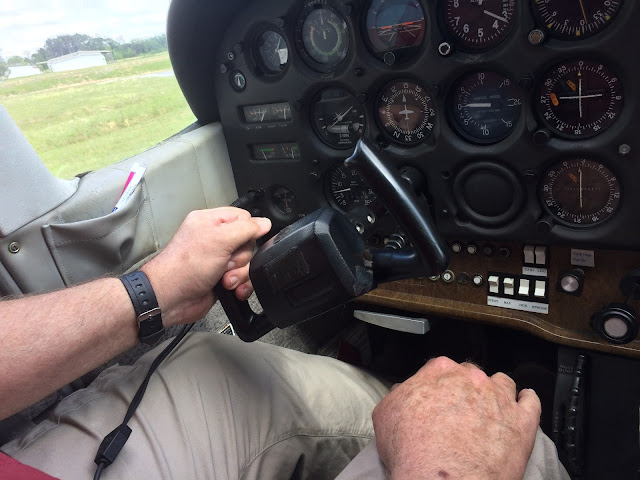 Rolling out after touchdown--still holding the yoke into the left crosswind. 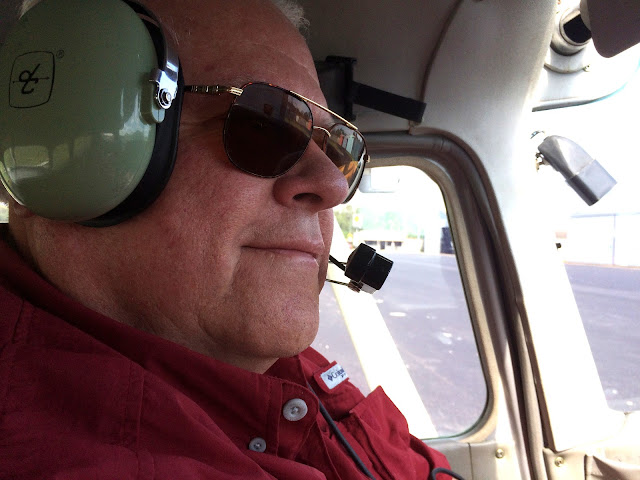 The photo above was taken upon engine shutdown at the ramp. I didn't know Sandy was going to take it, but the smile seems to say it all, doesn't it?  The caption for this might be something my friend Ed always says, "Life is good."

After a fine dinner and plenty of conversation, we bade goodbye to John and Pat and hopped back in the airplane for a little longer flight back to Huntsville. The same wind that sped us up earlier now slowed us down for the return trip. However, we enjoyed the flight--this time beneath the clouds, so I could point out to Sandy familiar landmarks around my ancestral homeland. I was quite captivated by the air navigation software on my iPad that has done away with the need for the paper charts we always had to carry and continuously fold and unfold. It also made the old VOR and ADF receivers--in use for decades--seem ancient by comparison: 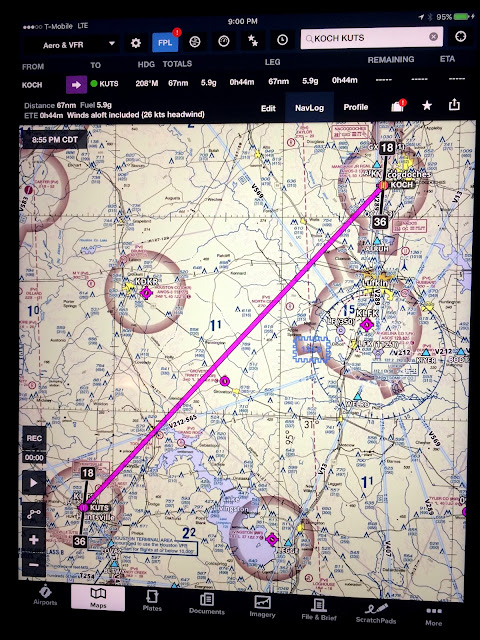 This photo of the iPad display was taken well after we landed, so the information about the airplane performance doesn't appear. If we had been airborne when the photo was taken, you would see a light blue pictograph of an airplane superimposed on the map--hopefully on or near the magenta line that indicates the planned route of flight. Of course, there are very sophisticated digital flight navigation and performance systems using GPS that can be professionally installed on airplanes if you have some rather serious cash to buy them. If you don't, this is the next best thing, for merely the cost of an iPad and a small annual fee to ForeFlight. I confess still to be fascinated with the breathtaking difference technology has brought to flying since I was in the cockpit.

Okay, that's enough with the flying thing for now, but we'll go aloft again in a few days, as the grandsons will be clamoring for another ride. I hope you non-aviators weren't too bored with this.

We will be parked here on the shore of Lake Conroe for about ten more days, then heading to Port Aransas for another rally. Thanks for reading and stay tuned!