TV From the Cloud - We Catch the Wave

Before I get started on the techie stuff, I wanted to show you a photo that I really should have included in the previous post about flying. The problem is that I hadn't discovered it when I wrote that piece. I ran across it while going through some old stuff in our nearby storage unit, and I thought I would just include it here for posterity. It shows me in the right seat of a DC-8-73 in Portland, Oregon as I was checking out as a new first officer. This would have been in the summer of 1985. (Yes, my hair wasn't always gray.) 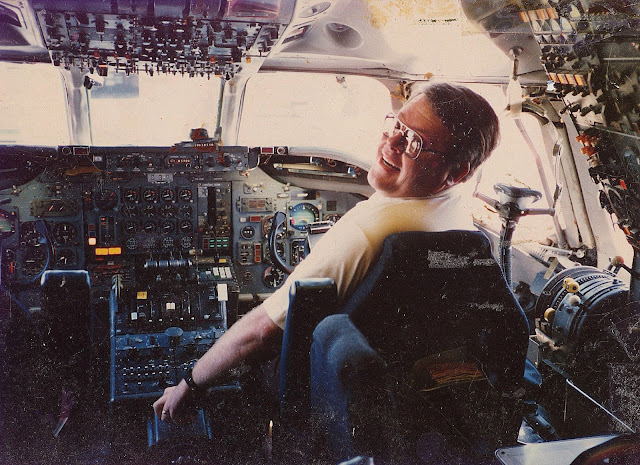 For some reason, I have very few photos taken in or around the airplanes I flew, an omission for which I often kick myself; I hope to find some more as I weed through thousands of family photos, something I should have begun way sooner.

I loved flying the practically indestructible DC-8 (a quality I proved during my first few landings), and it is among quite a few airplanes I've flown that are now largely extinct, like the Lockheed Constellation, the DC-3 and the Boeing 727. Actually, I wouldn't take anything for having flown the old birds back then, when you really had to fly the airplanes rather than mostly monitor computers as we do today.

One should not infer, however, that I don't appreciate modern airplanes and the virtues of cockpit automation. As in many other applications, the technological advances in airplanes have reduced pilot workload and human errors very significantly--so much so that the need for a flight engineer has been eliminated in modern airliners. Anything that has contributed so greatly to flying safety has my respect, for sure.

Okay, thank you for your indulgence; I'll move on to today's subject--TV from the cloud!

When we started RVing more than a decade ago, we knew that we were not going to be roughing it. We both enjoy modern conveniences too much to do anything that could be called "camping." This undoubtedly brings a sneer from those who truly enjoy the call of the wild, feeling the mud between their toes, the rain on their tent and the mosquito whelps on their extremities. We don't care if we are scorned for not being frontier types; that's not us and it never will be: Just give us 50 amps and full hookups, and no one gets hurt!

With this in mind, it should come as no surprise that we have equipped Phannie with all of the state-of-the-art comforts we would have in a stick-and-brick house, like a king size bed, residential refrigerator, extra air conditioning, satellite TV and radio, computers and unlimited wi-fi.

So, let's talk about the TV thing. For years, we have subscribed to Direct TV, the signal to which is provided by a Winegard Trav'ler automatic HD dish affixed to Phannie's roof. It has given great service, and we've been very happy with it. When we park the rig we merely push one button, and the dish goes to work finding its satellites completely on its own. This is really appreciated after having dealt with the frustrations of trying to aim a carry-out dish for a short while.

However, having taken note of the movement of TV broadcasting away from towers and cable and toward the Internet, we installed Apple TV in our stick-and-brick house. We really came to appreciate it because of the vastness of the offerings it enabled from the Cloud. We hadn't considered it for Phannie because of what has heretofore been the high cost of big data plans from the cell phone providers--until now, that is.

It seems that when T-Mobile came up with its "unlimited" data plan recently, the dominoes began to fall, and all the major networks are now offering such plans at a reasonable cost. I scurried to the store and picked up an Apple TV for one of Phannie's sets and a Roku for the other. (The Roku was a good deal cheaper than the Apple.) 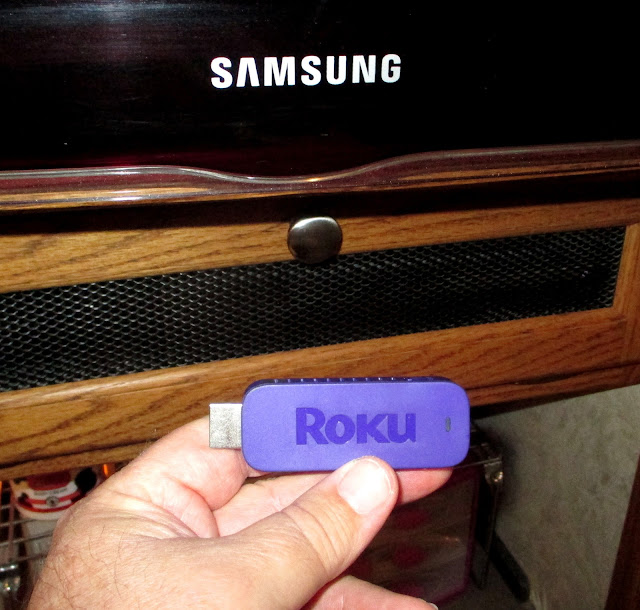 Installing the Roku was a snap--you just plug it into one of the TV's HDMI ports and the power cable to a nearby USB port, and you're done. The Apple TV set required some wires to be run and hidden, but that wasn't a big deal. Roku also offers an Apple-like control box available at extra cost.


The two systems are easy to operate, but the Apple remote took a little getting used to due to its use of a touchpad; we had to learn to use swipe gestures to move things around the screen. The Apple is clearly a well-designed product and elegant in its appearance, as are all things Apple. But the Roku remote is quite functional and required no learning curve.  Here's what the home screens look like:

Unfortunately, the cost of such robust access to the Internet, cloud TV and satellite programming is not small change, and those who need to budget closely may question an outlay of several hundred bucks a month while they're "camping."  Well, we aren't camping; we're living as we wish, and we aren't really big spenders on other things. To each his own, I guess.

Okay, that's about it on all the gadgetry. We're headed to Port Aransas this week to another Tiffin owners' rally; that'll undoubtedly result in another post.

By the way, with summer approaching, you may need to replace some of your folding chairs. As far as I know, the 15% discount from www.strongbackchair.com is still available if you order with the code 'phannieandmae15.' (I don't get a kickback; I just like their products.)

Thanks for visiting the blog today!

Thank you, Lord, for this wonderful life; please forgive me if I don't appreciate it enough each day.
Posted by Mike Mills at 1:58:00 PM