After the ridiculous cold spell in the Houston area, it felt good to fire up Phannie and head over to Marble Falls for the January rally of our Tiffin owners' club.  On the way, we stopped for a couple of nights at La Hacienda RV Resort in Austin to visit with fulltimer friends Steve and Jackie, who would accompany us later to Marble
Falls in their Phaeton.

Not wishing to pass up an opportunity to try new restaurants, Steve and Jackie took us to a couple of their favorites, and they quickly became favorites of ours, too! Now for those who get tired of reading about our constant foodie exploits, I say with the utmost affection: This is something you probably need to get over. Everybody has to eat, so why not talk about places that are interesting and exceptional? You may want to try them yourselves some day, right? And, by the way, these will be included in our favorites restaurant list linked over there in the right margin. 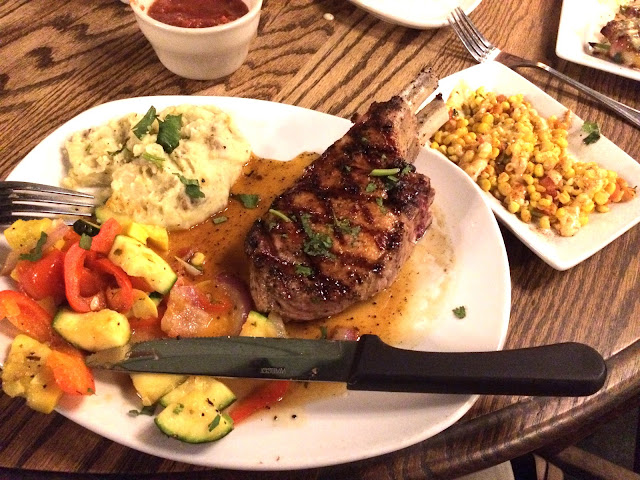 At Opie's BBQ, one must take off one's hat to their offerings of Texas smoked fare; they serve it the old fashioned way--until it runs out! 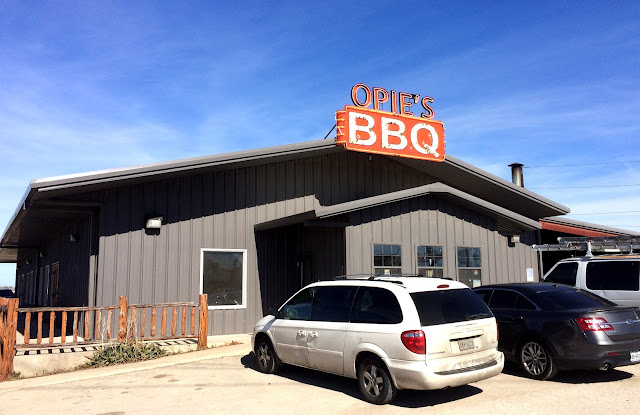 Besides having great BBQ, the owners also have side dishes to die for--things like spicy creamed corn, tater tot casserole, butterbeans and some killer cobbler. This place is some distance from Austin, out highway 71 to Spicewood, but worth the drive.

We traveled close behind Steve and Jackie out to Marble Falls, where we were obligated, of course, to have dinner at the legendary Bluebonnet Cafe. We had coupons for free pie, and that's all it took to get the whole bunch out there, and the food, fun--and pie--were great! 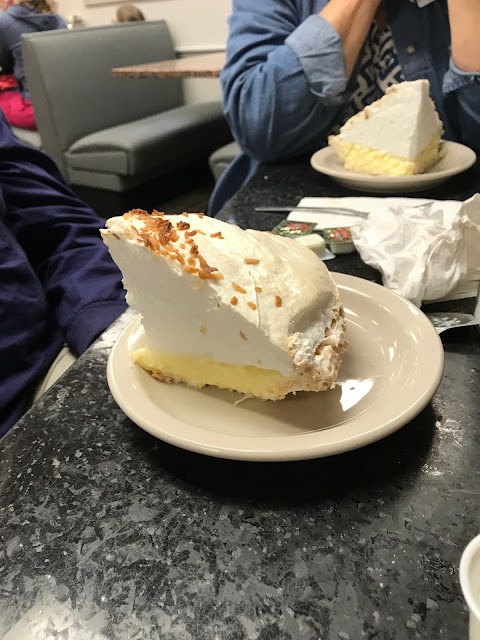 Earlier in the day, soon after our arrival at our site at Sunset Point, I had a slight accident while doing something I shouldn't have been doing--rushing--to get Phannie parked and set up and join our group for lunch. No, there was no damage to Phannie, just to my little finger that somehow I neglected to remove fully from a closing belly door. It nearly sliced the tip off my finger, and the result was, well, a little bloody, I'm afraid. We quickly headed for the hospital, where the wound was sewn up expertly with four stitches after I struggled, with the complication of my infirmity, to complete the endless paperwork that I think would have sufficed for a heart transplant. 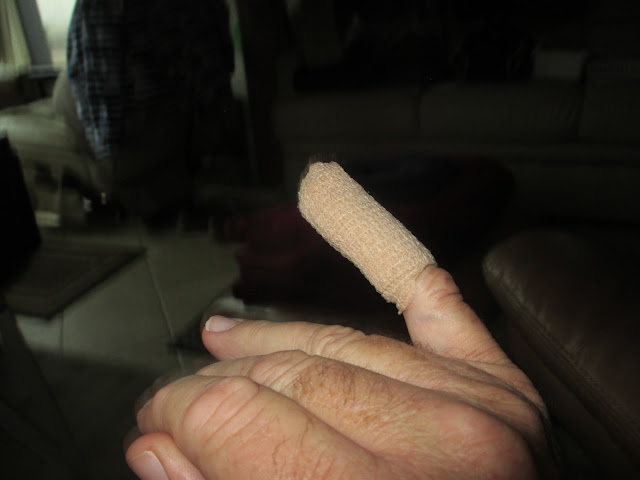 I'm not going to show you the wound like some bloggers do when they suffer injuries (some of the photos included in their posts are pretty gruesome, and I never understood why they think their readers want to see that).

But, back to my pinky:  Okay, I can hear you out there right now: "For God's sake, Mike, what's the big deal?" Well, it wasn't a big deal but, for some reason, the fact that it was my pinky finger seemed automatically to diminish the seriousness of the wound to, well, zero in the minds of my "friends" in the club. I reminded them that it required four stitches, but that didn't seem to matter. I was going to get roasted about this.

Upon my return from the hospital, people who I previously thought were really nice, caring folks were merciless in their teasing me about my ineptness in doing something as simple as closing a bay door without requiring a hospital visit. I confess to egging them on by pretending to be largely "disabled" by the trauma--using a cane to walk and even pretending to need a footstool to get into a car. Totally ridiculous, of course, but hey--aren't we supposed to act more childish when we get old? 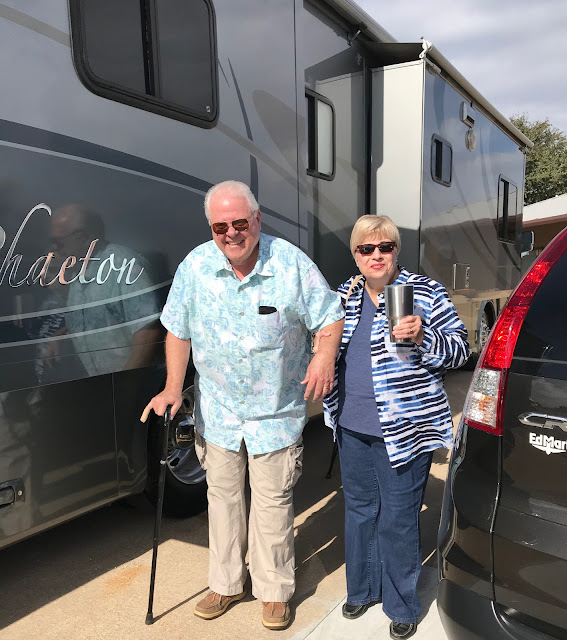 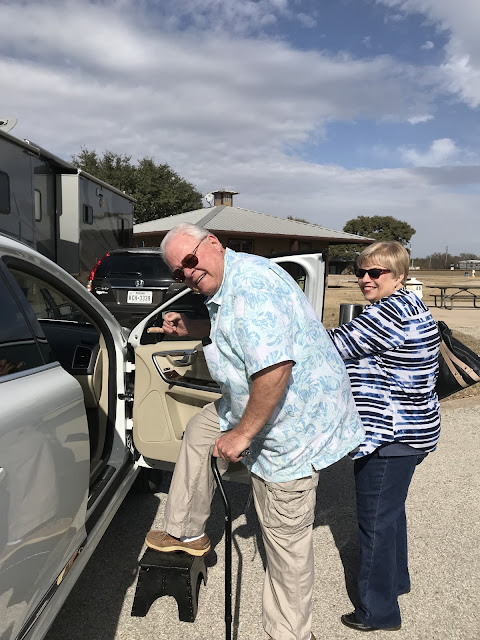 It was all great fun, of course, but perhaps less so for me than the others, as their fingers weren't the ones doing the throbbing, were they?

The next day was the regular club business meeting, where we also had 'Tech Talk,' a show and tell that's always a popular means of catching up on the latest info and gadgets for RVers. Chip leads this discussion and always does a fine job. 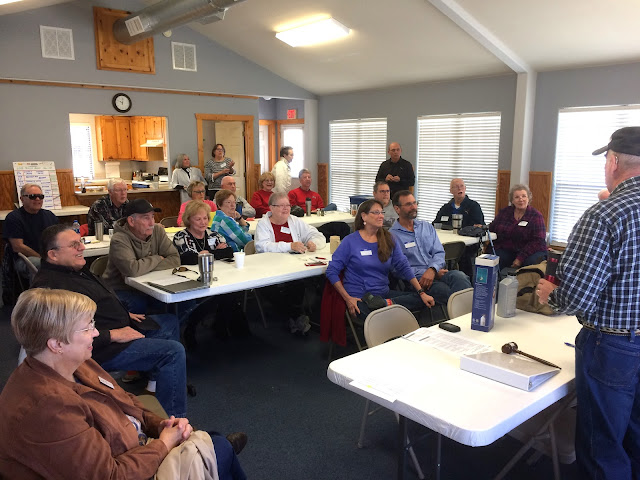 Many in the group were headed to Quartzsite after the rally, but we couldn't resolve some scheduling conflicts to make the trip ourselves. We're headed to Fredericksburg for a couple of days before returning to Conroe.  I'll have a post about that next time.

I had rather see the world and own little than to own the whole world and see little of it.
--Alexander Sattler