The National Museum of the Pacific War and Killer BBQ

Since our rally in Marble Falls was so close to Fredericksburg, we decided to drop in there and take a look at the Pacific War Museum. I had heard that it had seen a massive expansion and, since I am a WWII history buff, I really wanted to check it out. 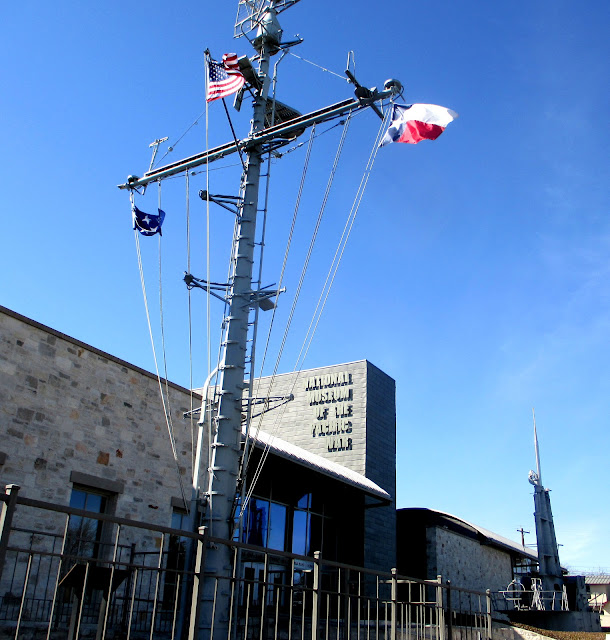 I must tell you that the museum is unrecognizable from the rather sparse exhibit that it was many years ago when I first visited it.  We were surprised at how large and well done it is, arranged as a labyrinthine timeline beginning with the ancient history of Japan's conflicted past and its quest for hegemony among its neighbors, the principal of which was China. I found this history particularly interesting and revealing, as I really didn't have a good understanding of the influences over centuries prior to WWII that led to its aggression toward the United States; this large exhibit explained it nicely. The exhibits continued until the bombing of Hiroshima and Nagasaki and the resulting Japanese surrender. There were many other exhibits, some interactive, along with plenty of narrative, including a walking audio, that explained each presentation like, for example, a B-25 from the Doolittle raid over Tokyo: 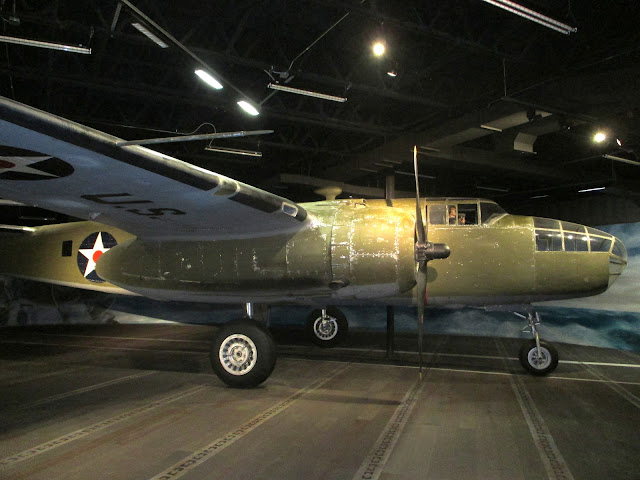 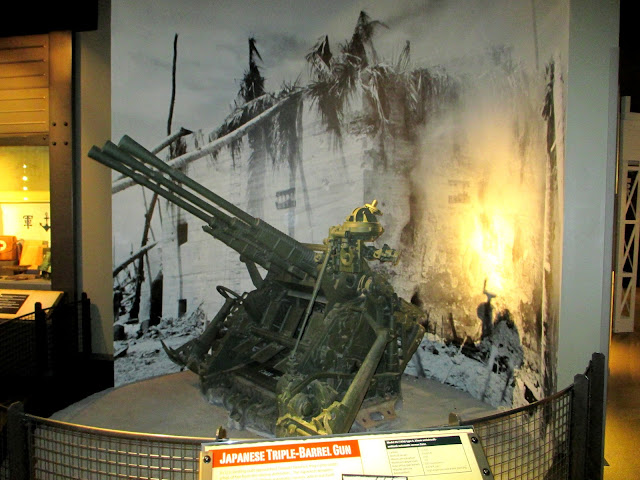 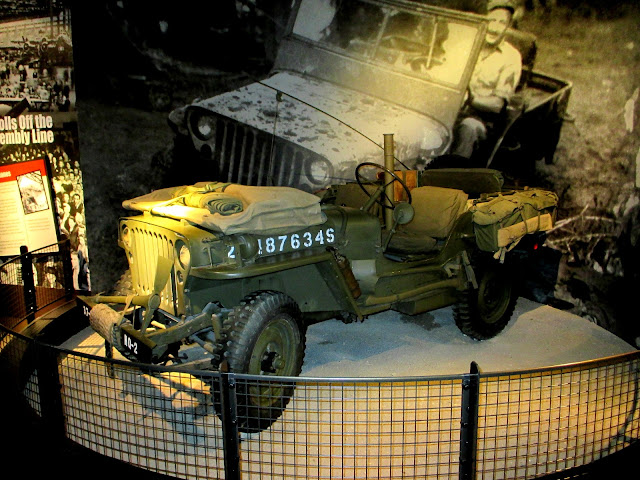 I found the interactive displays especially interesting, in that they depicted in a video presentation the strategy and plans for many of the most important battles in the Pacific theater.

As might be expected here in the hometown of Admiral Chester Nimitz, the Commander-in-Chief of the Pacific Fleet, his presence was certainly apparent in videos and in a separate building where his life story was presented: 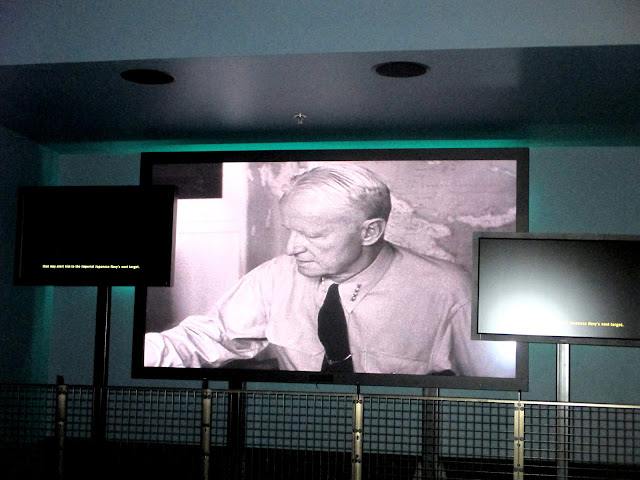 What was evident from the presentations was that Nimitz, who eventually rose to the five-star rank of fleet admiral, was the right man in the right place at the right time to ensure Japan's defeat. His inspiring values of hard work, coolness under duress and wise decisions, along with a little good luck, served him and our country well. I found his strategy at the battle of Midway, about which a really good movie was made, particularly fascinating.

We weren't able to see the entire museum in one day, so we'll have to return to see it all. We couldn't stay any longer this time, as we needed to get back to Conroe for my (yuck) colonoscopy that has been scheduled for some time. And, while I'm on the subject of colonoscopies, if you are over 50 years old and not having these done every few years, you are playing Russian roulette with your life. I am an ardent proponent of these, having even devoted a couple of posts to the subject, one of which you can read here. You can also search on "colonoscopy" to see the other one.

On the way back, we stopped in Elgin at the Southside Market for some barbeque: 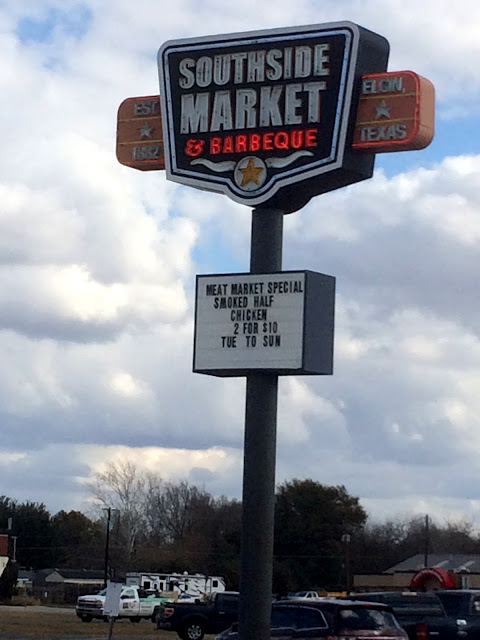 One of the nice things about this place was that it had a huge parking lot that would accommodate Phannie and even several other motorhomes as well. And the barbeque! Well, see for yourself: 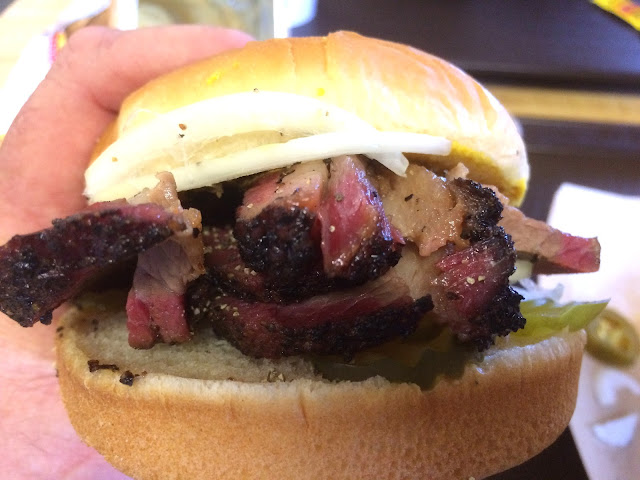 This was their "small" brisket sandwich!  This large place also sports a meat market where you can buy their products like smoked meats and sausages. And yes, this goes on my list of favorite restaurants, linked over there in the right margin.

We'll be in Conroe for a few more weeks, then we'll be making our way to Branson with an interim location yet to be determined. Stay tuned!

I had rather see the world and own little than to own the world and see little of it.
--Alexander Sattler
Posted by Mike Mills at 12:55:00 PM