Finally! The stitches have been removed from my overhauled knee, just as the redbuds come into full bloom here in southeast Texas. I feel a stirring from within as the trees timidly issue little feelers of green sprouts, obviously fearful of the dreaded Easter cold spell that the ancients always talk about as inevitable.

So, what is this stirring that I'm starting to feel inside as I view the ever-so-nascent tiptoeing into spring? No, it's not that; don't be silly; I'm a septuagenarian. It's hitch itch, of course!

With visions of bringing the long-idle diesel to life and driving away soon, I make the trek around Phannie's six wheels and check the tire pressures, which I expect to have dropped a bit after several weeks immobile in the cold weather. Now, if you were paying attention, you will remember that I mentioned above that I just had the stitches removed after my knee surgery, and you may be wondering how I could kneel, in my delicate condition, at each tire to check the air pressure? The answer is that I can't yet--that is, on the left knee--it's still a little tender. Why not bend over, you say? Oh please; you must be kidding!

Well, that's a perfect setup to show you the cool kneeling pad I bought that has proved to be worth every penny: 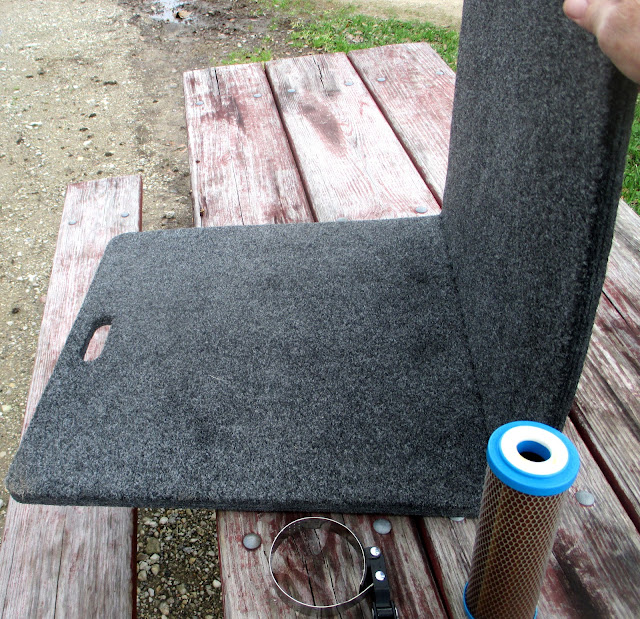 (While you're looking at it, take note of the water filter cartridge in the foreground; I'll be talking about that a little later.)

It's a ProFlex 380 foam kneeling pad, available from Amazon. Although it's called a foam pad, this is not foam in the usual sense, but a quite rigid pad that will provide protection from rocks and gravel while providing a degree of softness to the knees. It folds in two and can easily be tucked away with a very narrow footprint in a storage bay. I especially like the large size of the pad when unfolded. Sometimes it is necessary to spend quite a while kneeling or even sitting on the ground beside the coach while I'm tending to something and, if the ground surface is rock or gravel, it can be murder on my kneecaps or gluteus maximus, of which I have more than ample. But hey, no problem with pad, as it covers plenty of ground to sit and even spread out tools if I like. 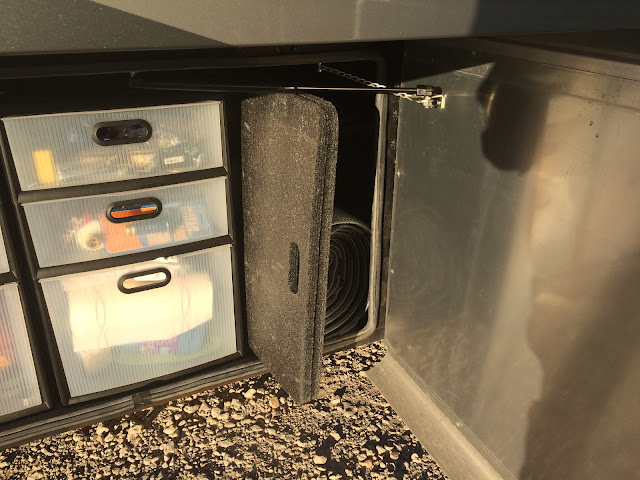 Now, you may be a little underwhelmed by this discovery, especially since it will run you north of thirty bucks. Well, I get that, but you should know that it is one of a few really important and helpful things that I use almost every day, and I wouldn't want to be without it, no sir.

Now, back to the water filter pictured above. You can see that this sucker is dirty, I mean, really dirty. I had sort of forgotten to change it for a while (out of sight, out of mind), and it was choked with sand and no telling what else. It finally dawned on me as to the problem when the faucet pressure inside the coach began to get weak enough to be noticeable.  I was appalled to realize how much gunk we had picked up over the last several months. I now have a reminder set for filter changeout every quarter, and I hope this is about the right frequency.

Departure day finally came, and we turned Phannie eastward toward U. S. 59 that would take us toward our Branson, Missouri destination in a few days. I made a brief stop in tiny Shepherd, Texas to pick up some favorite salsa from a local vendor who makes it in small batches to sell at flea markets and online; it's a little on the garlicky side, and I like that. They also have a milder version, but no self-respecting Texan would be caught buying such a thing. 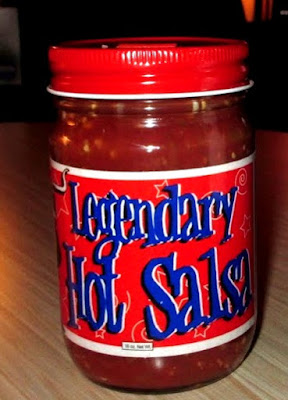 Okay, some of you will probably be curious where to get it, so you can look it up at www.whhranch.com. But don't get in a hurry for it; they sometimes run out and can't always get another batch into the queue right away. They have lots of stuff like this, and it's all good. In fact, I think I'm going to get up from the computer and open a jar right now. And I know right where the tostadas are.

I parked Phannie beside McLain's grocery, where the salsa is sold and, since it would take only a few minutes to go inside and pick up the salsa, I left Phannie's engine running when I left the coach. As soon as I exited the door, I heard a noise from the engine compartment that I didn't like. Listening closely, it sounded like a chirping fan belt, and I knew this wasn't good; the belt could probably swarm at any time, and I am not fond of breakdowns on the side of the highway.

We stopped down the road at a favorite catfish place for lunch, and I began to call around to see if I could find someone to replace the belt on a Friday afternoon. I was anything but optimistic. Then I called the San Jacinto Truck Center in Shepherd, and found myself talking to the owner, Cruz. He was very interested in helping me and asked for the engine and chassis serial numbers. He said he could have the belt in an hour, so we finished lunch and drove about ten miles to his shop, which was in the middle of nowhere outside the tiny town of Shepherd. The ramshackle facility was surrounded by perhaps a dozen large diesel trucks in various states of repair where a small army of uniformed mechanics worked diligently under Cruz's direction. I drove into the parking lot, and Phannie seemed terribly out of place among the many well-worn and dirty trucks. Cruz met me immediately and, before long, his son arrived from Houston with the new fan belt and a tensioner pulley. With these in hand, he motioned for two mechanics to do the installation. This took a while, as the mechanics clearly had not worked on a motorhome before and didn't know that the top of the engine could only be accessed from inside the coach. But once they had access to the engine from above and below, they knew exactly what to do and appeared to do a fine job.

As I had expected, the old fan belt was shot. The sparkling new one worked fine, and we left Cruz's shop as darkness fell. We were very late arriving in Lufkin, where we would spend a few days visiting friends and relatives in east Texas, but I felt incredibly lucky to have found Cruz; I don't think any other outfit would have tackled this on a Friday afternoon, and I would otherwise have been on pins and needles worrying about an imminent breakdown. The lesson here, I guess, is to walk around your rig now and then while the engine is running. If there's something amiss, it may make itself known as it did this time for me.

The next day, we took a drive through my ancestral homeland of east Texas, stopping at Hemphill Barbeque, deep in the woods outside of town. The place had Bible verses on the walls along with this bit of decor: 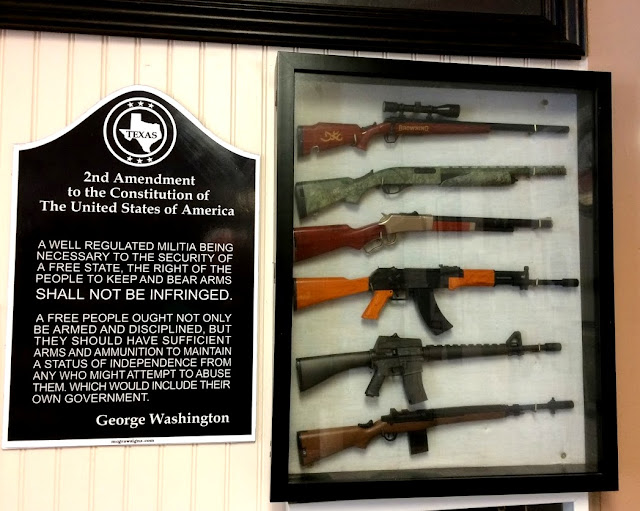 Just call it a guess, but I suppose these may be some of the many southern folks "clinging to their guns and religion," as Obama infamously said. Well, since I'm one of those, I felt right at home here, along with the other patrons, among whom probably half were carrying. I thought to myself, this would not be a good place to try a holdup.

The barbeque? Very good, especially the ribs, which were perfectly cooked with a killer sauce: 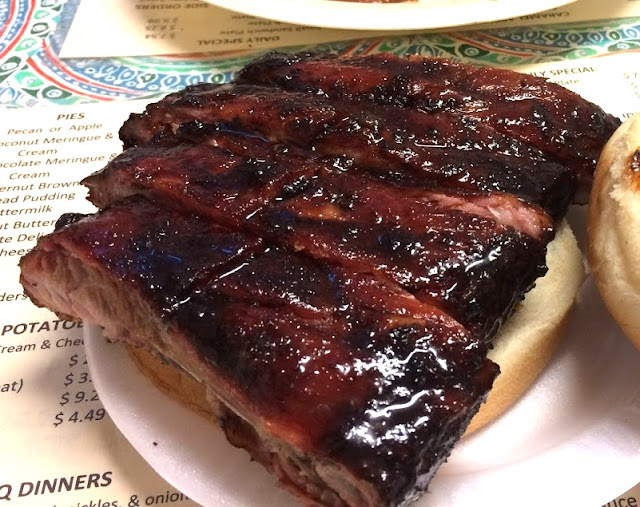 After lunch, we drove to a campground on Lake Sam Rayburn where friends Dick and Judy are workamping for the summer. We had a nice visit, even taking time for a game of Rummikub, which Dick promptly won, unfortunately. These are really good folks although, judging by this photo, Dick seemed on this day to be having a bit of an identity crisis, obviously pretending to be a locomotive engineer: 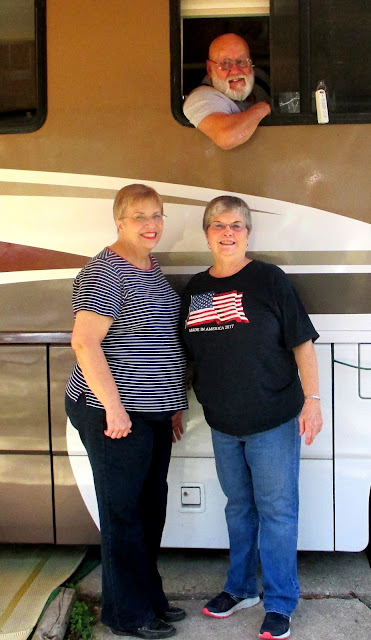 After much conversation and many laughs, we said goodbye and wished them well, stopping nearby at a roadside stand to pick up some freshly cooked pork cracklins. This is a quaint sampling of rural Texana that you don't see everywhere, and I do love to stop and talk to these locals and see their homespun offerings when I can: 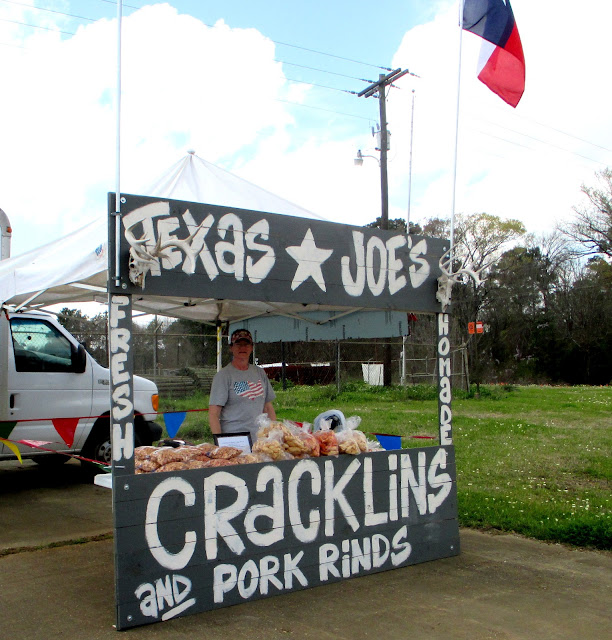 Crunching on a perfectly cooked spicy cracklin', I turned the car north toward San Augustine and Center, Texas. Center, a small town near the Louisiana border, has a special meaning to me, for the local airport was the site where I took my first airplane ride when I was about eight years old. I had not returned until this very day: 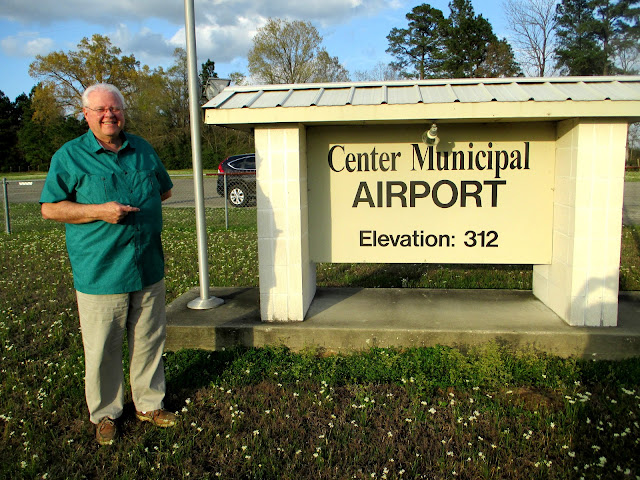 Sandy and I lingered here where I located the spot where I had climbed aboard the ancient little fabric-winged Aeronca Champ some 63 years ago. The airplane was exactly like this one: 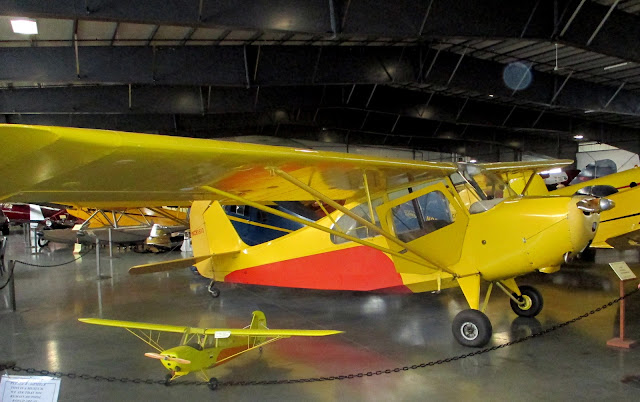 And, oddly enough, this was the same type of airplane in which I flew my first solo flight when I was 16, about eight years later.

During my ride from the Center airport, the little airplane was flown by its owner who, along with several other local pilots, were giving rides in their airplanes for a donation to charity. My parents ponied up the donation for two flights, and I was totally hooked. From that day forward, I knew exactly what I wanted to do for a career--fly airplanes. And that's exactly what I did.

This was a very nostalgic moment for me, and I thought to myself that reliving the past must be what people do a lot of when they get old. I guess there's nothing wrong with that, especially if the times remembered were good ones, as almost all of mine are, thankfully.
The next day, we had lunch with longtime friends John and Pat and, at the restaurant, we ran into my aunt Joyce and cousin Brenda! We just got to do all sorts of visiting that day, and enjoyed it immensely.

The next morning dawned cold on our departure day from Lufkin, and we said goodbye to the vast east Texas forest lands of my youth and pointed Phannie toward Little Rock, where we would overnight on our way to visit friends in Branson. It was good to be back on the road again!