A Visit to Red Bay and Caring for an Aging Motorhome

We knew that our early visit to Branson in mid-March would make us a little vulnerable here in the latter part of winter weather, and we were right. Old Man Winter did not let go of his grip on the area and still has not loosened it as I'm writing this post here in northern Alabama in mid-April. It will be freezing here this weekend, and I'm not sure we will again be venturing this far northward in the early spring next year. The cold, rainy weather has not diminished our enjoyment of the trip, however; we haven't regretted it for even a moment.

Adding to the annoyance of the bad weather is the fact that we are currently in the midst of suffering our annual cold virus episodes. Until now, I have been holding my breath, sanitizing my hands and thinking we may be spared winter colds this year but, alas, it was not to be. Subjecting ourselves to the crowds at the concert and shows seems to have done the trick. So, we have been snorting and sniffling for several days, wondering why it is that the common cold has defied a cure or a vaccine since time began?  Oh, well, at least it's not the flu and, for that, we are very grateful.

Since the trip from Branson to Red Bay was nearly 500 miles, I planned an overnight stop at Craighead Forest Park in Jonesboro, Arkansas. This is a large municipal park not far from downtown that is extremely well kept with all paved roads and RV sites. At 15 bucks a night, it is a real bargain, although there are no sewer hookups at the sites; a dump station is available, however. The park is very heavily wooded, so satellite reception is difficult.


The next day, we had an uneventful trip and parked in the driveway of MS RV Solutions, a highly recommended shop just outside Red Bay. We would spend the next two nights there, as we had a two-day appointment for Phannie. Although we were not having any obvious problems with leaks, I knew that it was time to have her roof resealed. After 12 years, the caulking around the multitude of roof-penetrating devices had become brittle, and it was only a matter of time before a leak would surely develop.

Carl and Daniel, the owners of MS Solutions, have built a solid reputation for excellence in RV repairs due to their small-town southern upbringing that inculcated within them the values of honest hard work done with fairness and quality. For example, while many outfits doing a roof recondition would simply apply new caulk over the old, these guys remove all the old material before recaulking. In all, this job required 30 tubes of caulk, so I'm pretty sure we're good for the next ten years or so.

With the roof reconditioned, it was time to repair one of Phannie's interior ceiling panels that had been subjected to a condensation leak from one of the roof air conditioners. This caused the panel to wrinkle and pull away from its seams and, since this was the only blemish on the coach's interior appearance, we wanted to get it repaired, which Carl and Daniel did, expertly.


It was also time to replace the slide toppers--vinyl sheeting atop the four slides that unrolls and rolls as they are deployed, covering the slides and aiding in repelling rain and tree leaves. The old toppers had decomposed to the extent they had small holes appearing in them, so Carl and Daniel installed a much better quality of canvas to replace the old ones: 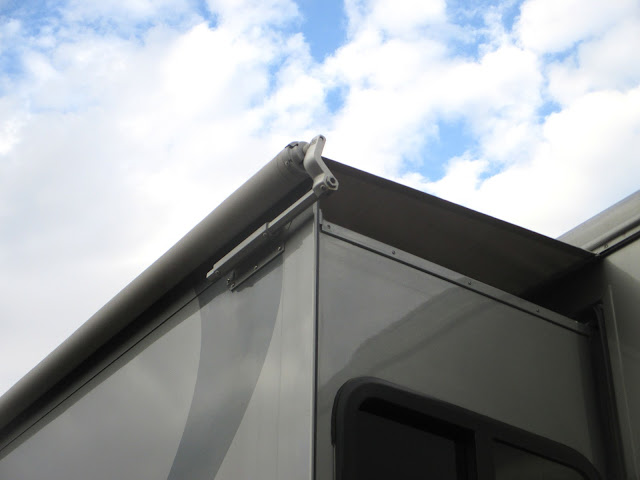 I also had them add an extra 110V plug in the kitchen area that would be wired into its own circuit that would add to our capability to use multiple high-draw appliances at the same time.

For now, we're parked at the Red Bay Downtown RV Park, which stays full most of the time during spring and fall when the snowbirds drop in for Tiffin factory maintenance during their north and southbound migrations. This is actually one of four local reliever parks for the factory campground, whose 100 spaces are almost always full. 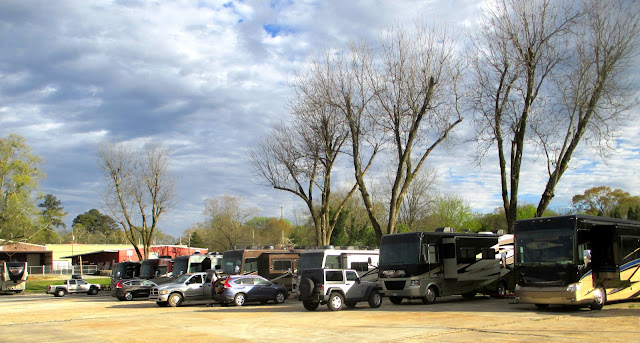 Next week, we will take Phannie for her annual engine and chassis service at Bay Diesel here in Red Bay. Based here in the same town as the Tiffin factory, Bay Diesel has serviced thousands of Tiffin motorhomes over the years, and they have a solid reputation for quality work, much like most of the outside vendors here. I'll have a report on that later.

For those who deliberate on the pros and cons of keeping a motorhome for a long time versus trading for a newer one every few years, the money to be saved by keeping your rig and maintaining it well is rather lopsided in favor of hanging on to it. Of course, for those lucky folks for whom cost is not an issue, by all means, they should take advantage of all the luxuries that a new coach has to offer. For the rest of us, being diligent in taking care of the rig we have will make it last and look good for a long time.

In that regard, a motorhome is much like an airplane. It has a very high initial cost and, if carefully cared for and maintained properly, it will last for a very long time. There are plenty of airplanes flying today that have been around for more than 50 years, and RVs more than 25 years old are quite common. As a pilot and former FAA inspector, I am quite mindful of the rules that force all aircraft operators to perform periodic inspections and maintenance, sometimes replacing critical parts at certain time intervals rather than waiting until they fail. Using the same philosophy, I insist that  Phannie is regularly inspected and that fluids and filters and things like thermostats and belts are changed on Phannie at or before the intervals  recommended by Freightliner and Caterpillar. The same was true for the roof sealing job and the replacement of the slide toppers just finished. Neither of these had failed, but getting repairs done after a failure could be much more expensive and inconvenient than having their repair planned in advance of failure.

I'm glad that Phannie has the highly-reliable Caterpillar C7 engine, one of more than 1.6 million over-the-road engines built by the legendary company over the years. It is expected to accumulate 450-500,000 miles before an anticipated failure--even better than the also-legendary Cummins diesels, whose expected failure threshold is 350,000 miles. These mileage levels will probably not ever be seen by most RVs, so I'm not terribly worried about having to replace Phannie's engine while we have her, as we average only around 7,000 miles per year. And there's the DEF thing--the need to add diesel exhaust fluid, at extra cost, to the fuel of newer diesel engines due to EPA regulations--Phannie doesn't have to bother with that, thankfully.

Over the seven years we've owned Phannie, her average yearly cost for maintenance--of all systems, including the "house" part of the rig--has averaged about $2,400 per year. That does not include new tires and the cost of some optional upgrades we've done. Considering that the cost of trading "up" to a newer used coach could be at least $100,000 or more, it's easy to see which is more cost-effective. Of course, the price tag on a new Phaeton is around $400,000, so that would, of course, be for those who don't care about cost-effectiveness, as it simply flies out the window.

Stay tuned for Phannie's "well-woman" check report from Bay Diesel. I know you can't wait to find out!