Sprucing up Phannie, Meeting new Friends and a Return to Branson

While we were waiting at Bay Diesel in Red Bay for some troubleshooting to our car (see the previous post), a pleasant man engaged me in conversation while I was standing near Phannie. He pointed to one of the maintenance bays where another 2006 Phaeton was getting serviced, identifying it as his. As he hadn't owned his rig for long, he was asking about certain modifications we had had done to Phannie over the years, information I happily supplied. He was soon joined by his wife and introduced themselves as Larry and Kay from Kentucky. After a few minutes, my attention was needed by the mechanic, so we continued our visit at the customer lounge, where Sandy joined us for a four-way conversation.

Kay and Larry were a very likable couple with whom we had a great deal in common, and our conversation with them lasted long after Bay Diesel was finished with their coach. As often happens, we found them to be people we would like to know better, so we exchanged contact information and expressed our hope we would run into them again. I meant to take a photo but, in my approaching dementia, I forgot to do so. Now having a photo of our friends, especially new ones, is important, so I asked them to send me one of theirs, so we could have their visages saved for posterity.


It never ceases to amaze me how many wonderful folks we meet during our travels. We may just have to drop in on Kay and Larry sometime in Kentucky, who knows?

After our unexpected return to Red Bay for the topper problem, we had an uneventful journey back to Searcy, Arkansas and on to Branson. We stopped in Searcy to visit with some more newish friends, Larry and Carolyn, and enjoyed seeing their hometown for the first time. We've made tentative plans with them for some more meetups later on in the year.

Since we had a good deal of downtime in Red Bay, we took the opportunity to do a little modification to Phannie that we had been wanting to do for a long time, and that was to replace the dated mirrored backsplash in the kitchen. Sandy has hated that mirrored surface for years, as it is almost impossible to keep clean from the inevitable splash and spatter marks that happen in that area. So, we pushed the limits of our very sparse abilities and pried off the old backsplash, replacing it with some stick-on faux tile pieces. It wasn't all that difficult, thankfully, and we like the look a lot better. Here's the before and after: 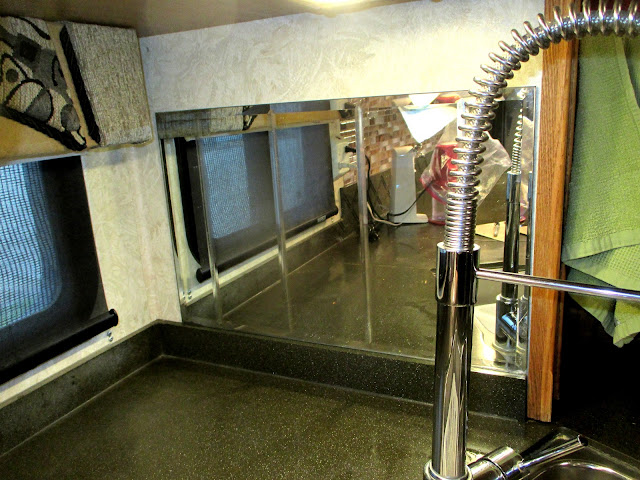 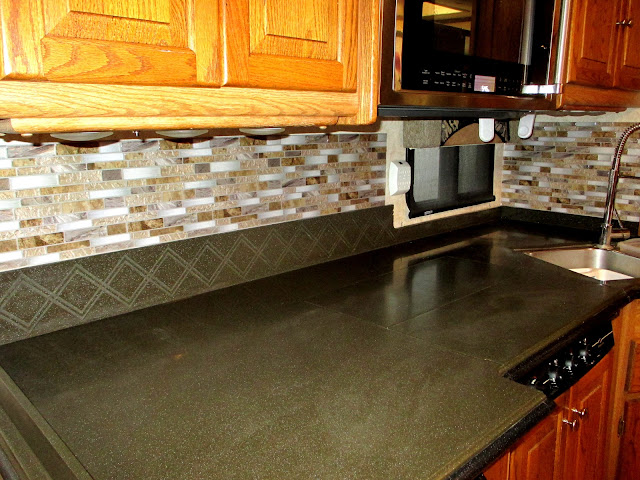 Here in Branson, we're awaiting the arrival of Texas friends Steve and Jackie, who will be visiting here for the first time. We're delighted to be able to show them around one of our favorite places. After that, we'll be heading back to Texas and another rally, visiting friends and relatives along the way. We've really enjoyed our time at Treasure Lake RV Resort here in Branson where, because of our Thousand Trails membership, we pay only $19 a night.