Making A Run For It

The west coast seems to be on fire! Whenever we go to the Pacific Northwest, smoke follows us in the same way as it does our friend Ed Dray when he builds a campfire. Ed is famous for this, much in the same way he is famous for taking guests to restaurants that are closed.  It's all in fun, of course, and Ed laughs as much as anyone.

But this, unfortunately, was serious. Forty-something fires in three states on the west coast were causing death and mass destruction. We really hadn't been watching the news, but we began to pay more attention after the last post and the nice photo of Mt. Rainier. We got up one morning, and all of northwest Washington was enveloped in thick smoke. At first, I thought it was just cloudy, but the skies were clear!  The smoke was so intense that you could look directly a the sun and it would not hurt your eyes; it just looked like a bright moon.

We had never seen anything like this, so we thought it would be a good idea to get the heck outta Dodge--but which way? There were fires to the south of us and to the east of us, and the other two directions would take us into the Pacific Ocean or Canada, neither of which was possible at the moment.

After a little homework, I decided to head eastward (the fire east of Seattle was not close to I-90) and then southward toward Texas. Since it was more than 350 miles to Spokane, I thought that would  relieve some of the smoke problem, so we fired up Phannie and took off.

Did it help? Well....no. The slight wind was out of the west, and it was blowing the smoke all the way to Spokane. Here's proof: In the photo below, taken not far from Spokane, there is a large overhead bridge about a half-mile in front of us. To the right and left of the roadway is a large lake--except you can't see it. If you look very closely, you might be able to make out faintly the end of the superstructure of the bridge: 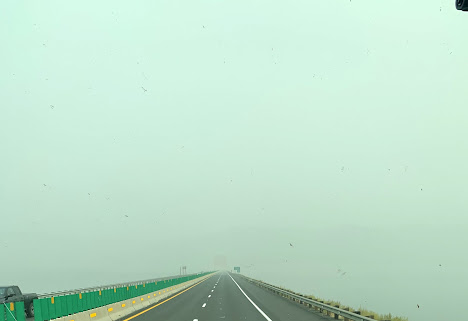 Beyond the bridge is a ridge of forested hills that you might be able to make out faintly. I'm sure it was a scenic area, but we'll never know.

So what had we accomplished? We certainly didn't improve things smokewise, but at least we're out of any fire danger. When we arrived at our RV park, neither of us felt like preparing any food, so we tried a very nice Thai restaurant that had one of the most interesting ceilings we've seen. Although you can't see them in the photo, there were hundreds of tiny embedded lights representing stars. Unfortunately, the food was just okay, so it won't make the favorites list. We thought the decor was quite beautiful, though: 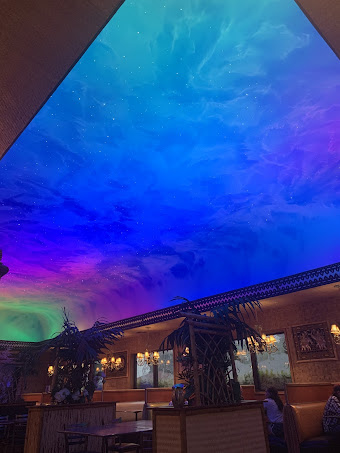 Somehow, this made us feel better about driving I-90 for the entire day and seeing virtually nothing but a half-mile of pavement in front of us. It reminded me of a few of my flying days when the flight was made entirely within the clouds, the only thing actually being seen was the takeoff and landing. My friend Ed, whom I mentioned above and who flew a corporate jet for years, knows what I'm talking about.

Tomorrow we're leaving for Butte, Montana, where the visibility report at this writing is three miles in smoke. Hey, that sounds pretty good; it's about a 500 percent improvement!