Mt. Rainier - King of the Cascades - And the Most Dangerous

I almost never write a post that has no photos, and I just as rarely write one that includes only a single photo. However, of all the photos that I took of Mt. Rainier during this visit, this one was, hands down, the best: 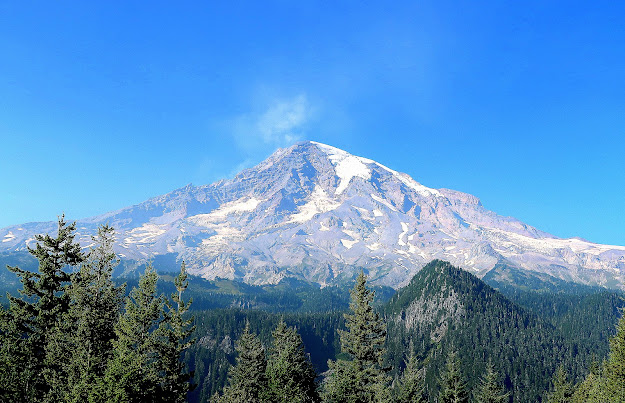 Covering some 236,000 acres, Mt. Rainier National Park is the fifth to be dedicated as such in the U. S., in 1899. This shot was taken from about the 5,000 foot level, which means that the remaining 9,441 feet upward is what you are observing in this photo. Mount Rainier is the tallest mountain in the Cascade range and is one of the five active volcanoes in the Washington State--the others being Mt. Baker, Glacier Peak, Mt. St. Helens and Mt. Adams. All except Mt. Adams have erupted in the last 250 years--averaging about one every 50 years. (It has been 41 years since Mt. St. Helens erupted, so beware!) It also should be noted that, in the entire Cascade mountain range, there are no fewer than 20 active volcanoes.

Rainier is considered the most dangerous of the volcanoes (see the steam venting from the top?) because of its size and its vast number of glaciers and potential debris fields. If it should have a major eruption, some 80,000 people would be in imminent danger. The volcano, of course, is closely monitored so, presumably, there would be enough warning for an evacuation. Upon its slopes are no fewer than 25 glaciers, two of which are the largest in the U. S. It is said that if Rainier should erupt, the flooding from the melting of the immense glaciers, carrying with it enormous debris fields, would be nothing short of cataclysmic.

The mountain was named, oddly, by Captain George Vancouver of the British Navy, who gave it the name of his friend, Rear Admiral Peter Rainier, also an officer in the Royal Navy. Vancouver's claim to fame was his expeditions in the late 18th century, wherein he charted much of the coastal areas of the northern U. S. and southern Canada. Vancouver Island and the city of Vancouver in Canada are named for him, as is the U. S. city of Vancouver, Washington. Add to that Vancouver Mountain, on the U. S./Canada border, and about a half dozen other mountains worldwide. I certainly wouldn't be one to deny Captain Vancouver his due, but this just strikes me as a trifle overdone (unless I were British, I guess). As for Mt. Rainier, I don't know, perhaps it's the idea of such a breathtaking national U. S. landmark carrying the name of a British Admiral. That just doesn't seem kosher. (My apology for that atrocious non sequitur.) By the way, you may be surprised to know that the name of the mountain is almost always mispronounced by those from other places. The accent is on the first syllable, not the last. (Credit this to my friend John Abbey, who has friends here among the locals.)

Mt. Rainier is a mountaineer's dream; its ascent is attempted by approximately 10,000 climbers each year--half of whom actually make it to the summit. It is also surrounded by 91,000 acres of old-growth forest and scores of wildlife types, some of which could be quite dangerous for humans unprepared to encounter them.

I really didn't intend for this to be a geology lesson, although it sort of sounds like one, doesn't it? I was merely trying to present some facts that I didn't know but found interesting. As for the single photo, I don't think including anything else would be appropriate. Mount Rainier is often shrouded in clouds, so this post is short, celebrating my good fortune in photographing this gorgeous peak in all its glory on a clear day.