In a Painful Holding Pattern

I suppose it's about time to publish an update, something I don't do often when we're not traveling. In our case, we're not traveling for two reasons: First of all, we're hoping for a Christmas visit with our "kids," as we call our daughter and her husband and our grandsons. As I mentioned before, this has to be under careful circumstances due to our daughter Mindy's occupation as a nurse in a major Houston hospital with Covid patients.

Besides that, Sandy has suffered a setback in the foot surgery she had five weeks ago. After the surgeon's rebuilding of her foot, the stresses thereof apparently caused a bone to break in the area of the repair. This was allowing the repair to come apart, so it had to be done all over again, this time with some hardware installed in her foot to stabilize the bones in their new paths. As I noted in the last post, the surgery is brutal, and now, we are starting over with the healing process, the five weeks we had behind us being lost, of course. Radical foot surgery is among the most painful, and I feel so sorry for her having to endure the painful recovery all over again.

My arthritic knees have improved via the injections I have every six months, so I really don't have any complaints, compared to poor Sandy. I won't even be considering knee surgery until my condition becomes unmanageable.

As we have had healthy lives for so long, it is a little difficult adjusting to the maladies that age brings upon us. Fortunately, our problems, so far, are fixable with modern medicine, and we are remaining positive about our prospects after we are past these bumps in the road. What this has done, however, is to force us to face the reality of aging, although we may not have wanted to do that. We have had five fabulous years of fulltime RV travel and pretty well checked off our bucket list, so it seems prudent to think of our exit plan, as we explained in previous posts. However, because of Sandy's lack of mobility, we can't do much in that regard for a while, so that's why I mentioned we're in a holding pattern.

We have had some nice visits with fulltiming friends Dave and Janice--who have left the fulltiming life now--and Steve and Jackie, who have not. Steve and Jackie stopped by to visit us on their way to Florida for the winter, and we're so glad they did. The following photo shows us at Pappas' Seafood House in Webster, where we had a great meal and good times together: 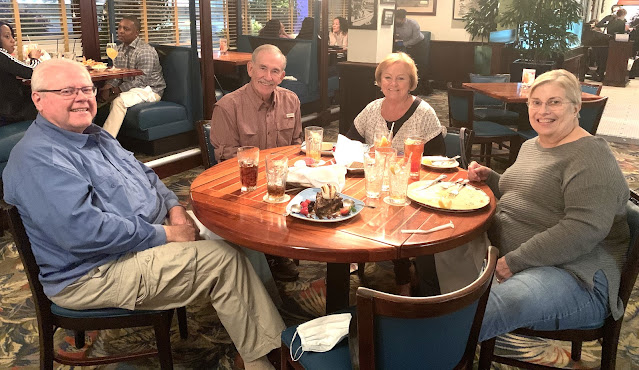 As you can see, Sandy's left foot is in the chair (the white thing is my mask) to lessen the pain. Her repair surgery was only a few days away at this point.

I know you hear these kinds of stories all the time, but our friendship with Steve and Jackie was totally a matter of fate. In an RV park in Austin, I had pulled Phannie into a parking spot next to a couple (Steve and Jackie) who were sitting outside their fifth wheel next door. If I see occupants of an adjacent site outside, I have a habit of going over to greet them in a friendly way since we'll be in such close proximity. When I went over to chat with them, they were extraordinarly friendly and invited me to sit in a nearby chair--a bit unusual, since we had never met. But I sat, and we began to talk a bit. Meanwhile, Sandy wondered what had happened to me, as I hadn't even begun to set up the coach. She eventually came looking for me, was drawn into the conversation, and our friendship has blossomed ever since. Steve and Jackie even switched their planned purchase of a new fifth wheel to buying a Phaeton motorhome, based on what they saw and liked about Phannie.

There are similar stories about dozens of RV friends we've made, and that's part of the mystique, I suppose, of this type of living. We became friends with Dave and Janice, for example, in Idaho, of all places--merely by their recognizing through RVillage that we were both Texans in the same RV park. We met, the chemistry was right, and now we're friends forever.

I can't mention all the stories here, but there are many similar ones. This phenomenon--of RVers being some of the nicest people we've ever met--has been an unexpected benefit that, in our view, eclipses the grandness of all we have seen and experienced in our travels.

We are staying here until we can get back into Thousand Trails in Conroe. Most of the parks seem to be quite full these days, and reservations are required far ahead in some cases. After our three-week stay there, who knows? We've not been hobbled like this before, so we're sort of making it up as we go along.