Good Grief! It's Time to Catch Up

At the beginning of summer, you may recall that we were delayed about a month in our usual escape from the Texas heat because Sandy had the nerve to require a bunch of surgeries. I thought briefly about proposing that the surgeons go along with us at our usual departure time and do the operations en route, but I figured that bumps in the road and mountain curves might give them a little trouble. It would probably not be helpful to slice opon the wrong thing...just sayin'.  However, I guess I could park on the side of the road if they came to a critical part...

Now, for you literalists out there, that was a joke; everyone knows that surgeons don't do stuff like that. I didn't think about checking with veterinarians, though; they might have enjoyed a little mountain scenery. (When Sandy reads this, she will have even more reason to institutionalize me, if the last post weren't enough.)

Okay, that's enough silliness. When we began this trip back in July, our mission, among others, was to find a scenic place at high (and cool) elevation where we could return each summer. I suppose we have been subconsciously doing this for years, but we still hadn't found the right place. Jackie and Steve met up with us in Dolores, Colorado, a small town in southwestern Colorado about ten miles from Cortez. Its elevation is nearly 7,000 feet, which would meet the "cool" criterion, and nearby Cortez is large enough to provide some civilization. Dolores's only suitable RV Park--the Dolores River Campground--was very nice, but too far out of town for reliable cell phone service; so, scratch Dolores.

Cortez was also a contender, and they have a very nice RV park that would be quite suitable, but its elevation is only about 6,000 feet, which would be a the low end of a coolish altitude. Cortez is less than an hour's drive from larger and very touristy Durango, which is at about the same elevation. The problem there was the monthly rentals of RV spaces--$2,100 versus about $600 at Cortez. We don't mind paying a little more for places we really like, but that seemed ridiculous. A plus in Dolores was that we were near good friends Bubba and LouAnn, who spend a part of each summer in Priest Gulch, only 20 miles or so from Dolores. We had a great time visiting with them.

While in the area, we took a little side trip to Mesa Verde National Park, which Steve and Jackie had never visited. We were more than happy to make the trip again, as the drive to the cliff dwellings is quite scenic. Unfortunately, the main area of the cliff dwellings was closed for repairs, but we saw enough for our friends to enjoy the visit: 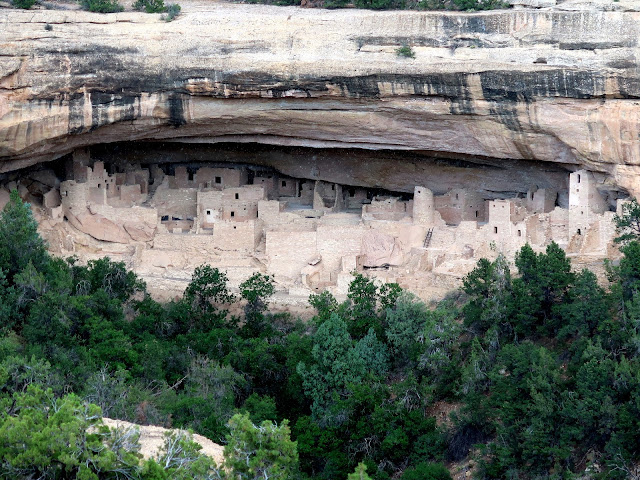 We had planned to move on to our next destination, Montrose, where we could again access the beautiful towns of Ridgway, Telluride and Ouray--places we had visited from Dolores, but just didn't spend enough time there.

Before leaving Dolores, we suddenly thought of a detour that needed to be made: In our conversations with Jackie and Steve, we learned they had never seen Four Corners or Monument Valley, so we insisted that we go there, because they would probably never be closer to those iconic locations. So, ever easy-going and agreeable, they followed us, driving westward into the Utah desert and the heat that awaited us. But this would last only for a short time; we had seen both places before, so we imagined ourselves as efficient tour guides, about which Steve and Jackie seemed happy. That enabled us to see the important sights fairly quickly, so we could then retreat back to the cool Colorado mountains.

Because of our previous visits, we have a number of photos a long way back in the blog, but I'm going to try to include some here that are a bit different. You'll have to bear with me, as there will be a number of these, and some folks get a bit antsy if you post too many. However, we may not come this way again either, and we are including these mostly for ourselves and our record of travels.

Before we get started with Monument Valley, let's talk a bit about Four Corners. Its distinction, of course, is that it is the approximate point on the earth (there is some disagreement among geologists about the exactness of the site's location, but they are probably the only ones who care) where the states of Colorado, New Mexico, Arizona and Utah meet--thusly forming "four corners." It is a place where you can literally touch the ground in all four states, using your hands and feet. We, of course, were much too dignified to get down on all fours to do that (not to mention that we would need to summon EMS to get us up). With our physical limitations in mind, we decided that each of us would merely stand in a different state: 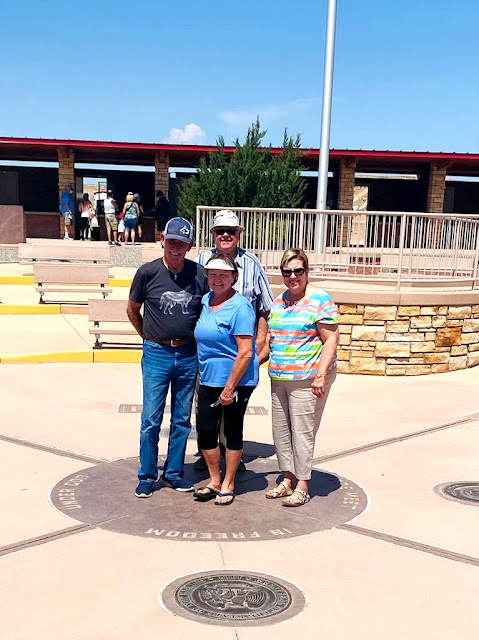 In the photo, Steve is standing in Arizona, Jackie is in New Mexico, Sandy is in Colorado, and I am in Utah. Is it a bit cheesy? Well, perhaps, but almost everyone knows about Four Corners, so it would be unthinkable for Jackie and Steve, who have traveled as much as they have, to admit they had never been there. It's sort of like being a Texan and saying you've never ridden a horse.

Since our last visit, the monument site has been massively upgraded. It is located on Indian land, and the Indians sell various trinkets around the perimeter. Nowadays, what used to be tents are now rows of brick sales stalls.

Okay, let's go forward to Monument Valley, made famous by Director John Ford, who shot many western movies here in the 1950s and 60s, many starring John Wayne. Who hasn't seen one of the westerns with the huge monuments in the background? We parked at Goulding's RV Park, as usual, and took a tour provided by the Goulding complex. Following are a series of photos, all of which are somewhat different from the earlier ones in this blog. Here's one I didn't have in previous posts. It's the cabin used by John Wayne when making all those movies. Gotta admire such simple requirements of a movie star of his fame: 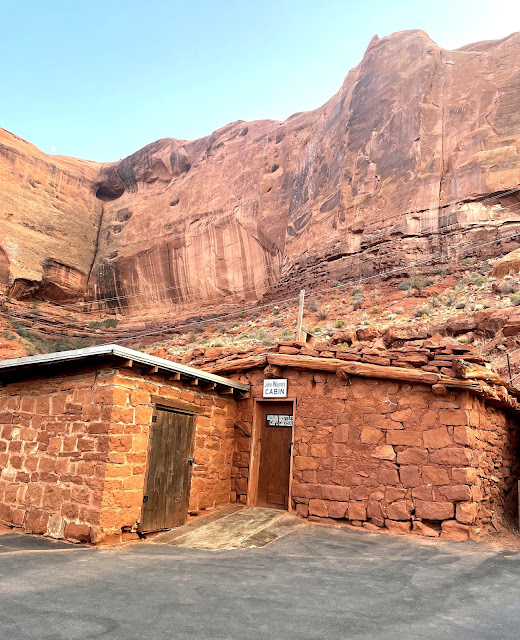 In regard to the photo above, I spent a good deal of time going back through thousands of photos to find this original of Highway 163 leading from Mexican Hat to Monument Valley. This one looks so much better than the one I edited and posted years ago, that I decided to replace it, too. However, my photography skills are inadequate to capture this iconic scene as it should. I wish my brother-in-law, Rick, a skilled photographer, could have been there to do it justice. 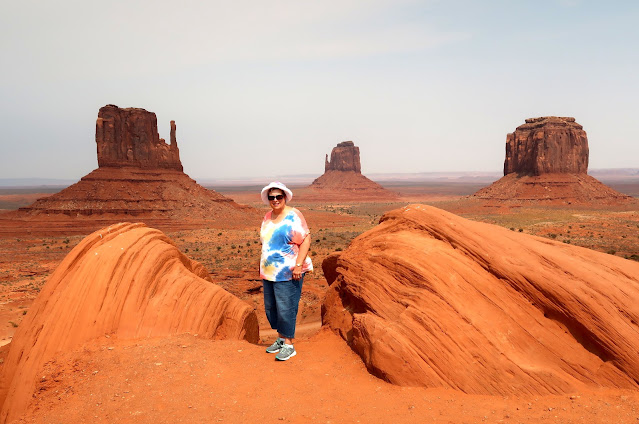 It was essential, of course, to pose Sandy at perhaps the most well-known view in Monument Valley, with the East and West Mittens and Castle Rock in the background.

No matter which way you look, one has to be amazed at the grandeur of the monuments and the immenseness of the territory they cover: 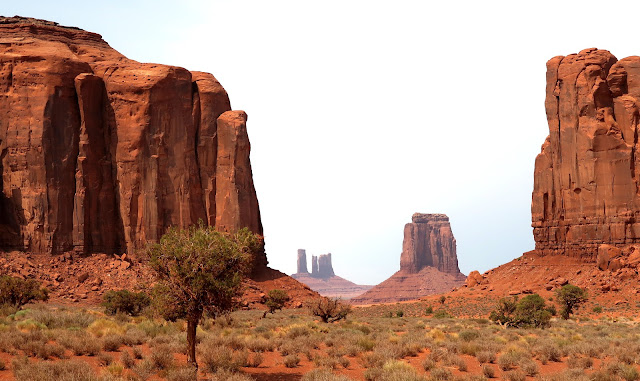 To me, one of the rocks below resembles the stately head of an Indian. 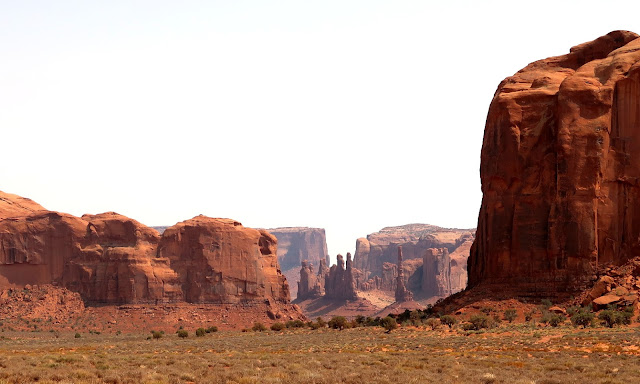 The monument below is named Elephant Butte. It takes a little imagination, but you can sorta make out his trunk on the right side of the rock. 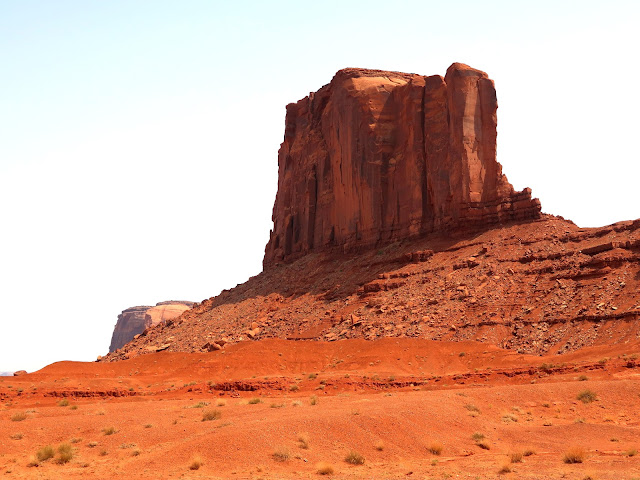 The next one is named Snoopy Rock. It's a little easier to see the dog's face on this one: 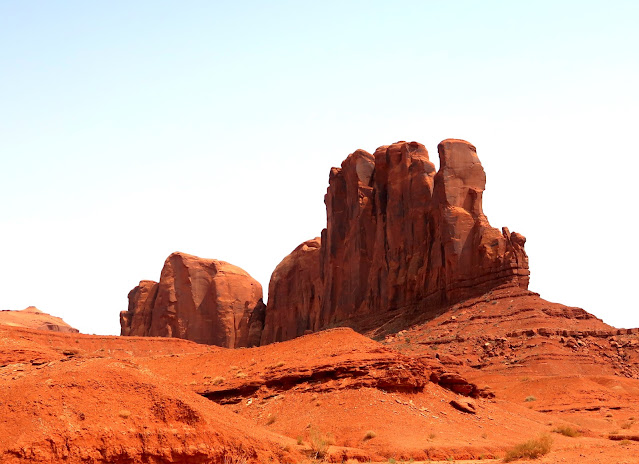 How about this one? Easy to see Jesus standing on the rock blessing the monuments: 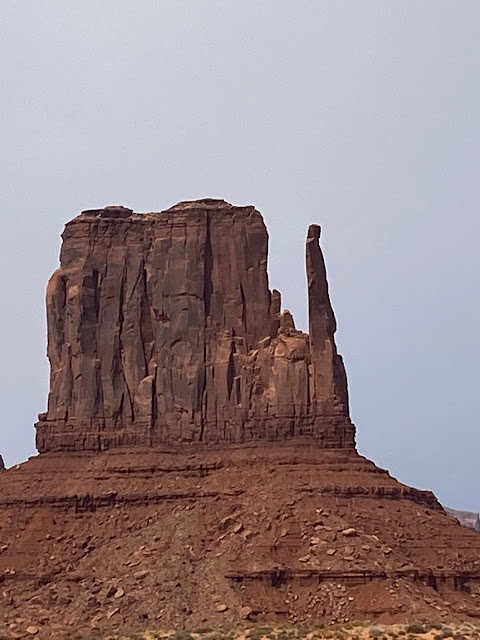 The next photo was taken at John Ford's Point. It is said to have been Ford's favorite area to do filming. I wish you could see the whole panorama around the rock jutting out where Steve and Jackie are standing; it is breathtaking. No wonder it was John Ford's favorite filming location. The three vertical rocks in the upper left corner are known as the three sisters. I'm betting that one of them doesn't get along all that well with the other two: 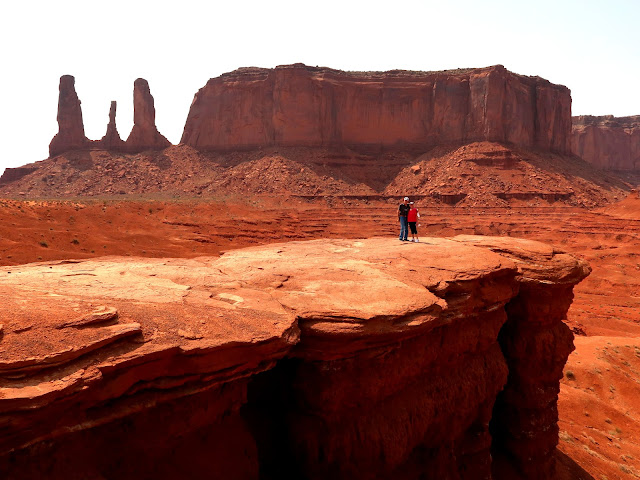 I really like the immense vastness depicted in the photo below. It was taken from the viewing deck outside The View Restaurant at the Navajo Tribal Center. The restaurant, unfortunately, was closed at the time of our visit. 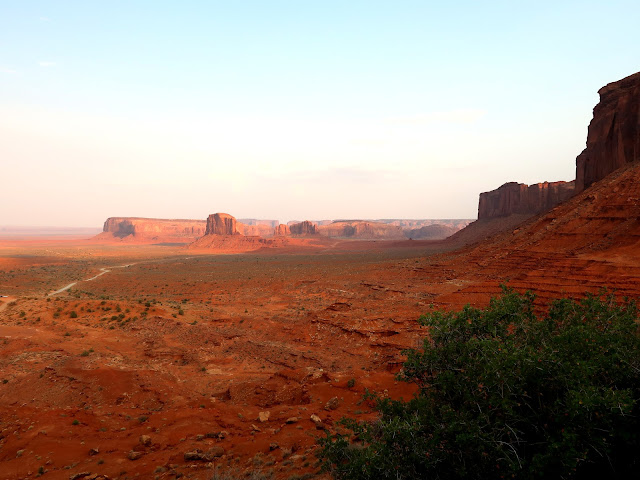 The photo below is named Camel Rock; it gets its name from the two humps on its back: 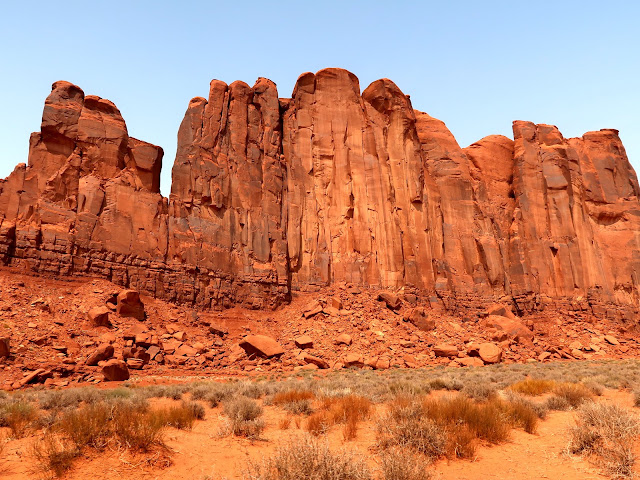 And now, for perhaps the most photographed view in Monument Valley, taken from the viewing platform at the Navajo Tribal Center:

And so ends our visit to Monument Valley, Steve and Jackie seemed thrilled to have seen it in person, which is really the only way to appreciate the grandeur of the place. I will leave you with this photo of a rock formation near Mexican Hat, Utah (mentioned earlier), from which the town gets its name: 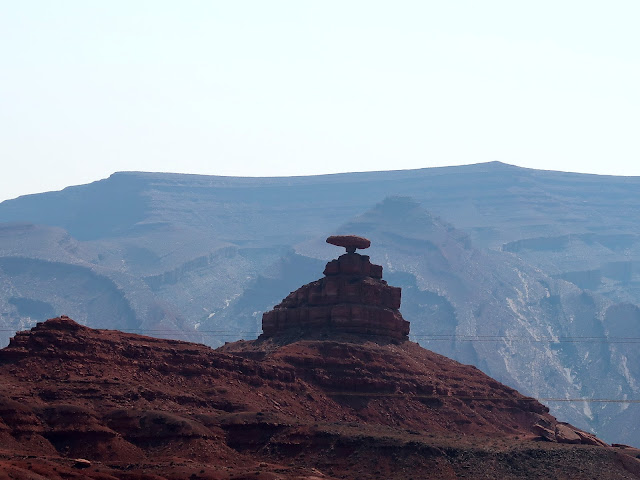 Conditions were not ideal for photography on this trip, but considering the haze of the smoke from the fires in the western U. S., they turned about about as well as could be expected.
From Monument Valley, we drove to Montrose, where we revisited Ridgeway, Telluride, Ouray and Silverton. We just couldn't get enough of the scenery around those places. I won't include photos from these locations, as they appear elsewhere in the blog (just search for the cities). I've got to try to conserve some space, because this post is getting pretty long as it is. I should have tried to catch up our trip a little sooner.
Now we've made it to Gunnison, Colorado which, at 8,000 feet elevation, is the coolest spot yet. Get a load of the temperature a little after noon today. The outside temp is the one on the left: 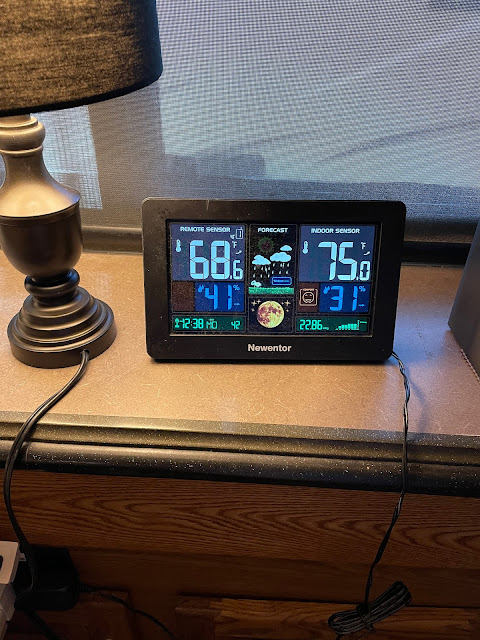 I'll have another update from here as we explore the Black Canyon of the Gunnison, but our time in this cool fairyland is growing short. We will soon be heading back to Texas, and I can assure you the temperature will be nothing like it is in Gunnison. Yes, Gunnison may be a contender in our quest; who knows?
Thank you, Lord, for this wonderful life;
please forgive me if I fail to appreciate it each day as I should.
We don't stop playing because we get old; we get old because we stop playing.
---George Bernard Shaw