At the Gunnison KOA, Gunnison, Colorado...

It has been all too short.  Knowing that we're leaving this beautiful and cool place and the friends with whom we've been traveling has dampened our spirits--even a fascinating visit to the Black Canyon of the Gunnison National Park was not much of a perk-up.

Nevertheless, I must include some photos of this park, which we've not visited before and didn't know entirely what to expect. First of all, these photos probably afford the least adequate sampling of the sights to which one has access in person.  It is, of course, a canyon, much less immense than the Grand Canyon, but completely different in the sheer rock cleavage through which the Gunnison River flows.

It is a place where my jealousy was complete of those whose young limbs carry them through trails where the elderly dare not go. We will not be able to see the sights they see, but our views were more than satisfactory. The nearly black vertical stone walls rise about a half-mile from the river below--twice as deep as Royal Gorge. It is said to be a part of the Gunnison Uplift--as geologists know it, and the park information dates it back 1.8 billion years or, roughly, the geologic age of my knees.

One thing is for sure: we will be returning to see more of this, poorly represented by these photos: 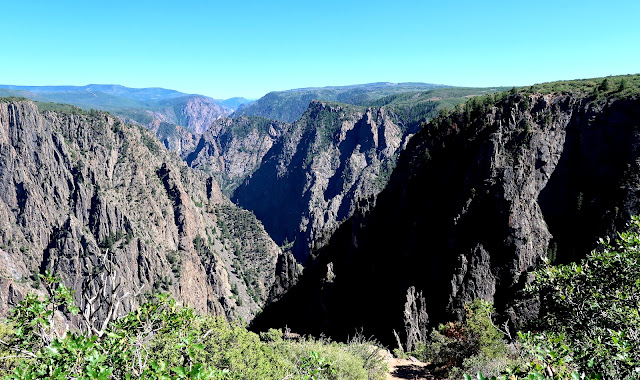 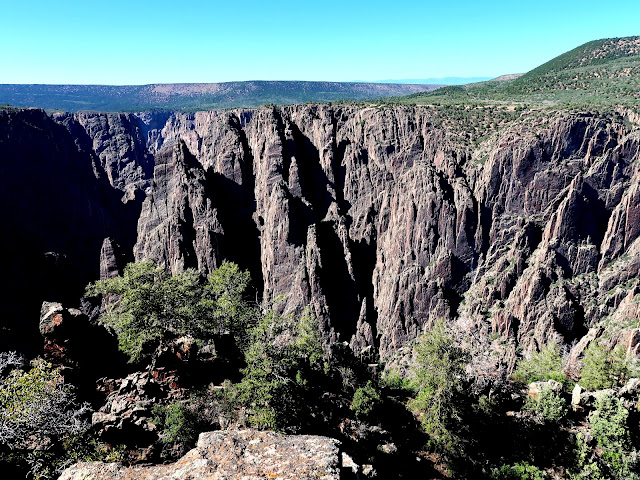 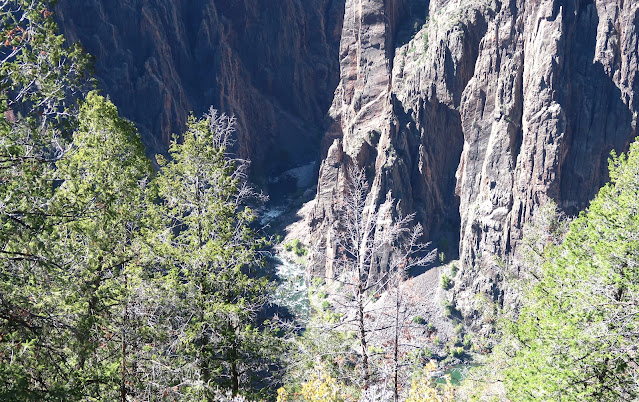 If you look closely in the photo above, you can see the Gunnison River, which is running very shallow due to the long drought in the west. 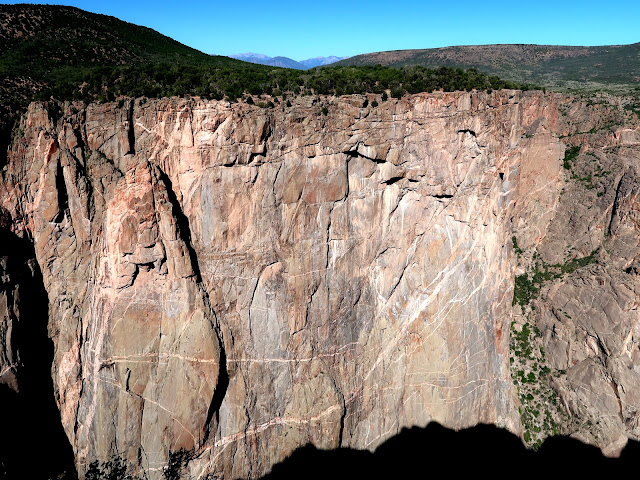 In the photos above and below, the striations in the rocks are very interesting. 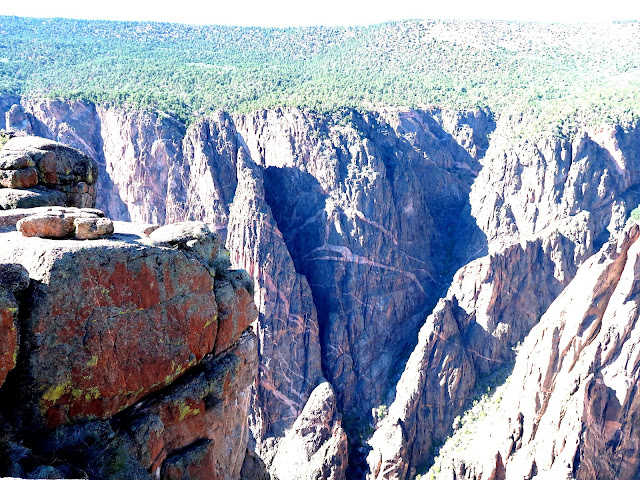 The photo above was a purposely overexposed so that the striations on the far rocks and the colorful lichen on the near rocks would be more evident.  Speaking of striations, how about those in the photo below, located at one of the turnouts named "Painted Rock." You can also see the Gunnison River from a better viewpoint. 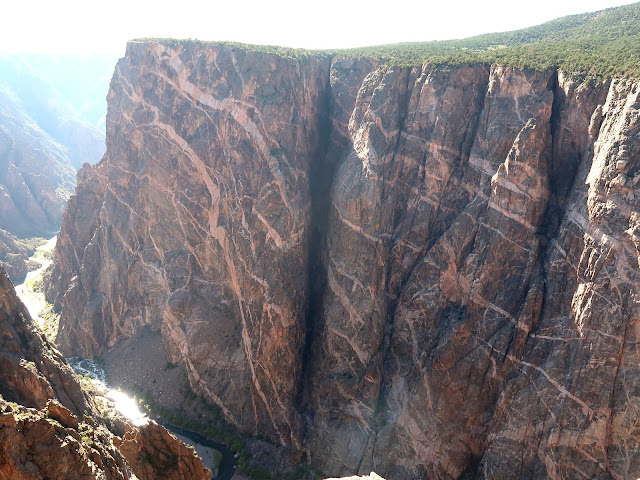 Okay, I know what you're thinking:  Rocks, rocks, rocks. Well, I think the incredible diversity of the formations of the area offers even a non-rock hound a small taste of what eye-popping views can be had here. We even found out that there is an entirely different part of the park that we didn't even see. It is also one of the best areas ever for star-gazing, due to the high elevation and absence of ground lighting. For these reasons and more, we vow to return. 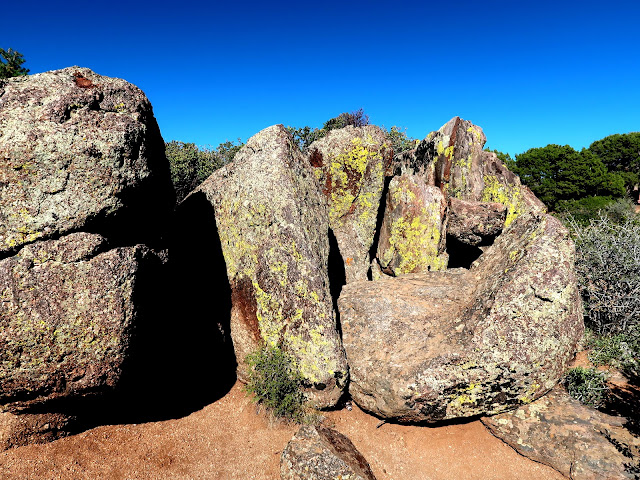 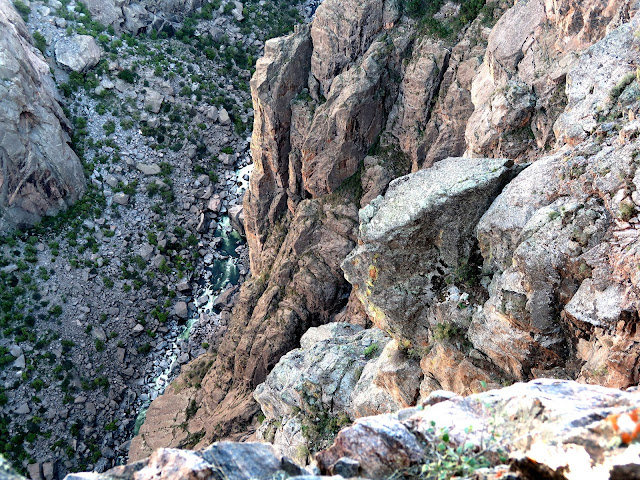 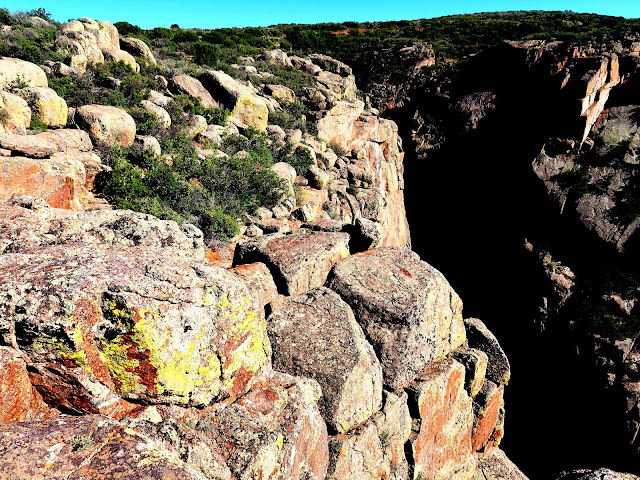 I'll leave you with the last photo I took at the park, showing the northwest exit of the Gunnison as it leaves the canyon heading westward to Grand Junction, where in empties into the Colorado River. The smoke-caused haze in the background didn't diminish much the beauty of this magical place: 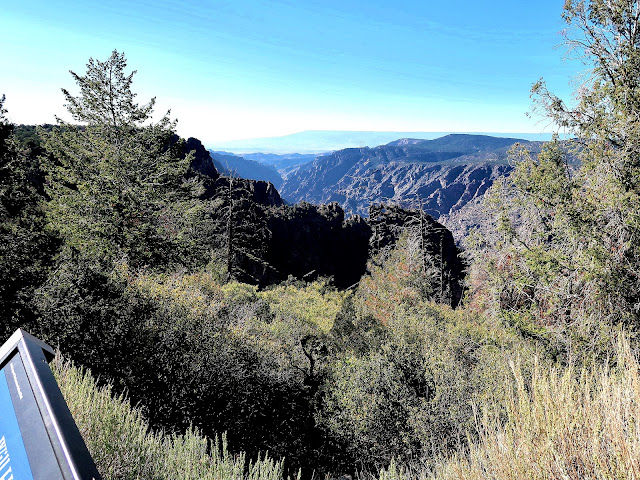 We are also sad to say goodbye to some of the best traveling partners ever.  Here are Steve, Jackie and their French bulldog, Jill, at our Gunnison RV site.  You never know, but you may find us here again one of these summers. 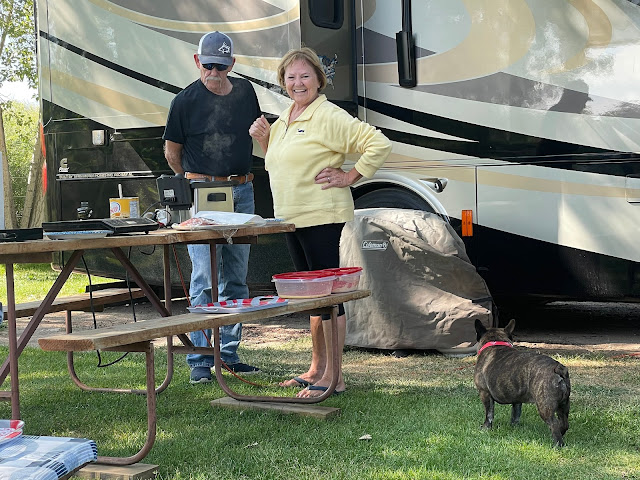