Stuff We Can't Live Without; Did Santa Bring You Any of These?

I hope all you dear readers had a wonderful Christmas holiday. We have returned to the Conroe, Texas area where we will be spending a few weeks during the holidays. Our grandsons are growing up so quickly, it's scary. They seem to have changed with every visit, so there's always something new and different going on. Below, left to right, is Pryce, Sutton (hiding) Mindy, Tyler and Mason. They are, of course, our pride and joy. 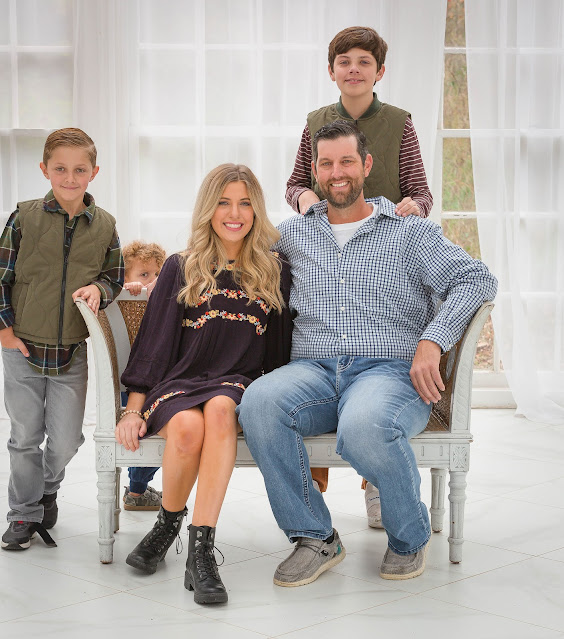 Driving Phannie over here from Hondo was much less taxing than my original venture forth from Fort Worth after only five weeks from surgery. Here I am with my five-week old new knee, pulling out from our convalescing parking spot for the long leg southward. 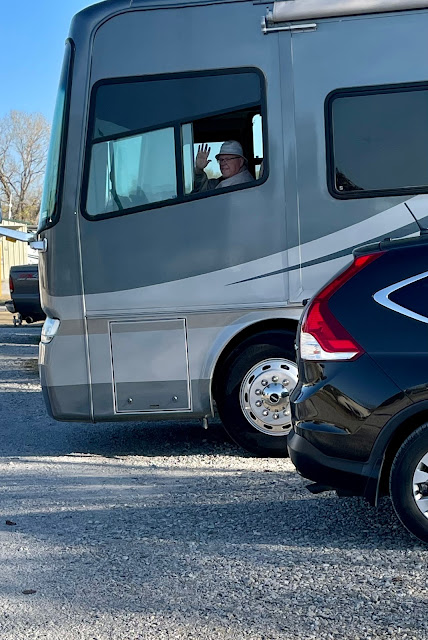 The 300-mile trip to Hondo was exhausting, which is unusual because Phannie is very comfortable to drive. I had not taken into account that I had been relatively sedentary for five weeks--except for physical therapy--and, while my knee was working fine, my energy level and stamina were not up to par. We made it with no problems, though and, after a day of rest, I felt much better.

The knee?  Well, it is still a little tender for the first few steps if I have been sitting for a while, but it's getting better every day. Thankfully, the arthritis pain that prompted the surgery is gone.

Now that I've moved on from that painful and confining episode, I thought I would change the subject completely and write about some RV-related gadgets (some of which I've mentioned way back in the blog) that I just wouldn't want to live without and still do this full-time thing.  This has taken some thought, and I've tried to narrow it down to just the essentials--that is essentials for me--realizing that others' list may be entirely different. But this is based on 16 years of RVing and six years of fulltiming.

These are in no particular order, by the way: 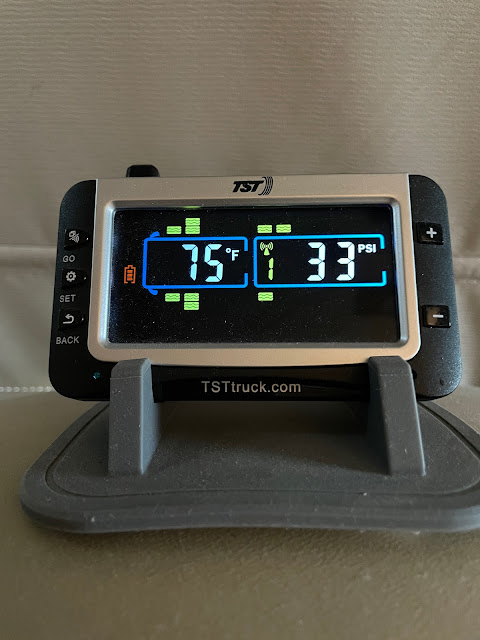 I have tried two other brands of these, and only the TST has proven to be utterly reliable for such a long time. I wouldn't leave without it. 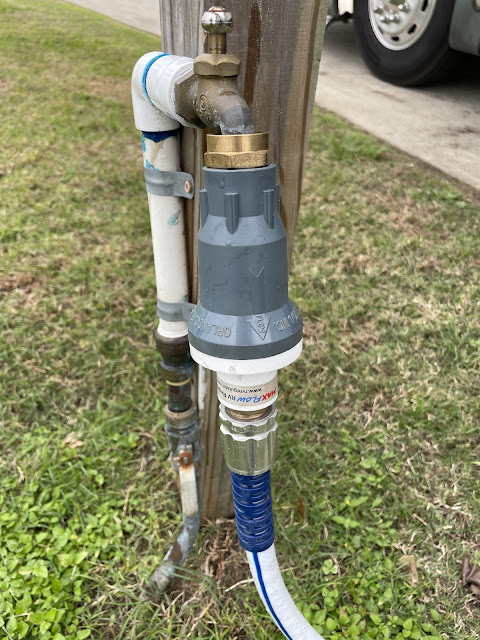 This is a contender for number one in importance. This regulator is amazing. No matter what pressure goes in the inlet (up to 125 psi), it will give you 18 gpm of flow and around 47 psi at the outlet. It reminds me of the Oxygenator shower nozzle in the mystery of how it works. It is not cheap, but I have wasted so much money on other pressure reducers that do not perform. (I can't stand a weak shower flow). You can count on this sucker to give you the same flow all the time, no matter what. I don't even check the park pressure any longer--I just install this thing every time and know it's going to be adequate but not damaging to Phannie's plumbing. More photos: 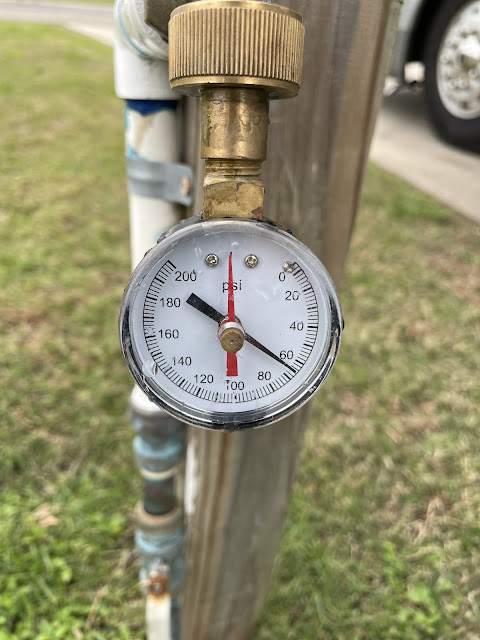 Above is the faucet pressure without the regulator at our current park--admittedly not too much over pressure, but more than you want. 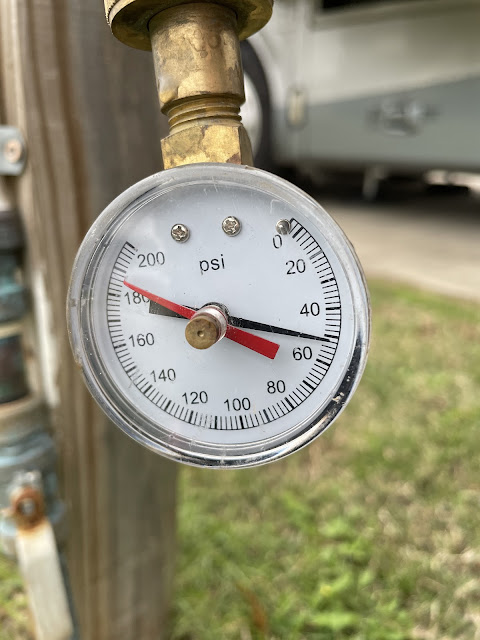 Above is the pressure at the Max Flow regulator output--51 psi; not 47 as advertised, but plenty safe (and the gauge could have that much error). Plus, you have all the flow you could possibly want in the shower. I'm hoping these are still being made; Amazon is sold out. I've got to get a spare. 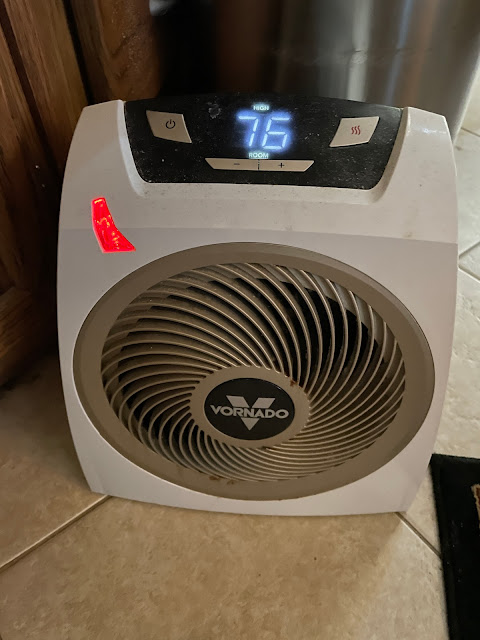 Okay, I'm pretty sure I'll get some difference of opinion on this one. I can hear them now: 1) If you pay your electricity, it's too expensive; 2) If I run it, I can't run much else; 3) It won't heat the entire room; 4) Why not run your heat pump or furnace, etc., etc.

Here's my thinking on this: I'm not talking here about new half-million dollar rigs with heated floors; Phannie is hardly that. But we rarely ever find ourselves in really cold temperatures; most of the time, we just need a little extra warmth and, if it gets really cold, that's when we turn on the propane furnaces. As far as the cost of operation goes, propane costs more. Why? We are usually at one of two kinds of parks: 1) The electricity is included in the lot rental; or 2) We are in Hondo, where electricity is 10 cents per kwh.

As to the argument that if you run one of these at 1500 watts, you can't run much else, well, Phannie has had a workaround for that since day one. When we bought her, we had the dealer install a third air conditioner; back then, they only installed two in the Phaeton. We found out quickly that that wouldn't work in Texas. When they installed the third air conditioner, they had to install another 20-amp electrical circuit, and we use that same circuit to allow us to run two of the Vornado heaters if we need them. The result? We only have to fill our propane tank about once a year. We don't like to use the heat pumps because we want the heat at the floor level, not at the ceiling level. The thermostats in the Vornado heaters allow them to operate without any attention from us; we just set the temperature we want and forget it. Oh, and one more thing:  Did I say we try not to go where it's cold in the winter? 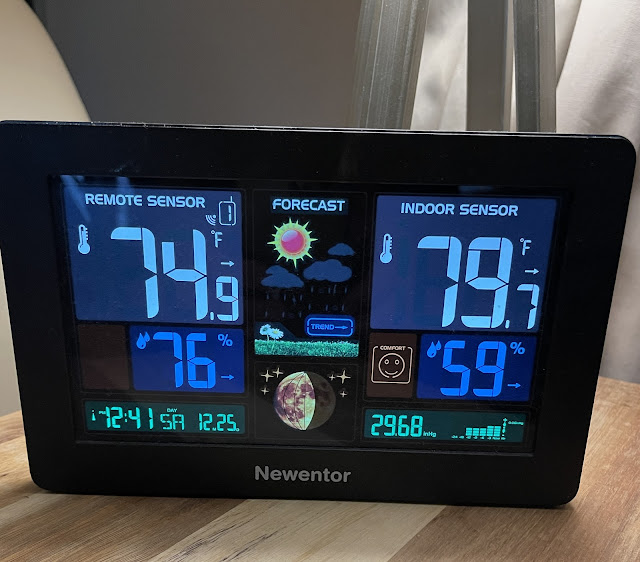 Yes, I snapped this photo just as we returned to Phannie, and we hadn't left the air conditioners on. That's why it reads 79 degrees inside. There are any number of different models of these, ranging from very simple to a full weather station, so it's sort of whatever floats your boat. I opted for this one, as it has internal lighting, but it doesn't have the complexity of a weather station. I try to keep to a very minimum anything outside the coach that has to be put away or disassembled for departure, and the outside array of a weather station does not fit that laziness profile. Besides, all I really care about is the temperature inside and out. The humidity is also mildly interesting. Bottom line is that I'm happy with this one.

I think we all have things that annoy us, perhaps more than they should. Mine is a vacuum cleaner with a cord.  We have had both corded and cordless ones and hated them all--until now. At more than $400.00, I swallowed hard and ordered this Tineco cordless vacuum, and I must tell you that it is worth every penny.  It is so well crafted that it could be called the Rolls-Royce of cordless vacuums. It has a powerful suction and a battery that, well, seems to last forever. I highly recommend it if you are willing to pony up the bucks for the best. 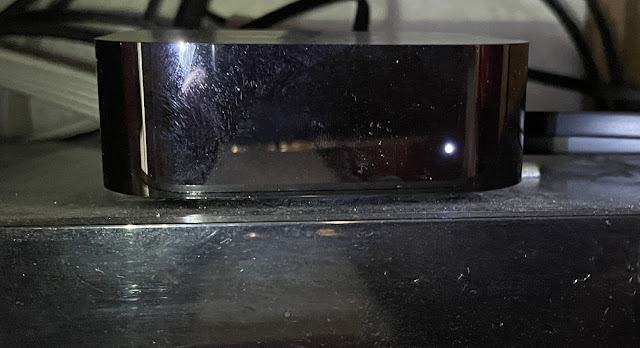 It may be a little difficult to tell what this is, but it represents streaming, which is the future of television. It doesn't really matter whether you get the Apple product, the Fire Stick or Roku; they all seem to work pretty well. I got the Apple TV because it just seems better built and more innovative.  After I ran the cost numbers of our Direct TV satellite service versus getting the same thing plus a lot more by streaming, the choice was easy. The dish has retracted onto the roof for the last time (I'm going to keep it in case a future owner might want it), and the satellite receiver boxes have been returned to Direct TV. We have 100 GB of wi-fi streaming available from an AT&T hotspot and unlimited from our Verizon hotspot and T-Mobile through our phones, so we can get unlimited streamed TV from just about anywhere. We never go anywhere where cell service isn't available so, with all three networks, we're pretty well set at a cost a good deal less than the satellite feed.

I hope you enjoyed this change of pace from my surgery diary; I know I did. Until next time, here's wishing you a happy New Year and a prosperous and healthy 2022!