As this is the end of the fourth week since surgery, and life is becoming more normal every day, this will be the last post in this series.  I don't know how many people recuperate from this surgery in an RV but, if it provides some insight for anyone, I will be happy.

So what can I do now--a week or so later?  Well, these may not sound all that significant, but when your world is centered around your knee and becoming more mobile, small things get gold stars, in my book. Taking note of them is sort of like climbing a ladder (not that I will be doing that); climbing to the next rung is a big deal.

I suppose the biggest gold star goes to...walking with some normalcy. It seems like only days ago that I was struggling with a walker, slowly and carefully making my way along, painfully, as if I thought the new knee could break at any moment. I remember climbing Phannie's stairs for the first time, sitting on my behind and using my arms and "good" leg to push me upward. I probably could and should have done it the normal way, but I still wasn't trusting this alien device that replaced the knee God gave me. And now, I can walk up and down the stairs normally--something I couldn't do before surgery. Thank goodness I still have the original left knee--doc said it's in slightly better shape than the right one was. I still can't imagine having both knees replaced at the same time, as some people do; my hat is off to them. In terms of walking at four weeks, this is going very well; in fact, I have jettisoned the walker and my cane, which was the walker's successor. On my first day of outpatient therapy, the therapist noticed that I was limping because there was still a small bit of pain remaining. The therapist immediately called me on it, saying that it had probably become mostly habit (it had), and I was not to do that on the next visit. Huh? That sounded a little harsh but, as I mentioned before, I know these people. They are wonderful and necessary, but I can't help but think they would keep smiling as they were strapping me in the gas chamber. Sure enough, I simply forced myself to walk normally and, by my next visit, I was walking normally with no pain. (I said normally, but it's a new normal. I don't yet have full control over my new knee, so occasionally my foot goes somewhere slightly that I hadn't intended for it to go, but that's getting better every day.)

Smaller gold stars:  1) Getting in the shower and stepping over the raised threshold easily; 2) no need to hold on to something while in the shower; 3) dressing myself with no assistance. (My right sock was the last obstacle, and I conquered it this morning.) 4) Cooking; I cooked lunch today with little assistance by Sandy. I should add that washing dishes afterward was just too taxing. I don't think I'm ready for that yet.

Here's a biggie:  Driving the car, which I first did yesterday, just around the block. Getting in on the driver's side was very different, but relatively easy with a little help in guiding my right leg with my hands. Once in position, I was surprised that I had to relearn slightly the location of the pedals. It was as though my right knee had no idea what its role was, so I had to move my foot several times from brake to accelerator in order to teach it their locations and functions. Once my knee figured it out, I had no difficulty pushing the pedals as usual.

One of the best gold stars goes to sleeping through the night without being drug-induced and the ability to sleep on my side--another first.

There are probably other things I don't remember that signal a return to normalcy, but it's safe to say that I am thrilled that my progress is speeding along. Fortunately, the dark memories of those first two weeks after surgery are fading, but they'll be back whenever I come back for the other knee's replacement. Don't worry, I'm not going to post about that; this series was quite enough.

Oh wait!  One more thing: My pain medicine completely wiped out my appetite, so I dropped more than 20 pounds--that I really needed to lose--during these first four weeks. However, I'm not taking any prescription pain meds now, and my appetite is returning. I'm going to try to stay motivated to keep control of it.

Since I haven't taken any photos (I don't think anyone wants to see my scar), I'll see if I can find another favorite from our travels.

Below is our second RV, a Jayco fifth wheel, purchased in 2005. It was actually the second because the first one we kept for less than a day. It was a bumper-pulled Jayco that I knew wouldn't work for us when I pulled it off the lot with our Suburban. So I turned around, took it back, and went looking for a Dodge diesel truck to pull the fifth wheel we bought instead: 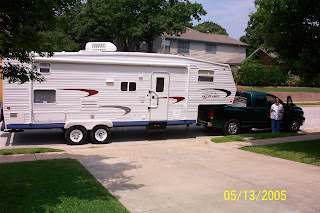 We were such newbies that we obviously didn't know what we were doing. We came to hate the inside layout of this one, and you'll notice from the photo that it had only one air conditioner. Where do we live? Texas. However, we bought another, much nicer, fiver soon afterward, and it served us well until we found Phannie. Sometimes you just don't know what you don't know.