After a nice breakfast, we started preparing Homer for the final leg home. As one of the last little chores, I added to our U. S. map on Homer's door the states of Arkansas, Oklahoma and Missouri. This is a cool way to chronicle visually our travels in Homer, and it was thoughtful of the Barkers to purchase it for us as a gift after I had admired the one on their trailer. 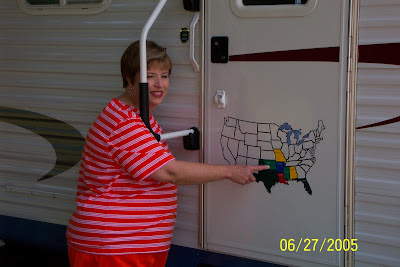 The leg home was uneventful, except it was depressing to see the outside temp gauge in the Hornet slowly climb to 99 degrees as we neared Texas. I'm not sure we'll be going anywhere else this summer; it's just too darned hot! Sandy and I have always wondered what a fall or spring vacation would be like. She could never take one at those times of year when she was teaching. Now that she's retired, I'm sure we'll be trying it. Summer travel from now on will likely be to places where we can find some cool weather. I guess that pretty much limits us to the very northernmost states or the mountains or Canada. We're already talking about going to Maine next summer.
Posted by Mike Mills at 11:39:00 PM