Our good friends, Brent (Bubba) and LouAnn Barker, have had a fifth wheel for some time and are veteran RVers. When we bought Homer (as the fifth wheel is affectionately known), we talked about taking a trip together and decided on Branson, Missouri. Sandy and I have visited Branson several times, and we always enjoyed ourselves immensely. The Barkers hadn't made the trip before, and LouAnn allowed how she would really like to go. Two of the Barker children—Jeff, 18, and BreAnn, 6, would be going, and we assured them they would have a wonderful time because of all the family-friendly things to do around Branson. LouAnn was worried that, at the time we were going, there were no big-name entertainers appearing in Branson. We assured her that most of the shows would have very talented performers and besides, most of the stars we grew up with are either dead or retired! After some vacillation, she decided to go anyway.

We knew that for the trip to click, we would need a few common attributes among the two families: 1) flexibility; 2) an easygoing nature; and 3) rejection of the notion that one has to get on the road early in the day. So far, we think we have aced all three of these. If we had any doubt, it dissolved when the Barkers departed their home in Keller SIX HOURS later than Bubba had advertised on this, the first day of the caravan. Friends, we're talking 4:00 p.m. off the launch pad! I don't think we'll ever feel sheepish again about our noon departure on our first day of our RV travel last month.

One of the things we learned from our first trip was that we don't want to try to retrieve Homer from storage and get it stocked for the trip on the day of departure. So, on the Friday before our departure for Branson on Saturday, I got off work early, intending to go get Homer and do at least some of the trip prep that evening. Unfortunately, a tragic illness had struck Elvis, our beloved old cat, and we had to say goodbye to him. It was not a very good start of our vacation. By the time it was all over, no one was in the mood to do anything with Homer, so we decided to wait until Saturday morning to get started on getting started.

Things went a good deal easier this time, because 1) we had gained some experience from our first trip and sorta knew how everything worked; 2) we had left aboard Homer much of the non-perishable stuff that we stocked it with when it was new, so we didn't have to fret over where to put things in the storage compartments; and 3) Sandy had developed a remarkably simple but practical system of containerizing the items that have to be shuffled between Homer and the house each time we travel. This model trailer is equipped with a queen bed in front, a full bed in the rear, and a twin-sized bunk bed over the full bed. We knew that we would rarely, if ever, have need for the bunk bed, so we bought Homer with the Sandy's idea of removing the mattress and using its tray-like frame for storage. We then bought four large and two small plastic tubs (at Wal-Mart, where else?) and stocked them with the all non-hangup clothing, towels, cosmetics, hygiene products, etc. needed for the trip. Then, when we finish a trip, we carry the tubs—along with the dirty clothes hamper—into the house, where Sandy applies highly secretive laundry techniques and restocks the tubs, at her leisure, for the next trip. When we're ready to go again, we just park Homer in front of the house and load up the tubs. The system works like a charm, and it really cuts down on the guesswork and the number of trips between Homer and the front door of the house.

We also cut back on the amount of foodstuffs that we packed for the trip. We found that breakfast is the only meal we often cook in Homer, so we stock the fridge with food for breakfast meals for several days plus snacks and sandwich makings for other occasions we are in Homer at mealtime. Since we eat out a great deal for entertainment, we've found there is no need to take along a whole pantry and fridge full of food. Besides breakfasts of eggs, bacon and sausage, we often make tuna salad, tacos, chili, soup, hot dogs, hamburgers, steaks, baked potatoes and salads for those times when we don't eat out. We also stop at roadside vegetable and fruit stands along the way, so we have no shortage of stuff to graze on all the time.

One thing I am faithful in doing to prepare Homer and the Hornet (as the pickup is affectionately called) for the trip is adjusting the tire pressures to the correct values which, I'm told, is very important for the proper handling of the rig and the longevity of the expensive tires. All the tires carry high air pressures—70 psi for Homer and 55-65 for the Hornet—and they slowly lose pressure over time and have to be pumped back up. I bought an AC electric compressor that is a little smaller than a shoebox to take care of this chore. It works fine, but it is a bit slow, taking about 45 minutes to do all eight tires. I usually need to do this only at the beginning of a trip, making a cursory pressure check about halfway along to make sure everything is holding up.

We do all the pre-launch preparation while the rig is parked, truck hooked to trailer, at the curb in front of the house. It would be nice to have a yard large enough to park Homer and take care of its servicing at my leisure, but then, I would have to have a big yard, and I don't like big yards—I've been there and done that, and I don't like all the bondage. I'm not at all unhappy with this arrangement.

Around noon, we decided to go ahead and depart on the leg to Texarkana, taking some of the pressure off the Barkers who, undoubtedly, were racing around like crazy. They seemed relieved that we were going ahead. Now I know why Bubba insisted on stopping for the first night at a place that's less than 200 miles from Dallas! The trip went without a hitch, so to speak, and we made a required stop at Mary of Puddin Hill in Greenville, Texas. This is a not-so-little family-run sweet shop that has been around forever, famous for their chocolates and fruitcakes. They have a large mail-order business, and their store is a must for travelers who want a wonderful and tasty snack while taking respite from the road. They have lots of samples of their goodies, and it would be difficult for anyone to leave without buying something. Also don't miss their peach lemonade and iced tea. 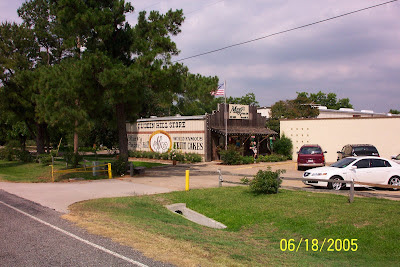 Mary of Puddin' Hill in Greenville 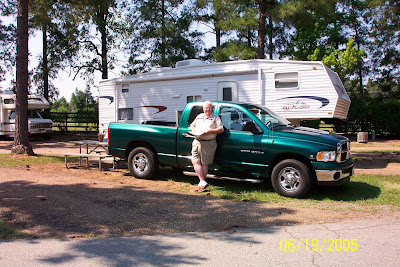 Our arrival at the KOA on I-30 in Texarkana was uneventful. The park was clean, shady, and average priced, with good cable TV. We had a pull-through spot, so parking was easy. After getting set up for the night, we went to nearby Bryce's cafeteria, a hands-down favorite of ours forever. The place has been in business for 75 years in Texarkana and is one of the few cafeterias anywhere that has been able to translate home cooking quality into the massive quantities required to feed the public at a large restaurant. I won't even go into the details of this heavenly place, but a few examples are in order: Fresh—not frozen—green beans, oozing with bacon grease and chunks of smoked ham for seasoning; real mashed potatoes, with a well full of brown gravy so good, you could drink it; an endless variety of pies—so wonderful, you'd swear your grandmother cooked them herself. Only the Casa Linda Cafeteria in Dallas approaches—but does not quite equal—the tastiness of the food here at Bryce's.
Posted by Mike Mills at 11:13:00 PM