We were sorry to have to leave Hot Springs, because there is so much that we were unable to see in such a short visit. We broke camp and headed for McClard's Barbeque which, to my complete devastation, I found to be closed on Mondays. McClard's is an institution in Hot Springs, having resided unchanged on Albert Pike Road since time began. They do barbeque very, very, very well. After several minutes staring at the empty restaurant in utter denial, I was finally able to move on, stopping at an alternative BBQ joint, Stubby's, on Central Avenue, which was sufficiently good that it took away a little of the sting of disappointment over missing the McClard's adventure. Sandy and I shared the Ultimate Combo Plate for $13.95, and it was way more than we could possibly eat. We gave the excess to Bubba, who is always a reliable disposal unit. We topped off the meal with a homemade peach fried pie, which was wonderful. 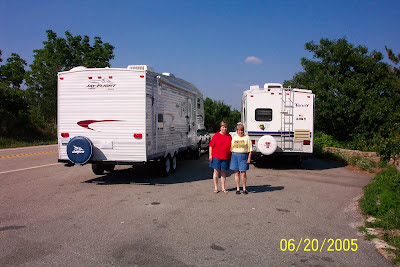 Homer on the Left, Bubba's rig on the right 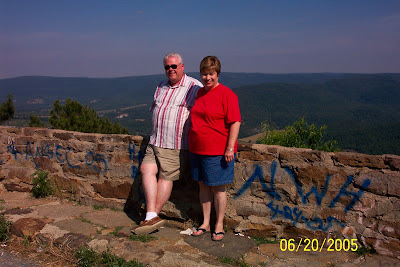 Sandy & Mike in the Ozarks 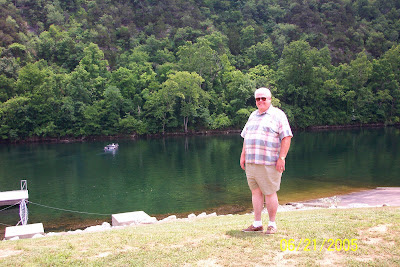 
The drive to Branson took us through more beautiful Ozark mountain scenery, and we arrived at the Cooper's Landing RV park to find a nice shady back-in spot; well, actually, all of the spots are shady; this is a very nice park situated on the shore of Lake Taneycomo. Several of the parking spots back right up to the steep lakeshore, but these always seem to be full, as one might imagine. This lake is just downstream from Table Rock Dam, which impounds the gorgeous Table Rock Lake, known far and wide for its clear, clean and deep water. Taneycomo, renowned for good trout fishing, is just downstream from a trout fish hatchery, where the young trout thrive until they are released into Taneycomo, fed by cold water discharged from Table Rock Lake. Cooper's Landing is average priced, with good TV cable, and would be especially attractive to fishermen.
Posted by Mike Mills at 11:29:00 PM